Data has shown that a lack of information for hearing consumers can result in confusion, distraction, and a negative impression of the Deaf consumer (Jones, 2017). This chapter explains the importance of education for consumers that supports their understanding of working with interpreters, which is called orientation to the interpreted interaction or consumer orientation. Readers are encouraged to consider how various approaches to consumer orientation can incorporate elements of the Function, Expectations, and Inclusion (FEI) model, who might be responsible for conducting orientation, when it could take place, and how different options fall on a decision-making spectrum. Activities for students developing their understanding of orientation to the interpreted interaction are included.

Interpreters work in a variety of spaces with consumers from all walks of life. In just one week an interpreter might encounter dozens of consumers. Some will have familiarity with working with interpreters, and some will be novices. Regardless of their experience, some consumers will quickly pick up on how to effectively and respectfully communicate with people who use a different language, while others will struggle.

What Happens When Orientation is Omitted?

Recent studies have demonstrated the importance of consumer orientation by examining the impact on consumers when orientation is omitted. Jones (2017) conducted a study of 357 hearing North Americans who are not fluent in American Sign Language (ASL). As part of the survey, participants were asked to watch a video of a presentation in ASL while listening to an interpretation of the message in spoken English, and then provide both qualitative and quantitative responses to questions that were intended to gauge their impression of the presenter. The survey did not introduce the presenter or the interpreter and did not include an orientation that would tell participants what to expect. Almost half (44%) of participants’ open-ended responses indicated feelings of confusion or distraction while watching the video (p. 58). Furthermore, those who indicated feelings of confusion or distraction gave the presenter lower-than-average scores in all ten soft skill categories- professionalism, friendliness, knowledgeability, confidence, intelligence, communication skills, trustworthiness, competency, authoritative, and likability (p. 59). Figure 1 shows the average rating in each soft skill category as well as ratings from participants who were confused and/or distracted and ratings from participants who were not confused and/or distracted. 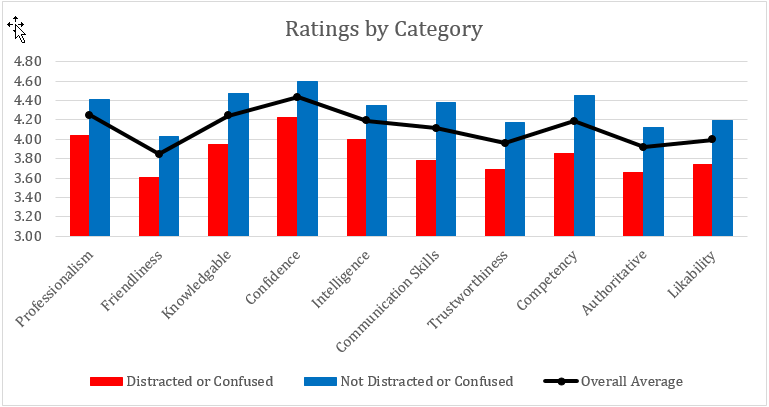 These findings are important because they suggest that a lack of orientation can set the interpreter and the consumers up for failure. The data indicate that regardless of how engaging the people are, how insightful the content of the message, or how accurate the interpretation, when consumers are busy trying to figure out what the heck is going on they are less able to engage and attend to the message. In this scenario, everyone involved in the interaction has the potential to be impacted. The hearing consumer may feel confused about the process and has missed out on the content of the message. The Deaf consumer may have picked up on cues that they were not heard and wonder why. The interpreter may feel unsatisfied with their work because they could feel that something was missing but they are not sure what it is.

The hearing consumer’s impression of the Deaf consumer is equally important. The soft skills measured in this study have a direct impact on career success and can make or break whether someone gets a job offer, has access to upward mobility, and experiences success in their workplace. The data suggests that regardless of the Deaf person’s expertise and the interpreter’s skill, a lack of consumer orientation may have a negative impact in all of these areas.

Why do Consumers Need Orientation?

While many aspects of interacting with another person are unchanged by the presence of an interpreter, the experience can still throw consumers for a loop. Consumer orientation is an important topic to consider because research has shown that hearing consumers often misunderstand the interpreter’s job, their relationship with the Deaf person, and how to work with interpreters effectively (Hsieh, 2010; Kredens, 2017; Metzger, 1999).

In one example of this, Leeds (2009, as cited in Llewellyn-Jones & Lee, 2014) surveyed doctors’ clinics in the United Kingdom. In spite of the fact that the clinics who participated in the study all held contracts with an agency that was providing fully qualified interpreters, when asked who was interpreting for their Deaf patients, 54% “thought the person accompanying the patient was a ‘friend’, 15% a ‘carer’, and 8% a ‘social worker’” (p. 43).

Why Have Best Practices Not Been Developed?

In spite of the fact that interacting with consumers is an integral part of what interpreters do, very little has been written about this interaction outside of the process of interpreting the message. No standards or best practices have been established for the education of consumers or the interpreter’s part in this. One likely reason for this is that interpreters feel constrained by their ethical codes and the myth of invisibility.

It is commonly understood that when the Registry of Interpreters for the Deaf (RID) was established in 1964, many interpreters had been approaching the work from a paternalistic ‘helper’ or caretaking approach. In response to this, a Code of Ethics was developed, and the inevitable pendulum swing led to interpreters being characterized as “conduits” or “machines” in an attempt to respect the autonomy of Deaf consumers (Witter-Merithew, 1999, p. 2). Even though subsequent models of interpreting have moved away from this impersonal approach to the work, research has shown that interpreters still employ specific techniques in an attempt to appear invisible (Witter-Merithew, Swabey, & Nicodemus, 2011; Hsieh, 2010).

Interpreters’ attempts to remain invisible can be further supported by a conservative interpretation of the current Code of Professional Conduct (Registry of Interpreters for the Deaf, 2005). Tenet 2.5, for example, advises that interpreters “refrain from providing counsel, advice, or personal opinions” (p. 3) and tenet 3.5 says that interpreters should “conduct and present themselves in an unobtrusive manner” (p. 3). Several influential researchers have agreed that a literal reading of these tenets discourages interpreters from interacting with consumers (Dean & Pollard, 2005; Llewellyn-Jones & Lee, 2014; Witter-Merithew et al., 2011).

All of this is not to say that interpreters do not have the best of intentions. There is a fine line between interacting appropriately in order to improve communication access and inserting one’s self to the point of impeding consumers from participating in the interaction themselves. To further complicate things, this line moves dramatically from one scenario to the next and depends upon who the consumers are. For this reason, the models and discussions of consumer orientation in this chapter are meant to allow maximum flexibility. Application will depend on the interpreter’s judgment, the needs and preferences of consumers and other stakeholders, and a myriad of other factors that vary from one assignment to the next.

Effective consumer orientation includes three elements: Function of the interpreter, Expectations for what the interaction will be like, and Inclusion for all parties (FEI). Depending on the setting and the consumer, each element may be touched on briefly or may be expanded upon in more depth. Regardless of whether the orientation to the interpreted interaction takes ten seconds or ten minutes, these three elements can be included.

Function: How will the interpreter function in the context of this interaction?

Expectations: What can the consumer expect when working with an interpreter? How might this experience differ from a typical monolingual interaction?

Inclusion: What can be done to ensure the interaction is inclusive and satisfactory for everyone?

Who Should Conduct Consumer Orientation?

It is important to recognize that the interpreter is not always the appropriate person to conduct the orientation to the interpreted interaction. Consumer orientation could be conducted by the Deaf consumer, a hearing consumer, a coordinator or agency, an advocate, or a facilitator. The choice of who should conduct the orientation depends on the individuals involved, their relationships with each other, the power dynamics in that particular situation, timing and availability, as well as other factors. This decision requires communication between the interpreter and the stakeholders, and is best supported by a mutual understanding of the importance of consumer orientation.

Consumer Orientation as a Spectrum

When considering how to conduct consumer orientation, it can be helpful to think of how various options fall on a spectrum. This approach to the work is helpful because there are no right or wrong decisions—any part of the spectrum may be appropriate for different situations.

The first spectrum to consider is a level of formality spectrum (see Figure 2).

Dean and Pollard’s demand-control schema explains that control options, which are potential responses to job challenges, can range from liberal (described as “active, creative, or assertive”) to conservative (described as “reserved or cautious”; 2004, p. 3). An example of a liberal approach to consumer orientation would be arriving at a job early and seeking out the hearing consumer in order to conduct a preliminary orientation. An example of a conservative approach would be omitting the pre-assignment orientation and allowing the Deaf consumer to decide whether to address misunderstandings such as the use of third person language.

The third spectrum is Llewellyn-Jones and Lee’s (2013) presentation of self spectrum (see Figure 4).

Figure 4: Presentation of self spectrum

Again, it is important to note that none of these approaches are automatically right or wrong. Use of these various spectrums can help interpreters analyze their decisions and identify opportunities to expand their options.

When Should Consumer Orientation be Conducted?

For many people, it is easy to assume that consumer orientation should take place just before an assignment begins at the time that the interpreter introduces himself or herself. It is worthwhile, however, to consider other options for when effective orientation might occur. Jones (2018) wrote:

Orientation could take place before the interpreter arrives for a face-to-face interaction—perhaps as part of the assignment booking process or as part of an orientation for newly hired employees at a company where interpreters are frequently used. Likewise, interpreters may finish an assignment and decide that the parties could benefit from further explanation before they meet again. There may be times when an interaction needs to be interrupted briefly to make adjustments that will facilitate communication and make the interaction more accessible to one or more participants.

It is also possible that as awareness of the need for consumer orientation grows, individuals or organizations may develop resources that include pertinent information from the FEI model. Interpreters and other stakeholders (i.e., coordinators, consumers, and agencies) may have the option of referring consumers to these resources before and after assignments.

Consider: Working alone or in a group, choose several potential control options for consumer orientation. List the consequences and resulting demands for each option, then discuss what you notice.

Practice: Using the FEI model and information from the above activities, write out a script for orienting a consumer, then practice introducing yourself and providing this consumer orientation. What information will you share if you have only ten seconds? Thirty seconds? Five minutes?

Colleen Jones is a nationally certified interpreter and presenter from Seattle, Washington. She holds undergraduate degrees from Cal Poly, San Luis Obispo, and Seattle Central Community College, and a master’s degree from Western Oregon University. Colleen’s interpreting work is focused on medical, business, and DeafBlind settings, and she has published research on the topics of gender bias and consumer orientation.

This study was originally published as my Master’s thesis at Western Oregon University. I am forever grateful for the support and guidance of my thesis committee members, Ellie Savidge, Amanda Smith, and Dr. Elisa Maroney.

Kredens, K. (2017). Conflict or convergence? Interpreters’ and police officers’ perceptions of the role of the public service interpreter. Language and Law, 3(2), 65-77.

Registry of Interpreters for the Deaf. (2005). NAD-RID code of professional conduct. Retrieved from https://drive.google.com/file/d/0B-_HBAap35D1R1MwYk9hTUpuc3M/view

Integrated and Open Interpreter Education by Colleen Jones is licensed under a Creative Commons Attribution-NonCommercial 4.0 International License, except where otherwise noted.