From the origin of poetry until the middle of the 19th century  almost all poems were written in formal verse (sometimes called “closed form”), meaning that they all had a set rhythm, meter and rhyme.  These forms might look quite different, ranging from the the 14-line, two-stanza Petrarchan sonnet to the 3-line, 17-syllable haiku to the strangely interlocking villanelle or pantoum.   Most of us grew up on formal poetry:  ballads, sonnets, haiku, and cinquains, just to name a few. We learned to equate poetry with rhyme, and some of us still feel awkward when we encounter  poems lacking this element.

Formal poetry requires that individual words and sentences conform to a set pattern of rhythm, meter and rhyme.  This can be quite tricky, as the poet must balance meaning (let’s say she’s trying to describe homesickness) with form (she needs a n eight-syllable line that ends with a rhyme for alligator). Formal poetry presents an obstacle course for the poet to run through as gracefully as possible. Done well, formal poetry is magical.

The vast majority of formal poems have a set, steady beat, which we call rhythm. Most of these poems also have a set number of accented beats per line, which is called meter.  Finally, most formal poems rhyme in consistent although sometimes complex patterns. They may repeat lines or stanzas in a set pattern.  All of these things help determine the type of formal poetry we are reading.

The Varieties of  Formal Poetry

There are many, many types of formal poetry; in this chapter, we will look take a deep dive into one of the most celebrated forms in the English language: the sonnet.   Consisting of fourteen lines of iambic pentameter, the sonnet can employ a variety of rhyme schemes.Although early sonnets almost always take love as their subject, later sonnets examine everything from _________ t _____________.

Sonnets generally have a volta, or “turn.,  where the sonnet suddenly switches direction  and the poet seems to be saying one thing and then suddenly starts saying another.  The volta may bring about the answer, at the end of a sonnet, to the question being asked. Or it may occur where a false claim is replaced by a true claim, as in Michael Drayton’s Sonnet 61 in which he tells us in the first part of the poem, “I’m so glad we broke up,” and in the second, “But can we get back together.”

Credit for the invention of the form is given to the Italian poet Giacomo de Lentino in the 14th century, but Francesco Petrarca (1304-1374), created one of the two most common sonnet forms, the Petrarchan or Italian Sonnet. This sonnet is broken into two stanzas: an eight-line octave and a six-line sestet. Its rhyme scheme is usually  abbaabba cddcee, although it also sometimes uses  cdedce for the final six lines. The volta generally appears at the point where the octave–which introduces a problem–divides from the sestet, where the solution to the problem is presented.

Here is an example of a Petrarchan sonnet:

Sonnet 19: When I consider how my light is spent

by  John Milton
When I consider how my light is spent,
Ere half my days, in this dark world and wide,
And that one Talent which is death to hide
Lodged with me useless, though my Soul more bent
To serve therewith my Maker, and present
My true account, lest he returning chide;
“Doth God exact day-labour, light denied?”
I fondly ask. But patience, to prevent
That murmur, soon replies, “God doth not need
Either man’s work or his own gifts; who best
Bear his mild yoke, they serve him best. His state
Is Kingly. Thousands at his bidding speed
And post o’er Land and Ocean without rest:
They also serve who only stand and wait.”
In this sonnet, you’ll note the iambic rhythm (every other syllable is stressed) and the pentameter meter (8 stressed syllables per line).   You’ll also notice that there is an octet, which presents the problem–Milton is asking, how should I spend my talent?–which is then resolved in the sestet (or volta):  God does not need your gifts

The other main sonnet form is the Elizabethan or Shakespearean.  Unlike Italian,  English is a rhyme-poor language, which allows for a greater number of rhyming words with its abab cdcd efef gg rhyme scheme.

Shakespeare followed the rhyme scheme in all his sonnets—which are the most famous in English. Although it has fourteen lines of rhymed iambic pentameter., the form is different, and it’s less likely to be about the unrequited love of a man for a woman. Here’s  Shakespeare’s Sonnet 73:

That time of year thou mayst in me behold
When yellow leaves, or none, or few, do hang
Upon those boughs which shake against the cold,
Bare ruin’d choirs, where late the sweet birds sang.
In me thou see’st the twilight of such day
As after sunset fadeth in the west,
Which by and by black night doth take away,
Death’s second self, that seals up all in rest.
In me thou see’st the glowing of such fire
That on the ashes of his youth doth lie,
As the death-bed whereon it must expire,
Consum’d with that which it was nourish’d by.
This thou perceiv’st, which makes thy love more strong,
To love that well which thou must leave ere long.
This sonnet is also written in iambic pentameter, with the Shakespearean rhyme scheme of abab cdcd efef gg.  THe “gg” lines, known as a “Shakespearean couplet,”  are where the volta occurs.

So that the meaning doesn’t interfere with the understanding of the form, here’s a paraphrase:

When you look at me you could think about the very end of autumn, when maybe a few last yellow leaves or maybe none at all hang on the boughs of the trees that are shaken by the cold wind.

Or when you look at me you think of the end of the day, after the sunset fades in the west, just before night comes to seal up life in a death-like sleep.

Or when you look at me you see an almost burnt up fire, a fire that has consumed its fuel, and the very substance that nourished it, the way that people consume themselves by burning up their youth.

You see these things when you look at me, and they make your love for me stronger, because you know I will not be around much longer.

Many modern poets have embraced the  possibilities of the sonnet form, some sticking true to its rigid rhythm and rhyme, while others experiment and stretch what it can do.  Here are two examples of modern sonnets that push the boundaries of the form. 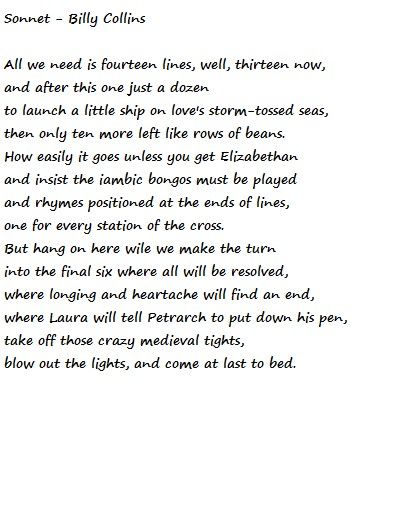 The less we paid, the more we climbed. Tendrils
of smoke lazed just as high and hung there, blue,
particulate, the opposite of dew.
We saw the whole court from up there. Few girls
had come, few wives, numerous boys in molt
like me. Our heroes leapt and surged and looped
and two nights out of three, like us, they’d lose.
But ‘like us’ is wrong: we had no result
three nights out of three: so we had heroes.
And ‘we’ is wrong, for I knew none by name
among that hazy company unless
I brought her with me. This was loneliness
with noise, unlike the kind I had at home
with no clocks running down, and mirrors.

Here are links to more sonnets, some famous and not so famous.

Thomas Wyatt, “The Long Love, That in My Thought Doth Harbor” (Links to an external site.)

Sir Philip Sidney, “Sonnet 14 [Alas, have I not pain enough…]” (Links to an external site.)

William Shakespeare, “Sonnet 29 [When in disgrace with fortune…]” (Links to an external site.)

John Donne, “Holy Sonnet 7 [At the round earth’s imagined corners]” (Links to an external site.)

John Milton, “When I Consider How My Light Is Spent” (Links to an external site.)

WIlliam Wordsworth, “Scorn Not the Sonnet” (Links to an external site.)

John Keats, “On the Sonnet,” (Links to an external site.)

Elizabeth Barrett Browning, “Sonnet 43 [How do I love thee?]” (Links to an external site.)

Robert Frost, “Acquainted with the Night” (Links to an external site.)

“Never Again Would Birds’ Song Be the Same”

Edna St. Vincent Millay, “Love Is Not All, It Is Not Meat nor Drink”

E. E. Cummings, “next to of course god america i” (Links to an external site.)

Gwendolyn Brooks, “The Rites for Cousin Vit” (Links to an external site.)

ENG 106 by Leigh Hancock; Candace Bergstrom; and Alan Lindsay is licensed under a Creative Commons Attribution 4.0 International License, except where otherwise noted.