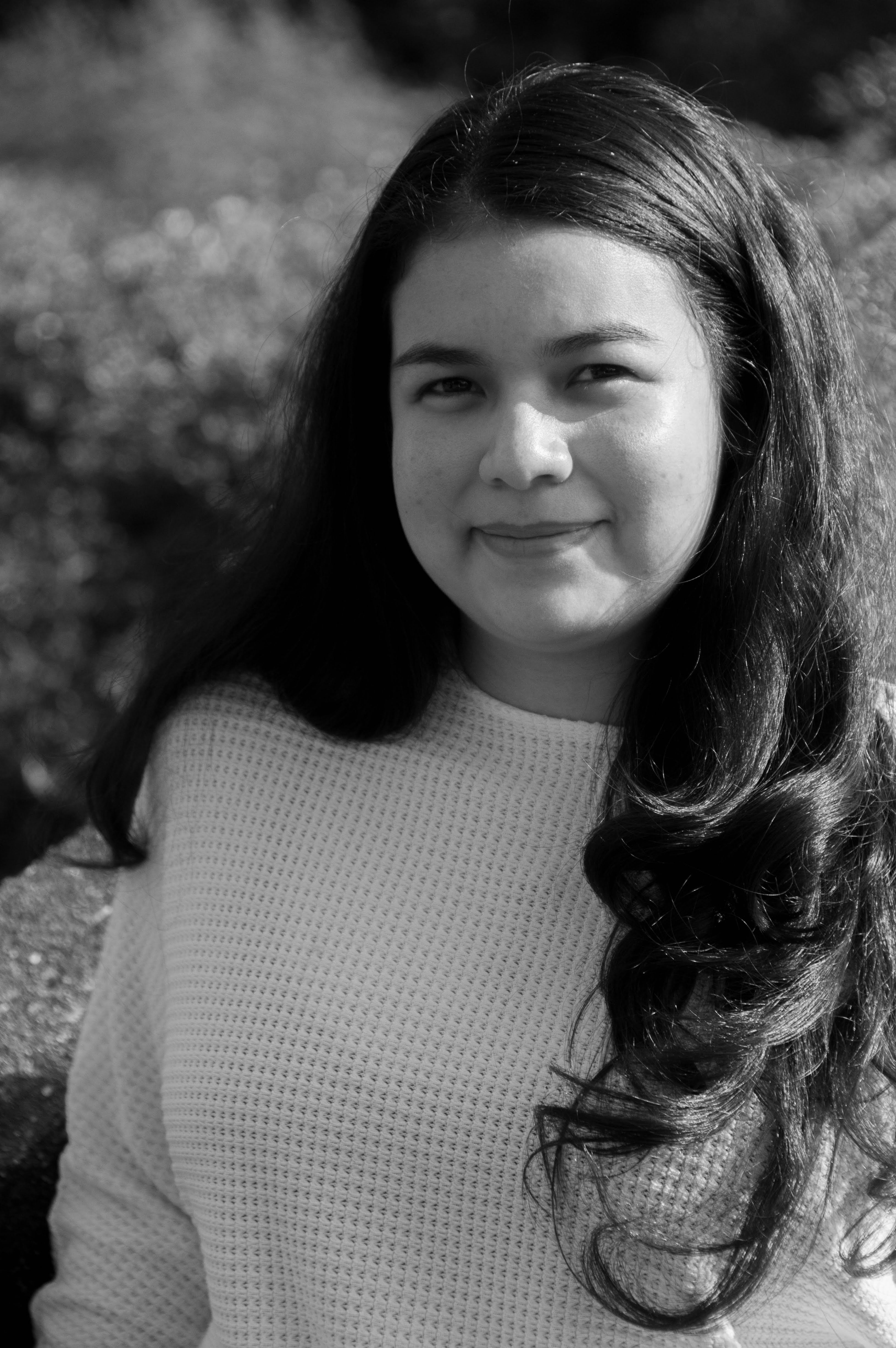 I am from Santa Ana, El Salvador.  I like it because it is a small city where we all know each other.  We all say “Hi, good morning” to everyone.  Everyone is kind and I like that.  I have family there.  I have one brother and one sister. I didn’t know my mother’s parents, so I just knew my grandparents who are my father’s parents.  I have three uncles and four cousins.

My mom worked in a factory and my father lived here in Portland since I was seven months old. I lived with my mom and my dad sent money back home. My mom’s factory made clothes.  She worked a lot.  I just saw her at night. My older sister cared for me when I was young. When I was a kid we lived in my grandparents’ house for about five years.  Then we moved to another house.  It was not too big, just three rooms.  We had two dogs. I was always busy at school. My favorite subject was economics.  I also liked to study computers. My school was a public school and all the kids from the neighborhood went to that school.

My dad decided to come to the United States because he had problems with money.  He worked with shoes and then he didn’t have work and so he needed to pay for things.  He owed people money, so that’s why he decided to come work in the United States.  It was hard for my mom.  We don’t have the closest relationship with my father.  It was so hard. It is hard to talk about my father.  My mom worked so much.  Sometimes he didn’t send money and those were really hard times.

El Salvador is a place that a lot of people think is very dangerous.  But I think that if you live there, you can see some things that are beautiful.  The nature and the people are beautiful, but yeah, some places are dangerous.  They say that it is one of the most dangerous countries.  I saw some things, not too bad.  I didn’t see so many bad things.  In my city it wasn’t too dangerous.  Some of my classmates were in gangs.  We knew they were in a gang because of the people that they spent time around.  There are two different gangs and they fight each other.

My family was very religious and so my brother grew up in a religious environment and he is pretty smart, so I wasn’t worried about him joining a gang.  I think the worry was that something would happen to him.  It is hard sometimes to visit friends. The gangs would control the different areas.  I felt afraid crossing into their territory.  Some kids were stuck inside.  The gangs fight a lot. One gang is called Mara Salvatrucha (MS) and the other is 18th Street.

I was eighteen when I came to the United States. I was studying economics in my country but then we had to move here.  I came to the US with my brother and my mom.  It was an organization who helped us.  It is called IOM, International Organization for Migration. A friend of my father told him about it so my father contacted them and they contacted us.  We had to pay for a test to see if my father was my real father.  We traveled to the capital city and we couldn’t bring a lot of things.  We did a lot of interviews and health screenings with the organization and with the US government. We got a refugee visa because of the dangers in El Salvador. It cost us a lot of money.  We had to pay for the flight.  We flew to Miami and then to here. It took a long time.

Sometimes I talk about this with my family and I can remember that I was not excited, but not sad.  At first it didn’t feel real.  When I first got to the United States I was surprised by the weather. When we first got here it was snowing and I had never seen snow.  I like snow. I don’t like the hot weather.  I think the people here are very kind and nice.  In El Salvador we spent more time with our family.  Here people work and work.  People are busy. My mom and I work in a restaurant. It is a Mediterranean restaurant.  My mom is washing the dishes and cutting the vegetables.

My sister stayed in El Salvador. She is not married, but she lives with her boyfriend. I miss my friends and my family in El Salvador.  I have not been back, but I would like to visit.  I think that they say that we can travel to other places in the world, but not El Salvador.  When we get permanent residence we can.

We don’t live with my dad.  We haven’t seen him since last year. We just lived with him for three months when we first came. He has a work permit.  When he first came, he came without papers.  He came through Mexico in 1999.  He never talked about that.

I think the problem in El Salvador is the government.  We have a president who promises a lot of things and he has a lot of good ideas, but before we had presidents who were imprisoned because of stealing money.

I think my parents were affected by the civil war in the 1980s.  My grandparents sent my father to a private school because in the public school they would take kids for the army. My grandparents were with the FMLN (Frente Farabundo Martí para la Liberación Nacional), not with the government.  They weren’t fighters, but they weren’t supporting the government.  My mom said that when she was a kid, her family had some fighting where they lived and they saw people killed.  My teachers told us about it.  My teacher knew a woman who was in the resistance and he told us many horrible things about the war.

I am not sure if I want to become a US citizen.  I think this is a good place, but I miss my country.  I haven’t thought about this very much.  If El Salvador were more safe, I think I would go back.  I have only been here two years.  I think my mom likes it here because she was worried all the time in El Salvador.  She was worried about the guns.  When we went to school she was always worried.  If we didn’t arrive on time at home, she was looking for us. Other kids did get hurt.  One of my friend’s fathers was robbed.  I knew people who did get hurt or killed.  One of my friend’s dad was killed by a gang.  Some of them did something, but sometimes they just went to the wrong place or sometimes they were wearing the wrong shirt or shoes.  It was mostly boys.  I know some girls who were hurt.  I know my mom was worried about me.  Two or three times they stole my phone.  But they didn’t kill me. The IOM worked with people in El Salvador because they heard about how the country was dangerous.  They talked with us and asked questions.

I think that El Salvador would be less dangerous if there were more jobs.  There is a problem in El Salvador that there are no jobs.  Many people left the country. The family wasn’t together.  The boys spend time with the wrong people because they aren’t with their family doing things.  The problem started a long time ago. 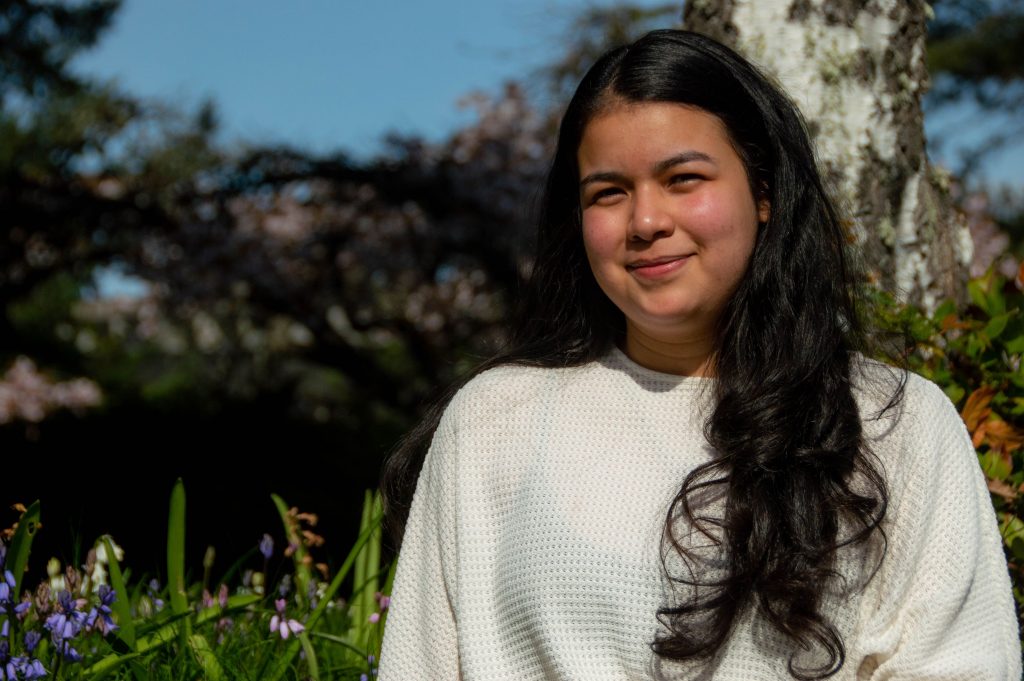 I did one year here in high school, at Tualatin High School. In high school I knew a lot of people who didn’t understand.  I didn’t have friends or people to talk to.  It is normal because they don’t know how homesick I feel. When I finished high school I came to PCC to start in level five of ESOL. I’m interested in studying anthropology. I think I will start anthropology classes next year.

I want people to know some of the best things about El Salvador.  I love the food.  My favorite are the pupusas.  I like the ones with beans and cheese. I also like the natural places; they are very pretty.  I like the people, too.  I think that in Latin culture people are very close. The people are friendly here, but it isn’t a relationship.