Most of us are familiar with the labrador retriever dog breed, such as the chocolate lab seen in Figure 8. But have you ever thought about what makes this dog brown? The difference between brown and black coat color in dogs is caused by a mutation in the TYRP1 gene. The TYRP1 gene provides instructions for making an enzyme called tyrosinase-related protein 1. This enzyme is required to produce a pigment called eumelanin. Eumelanin is a dark colored pigment.

Table 1: Variations in the TYRP1 allele that lead to brown color in dogs. Data from Schmutz, 2002.

All of these variations in the DNA sequence are predicted to cause a change in the amino acid sequence of the TYRP1 protein. These changes affect the production of eumelanin pigment, which is black in color. When eumelanin is not being produced correctly, the dog appears brown instead of black.

Remember that genotypes can be abbreviated with a single letter and that the letter which is chosen is typically the first letter of the dominant trait. In this case, the letter “B” is used to represent the dominant black allele, while “b” represents a recessive brown allele.

Remember: dominant does not mean “better” or “more normal”. Black color does not confer any special advantages on dogs compared to brown color. It’s just a difference.

Let’s visualize the inheritance of black and brown using a pedigree. The pedigree in Figure 11 shows a litter of puppies. The shaded symbol shows a brown puppy, while open symbols are black individuals.

To interpret this pedigree, let’s start with information that we already know:

Figure 12 shows the same pedigree, but with information about the individual’s genotypes filled in.

We can also show the cross between these parents as a Punnett square (Figure 13). We would expect 1/4 of the offspring to have the genotype bb, and that is what we see in the pedigree above.

A small number of mutations in the TYRP1 gene have been found to cause oculocutaneous albinism type 3. This condition includes a form of albinism called rufous oculocutaneous albinism, which has been described primarily in dark-skinned people from southern Africa. Affected individuals have reddish-brown skin, ginger or red hair, and hazel or brown irises. Two TYRP1 mutations are known to cause this form of albinism in individuals from Africa. One mutation replaces a protein building block (amino acid) in tyrosine-related protein 1 with a signal that prematurely stops protein production. This mutation, written as Ser166Ter or S166X, affects the amino acid serine at protein position 166. The other mutation, written as 368delA, deletes a single DNA building block from the TYRP1gene. Other alterations in this gene have been reported in a few affected people of non-African heritage. Most TYRP1 mutations lead to the production of an abnormally short, nonfunctional version of tyrosinase-related protein 1. Because this enzyme plays a role in normal pigmentation, its loss leads to the changes in skin, hair, and eye coloration that are characteristic of oculocutaneous albinism. 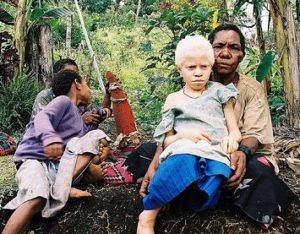 Information about TYRP1 and oculocutaneous albinism type 3: “Tyrp1” by Genetics Home Reference: Your Guide to Understanding Genetic Conditions, National Institutes of Health: U.S> National Library of Medicine is in the Public Domain