1. A 50 year-old tree has a 20” DBH.  A second 50 year-old tree of the same species has a 36” DBH.  What are some possible reasons for the difference in the diameter of these trees even though they are the same age?

2. A Douglas-fir is cored at DBH, resulting in a ring count of 36.  What is the tree’s estimated total age?

3. Estimate the age of the core sample illustrated below.

4. A young tree is illustrated below.  Count the whorls to estimate its total age. 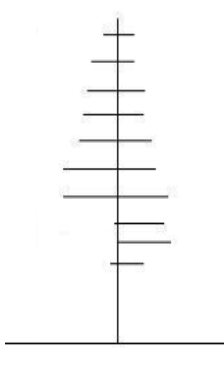 5. Would core samples from all sides of the tree result in the same ring count?  Why or why not?  (Hint:  Consider trees on slopes, wind patterns, coring angles and false whorls.)

1. The key to remember here is that tree diameter is a function of crown volume.  So any growing condition that would result in a greater crown for one tree, would also result in a larger diameter for it.  These conditions might include: a) more physical growing space for the larger tree; b) greater access to light, nutrients, water and other necessary plant resources; c) a genotype (genetic makeup) more suited to the growing conditions present or less palatable to animals, insects or pathogens; or d) activities of neighboring trees over time that resulted in more favorable growing conditions.

2. For Douglas-fir, generally add seven years to a core sample to obtain total age in a stand that appears to have naturally regenerated.  This number would increase if it appeared the tree was stagnated under shade for much of its early life (10-12 yrs) or decrease if it was planted from nursery stock and grew in full sunlight (4-5 yrs).

3. Assuming the lines on the drawing represent the dark summer wood, or latewood, on the tree, they indicate the end of the growing year. Therefore, there are 14 rings present; the shaded one at far left being the bark.  This also assumes that the center shaded area on the far right is the pith and first year’s wood. If the core sample had not hit the pith, the pith area would need to be reconstructed, drawing circles as described in Field Techniques number 10

4. The whorls and knots indicate 10 years.  Add three-four years to that for the time it took the tree to grow to the first knot, and the total estimated age would be about 13 years.

5. Core samples do not vary widely from one side of the tree to the other, but it is possible for differences to be present.  These may result from off-center piths or inconsistent coring directions (due to a tree’s position on a slope, subjectivity to strong winds, or tendency to grow toward a light source).  Rot or fire scars may destroy evidence of rings. In addition, false rings do not always extend all the way around the tree.

Forest Measurements by Joan DeYoung is licensed under a Creative Commons Attribution 4.0 International License, except where otherwise noted.