Another model of justice was developed by Samuel Walker who attempts to demonstrate how cases move through the system and may be treated differently by media and society. This model referred to as the Wedding Cake Model Theory, is unique because it differentiates types of crimes by how serious the offense is, the offender’s criminal record, and the victim and offender relationship. [1] It is referred to as a wedding cake because of the different tiers or layers on a cake. Take a moment to glance at the wedding cake image below and notice that wedding cakes often have different layers and the bottom tends to be the largest with the top being the smallest. This section will explain what each layer would resemble in the criminal justice system. 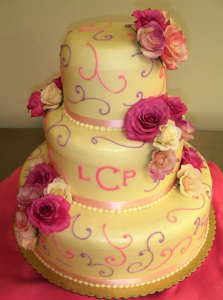 We are going to work our way from the bottom of the cake, or the most significant piece, to the smallest piece on top. In the criminal justice system, the bottom layer of the model would represent the most significant number of cases handled by the system, which often includes misdemeanors and traffic violations. This layer may also get comprised of first-time offenders of less severe crimes. [2] Misdemeanors are the least dangerous types of crimes which can include, depending on where location, public intoxication, prostitution, graffiti, among others. Imagine getting caught tagging a park wall and never being caught for a crime before, which is where this crime would fall. These are often the crimes most of us have committed, but also most of us may not have been caught or punished. A misdemeanor may result in a monetary fine, rather than jail time.

If a person were speeding five over on the interstate, it is unlikely they would get pulled over, or spend time in court. They are likely to pay the fine which admits guilt. However, if they cannot afford the fine, it would require them to go to jail, which brings in a whole host of other issues. The bottom layer of the cake often does not require a person to go to trial because most people with minor crimes are given and accept plea bargains. If one were to go to jail for a misdemeanor, it is typically for less than one year.

When we previously talked about crime control resembling an assembly line, this tier would be an example of that: people get cited for everyday violations, people pay their fines rather than go to court, by paying fines they admit guilt, and their interaction with the system will end. These crimes are the ones that are seen as so common newspapers will rarely report on them. How often would you like to read about someone getting cited for speeding ten mph over? Or being arrested for small possession of marijuana? Although most of these are common marijuana arrests have increased alongside legalization in the U.S. they are annoying to read about from https://www.forbes.com/sites/tomangell/2018/09/24/marijuana-arrests-are-increasing-despite-legalization-new-fbi-data-shows/#43134be64c4b

The second tier, or next layer, is comprised of lower-level felonies that may be violent or non-violent. Again, many of these cases end in a plea bargain and do not end in significant jail or prison time. [3] However, they consume a significant amount of the courts’ time. For example, Oregon has three different levels or classes of felonies. Class A is the most serious and can result in up to 20-years imprisonment, Class B can result in up to 10 years imprisonment, and Class C is the least serious with up to five years. [4] The second tier would be comprised mostly of Class C felonies.

The third tier is comprised primarily of what most of us know as serious felonies that tend to be violent and involve offenders with significant criminal histories. In this tier’s cases are more likely to go to trial if the offender pleads not guilty, and if found guilty, will result in prison time. As stated in the Oregon example, this would most likely be Class B Felonies and maybe some Class A felonies.

Lastly, the top tier often referred to as celebrated cases, would be the smallest part of the cake and would be made up of the high-profile cases that tend to be profiled by the media. If found guilty, offenders could receive significant punishments which may include life imprisonment or the death penalty. The top tier is less common than the others, but it is also the crime we like to think of as really bad. It is also the cases that garner a lot of news time, and perhaps it is a case that made it to the United States Supreme Court. Therefore, the media may glorify these cases, especially if it is a well-known cases like O.J. Simpson, Bernie Madoff, Kobe Bryant, Michael Jackson, Jeffrey Dahmer, and Ted Bundy. Most people know about these cases, and it may have struck fear into the public, but again, these are garnered more attention because they are uncommon, committed by people who are famous, or shock the public consciousness.

Our society is so obsessed with the celebrated cases that we often talk a lot about them, cover them extensively on the news, and live in fear because of them. Students in a class that are pro-death penalty often say, “I reserve it for all the Ted Bundy’s in the world.” They are rare, but we fear them! Take this news link that shares images of his last meals on death row.

The Wedding Cake Model theory not only helps us better understand the operation of the criminal justice system but also how our perceptions of crime and criminality can be skewed by what gets reported in the news. It is uncommon for us to hear or read reports on the most common types of crimes, the bottom tier. When we get bombarded with the crimes that are more at the top, celebrated cases, we may begin to think that is the reality.

Find a case for each tier of the wedding cake model in the news and write up a 500 word summary of where it fits and why. Lastly, discuss how it may get influenced by our extensive coverage of rare, yet essential news cases.

1.11. Wedding Cake Model of Justice by Shanell Sanchez is licensed under a Creative Commons Attribution-NonCommercial-ShareAlike 4.0 International License, except where otherwise noted.