Modern deterrence theory is perhaps the most dominant philosophy of the American criminal justice system. Deterrence theory tries to change a person’s behavior through laws and punishments. As a form of social control, there is a belief that perceived punishments will serve as a warning of possible consequences, which would hopefully deter the person from committing the crime. There are two types of deterrence: general deterrence and specific deterrence. General deterrence uses punishment to deter crime among people in the general population. It uses punishment as an example for those people not punished. For example, capital punishment can serve as an example to other would-be offenders if they were thinking about murder. Specific deterrence uses punishment to reduce the crime of particular persons. The effect of the punishment depends on the nature of the punishment and who is punished.

News Box. In 1994, Oregon voters passed Measure 11, whcih established mandatory minimum sentencing for several serious crimes. Besides removing the judge’s ability to give a lesser sentence, Measure 11 prohibited prisoners from reducing their sentence through good behavior. Additionally, any defendant 15 years old or older who was accused of a Measure 11 offense was automatically tried as an adult. Recently, the Oregon Justice Resource Center reported the effects of Measure 11 on juveniles, esepcially minorities. Below are links to the news article and the report itself.

After reading the above box and hyperlinks, please explain why many juveniles are not deterred from committing serious crimes in Oregon.

Classical ideology was the dominant paradigm for over a century, but it was eventually replaced by positivist approaches that seek to identify causes of criminal behavior. However, classical ideology had a resurgence during the 1970s in the United States. Neoclassical theory recognizes people experience punishments differently, and a person’s environment, psychology, and other conditions can contribute to crime as well. Therefore, crime is a choice based on context. Many crime-prevention efforts used classical and neoclassical premises to focus on “what works” in preventing crime instead of focusing on why people commit criminal acts.

Cornish and Clarke (1986) proposed a Rational Choice Theory to explain criminals’ behavior.[1] They claimed offenders rationally calculate costs and benefits before committing crime and assumed people want to maximize pleasure and minimize pain. The theory does not explain motivation, but instead, it expects some people will always commit a crime when given the opportunity. They do not assume offenders are entirely rational, but they do have bounded rationality. Bounded rationality is the constraint of  both time and relevant information; offenders must make a decision in a timely fashion with the information at hand. Offenders cannot wait forever nor can they wait for more information before committing a crime. For example, if you were walking down a street and noticed an open window in a parked car, you may contemplate looking in. If you saw something inside, you may then consider stealing it. An entirely rational person may look around to see if there are any witnesses, try to determine if the owner is coming back soon, and so on. Ideally, you may wait until nightfall. However, you may miss your opportunity. Thus, you need to make a quick decision with the relevant facts at that time.

That was an example of a “crime-specific” model. All crimes have different techniques and opportunities. Additionally, they assume all crime is purposeful with the intention to benefit the offender. To dissuade offenders, Rational Choice Theory emphasized the significance of informal sanctions and moral costs. The theory advocates for a situational crime prevention approach by reducing opportunities. Reducing opportunities is much easier to manipulate and change compared to changing society, culture, or individuals. Ultimately, situational crime prevention strategies try to crime a less attractive choice.

Another neoclassical theory is Routine Activity Theory. Cohen and Felson (1979) claimed changes in the modern world have provided more opportunities for offenders.[2] Since the conclusion of World War II, more people have entered the workforce, and more people spend time away from home. Cohen and Felson stated that three things must converge in time in space for a crime to be committed – a motivated offender, a suitable target, and the absence of a capable guardian. 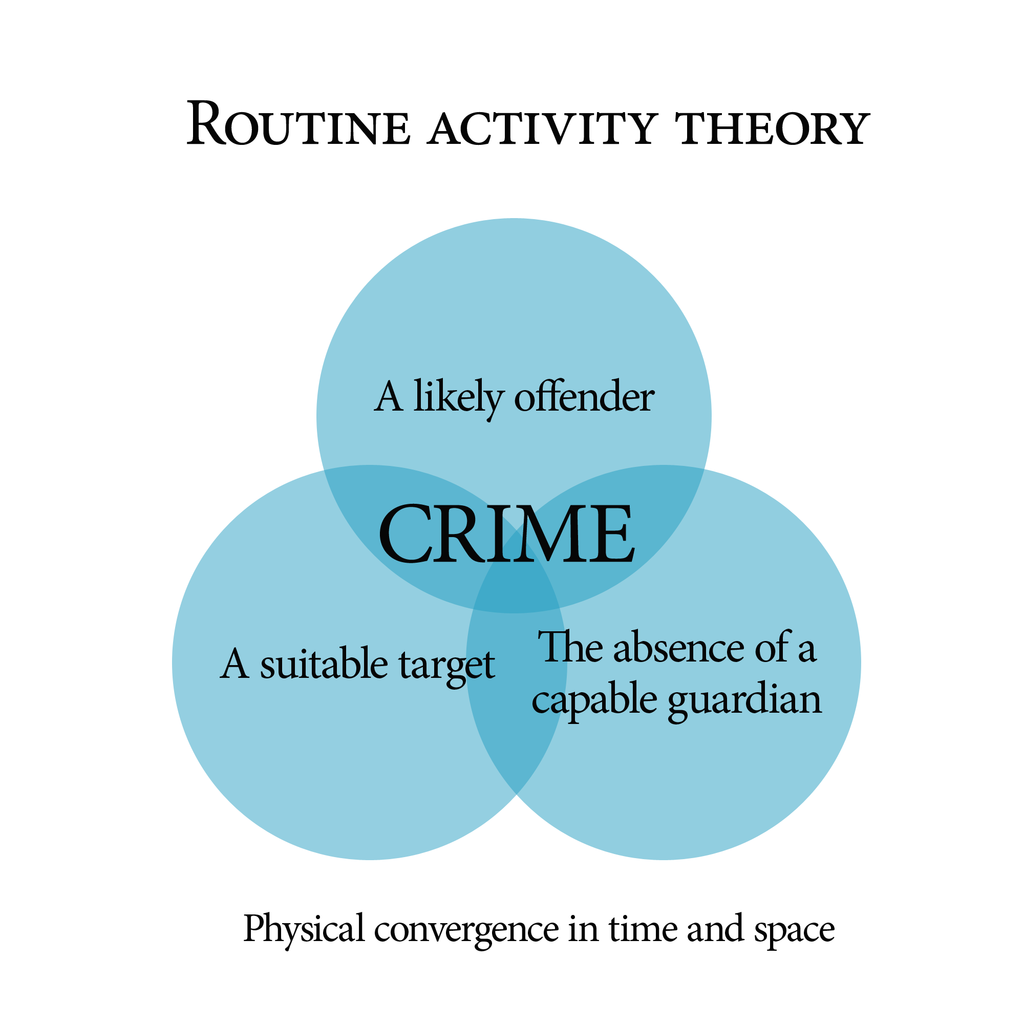 The motivated offender is considered to be a given as there will always be people who will seize opportunities to commit criminal offenses. Besides, there a variety of theories to explain why people commit a crime. Suitable targets can be vacant houses, parked cars, a person, or any item. In reality, almost anything can be a suitable target. Finally, the absence of a capable guardian facilitates the criminal event. What can serve as a “capable” guardian? A plethora of people and things can serve as a guardian. For example, police officers, security guards, a dog, being at home, increased lighting to allow other people to see, CCTV, alarm systems, and deadbolt locks can each reduce opportunities by serving as a capable guardian. Routine activity theory concentrates on the criminal event instead of the criminal offender.

5.5. Neoclassical by Brian Fedorek is licensed under a Creative Commons Attribution-ShareAlike 4.0 International License, except where otherwise noted.