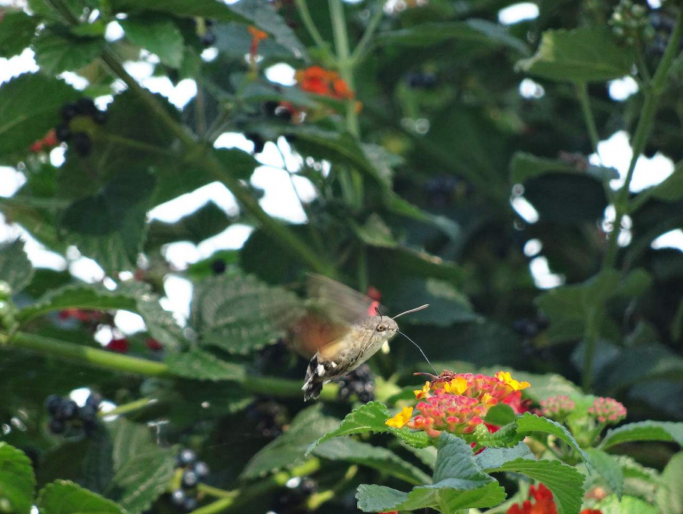 “It is one of the more striking generalizations of biochemistry …that the twenty amino acids and the four bases, are, with minor reservations, the same throughout Nature.” – Francis Crick

All amino acids have the same basic structure, shown in Figure 2.1. At the center of each amino acid is a carbon called the and attached to it are four groups – a hydrogen, a carboxylic acid group, an amine group, and an R-group, sometimes referred to as a variable group or side chain. The α carbon, carboxylic acid, and amino groups are common to all amino acids, so the R-group is the only variable feature. With the exception of glycine, which has an R-group consisting of a hydrogen atom, all of the amino acids in proteins have four different groups attached to them and consequently can exist in two mirror isomeric forms.

The designations used in organic chemistry are not generally applied to amino acid nomenclature, but a similar system uses L and D to describe these enantiomers. Nature has not distributed the stereoisomers of amino acids equally. Instead, with only very minor exceptions, every amino acid found in cells and in proteins is in the L configuration. 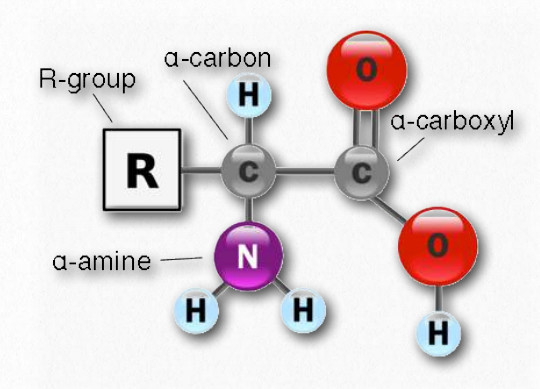 There are 22 amino acids that are found in proteins and of these, only 20 are specified by the universal genetic code. The others, selenocysteine and pyrrolysine use tRNAs that are able to base pair with stop codons in the mRNA during translation. When this happens, these unusual amino acids can be incorporated into proteins. Enzymes containing selenocysteine, for example, include glutathione peroxidases, tetraiodothyronine 5′ deiodinases, thioredoxin reductases, formate dehydrogenases, glycine reductases, and selenophosphate synthetase. Pyrrolysine-containing proteins are much rarer and are mostly confined to archaea.

Some amino acids that are normally nonessential, may need to be obtained from the diet in certain cases. Individuals who do not synthesize sufficient amounts of arginine, cysteine, glutamine, proline, selenocysteine, serine, and tyrosine, due to illness, for example, may need dietary supplements containing these amino acids. 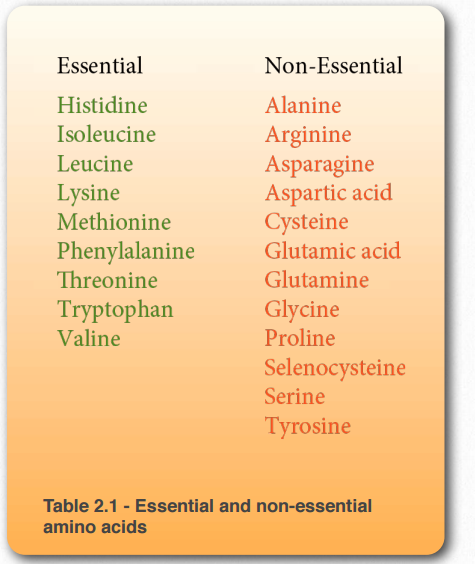 There are also amino acids found in cells that are not incorporated into proteins. Common examples include ornithine and citrulline. Both of these compounds are intermediates in the urea cycle, an important metabolic pathway.

Amino acids can be classified based on the chemistry of their R-groups. It is useful to classify amino acids in this way because it is these side chains that give each amino acid its characteristic properties. Thus, amino acids with (chemically) similar side groups can be expected to function in similar ways, for example, during protein folding. The specific category divisions may vary, but all systems are attempts to organize and understand the relationship between an amino acid’s structure and its properties or behavior as part of a larger system.

Amino acids in this group include:

The small R groups here are more readily packed into tight formations. Proline is exceptional in that it has an R group that folds back and covalently bonds to the backbone of the amino acid, creating a more rigid element in a protein chain that reduces free movement of the polypeptide chain. Additionally, proline can undergo hydroxylation reactions, stabilizing the protein structure. This occurs in collagen with the aid of ascorbic acid (Vitamin C). One symptom of the vitamin C deficiency syndrome ‘scurvy’ is the reduced quality of collagen in tissues, including the skin and gums. This can lead to the deterioration and loss of teeth. 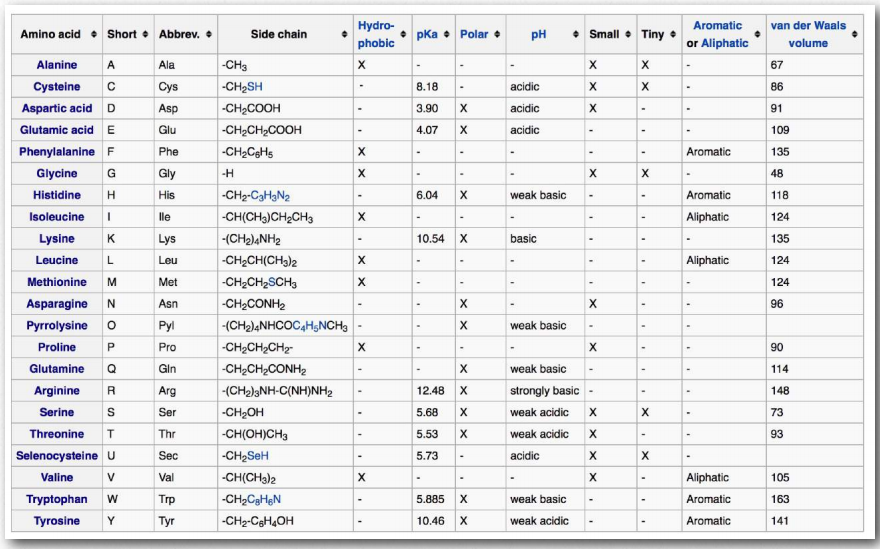 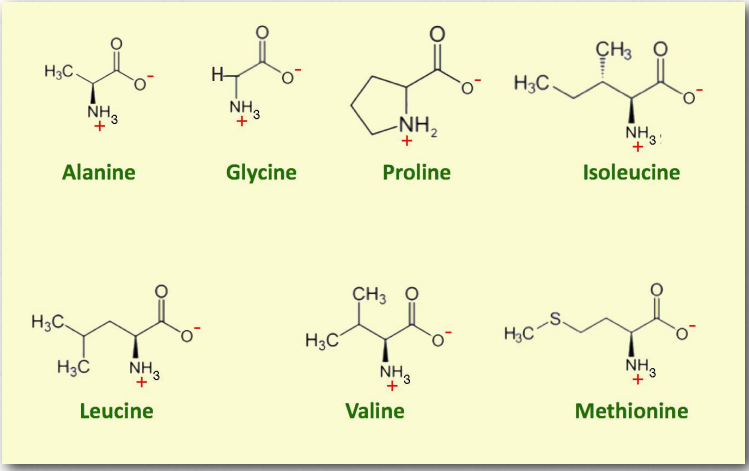 Amino acids in this group include:

These amino acids each contain a carboxylic acid group as part of the variable group. At physiological pH, these groups exist primarily in their deprotonated state. It is easy to be confused if they are drawn in this state, because their names include “acid” while the structure shows no ionizable proton and the charge on the R group is negative.

In addition to its role as a building block in proteins, glutamic acid (with the deprotonated form named “glutamate”) is a neurotransmitter. It also is recognized by a receptor in our mouths, contributing to a taste sensation described as “umami.” Many foods contain appreciable amounts of glutamate that are recognized by our taste receptors, and encourage us to eat these substances. Those foods frequently contain protein that has broken down to some degree: cooked meats, fermented sauces like Worcestershire or soy, tahini, broths, and yeast extracts.

Included in this group of amino acids are:

The variable group in each of these amino acids contains nitrogen, which imparts to the group the ability to exist in protonated and deprotonated states. They are frequently called basic, but also are often drawn in their protonated state which is more prevalent at physiological pH.

Arginine (Arg/R) is interesting due to the fact it is an essential dietary amino acid for premature infants, who cannot synthesize it. In addition, surgical trauma, sepsis, and burns increase demand for arginine and proper healing can require dietary intake.

Histidine contains a nitrogen-containing imidazole functional group that has a pKa of 6. This means it can pick up or donate hydrogen ions in response to small changes in pH. In proteins, histidine frequently has important roles participating directly in reactions involving hydrogen ion transfer.

The R group on lysine is frequently chemically modified in order for it to make unusual linkages to other chemical groups or to take part in specific chemical reactions. Lysine is often added to animal feed because it is a limiting amino acid and is necessary for optimizing growth of animals raised for consumption.

Amino acids with aromatic side chains include:

These amino acids are included in protein structures but also serve as precursors in some important biochemical pathways, leading to the production of hormones such as L-Dopa and serotonin.

The amino acids in this group contain alcohol groups, which can engage in hydrogen-bonding interactions. As part of protein molecules they are hydrophilic and can be oriented outward in watery environments. The alcohol group is subject to chemical reactions or modifications, for instance when carbohydrate groups are covalently linked to proteins. 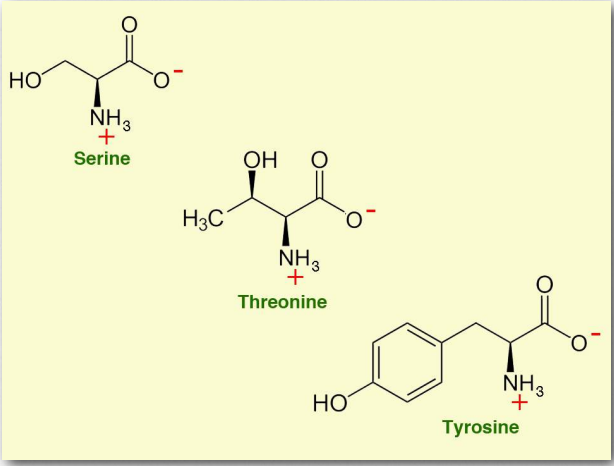 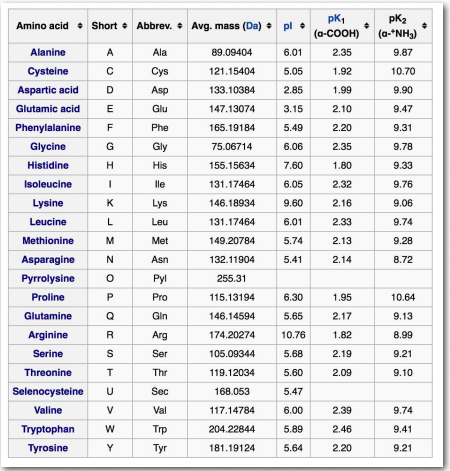 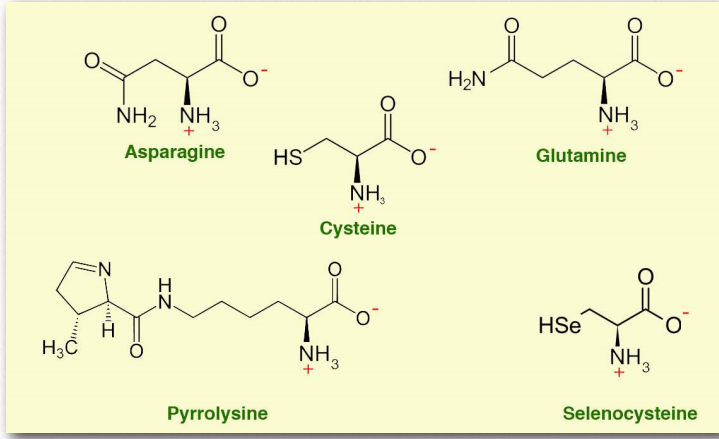 Cysteine, which contains a thiol. Thiols can react with one another via oxidation, forming disulfide links containing two covalently-linked sulfur atoms. Variable groups on methionine in protein chains can undergo such reactions, covalently tying the chains to one another with a short tether. Such disulfide links or bridges restrict the mobility of protein chains and contribute to more defined structures.

Some, but not all amino acids have R-groups that can ionize. The charge of a protein then arises from the charges of the amine group, the carboxyl group, and the sum of the charges of the ionized R-groups. Titration/ionization of aspartic acid is depicted in Figure 2.10. Ionization (or deionization) within a protein’s structure can have significant effect on the overall conformation of the protein and, since structure is related to function, a major impact on the activity of a protein. 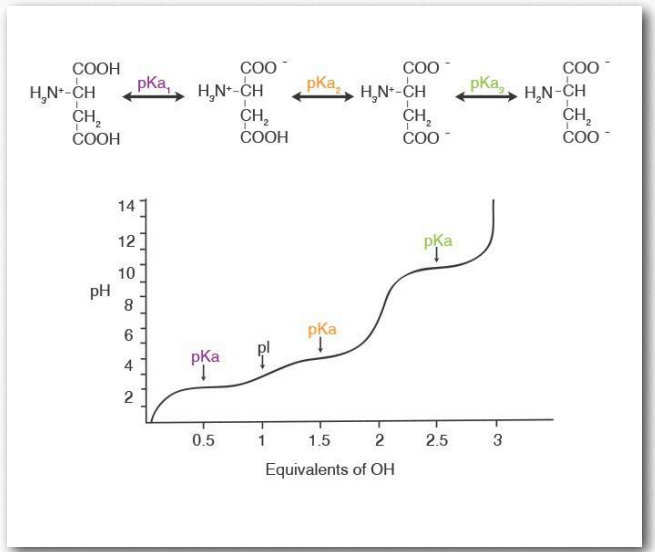 Although amino acids serve other functions in cells, their most important role is as constituents of proteins. Proteins, as we noted earlier, are polymers of amino acids.

Amino acids are linked to each other by peptide bonds, in which the carboxyl group of one amino acid is joined to the amino group of the next, with the loss of a molecule of water. Additional amino acids are added in the same way, by formation of peptide bonds between the free carboxyl on the end of the growing chain and the amino group of the next amino acid in the sequence. A chain made up of just a few amino acids linked together is called an oligopeptide (oligo=few) while a typical protein, which is made up of many amino acids is called a polypeptide (poly=many). The end of the peptide that has a free amino group is called the N-terminus (for NH2), while the end with the free carboxyl is termed the C-terminus (for carboxyl). 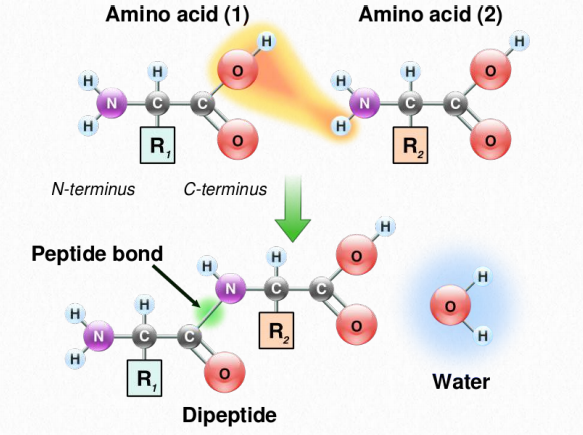 Figure 2.16 Formation of a peptide bond

As we’ve noted before, function is dependent on structure, and the string of amino acids must fold into a specific 3-D shape, or conformation, in order to make a functional protein. The folding of polypeptides into their functional forms is the topic of the next section.