How can enzymes accelerate reactions to this degree? Chemical reactions follow the universal trend of moving towards lower energy, but they often have an energy barrier in place that must be overcome. The secret to catalytic action is reducing the magnitude of that barrier. When the barrier is lowered, the reaction occurs more quickly.

To develop a fuller understanding of this phenomenon, it is worth taking a moment to discuss the concept of equilibrium.

Note that the “equi” part of this word relates to equal, as one might expect, but it does not relate to absolute concentrations. 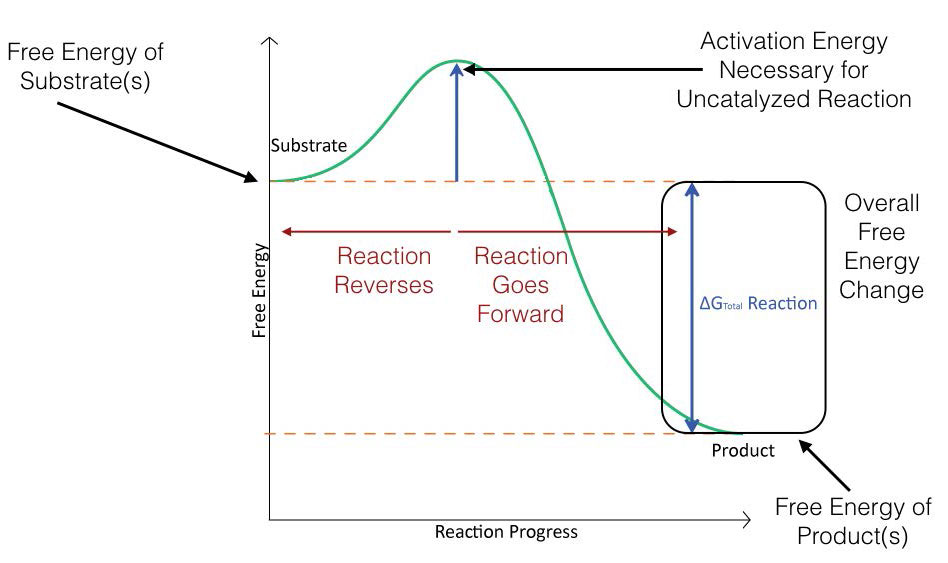 Figure 4.2 – Energy changes during the course of an uncatalyzed reaction. Image by Aleia Kim 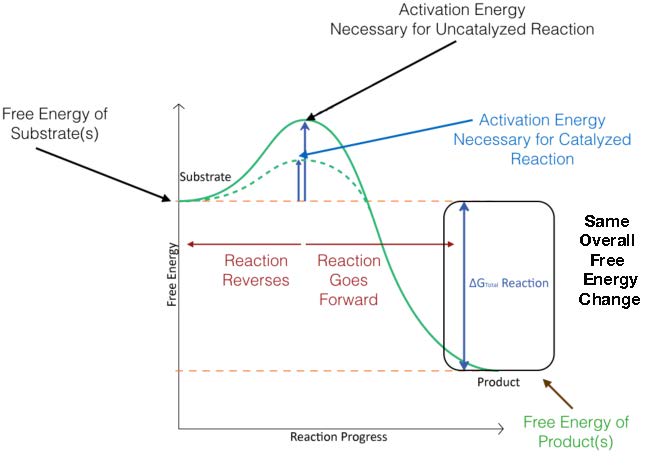 The ratio of products to reactants can be thought of as a ‘goal’ of sorts for the reaction, though of course molecules and atoms are not living things and do not actually have desires. But it is a state that reactions tend toward. When there are alterations to a system at equilibrium, the reaction will proceed in such a way as to restore that equilibrium ratio.

In particular, in biochemical pathways multiple reactions are linked so that the product of one reaction is the reactant in another. As product is drawn away from the first reaction that system moves from its equilibrium state, and the reaction will proceed to convert additional reactant to product in order to work toward the equilibrium ratio.

A few reactions involve such a large energy release (downward drop on the graphs) as to make the reverse reactions nearly impossible. In these cases the equilibrium ratios are heavily skewed toward products.

They are related to the disappearance of a substrate or product of a reaction. Consider the first reaction below which is catalyzed by the enzyme carbonic anhydrase:

When reaction molecules are removed, as they would be if carbon dioxide escaped, the reaction is pulled in the direction of the molecule being lost and reversal cannot occur unless the missing molecule is replaced. In the second reaction occurring on the right, carbonic acid (H2CO3) is “removed” by ionization. This too would limit the reaction going back to carbon dioxide in water. This last type of “removal” is what occurs in metabolic pathways. In this case, the product of one reaction (carbonic acid) is the substrate for the next (formation of bicarbonate and a proton).

In the metabolic pathway of glycolysis, ten reactions are connected in this manner and reversing the process is much more complicated than if just one reaction was being considered.

We have seen now that enzymatically catalyzed reactions are orders of magnitude faster than uncatalyzed and chemical-catalyzed reactions. And that process has been explained using concepts related to energy and equilibrium. But the magic of enzyme catalysis can also be considered from a different point of view: that is, what does an individual enzyme do in order to bring the activation energy barrier on a reaction down?

One of the remarkable things about catalysts is that they are not reactants in the normal sense: they are not consumed during a reaction. In other words, the catalyst ends up after a reaction just the way it started. Enzymes share this property, although in the midst of the catalytic action, an enzyme is temporarily changed. In fact, it is the ability of an enzyme to change that leads to its incredible efficiency.

These changes may be subtle electronic ones, more significant covalent (bonding) modifications, or structural changes arising from the flexibility inherent in enzymes. These kinds of adjustments are not possible for chemical catalysts such as the metal platinum. Enzyme flexibility allows movement and movement facilitates alteration of electronic environments necessary for catalysis. Enzymes are, thus, much more efficient than rigid chemical catalysts as a result of their abilities to facilitate the changes needed to optimize the catalytic process.

Enzymes are large and complicated molecules, which is the structural basis behind this difference. That complexity also means that a huge variety of enzymes are possible, each with a carefully tuned ability to carry out particular reactions with great efficiency and with great selectivity, working only on certain very specific reactants to convert them to particular products.

Substrate binding and the Active Site

Enzymes have binding sites that not only selectively ‘grab’ a reactant (called a when discussing enzymes), but also place it in a position to be electronically induced to react, either within itself or with another substrate.

The enzyme itself may play a role in the electron shifts or that process may occur as a result of substrates being oriented very close to each other.

The location on an enzyme where substrate binds (the ) is also usually the site of the reaction itself, called the .

As large and complex molecules, enzymes are somewhat flexible and responsive to their local environments. Slight changes in shape, often arising from the binding of the substrate itself, help to optimally position substrates for reaction after they bind. 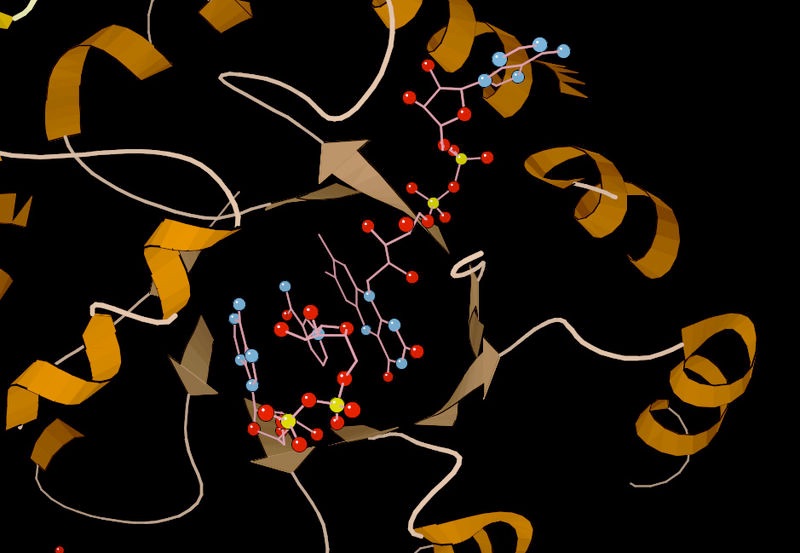 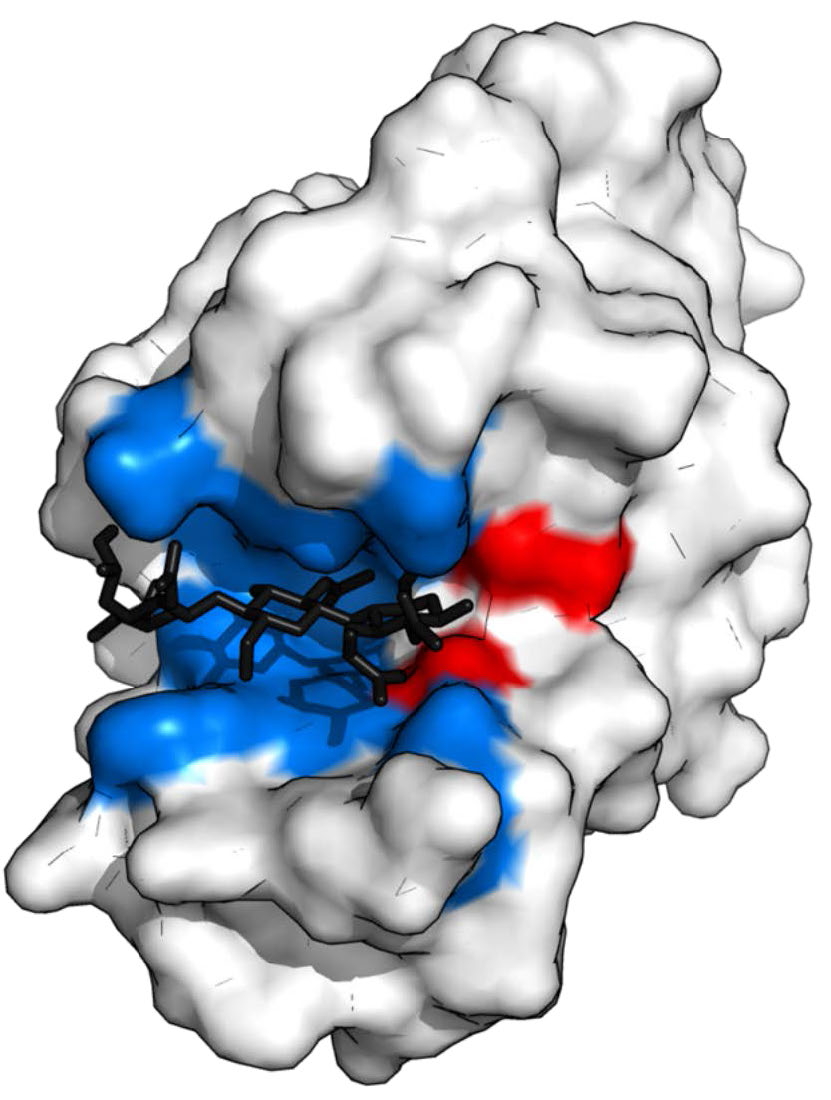 These changes in shape are explained, in part, by the Induced Fit Model of Catalysis (Figure 4.6), which illustrates that not only do enzymes change substrates, but that substrates also transiently change enzyme structure. At the end of the catalysis, the enzyme is returned to its original state. This model contrasts with the Lock and Key model, which presents enzymes with a fixed shape that is perfectly matched for binding its substrate(s). Evidence supports the Induced Fit model as a better, truer description of reality.

Enzyme flexibility also plays an important role in control of enzyme activity. Enzymes alternate between the T (tight) state, which is a lower activity state and the R (relaxed) state, which has greater activity. 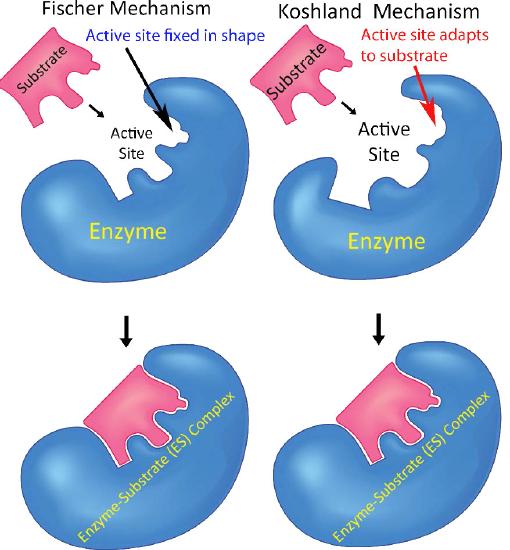 Some enzymes need to bind multiple substrates, for instance if they are catalyzing a reaction where two substrates are covalently linked. For these systems, binding of the first substrate induces structural changes in the enzyme necessary for binding the second substrate. These mechanisms are aligned with the Induced Fit model, where enzymes are able to adjust to the initial binding and thus become more likely to bind the second substrate.

Consider lactate dehydrogenase, the enzyme which catalyzes the reaction below:

This enzyme requires that NADH must bind prior to the binding of pyruvate. As noted earlier, this is consistent with an induced fit model of catalysis. In this case, binding of the NADH changes the enzyme shape/environment so that pyruvate can bind and without binding of NADH, the substrate cannot access the pyruvate binding site.

Enzyme-catalyzed reactions can be of several types, as shown in Figure 4.7. In one mechanism, called sequential reactions, at some point in the reaction, both substrates will be bound to the enzyme. There are, in turn, two different ways in which this can occur – random and ordered.

Organic molecules that assist enzymes and facilitate catalysis are called . The term cofactor is a broad category usually subdivided into inorganic ions and coenzymes. If the coenzyme is very tightly or covalently bound to the enzyme, it is referred to as a . Enzymes without their cofactors are inactive and referred to as . Enzymes containing all of their cofactors are called . 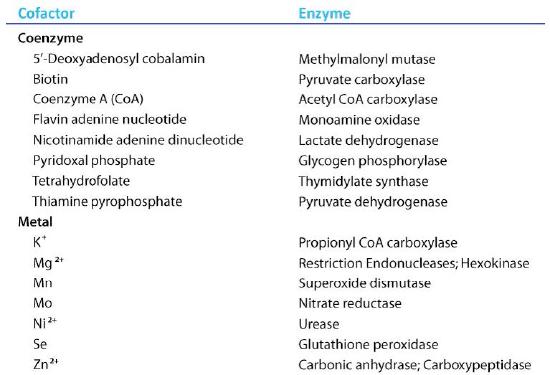 Some coenzymes are derivatives of vitamins. Vitamins are organic molecules necessary in the diet for normal biochemical function. The chemical structures of vitamins are frameworks that an organism is unable to construct on its own, in adequate quantity. Vitamins as we know them (Vitamin A, vitamin D, etc.) are frequently names that refer to small groups of closely-related chemical structures, any of which can serve the role in our bodies.

Vitamins may undergo chemical modification before playing a particular role in a body. For instance, niacin (Vitamin B3) can be chemically converted to nicotinamide adenine dinucleotide (NAD+), a key molecule in energy metabolism.

Vitamins are frequently incorporated into coenzymes such as this. However not all vitamins serve as coenzymes, and not all coenzymes come from vitamins. The term vitamin is derived from ‘vital amine,’ which is a reference to the need for intake in order to live (‘vital’) and their chemical composition as an amine-another reference which includes many but not all of the chemicals in this group.

Among the cofactors listed in the table Fig. 4.27 are many substances derived from vitamins: every substances named in the list of coenzymes contains a large fragment which comes from one of the B vitamins.

Nearly all enzymes are proteins. However some RNA molecules are also capable of speeding reactions.

The most famous of these molecules was discovered by Tom Cech in the early 1980s. Cech was puzzled at his inability to find any proteins catalyzing a process his group was studying in a microorganism named Tetrahymena. Ultimately, the catalysis was recognized as coming from RNA itself. Since this discovery, many other examples of catalytic RNAs have been found. Catalytic RNA molecules are known as ribozymes.

Figure 4.31 – Cleavage of an RNA by a ribozyme. Wikipedia 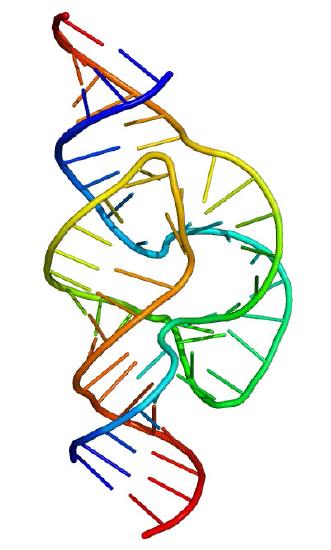 Ribozymes are also important in our understanding of the evolution of life on Earth. They have been shown to be capable via selection to evolve self-replication. Indeed, ribozymes actually answer a chicken/egg dilemma – which came first, enzymes that do the work of the cell or nucleic acids that carry the information required to produce the enzymes. As both carriers of genetic information and catalysts, ribozymes are likely both the chicken and the egg in the origin of life.

The substance on which an enzyme acts, the reactant in an enzyme-catalyzed reaction.

the location on an enzyme where a substrate molecule binds.

the location on an enzyme where the catalysis occurs.

an enzyme without its associated cofactors, which is thus inactive.

an enzyme with all its cofactors present, and thus active.