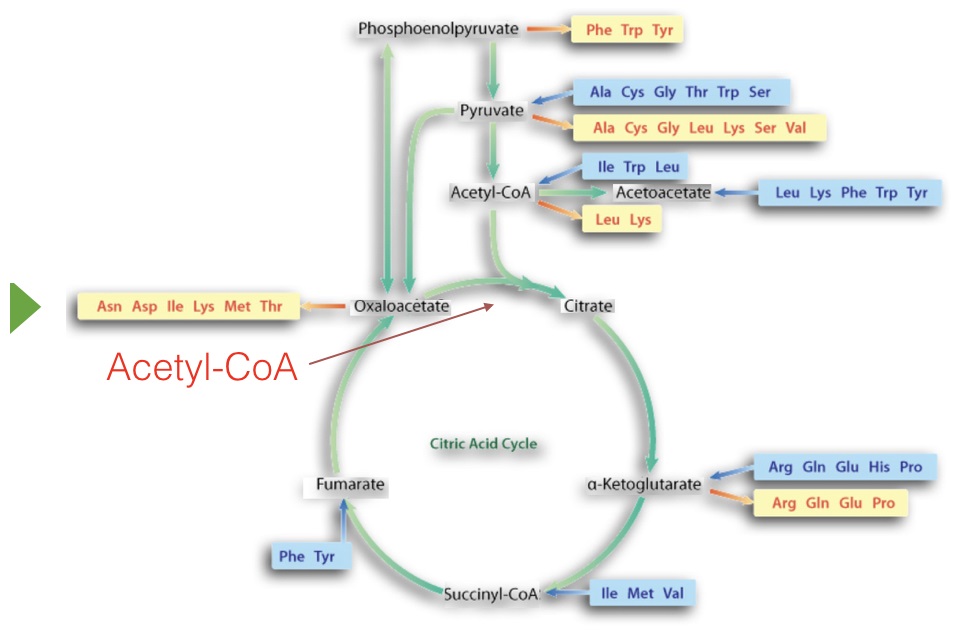 The molecule “feeding” the citric acid cycle by bringing in new carbons is acetyl-CoA. It can be obtained from pyruvate (from the catabolism of carbohydrates via a pathway called glycolysis), from the fatty acid β-oxidation pathway, from ketone bodies, and from amino acid metabolism. It is worth noting that acetyl-CoA has very different fates, depending on the cell’s energy status/needs. In other words, the pathway has branches out as well as multiple materials that can feed in to it. The description below describes oxidation (catabolism) in citric acid cycle.

Before discussing the citric acid cycle, it is important to first describe one important enzyme complex that is a major source of acetyl-CoA for the cycle. 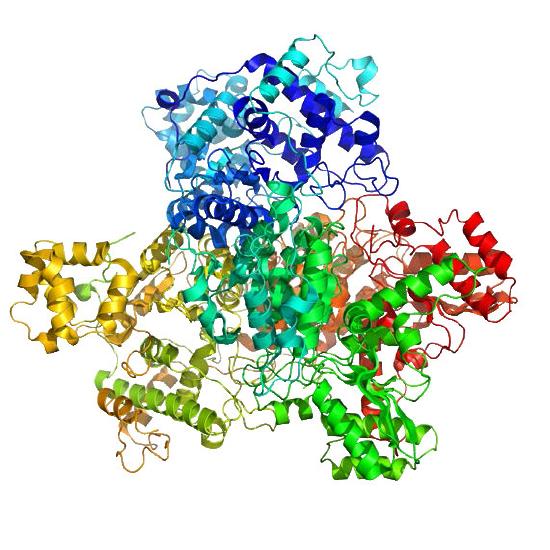 The pyruvate dehydrogenase enzyme is a complex of multiple copies of three subunits that catalyze the decarboxylation (removal of CO2 from) of pyruvate to form acetyl-CoA. The reaction mechanism requires use of five coenzymes, including thiamin pyrophosphate which is derived from the B vitamin named thiamin. Pyruvate dehydrogenase is an enormous complex in mammals with a size five times greater than ribosomes.

Pyruvate deyhdrogenase is regulated both allosterically and by covalent modification – phosphorylation / dephosphorylation. Regulation of pyruvate dehydrogenase, whether by allosteric or covalent mechanisms has the same strategy. Indicators of high energy availability in a cell shut down the enzyme, whereas indicators of low energy stimulate it.

For allosteric regulation, the high energy indicators affecting the enzyme are ATP, acetyl-CoA, NADH, and fatty acids, which inhibit it. AMP, Coenzyme A, NAD+, and calcium, on the other hand, stimulate it (Figure 6.67). 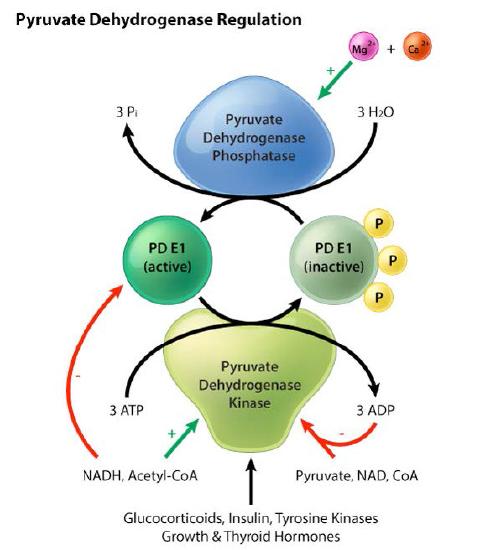 Other signals also affect the activity of the complex. For instance the hormone insulin also also activates pyruvate kinase and the glycolysis pathway, spurring cellular use of internalized glucose. 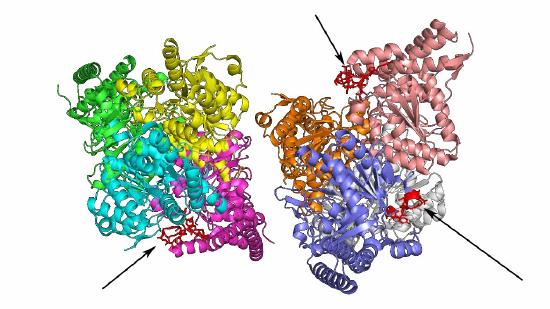 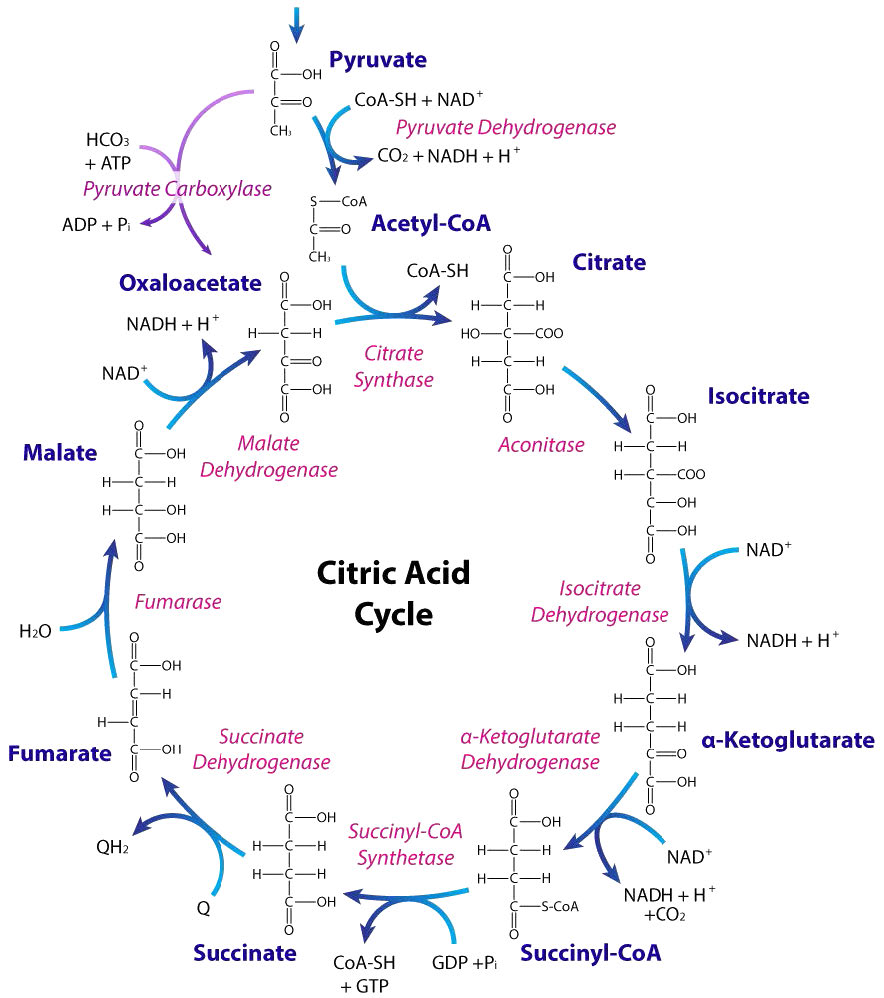 The usual starting point point for consideration of the Citric Acid Cycle itself is the addition of acetyl-CoA to oxaloacetate (OAA) to form citrate.

Acetyl-CoA for the pathway can come from a variety of sources. The reaction joining it to OAA is catalyzed by citrate synthase and is quite energetically downhill. This, in turn, helps to “pull” the malate dehydrogenase reaction preceding it in the cycle.

In the next reaction, citrate is isomerized to isocitrate by action of the enzyme called aconitase.

Isocitrate is a branch point in plants and bacteria for the glyoxylate cycle.

These coenzymes include derivatives of the vitamins Niacin, Riboflavin, and Thiamin.

Note that at this point the cycle has produced 2 NADH molecules (reducing NAD+) during oxidation-reduction reactions. Two carbons have been ‘lost’ from the cycle as carbon dioxide, leaving four carbons from the 6-carbon citrate.

The reduced NADH can feed the Electron Transport Chain, contributing to the formation of ATP via oxidative phosphorylation.

The remainder of the citric acid cycle involves conversion of the four carbon succinyl-CoA into oxaloacetate. Succinyl-CoA is a branch point for the synthesis of heme. Succinyl-CoA is converted to succinate in a reaction catalyzed by succinyl-CoA synthetase (named for the reverse reaction) and a GTP is produced, as well – the only substrate level phosphorylation in the cycle.

The energy for the synthesis of the GTP comes from energy released during hydrolysis of the thioester bond between succinate and the CoA-SH.

Oxidation of succinate occurs in the next step, catalyzed by succinate dehydrogenase. This interesting enzyme both catalyzes this reaction and participates in the electron transport system, funneling electrons from the FADH2 it gains in the reaction to coenzyme Q. The product of the reaction, fumarate, gains a water across its trans double bond in the next reaction, catalyzed by fumarase to form malate.

Fumarate is also a byproduct of nucleotide metabolism and of the urea cycle. Malate is important also for transporting electrons across membranes in the malate-aspartate shuttle  and in ferrying carbon dioxide from mesophyll cells to bundle sheath cells in C4 plants. 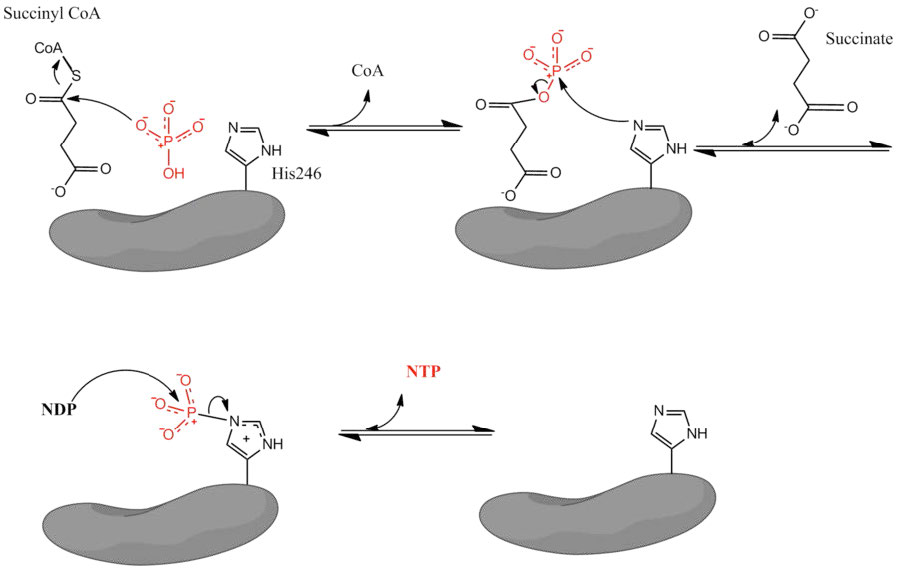 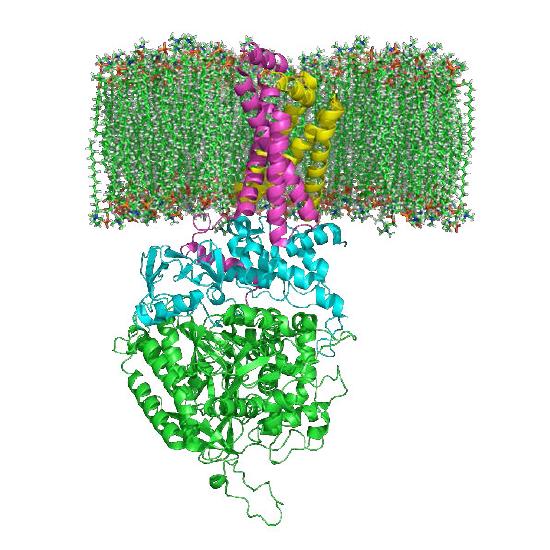 Conversion of malate to oxaloacetate by malate dehydrogenase is a rare biological oxidation that is energetically unfavorable on its own.

The reaction is ‘pulled’ by the energetically favorable conversion of oxaloacetate to citrate in the citrate synthase reaction described above. Oxaloacetate intersects other important pathways, including amino acid metabolism (readily converted to aspartic acid), transamination (nitrogen movement) and gluconeogenesis.

Regulation of the citric acid cycle

Allosteric regulation of the citric acid cycle occurs as substrates and products of the pathway, or molecules involved in energy transfer, activate or inhibit enzymes in ways that allow for appropriate responses by the cell to energy states. Substrates/products that regulate or affect the pathway include acetyl-CoA and succinyl-CoA .

As tends to occur in metabolism, regulation occurs on enzymes that catalyze reactions with large energy drops and which are at key branch points, shutting off entire paths that do not need to be active.

The citric acid cycle is a major catabolic pathway producing a considerable amount of energy for cells. Organisms that have the biochemical machinery to perform oxidative phosphorylation use the cycle to extract far more energy from their food than those that do not have this ability.

Since the electron transport chain uses molecular oxygen (O2) as its final electron acceptor, the citrate cycle is only beneficial as an energy source for organisms that can metabolize aerobically (with oxygen). Anaerobic organisms do not have mitochondria, do not carry out these reactions and are at a disadvantage energetically as a result. However they often can exist in ecological niches where oxygen is scarce or non-existent, and where they do not need to compete with aerobic life. 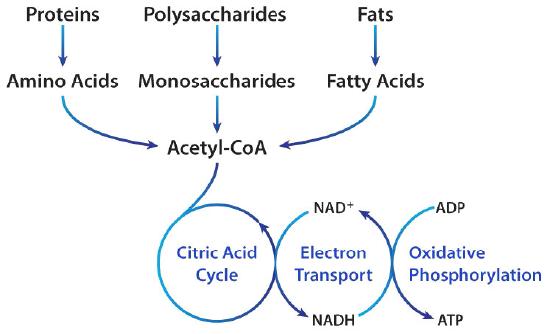 These many different metabolic pathways converge at this key molecule, feeding into the cycle to provide organisms energy from a variety of food and stored chemical sources.