Apart from their ability to greatly speed the rates of chemical reactions in cells, enzymes have another property that makes them valuable. This property is that their activity can be regulated, allowing them to be activated and inactivated, as necessary. This is tremendously important in maintaining homeostasis, permitting cells to respond in controlled ways to changes in both internal and external conditions.

Inhibition of specific enzymes by drugs can also be medically useful. Understanding the mechanisms that control enzyme activity is, therefore, of considerable importance.

Probably the easiest type of enzyme inhibition to understand is competitive inhibition. It is the one most commonly exploited pharmaceutically. Molecules that are competitive inhibitors of enzymes resemble one of the normal substrates of an enzyme. An example is methotrexate, which resembles the folate substrate of the enzyme named dihydrofolate reductase (DHFR). This enzyme normally catalyzes the chemical reduction of folate, an important reaction in the metabolism of nucleotides.

Figure 4.33 – Competitive inhibitors resemble the normal substrate and compete for binding at the active site. Image by Aleia Kim 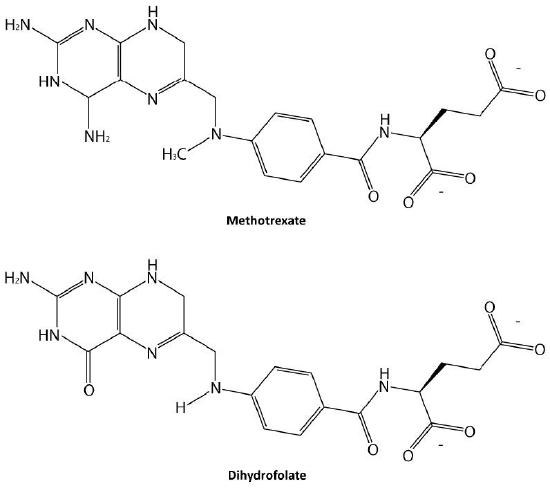 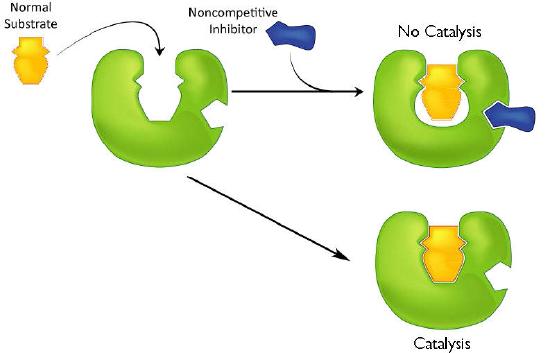 Figure 4.37 – Non-competitive inhibition – inhibitor does not resemble the substrate and binds to a site other than the active site. Image by Aleia Kim

How can we tell what is happening between inhibitors and enzymes? Experimental evidence is obtained by measuring the rate of the enzyme-catalyzed reaction under various conditions. As substrate concentrations are increased, a competitive inhibitor will gradually ‘lose out’ to substrate and the rate of product formation will rise. But a similar effect will not be seen in the other forms of inhibition.

Additional experimental approaches are standard methods for such studies. These approaches have been enormously helpful to scientists studying natural systems as well as pharmaceutical interventions that target enzyme activity.

In contrast to the first three types of inhibition, which involve reversible binding of the inhibitor to the enzyme, suicide inhibition is irreversible, because the inhibitor becomes covalently bound to the enzyme during the inhibition. Suicide inhibition rather closely resembles competitive inhibition because the inhibitor generally resembles the substrate and binds to the active site of the enzyme. The primary difference is that the suicide inhibitor is chemically reactive in the active site and makes a bond with it that precludes its removal. Such a mechanism is that employed by penicillin (Figure 4.43), which covalently links to the bacterial enzyme, DD transpeptidase and stops it from functioning. Since the normal function of the enzyme is to make a bond necessary for the peptidoglycan complex of the bacterial cell wall, the cell wall cannot properly form and bacteria cannot reproduce. 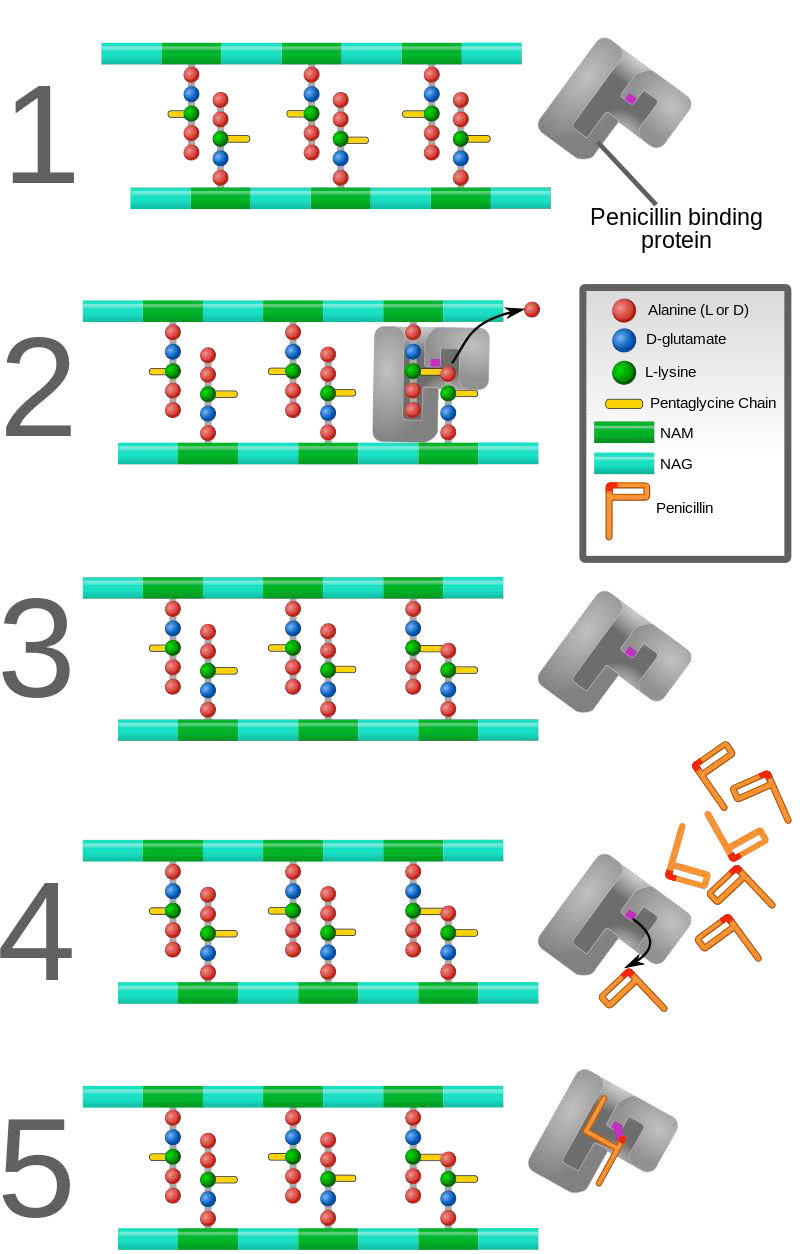 Enzymes are subject to controls from outside, but cells themselves also moderate and control enzyme activity. This allows an organism or cell to be responsive to its surroundings and physiological state.

There are four general ways this occurs:

Some enzymes are controlled by more than one of these methods.

The term allosterism refers to the fact that the activity of certain enzymes can be affected by the binding of small molecules at sites away from the active site.

When these effector molecules bind they cause the changes in the enzyme shape, as a result of binding.

Homotropic effectors, which are the same as the substrate molecules, usually are activators of the enzymes they bind to. from the less active T-state to the more active R-state, as the enzyme shifts its shape when a lot of substrate is around.

Away from the active site, enzymes can be either activated or inhibited when substances different than the substrate (heterotropic effectors) bind and induce different physical states (shapes, as it were) in an enzyme. These shifts alter the ability of the binding site to collect and hold substrate. On the other hand, an enzyme can be activated by effector binding as well.

A special kind of allosteric control is exhibited by the enzyme HMG-CoA reductase, which catalyzes an important reaction in the pathway leading to the synthesis of cholesterol. Binding of cholesterol to the enzyme reduces the enzyme’s activity significantly. Cholesterol is not a substrate for the enzyme, so it is therefore a heterotropic effector.

Feedback inhibition always operates by allosterism and further, provides important and efficient control of an entire biochemical pathway. By inhibiting an early enzyme in a pathway, the flow of materials (and ATP hydrolysis required for their processing) for the entire pathway is stopped or reduced, assuming there are not alternate supply methods.

In the cholesterol biosynthesis pathway, stopping this one enzyme has the effect of shutting off (or at least slowing down) the entire pathway. This is significant because after catalysis by HMG-CoA reductase, there are over 20 further reactions necessary to make cholesterol, many of them requiring ATP energy. Shutting down one reactions stops all of them.

Some enzymes are synthesized in a completely inactive form and their activation requires covalent bonds in them to be cleaved. Such inactive forms of enzymes are called zymogens. Examples include the proteins involved in blood clotting and protein-destroying enzymes of the digestive system, such as trypsin, chymotrypsin, and pepsin. These enzymes can not be active where they are made (inside the pancreas) but only where they end up (inside the GI tract). When they become active in the tissues of the pancreas, pancreatitis occurs.

For both the blood clotting enzymes and the digestive enzymes, the zymogens are activated in a protease cascade. This occurs when activation of one enzyme activates others in a sort of spreading chain reaction. In such a scheme the first enzyme activated proteolytically cleaves the second zymogen, causing it to be activated, which in turn activates a third and this may proceed through several levels of enzymatic action (Figure 4.50).

The advantage of cascades is that they allow a large amount of zymogens to become activated fairly quickly, since there is an amplification of the signal at each level of catalysis.

Blood clotting involves polymerization of a protein known as fibrin. Since random formation of fibrin is extremely hazardous because it can block the flow of blood, potentially causing heart attack/stroke, the body synthesizes fibrin as a zymogen (fibrinogen) and its activation results from a “cascade” of activations of proteases that arise when a signal is received from a wound. Similarly, the enzyme catalyzing removal of fibrin clots (plasmin) is also synthesized as a zymogen (plasminogen), since random clot removal would also be hazardous (see below also). 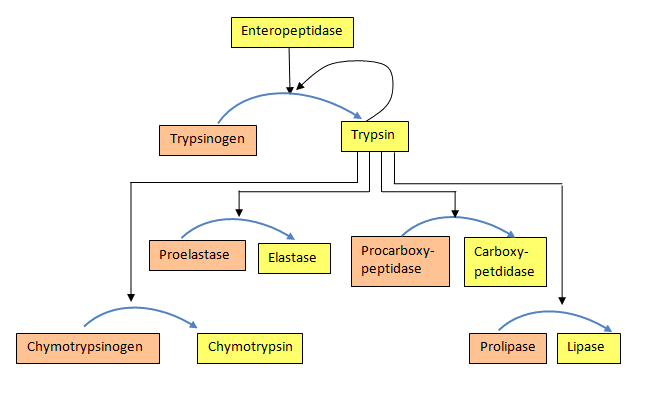 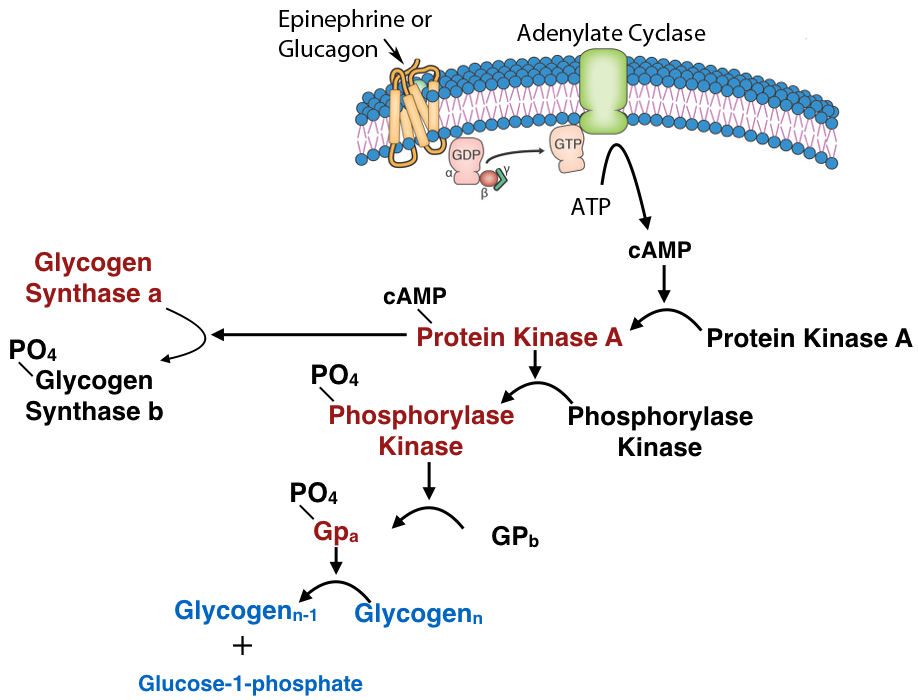 These include sedoheptulose 1,7-bisphosphatase, ribulose-5-phosphate kinase, fructose 1,6-bisphosphatase, and glyceraldehyde 3-phosphate dehydrogenase. Thus, in the light, electrons flow, causing NADPH to accumulate and ferredoxin to push electrons in the direction of these enzymes above, activating them and favoring the Calvin cycle. In the dark, the concentration of reduced NADPH, reduced ferredoxin, and reduced thioredoxin fall, resulting in loss of electrons by the Calvin cycle enzymes (oxidations that re-form disulfide bonds) and the Calvin cycle inactivates.

Other means of controlling enzymes relate to access to substrate (substrate-level control) and control of enzyme synthesis from DNA. Hexokinase is an enzyme that is largely regulated by availability of its substrate, glucose. When glucose concentration is low, the product of the enzyme’s catalysis, glucose-6-phosphate, inhibits the enzyme’s function.

Regulation of enzymes by controlling their synthesis is covered later in the book in the discussion relating to control of gene expression.