A memo (or memorandum, meaning “reminder”) is normally used for communicating policies, procedures, or related official business within an organization. It is often written from a one-to-all perspective (like mass communication), broadcasting a message to an audience, rather than a one-on-one, interpersonal communication. It may also be used to update a team on activities for a given project, or to inform a specific group within a company of an event, action, or observance.

A memo’s purpose is often to inform, but it occasionally includes an element of persuasion or a call to action. All organizations have informal and formal communication networks. The unofficial, informal communication network within an organization is often called the grapevine, and it is often characterized by rumor, gossip, and innuendo. On the grapevine, one person may hear that someone else is going to be laid off and start passing the news around. Rumors change and transform as they are passed from person to person, and before you know it, the word is that they are shutting down your entire department.

One effective way to address informal, unofficial speculation is to spell out clearly for all employees what is going on with a particular issue. If budget cuts are a concern, then it may be wise to send a memo explaining the changes that are imminent. If a company wants employees to take action, they may also issue a memorandum. For example, on February 13, 2009, upper management at the Panasonic Corporation issued a declaration that all employees should buy at least $1,600 worth of Panasonic products. The company president noted that if everyone supported the company with purchases, it would benefit all.[1]

While memos do not normally include a call to action that requires personal spending, they often represent the business or organization’s interests. They may also include statements that align business and employee interest, and underscore common ground and benefit.

A memo has a header that clearly indicates who sent it and who the intended recipients are. Pay particular attention to the title of the individual(s) in this section. Date and subject lines are also present, followed by a message that contains a declaration, a discussion, and a summary.

In a standard writing format, we might expect to see an introduction, a body, and a conclusion. All these are present in a memo, and each part has a clear purpose. The declaration in the opening uses a declarative sentence to announce the main topic. The discussion elaborates or lists major points associated with the topic, and the conclusion serves as a summary. Figure 2 provides a sample memo using the format explained above. 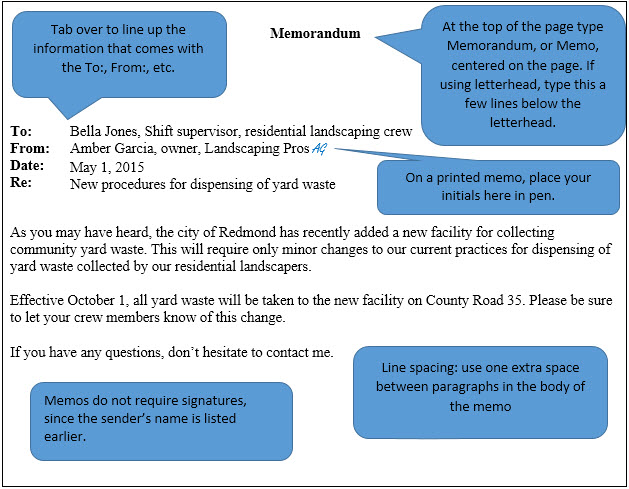 Always consider the audience and their needs when preparing a memo. An acronym or abbreviation that is known to management may not be known by all the employees of the organization, and if the memo is to be posted and distributed within the organization, the goal is clear and concise communication at all levels with no ambiguity.

Memos are often announcements, and the person sending the memo speaks for a part or all of the organization. While it may contain a request for feedback, the announcement itself is linear, from the organization to the employees. The memo may have legal standing as it often reflects policies or procedures, and may reference an existing or new policy in the employee manual, for example.

Some written business communication allows for a choice between direct and indirect formats, but memorandums are always direct. The purpose is clearly announced.

Memos are a place for just the facts, and should have an objective tone without personal bias, preference, or interest on display. Avoid subjectivity.

This chapter was derived by Annemarie Hamlin, Chris Rubio, and Michele DeSilva, Central Oregon Community College, from the following sources: