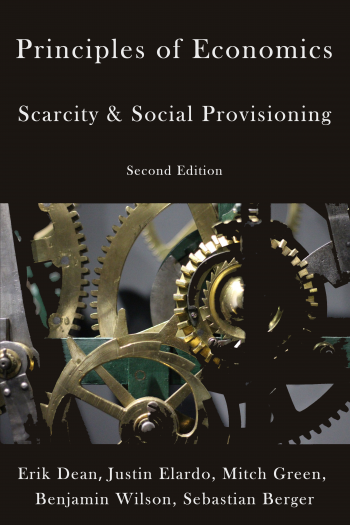 Book Description: Principles of Economics covers scope and sequence requirements for a two-semester introductory economics course. The authors take a balanced approach to micro- and macroeconomics, to both Keynesian and classical views, and to the theory and application of economics concepts. The text also includes many current examples, which are handled in a politically equitable way.

Principles of Economics: Scarcity and Social Provisioning takes a pluralistic approach to the standard topics of introductory economics courses.  The text builds on the chiefly neoclassical (or orthodox economics) material of the OpenStax Principles of Economics text, adding extensive content from heterodox economic thought.  Emphasizing the importance of pluralism and critical thinking, the text presents the method and theory of neoclassical economics alongside critiques thereof and heterodox alternatives in both method and theory.  This approach is taken from the outset of the text, where contrasting definitions of economics are discussed in the context of the various ways in which orthodox and heterodox economists study the subject.  The same approach–of theory and method, critique, and alternative theory theory and method–is taken in the study of consumption, production, market exchange, macroeconomic equilibrium, fiscal and monetary policy, as well as in the applied theory chapters.  Historical and contemporary examples are given throughout, and both theory and application are presented with a balanced approach.

This textbook will be of interest especially to instructors and students who wish to go beyond the traditional approach to the fundamentals of microeconomic theory, and explore the wider spectrum of economic thought.

This book is a cloned version of Principles of Economics by Erik Dean, Justin Elardo, Mitch Green, Benjamin Wilson, and Sebastian Berger, published using Pressbooks by Open Oregon Educational Resources under a CC BY (Attribution) license. It may differ from the original.