The institutional analysis of conspicuous consumption demonstrates the importance of moving past notions of utility maximization, and beginning to look at the historical and cultural reasons behind individual consumers’ decisions.  Yet, consider the following

These and many other examples might be taken to suggest that it is not only the individual decisions of consumers concerning what to buy that needs to be explained.  Rather, we should also be looking to understand –the social preoccupation with acquiring and, most importantly, identifying with consumer goods–as well.

To understand the importance of advertising and consumerism today, the best place to start is with the work of institutional economist John Kenneth Galbraith.  In The Affluent Society (1958) and later in The New Industrial State (1967), Galbraith argued forcefully that the historical conditions that classical and neoclassical economists were chiefly concerned with–namely, production of necessities amidst widespread poverty and the allocation of scarce resources–had been superseded by an age of relative affluence.  Mass production, as you’ll see in a later chapter of this textbook, had largely solved the problem of producing enough to adequately meet the needs of the people (though ensuring everyone has access to basic necessities remains a problem to this day).  Of course, solving one problem presents new ones, and for Galbraith one of the most important problems society had come to face was how to ensure that there would be demand for what could be produced once our basic needs were met.

Enter the adman.  As Galbraith argued, advertising and salesmanship became important once our basic needs were, for the most part, easily met, and our remaining desires were no long immediately evident to us.  Advertising and salesmanship functioned, then, to ‘synthesize, elaborate, and nurture’ our desires for goods and services beyond those serving simply to keep us fed, clothed, sheltered, and so on.  Another way to look at it: where businesses had come increasingly to serve customers in ways that went beyond providing the goods and services to meet basic needs, these businesses required a way to maintain demand–the willingness to buy–where hunger, cold, and so on would not.  In this manner, advertising and salesmanship became a form of ‘’, designed to keep sales up, to keep people buying even after they would have otherwise felt satisfied. 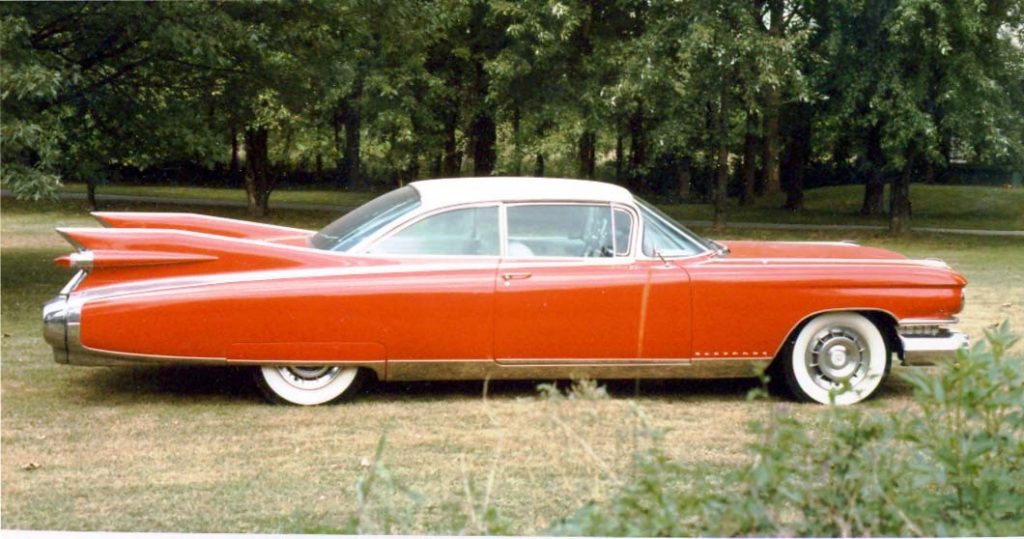 The 1959 Cadillac Eldorado, sporting the decorative tailfins that reflected the increasing influence of marketing on automobile design in the mid-20th century. (Wikimedia user Veesixteen. Public Domain)

With the ascendancy of marketing, the products we buy come to take on special characteristics as their design increasingly reflects the needs of businesses to sell as much as they reflect our own personal wants and needs.  More or less superficial options for colors and frequent style changes, for instance, demonstrate that consumption is, increasingly, a conspicuous act.

But more than this, these new characteristics indicate that people are associating their very identities with the consumption choices they make.  Consider, for instance, what kind of car you would prefer to drive versus what kind of car you wouldn’t want ‘to be caught dead in’.  Or, ask yourself why it is common to see groups of people who are all dressed similarly.  It’s likely not difficult to see that consumption and identity have become significantly intertwined in modern culture.

But what of the rebels–the people who refuse to conform?  As you might have guessed, today there are plenty of products available for them as well.  Consider the New York advertising firm Doyle Dane Bernbach’s campaign to sell the Volkswagen Beetle in the 1960s.  The ads famously used wit and humor to target drivers who favored reliability and affordability over the increasingly common conspicuous consumption elements of American automobiles.  A 1963 magazine spread, for instance, depicted 15 identical images of the Beetle with model years from 1945 to 1963 under each image, indicating the utter lack of changes in the body design over this period.  With advertising like this Volkswagen was able to successfully market its products to the consumers who didn’t accommodate themselves to the mainstream preferences of the time.

The Volkwagen ad campaign of the 1960s might be taken as marketing naturally restraining the potential excesses of conspicuous consumption: needless model changes and functionless decorations were explicitly rejected, even mocked, in these ads.  However, the important thing to recognize is that it also allowed consumers to display their independence from the cultural trends while still maintaining their relationship with the businesses that provide these goods.

Over the decades this form of marketing has evolved into what institutional economist Philip Mirowski calls “”: a form of marketing in which businesses promote the belief that consumers are ‘too smart’ to be fooled or persuaded by advertising, brands, and so on.  With that belief firmly held, consumers are free to buy what they want, safe in the knowledge that their decisions are their own.  Self-reflection becomes unnecessary, and (potentially all) differences of opinion, whether political, cultural, or otherwise, become expressible through the conspicuous consumption of goods and services.  In this manner, the very concept of Self is reduced to selections from a menu of shopping opportunities; the boundaries between a person’s identity and businesses’ marketing become murky–hence, “murketing.”

The curious result of all of this is that our consumption choices, our preferences, our very identifies seem more and more to be adjusted to fit the goods and services available for purchase, rather the reverse. To be sure, this is not a criticism of individuals who prefer one branded identity over another.  It is, rather, an observation of the extent to which the complexity of the practices of conspicuous consumption and corporate demand management have coevolved.

the social preoccupation with acquiring and identifying with consumer goods

the social preoccupation with acquiring and identifying with consumer goods

a form of marketing in which businesses promote the belief that consumers are ‘too smart’ to be fooled or persuaded by advertising, brands, and so on