By the end of this section, you will be able to:

In chapter “Costs and Prices” you learned (or will learn) that modern businesses are treated as going concerns–that is, organizations which are expected to continue to exist into the foreseeable future.  This idea, reflected in accounting practices developed in the second half of the 19th century, is central to how heterodox economists understand the nature of the modern business enterprise.  Its historical roots are explored in more detail in chapter “The Rise of the Big Business,” but here we want to focus on a particular cause, technological advance, and its implications.

In his classic, The New Industrial State (1967), economist John Kenneth Galbraith compared the Ford Motor Company in the year of its founding, 1903, to the same business at the introduction of the first Mustang in 1964.  In 1903 the company employed around 125 people, worked with approximately $150,000 in capital, and required only months of negotiations, preparation, and production to bring an automobile to the market.  It would be an understatement to say that, six decades later, the process was more involved.  The Mustang was the result of several years of preparation, millions of dollars on engineering and ‘styling’, and tens of millions on tooling for production.  At the time, Ford employed over 300,000 people. 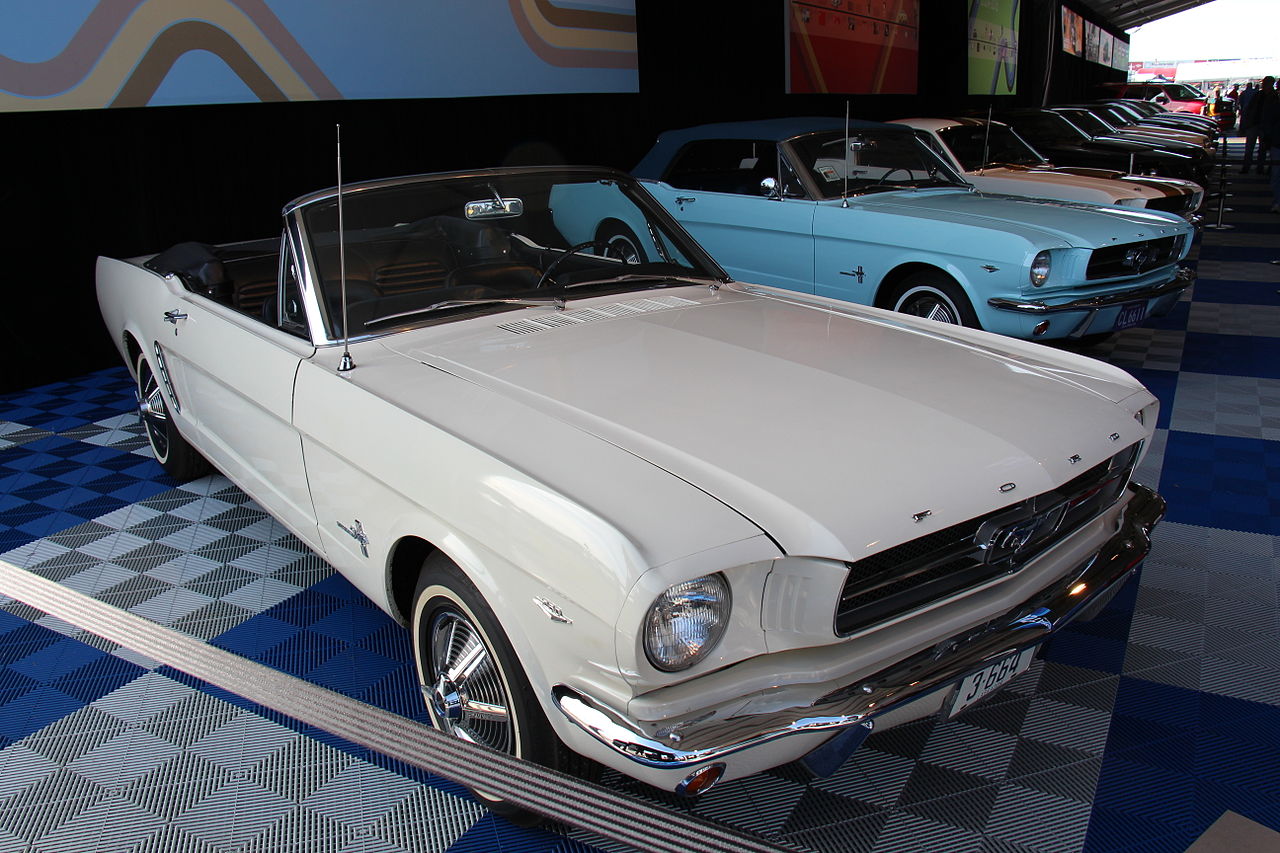 Figure 3. A 1964 Ford Mustang in Wimbledon White, photographed at the 50th anniversary of the Mustang at the Charlotte Motor Speedway. (Source: Sicnag, Wikimedia, CC-BY-2.0)

Galbraith argued that the essential cause of this massive increase in preparation, capital, and labor was the tremendous advance in (which he defined as “the application of scientific or other organized knowledge to practical tasks”).  Increasingly sophisticated technology requires specialization–of machinery and the materials it will work on, as well as of workers.  All of which, of course, requires more capital (that is, money).  It also means that increasingly specialized workers, machines, and so on must be more carefully managed; and that a commitment to produce something must be made much further in advance of actually having something to sell.  As Galbraith explained, the Dodge brothers’ machine shop, responsible for machining the engine and chassis of the original Ford automobiles, could have hypothetically been asked to accommodate significant changes in the car’s design with only a few hours delay.  The factories which built the Mustang, on the other hand, were effectively locked into making Mustangs for well over a year.

Finally, and most importantly, there is the technological imperative of planning.  As Galbraith argued, the large financial and material commitments necessary to design a product and prepare for its production require that each part of the process works today so that, in the distant future, when all the parts are brought together, the job is done correctly.  This means that the business enterprise will require specialists in predicting (and shaping) future market conditions, specialists in materials acquisition, specialists in education to ensure a competent workforce, and so on–all to ensure that what the organization set out to do some months or years or decades earlier actually gets done and, with some luck, proves successful.  Without that capacity, the confidence to set out on such a sophisticated enterprise would never have existed in the first place.

What bearing, then, does this have on our theories of how businesses behave and how markets operate?  We’ll start with the  general points: first, the small firm of the perfect competition model will not do in an age of increasingly sophisticated technology.  Both the complexity of specialized knowledge and its management through a large organization suggest that a large business enterprise will be the norm.  Second, that complexity of knowledge and organization suggests that the modern business enterprise ought to be considered in more dimensions that simply its cost curves and a goal of maximizing profits.  The politics and culture of organization become relevant to understanding what Galbraith called the –that is, the whole of those people who participate in the group decision-making that directs the business enterprise through time.

Does the internet move us closer to perfect competition?

A common refrain in recent years argues that information technology–in particular, the internet–contradicts the tendency toward big business.  Recall that the model of perfect competition doesn’t suggest that firms must be absolutely tiny–say, having no more than a handful of employees.  Rather, it simply considers situations in which firms are small relative to the size of the market.  Many have argued that the internet has made global markets out of local markets; and, as a result, firms that used to be considered large are now small relative to the whole world of competitors.

Yet, within the tech sector, as in most other industries, concentration and big business appear to be the norm.  Large business like IBM have long dominated traditional computing, before the World Wide Web, and relatively newer firms like Google and Facebook continue to expand control over much of the newer, web-based markets.  Of course, Amazon, Paypal, eBay, AirBnB, and Uber have allowed for a proliferation of small merchants, taxi drivers, and hotels; but with these large corporations looming over the markets they’ve created, have we really returned to the traditional competitive product markets of past centuries–or are we looking at the competitive (one might say, ‘divide and conquer’) labor markets that characterized the rise of big business in the late 1800’s?

Third, if planning is the central concern of the modern business enterprise, then we have to reconsider how we see firms relating to their markets.  In previous chapters, you have studied the basic orthodox models of market structure and how firms respond to particular market conditions.  The implicit assumption in these models is that firms react to markets.  Yet, if long term planning is to be done effectively it would seem obvious that businesses cannot take the markets as given and respond accordingly.  Instead, they will have to actively shape those markets to ensure stable, predictable conditions into the future.

This third point has a particular bearing on our theories of prices and competition.  History shows that businesses often try to avoid competition in terms of price.  You can probably imagine why this is, given the complexity of modern technologies and the magnitude of investments necessary to get a business off the ground.  Where starting a new business or a new product line for an existing business requires huge sums of money and years of planning, it is simply a must that the investors and management are reasonably sure that it will be able to sell the product profitably in the relatively distant future.  The business enterprise’s problem in this scenario is that competitors may be making the same investments; and, in an attempt to make sure those investments don’t go to waste due to weak sales, they may try to grab market share by lowering their prices.  If everyone in the market pursues the same strategy, what do you think the result would be?

Stiff competition based on prices is relatively rare in established markets for a simple reason: it tends to be mutually destructive to most or all competitors who engage in it.  In fact, when prominent businesses engage in that sort of scenario–as, for instance, the fast food giants occasionally have in recent years–it is often considered newsworthy, usually showing up in the headlines of the business press as a ‘price war’.  A century ago, the term ‘cut throat competition,’ which includes aggressive price cuts and other efforts to drive competitors out of the market, was common.  Clearly, both of the terms suggest that price competition can be a violent thing–something, one would hope at least, that should be avoided if at all possible.

In summary, then, heterodox economists typically see the modern business enterprise as a going concern, engaged in long term planning which includes managing and shaping both technological and market conditions.  In this view firms don’t maximize profits so much as they seek to survive through time.  If it is appropriate to say that businesses tend to maximize anything, it would be growth through time rather than profits specifically.  Likewise, outright price competition is a relatively rare occurrence in mature markets today.  Though most businesses will take competition into consideration when setting their prices, it would be a better description of the real world to say that competition occurs mainly through other practices, like advertising and branding, product innovations, or more cost-effective production practices.  That is to say that businesses compete chiefly through their investments, not their prices.

the organization of people who participate in the group decision-making that directs the business enterprise through time.  John Kenneth Galbraith referred to it as ‘the brain’ of the organization

all the ways in which existing inputs produce more or higher quality, as well as different and altogether new products; or, as John Kenneth Galbraith defined it, “the application of scientific or other organized knowledge to practical tasks”