states that the buoyant force exerted on an object by a fluid is equal to the weight of the fluid displaced by the object.

A given of low tissue will take up more relative to the same mass of high density tissue. Taking up the extra volume means more water is when the body is submerged so the will be larger compared to the than it would be for a more dense body. In turn, that means that apparent weight is smaller relative to actual weight  for bodies of higher density. By comparing weight and apparent weight, the body density can be determined. We will do that in the next chapter, but first we should become more familiar with the .

The water by an entire beach ball weighs more than a beach ball, so if you hold one under water the will be greater than the . Your hand is providing the extra downward force to balance out the forces and maintain static equilibrium (left diagram). When you let go, the forces will be unbalanced and the ball will begin moving upward (right diagram).

The of ice is only about 9/10 that of water. The of the water displaced by only 9/10 of the iceberg has the same weight as the entire iceberg. Therefore, 1/10 of the iceberg must remain exposed in order for the weight and buoyant forces to be balanced and the iceberg to be in .

Check out this buoyancy simulation which lets you control how much objects of different masses are submerged and shows you the resulting along with forces provided by you and a scale at the bottom of the pool (). 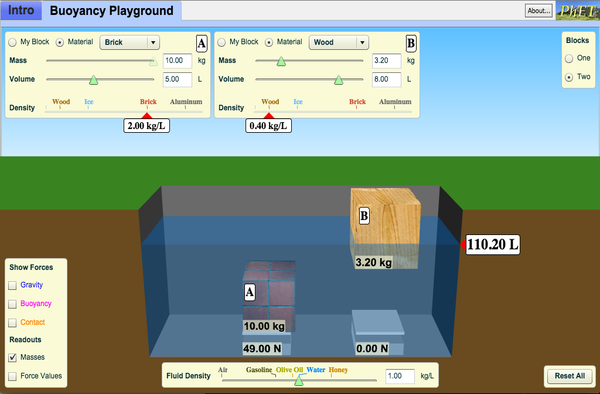 Submarines control how much water they displace by pumping water in and out of tanks within the submarine. When water is pumped inside, then that water is not displaced by the sub and it doesn’t count toward increasing the buoyant force. Conversely, when water is pumped out that water is now displaced by the sub and the buoyant force increases, which is the concept behind the maneuver in the following video:

The upward buoyant force that is exerted on a body immersed in a fluid, whether fully or partially submerged, is equal to the weight of the fluid being displaced by the body

pushed out of original position, typically in reference to fluid pushed out of the way by an object placed in the fluid, or an object being displaced from its equilibrium position