We have learned that evaporation of liquid molecules transfers thermal energy from the liquid to the air. The heat of vaporization quantifies how much energy is transferred. The reverse process of , in which vapor molecules re-enter a liquid or stick together on a surface, will bring thermal energy out of the air. The  also quantifies the energy transferred during condensation. Changing from solid to liquid, known as , requires energy just as evaporation does. In similar fashion to vaporization, the amount of energy removed by melting is quantified by a latent heat, in this case the (Lf). For water, Lf = 334 kJ/kg, which means that for every kilogram of ice melted, 334 kiloJoules of energy input is needed. Freezing releases the same amount of energy into the environment that melting requires as input.

Just as with evaporation, melting is a spontaneous process. We don’t actively control the behavior of the molecules, but they simply trend toward a configuration which maximizes the entropy. The temperatures at which phase changes will lead to an increase in entropy depends on the pressure of the surrounding air. The temperature at which melting occurs (under a given pressure) is known as the melting point. The melting and boiling points and latent heats of various substances at standard atmospheric pressure are shown in the following chart:

If you place ice in a  warm room and leave it alone, it will melt. The ice would be a because it will happen all on it’s own, so we should find that melting increases the total entropy (ΔS > 0). Let’s check that out. We’ll keep it simple and calculate change in entropy of one kilogram of ice, which melts at 0 °C, or 273 K.

Next we calculate the change in for the room. The same that went into melting the ice came out of the room, so the Q for the room is the same as for the ice, only negative. Let’s pick a typical room temperature of 20 °C for our example, which is 293 K:

Now we just add up the two changes to get the total:

Our entropy change is greater than zero, so the Second Law states that ice melting in warm room is a , which we observe it to be.

Spending more than a day in frozen landscapes (high altitude,  high latitude, or both), will require ice/snow to make drinking water.  Let’s determine the thermal energy required to melt 10 kg of  ice that started at 0 °C.

Now that we are familiar with the idea of latent heat, let’s combine that with our understanding of the energy required to change temperature, to get a full of the minimum amount of stove fuel required for a three-person, round-trip expedition to the summit of Denali, North America’s highest mountain, at 20,380 ft (6495 m). Allowing for gradual acclimatization to altitude will reduce the likelihood of acquiring high altitude pulmonary edema and/or high altitude cerebral edema, so we will plan 21 days on the mountain.

First, let’s figure out how much water we need. The combination of acclimatization and climbing effort will require at least 4 liters of water per person per day. The total we need is then:

The of water is 1 kg/L so we will also need 252 kg of water.  To get that of water we will need to warm and melt that mass of snow each day.  The average temperature on the mountain will be -20 °C and we will assume the snow to be melted starts off at this temperature. Let’s find the energy required to warm that mass of -20 °C snow up to 0 °C. We use a chart of specific heats to find cice = 2 kJ/kg = 2,000 J/kg. Using that value in our equation relating heat and temperature change:

Next we need the energy to melt the snow:

Typically the snow is brought to a boil to prevent sickness due to contamination by previous expeditions, and because a hot drink is great for mind and body after hauling a heavy pack and sled through deep snow for 12 hours in sub-zero temperatures at high altitude.

According to data on energy densities in fuel, typical liquid fuels (white gas, gasoline, etc.) will provide roughly 40 MJ (40,000,000 J) of net heating energy per kg of fuel burned.  To make our rough estimate the minimum fuel requirement we will assume all of the thermal energy released by burning the fuel is transferred to the water:

The of liquid fuels is less than water at roughly 0.75 kg/L, so this minimum 4.7 kg of fuel comes out to about 6 liters, or 1.5 gallons. Accounting for heat loss from stove and pot to the environment (especially in windy conditions) the actual requirement could end up substantially greater, depending on conditions. On an actual 3-person, 21-day expedition to the summit of Denali in May of 2012 we used just under 2 gallons of fuel, so our estimate was pretty reasonable.

Check out the following simulations allows you to play with phase changes. 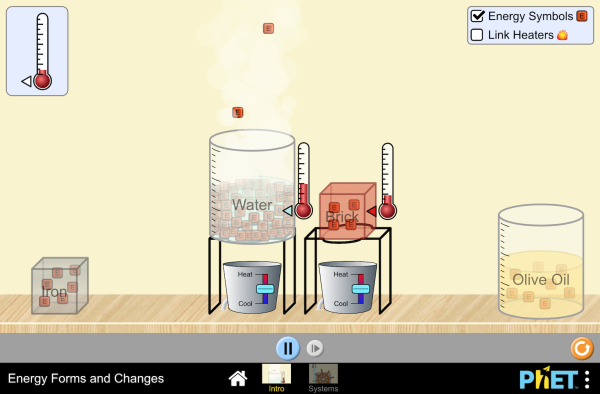 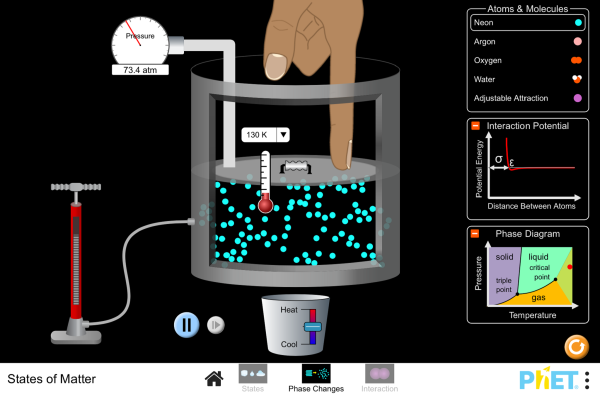 Process of vapor changing phase into a liquid.

Thermal energy input required to change a unit mass of liquid into vapor.

a process which occurs naturally on its own, without the need for work to be done in forcing it to happen.

A measure of energy dispersion in a system.

a rough value obtained without making a measurement by using prior knowledge and assumptions.

A material property that determines the amount of energy required to raise the temperature one mass unit of the material by one temperature unit.