Different names are used for electromagnetic radiation (light waves) with various ranges of frequency: radio waves, microwaves, infrared radiation, visible light, ultraviolet radiation, X-rays, and gamma rays. Collectively these ranges of frequencies make up the electromagnetic spectrum shown in the following diagram. The range frequencies that we can see is known as the visible spectrum, and we perceive the different frequencies within the visible spectrum as different colors. The wavelength of light, or any wave, is the distance between successive crests (peaks) of the wave. The frequency and wavelength of light waves are directly related and we can sometimes more easily relate to wavelength by comparing it to the length of familiar objects, so we often use wavelength instead of frequency to describe colors and the electromagnetic spectrum as a whole.

We can summarize the previous diagram in tabular form:

A theoretically perfect emitter for which the emissivity is one (

) is known as black body emitter, because such an emitter would also be a perfect absorber and would thus appear completely black. The shape amount of light emitted at each wavelength defines the emission spectrum of the black body, which depends only on temperature in a well-defined way:

This simulations allows you to see how the black body emission spectrum depends on temperature: 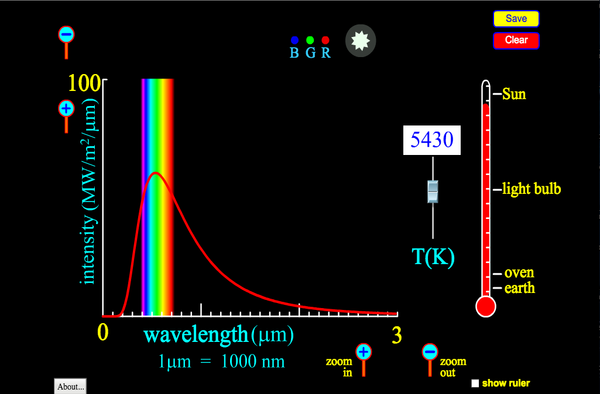 We are often able to approximate the temperature of objects by assuming they are black body emitters and matching up their emission spectrum with that of  a black body with a known temperature. This is the basic principle behind thermal imaging cameras and handheld infrared (IR) such as the one in the following image. (Note that IR thermometers are often include a low power laser to improve aim, but contrary to popular belief, the laser is not involved in the temperature measurement).

For example, we can estimate the surface temperature of the sun to be roughly 6000  K (10,000 °F) because the actual emission spectrum of the Sun best matches the black body emission spectrumof an object at  6000  K, as seen in the following graph. Notice that the peak of the Sun’s emission spectrum is in the visible range, but that significant radiation power is found in the UV and IR regions. The UV light is capable of penetrating the dead out layer of skin (epidermis) and breaking some molecular bonds in your cells, including those in DNA, which can lead to sunburn and increased risk of skin cancer.

Incandescent light bulbs use to generate light. In order for their emission spectrum to contain significant visible light their temperature must be several thousand , as seen from the previous graph showing black body emission spectra at several temperatures. Temperatures of 3000 K to 4000 K are achieved by running electric current through the narrow filaments of inside the bulbs to cause resistive heating (conversion of electric potential energy to thermal energy). The filaments are made of high temperature tolerant metals like tungsten to prevent . Additionally, the majority of air within the bulb has been removed to prevent conduction and from heating the glass and to prevent the filaments from quickly oxidizing (rusting). The emission spectra for objects at 3000 K to 4000 K show us that much of their radiated power is in the IR range rather than the visible range, and thus doesn’t provide useful illumination. Consequently,  much of the electrical energy used to power incandescent light bulbs goes to waste. In fact, glass does absorb IR radiation so much of the wasted energy simply goes into making the bulb glass hot, in some cases dangerously so. Fluorescent and LED bulbs don’t use to generate light. Instead they apply voltages to energize electric charges trapped in atoms or in semi-conductor materials. When the electrons de-energize they emitted light at specific wavelengths, reducing the wasteful production of non-visible light. However, light from incandescent bulbs is sometimes considered more pleasing because it more closely resembles the emission spectrum of fire.

Some materials are transparent to visible light, but readily absorb IR light (notice how glasses prevent IR light from reaching the camera in this thermal image). Liquid water, water vapor, carbon dioxide (CO2) gas and most types of glass behave this way.  The emission spectrum of the sun shown above has significant emission in the UV, visible, and IR parts of the electromagnetic spectrum.  The visible light gets through the glass, which is why the glass appears transparent to you. The majority of UV is absorbed or reflected, preventing you from getting sunburn inside the car. The glass absorbs much of the IR light, which is re-radiated in both directions, in and out of the car. The visible light that gets through is partially absorbed by the interior of the car (especially if the interior is dark). That absorbed visible light is then re-radiated as IR light because the interior of the car is not nearly hot to enough to radiate visible light like the sun. That re-radiated IR light is absorbed by the glass and re-radiated again in both directions, in and out of the car. Therefore a significant portion of the incoming visible light energy gets trapped inside the car and the interior temperature can rise quickly, even if the outside air temperature is cool.  Green houses use this same phenomenon to keep plants warm in cool weather, so this phenomenon is commonly known as the green house effect.  It’s never a good idea to leave children or pets in cars. Even if you perform thoughtful calculations to predict the interior temperature for a given set of conditions such as air temperature, wind speed, and cloudiness, those conditions can change quickly.  It’s best not to risk injury to loved ones.

The Earth’s atmosphere acts like a car’s windshield. The atmosphere lets most UV and visible light through, but significant IR light is absorbed, primarily by water vapor and carbon dioxide gas. With respect to the Earth, this green-house effect is known as the because the phenomenon is caused by gasses in the atmosphere instead of glass or plastic.

The helps to keep the Earth’s temperature about 40 °C warmer than it would be without an atmosphere, which is a generally a good thing for us because most water on Earth would be frozen otherwise. Humans have established our modern infrastructure in accordance with the global climate that was present over the last few hundred years, but emission of carbon dioxide and methane (and other greenhouse gases) into Earth’s atmosphere from human activities strengthens the and increases the average temperature of the Earth.  Higher temperature means more thermal energy is available to drive more powerful and other thermodynamic processes that define weather and climate. The resulting changes in global climate are likely to cause a variety of dangerous and expensive consequences such as higher storm intensity, rising sea levels, and increased flooding in certain areas with prolonged drought in others.[5][6]
The following simulation allows you to examine how the works. 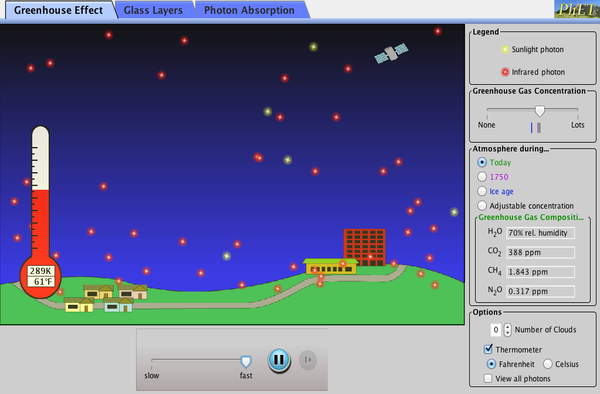 a device that measures temperature

Electromagnetic radiation spontaneously emitted by all objects with temperature above absolute zero.

Elevation of Earth's temperature relative to the atmosphere-free condition caused differential absorption of UV, visible, and IR light by specific gases and particles present in the atmosphere.