Certain prokaryotes, including some species of bacteria and Archaea, use anaerobic respiration. For example, the group of Archaea called methanogens reduces carbon dioxide to methane to oxidize NADH. These microorganisms are found in soil and in the digestive tracts of ruminants, such as cows and sheep. Similarly, sulfate-reducing bacteria and Archaea, most of which are anaerobic (Figure 8), reduce sulfate to hydrogen sulfide to regenerate NAD+ from NADH. 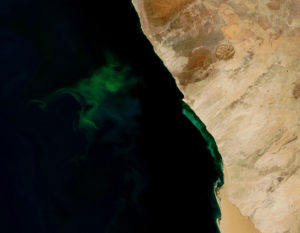 Other fermentation methods occur in bacteria. Many prokaryotes are facultatively anaerobic. This means that they can switch between aerobic respiration and fermentation, depending on the availability of oxygen. Certain prokaryotes, like Clostridia bacteria, are obligate anaerobes. Obligate anaerobes live and grow in the absence of molecular oxygen. Oxygen is a poison to these microorganisms and kills them upon exposure. It should be noted that all forms of fermentation, except lactic acid fermentation, produce gas. The production of particular types of gas is used as an indicator of the fermentation of specific carbohydrates, which plays a role in the laboratory identification of the bacteria. The various methods of fermentation are used by different organisms to ensure an adequate supply of NAD+ for the sixth step in glycolysis. Without these pathways, that step would not occur, and no ATP would be harvested from the breakdown of glucose.