At this point, it should be clear that eukaryotic cells have a more complex structure than do prokaryotic cells. Organelles allow for various functions to occur in the cell at the same time. Before discussing the functions of organelles within a eukaryotic cell, let us first examine two important components of all cells (prokaryotic and eukaryotic): the plasma membrane and the cytoplasm. 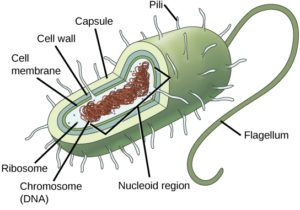 Like prokaryotes, eukaryotic cells have a plasma membrane (Find it in Figures 1-3, then look at the detailed structure in Figure 4) made up of a phospholipid bilayer with embedded proteins that separates the internal contents of the cell from its surrounding environment. A phospholipid is a lipid molecule composed of two fatty acid chains, a glycerol backbone, and a phosphate group. The plasma membrane regulates the passage of some substances, such as organic molecules, ions, and water, preventing the passage of some to maintain internal conditions, while actively bringing in or removing others. Other compounds move passively across the membrane.

The plasma membranes of cells that specialize in absorption are folded into fingerlike projections called microvilli(singular = microvillus). This folding increases the surface area of the plasma membrane. Such cells are typically found lining the small intestine, the organ that absorbs nutrients from digested food (Figure 5). This is an excellent example of form matching the function of a structure.

The cytoplasm comprises the contents of a cell between the plasma membrane and the nuclear envelope (a structure to be discussed shortly). It is made up of organelles suspended in the gel-like cytosol, the cytoskeleton, and various chemicals (Find it in Figures 1-3). Even though the cytoplasm consists of 70 to 80 percent water, it has a semi-solid consistency, which comes from the proteins within it. However, proteins are not the only organic molecules found in the cytoplasm. Glucose and other simple sugars, polysaccharides, amino acids, nucleic acids, fatty acids, and derivatives of glycerol are found there too. Ions of sodium, potassium, calcium, and many other elements are also dissolved in the cytoplasm. Many metabolic reactions, including protein synthesis, take place in the cytoplasm. Take note that the cytoplasm is not “empty” or “filler” – it is a vitally important component of cells that allows chemical reactions to take place!