This system used to be called the English system, but now the U.S. has the dubious honor of being associated with the system that uses inches, feet, miles, ounces, pounds, cups, gallons, etc. To convert from one unit to another, we often have to perform messy calculations like dividing by

We could solve these unit conversions using proportions, but there is another method than is more versatile, especially when a conversion requires more than one step. This method goes by various names, such as dimensional analysis or the factor label method. The basic idea is to begin with the measurement you know, then multiply it by a conversion ratio that will cancel the units you don’t want and replace it with the units you do want.

1. How many inches are in

2. How many feet make up

yard is equal to how many inches?

mile is equivalent to how many yards?

feet is what length in yards?

8. How many yards are the same as

Notice that Exercises 3 & 4 give us two more conversion ratios that we could add to our list.

9. How many ounces are in

10. How many pounds are equivalent to

ton is equivalent to what number of ounces?

There are plenty of other conversions that could be provided, such as the number of fluid ounces in a gallon, but let’s keep the list relatively short.

13. How many fluid ounces are in

gallon is equal to how many pints?

18. How many fluid ounces are in one half gallon?

Measurements are frequently given with mixed units, such as a person’s height being given as

in, or a newborn baby’s weight being given as

oz. This can sometimes make the calculations more complicated, but if you can convert between improper fractions and mixed numbers, you can handle this.

ounces. What is its weight in pounds and ounces?

20. A carton of orange juice contains

inches long. Give its length in feet and inches.

22. The maximum loaded weight of a Ford F-150 pickup truck is

lb. Convert this weight into tons and pounds.

We’ll finish up this module by adding and subtracting with mixed units. Again, it may help to think of them as mixed numbers, with a whole number part and a fractional part. 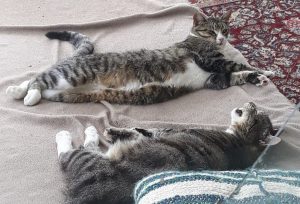 23. Comet and Fred are being put into a cat carrier together. What is their combined weight?

24. How much heavier is Fred than Comet?

25. If the two tables are placed end to end, what is their combined length?

26. What is the difference in length between the two tables?