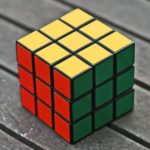 Just as we saw with area, converting between units of volume requires us to be careful because cubic units behave differently than linear units.

Quantities of mulch, dirt, or gravel are often measured by the cubic yard. How many cubic feet are in one cubic yard?

cube, which shows us that

means that that the conversion ratio for the volumes is

Here’s another way to think about it without a diagram:

. To remove the parentheses, we must cube the number and cube the units:

More generally, we need to cube the linear conversion factors when converting units of volume. If the linear units have a ratio of

, the cubic units will have a ratio of

1. Determine the number of cubic inches in

2. Determine the number of cubic inches in

3.  Determine the number of cubic millimeters in

4.  Determine the number of cubic centimeters in

5. True story: A friend at the National Guard base gave us three long wooden crates to use as raised planting beds. (The crates probably carried some kind of weapons or ammunition, but our friend wouldn’t say.) Henry, who was taking geometry in high school, was asked to measure the crates and figure out how much soil we needed. The inside dimensions of each crate were

inches deep. We wanted to fill them most of the way full with soil, leaving about

inches empty at the top. How many cubic yards of soil did we need to order from the supplier?

6. True story, continued: I decided to check our answer and did a rough estimate by rounding each dimension to the nearest foot, then figuring out the volume from there. Did this give the same result?

We can convert between units of volume and liquid capacity. As you might expect, the numbers are messy in the U.S. system.

7. A wading pool has a diameter of roughly

feet and a depth of

inches. How many gallons of water are required to fill it about

of the way full?

8. A standard U.S. soda pop can has a diameter of

inches and a height of

inches. Verify that the can is able to hold

9. A can of Perrier mineral water has a diameter of

and a height of

. Verify that the can is able to hold

Both Systems: Converting Measurements of Volume

Converting between the U.S. and metric systems will of course involve messy decimal values. For example, because

, we can cube both numbers and find that

. The conversions are rounded to three or four significant figures in the table below. 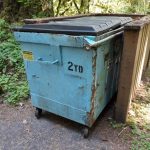 15. The standard size of a gold bar in the U.S. Federal Reserve is

inches.[1] The density of gold is

pounds per per cubic inch. How much does one gold bar weigh?

16. A cylindrical iron bar has a diameter of

centimeters and a length of

centimeters. The density of iron is

grams per cubic centimeter. What is the bar’s mass, in kilograms?

Earlier in this module, it was stated that if the linear units have a ratio of

, the cubic units will have a ratio of

. This applies to similar solids as well.

, then the volumes will have a ratio of

We’ll verify this in the following exercises.

A table tennis (ping pong) ball has a diameter of

centimeters. A wiffle® ball has a diameter twice that of a table tennis ball.

17. Determine the volume of the wiffle® ball.

18. Determine the volume of the table tennis ball.

19. What is the ratio of the volumes of the two balls?

has dimensions triple those of

20. Determine the volume of the larger solid,

21. Determine the volume of the smaller solid,

22. What is the ratio of the volumes of the two solids?