You may use a calculator in this module as needed. 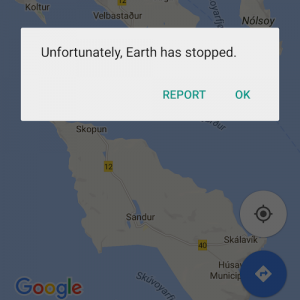 You probably know all of the necessary conversions for time. When we get to units of time larger than weeks, however, we encounter problems because not all months have the same number of days, a year is not exactly

weeks, and the time it takes for the Earth to orbit the Sun is not exactly

days. Therefore, it doesn’t make sense to expect an exact answer to a question like “how many minutes are in one month?” We will have to use our best judgment in situations such as these.

1. How many minutes is one standard

2. Have you been alive for

billion seconds? Is this even possible?

Usain Bolt holds the world record time for the

3. What was his average speed in kilometers per hour?

4. What was his average speed in miles per hour?

The more information we know, the more things we can figure out. 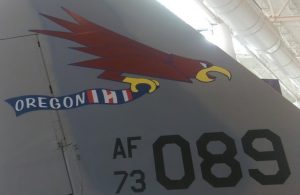 times the speed of sound, which is

5. What is the jet’s top speed in miles per hour?

6. At this speed, how many miles would the jet travel in one minute?

miles at top speed, for how many minutes will it fly?

The jet’s maximum fuel capacity is

gallons of fuel, find the jet’s fuel efficiency, in miles per gallon.

9. Rewrite the jet’s fuel efficiency, in gallons per mile.

10. How many gallons of fuel does the jet consume in one minute?

Now let’s turn our attention to converting units based on their prefixes. We’ll start with large units of measure.

Notice that the powers of these units are multiples of

, just as with the engineering notation we saw in a previous module. Each prefix is

times the next smaller prefix, so moving one place in the chart means moving the decimal point three places. Also notice that capitalization is important; megagram (which is also called a metric ton) is Mg with a capital M, but milligram is mg with a lowercase m.

Using computer memory as an example:

Note: There can be inconsistencies with different people’s understanding of these prefixes with regards to computer memory, which is counted in powers of

, which is very close to

. However, we will consider these prefixes to be powers of

. There is an explanation at https://physics.nist.gov/cuu/Units/binary.html. 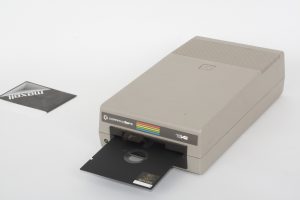 inch floppy disk from the 1980s could store about

inch floppy disk from the 1990s could store about

MB. By what factor was the storage capacity increased?

12. How many times greater is the storage capacity of a

TB hard drive than a

13. In an article describing small nuclear reactors that are designed to be retrofitted into coal plants, Dr. Jose Reyes of Oregon State University says “One module will produce

megawatts of electricity. That’s enough for about

thousand homes.”[3] How much electricity per home is this?

megawatt module could produce about

million gallons of clean water per day using existing technologies in reverse osmosis.” What is the rate of watts per gallon?

15. The destructive power of nuclear weapons is measured in kilotons (the equivalent of

tons of TNT) or megatons (the equivalent of

tons of TNT). The first nuclear device ever tested, the US’s Trinity, was measured at roughly

kilotons on July 16, 1945. The largest thermonuclear weapon ever detonated, at

megatons, was the USSR’s Tsar Bomba, on October 31, 1961.[4] (Video of Tsar Bomba was declassified almost 60 years later, in August 2020.) How many times more powerful was Tsar Bomba than Trinity?

Now we’ll go in the other direction and look at small units of measure.

The symbol for micro- is the Greek letter μ (pronounced “myoo”). Because this character can be difficult to replicate, you may see the letter “u” standing in for “μ” in web-based or plaintext technical articles… or you may see the prefix “mc” instead.

Again, the powers are multiples of

; each prefix gets smaller by a factor of

. The negative exponents can sometime be complicated to work with, and it may help to think about things in reverse.

16. An article about network latency compares the following latency times: “So a

milliseconds to the RTT, a

17. The wavelength of red light is around

nm. Infrared radiation has a wavelength of approximately

μm.[6] Find the ratio of these wavelengths.

18. Nuclear radiation is measured in units called Sieverts, but because this unit is too large to be practical when discussing people’s exposure to radiation, milliSieverts and microSieverts are more commonly used. In 1986, workers cleaning up the Chernobyl disaster were exposed to an estimated dose of

mSv.[7] A typical chest x-ray exposes a person to

μSv.[8] How many chest x-rays’ worth of radiation were the workers exposed to?