The human body uses carbohydrate, fat, and protein in food and from body stores for energy to fuel physical activity. These essential nutrients are needed regardless of the intensity of the activity you are doing. If you are lying down and reading a book or running a marathon, these macronutrients are always needed in the body. However, in order for these nutrients to be used as fuel for the body, their energy must be transferred into the high energy molecule known as adenosine triphosphate (ATP). ATP is the body’s immediate fuel source and can be generated either with in the presence of oxygen or without the presence of oxygen. The type of metabolism that is predominately used during physical activity is determined by the availability of oxygen and how much carbohydrate, fat, and protein are used. 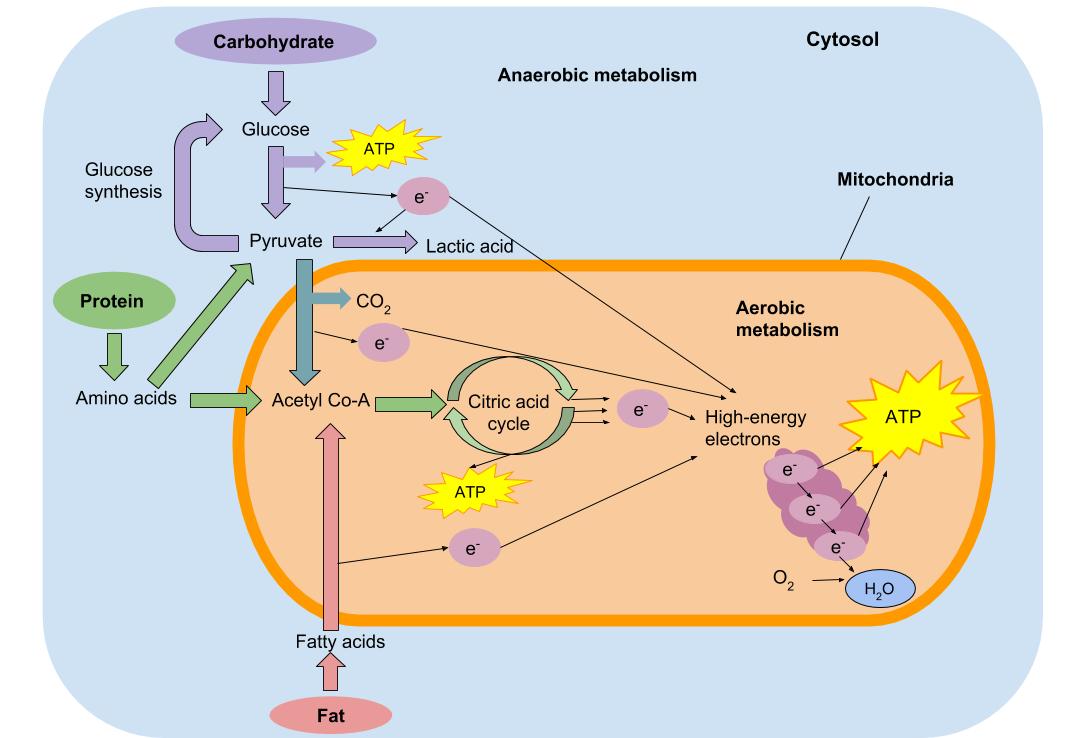 Physical Activity Duration and Fuel Use

The respiratory system plays a vital role in the uptake and delivery of oxygen to muscle cells throughout the body. Oxygen is inhaled by the lungs and transferred from the lungs to the blood, where the cardiovascular system circulates the oxygen-rich blood to the muscles. The oxygen is then taken up by the muscles and can be used to generate ATP. When the body is at rest, the heart and lungs are able to supply the muscles with adequate amounts of oxygen to meet the energy needs for aerobic metabolism. However, during physical activity, your muscles need more energy and oxygen. In order to provide more oxygen to the muscle cells, your heart rate and breathing rate will increase. The amount of oxygen that is delivered to the tissues via the cardiovascular and respiratory systems during exercise depend on the duration, intensity and physical conditioning of the individual. 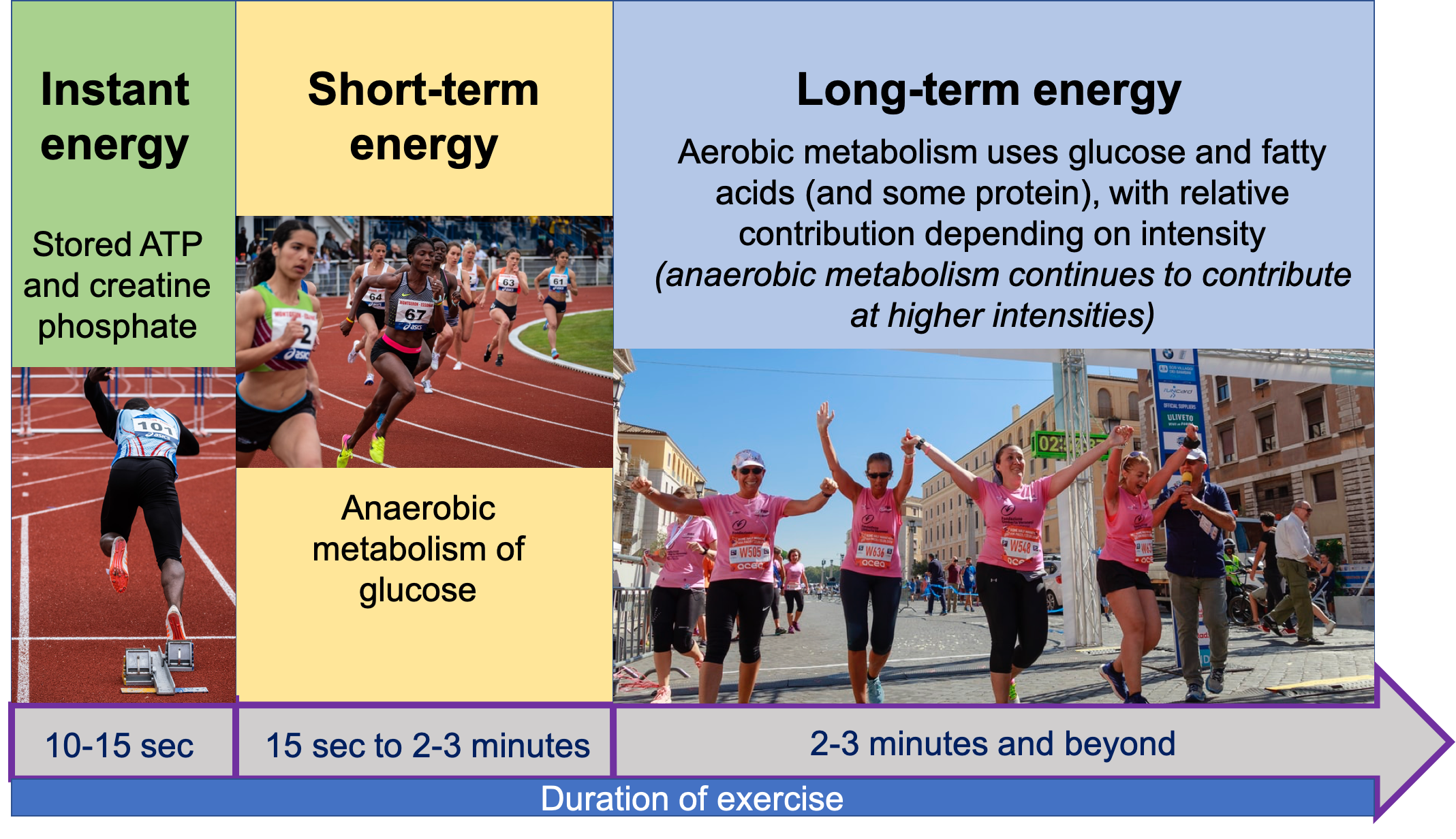 Figure 10.2. Energy systems used to fuel exercise change with duration of exercise. The ATP-creatine phosphate system is used up within seconds. The short-term and long-term systems kick in and provide energy for exercise as the duration of the workout goes on.

The fuel sources for anaerobic and aerobic metabolism will change depending on the amount of nutrients available and the type of metabolism. 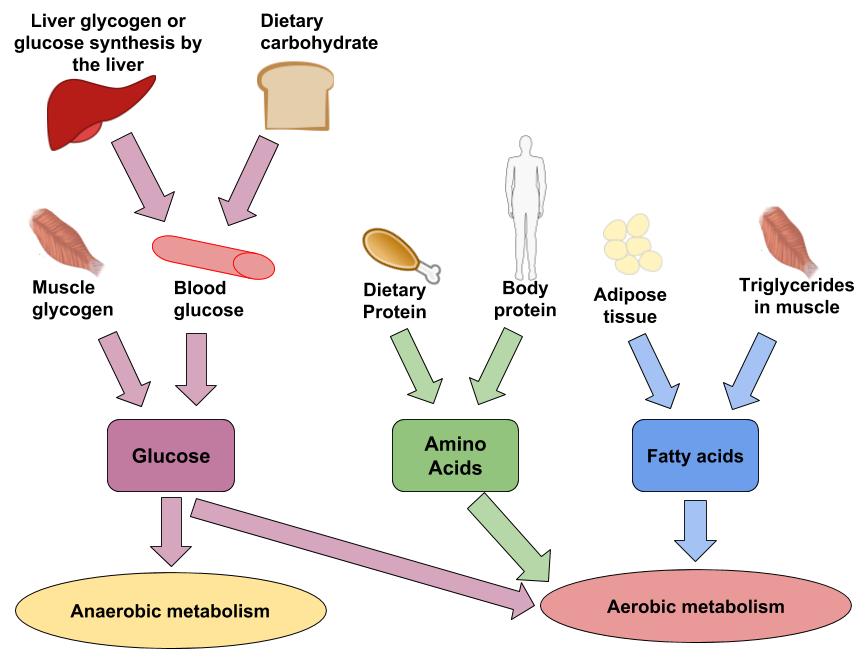 Figure 10.3. Fuel sources for anaerobic and aerobic metabolism. Both dietary sources and body storage of carbohydrates, fat, and protein can all be used to fuel activity. Amount varies depending on duration and intensity of the activity.

Physical Activity Intensity and Fuel Use

Table 10.2. Summary of fuels used for activities of different intensities and durations. 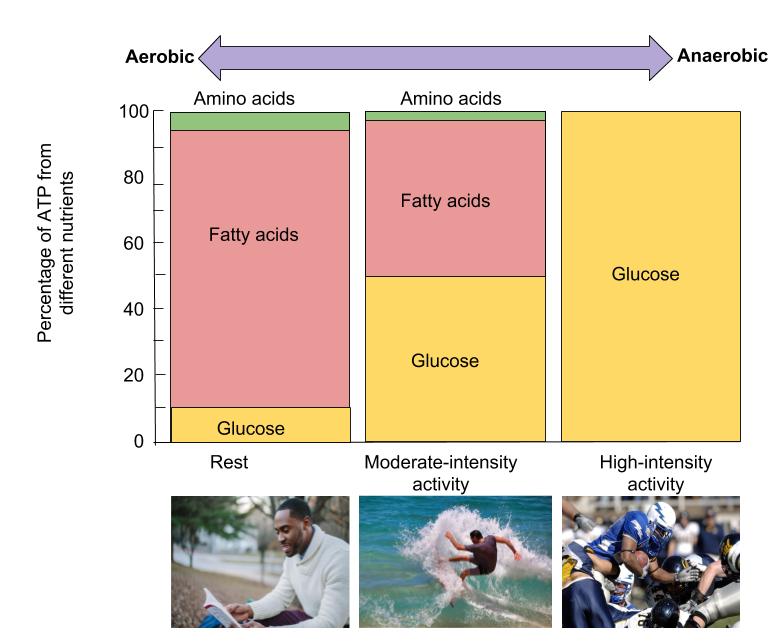 Figure 10.4. The effect of exercise intensity on fuel sources. Anaerobic exercise utilizes only glucose for fuel. As activities become more aerobic, the body can utilize fatty acids and, to a small extent, amino acids, for energy production.

One important clarification about exercise intensity and fuel sources is the concept of the fat-burning zone. Many people think that in order to lose body fat, they should exercise at a lower intensity so that fat is the primary fuel source. The fat-burning zone is typically referred to as a low-intensity aerobic activity that keeps your heart rate between 60 and 69 percent of maximum heart rate. The cardio zone, on the other hand, is a high-intensity aerobic activity that keeps the heart rate between about 70 and 85 percent of maximum heart rate. So which zone do you burn the most fat in? Technically, your body burns a higher percentage of calories from fat during a low-intensity aerobic activity. When you begin a low-intensity activity, about 50% of the calories burned come from fat, whereas in the cardio zone only 40% come from fat. However, this isn’t the whole story. High-intensity activity burns more total calories per minute. At this higher rate of energy expenditure, you can burn just as much or more total fat and more total calories as during a lower intensity activity. If weight loss is one of your goals, high-intensity activities will burn more total calories, helping to shift to negative energy balance, and will promote a greater level of fitness. However, the best exercise program is one that is enjoyable, sustainable, and safe for you; if you’re just starting out, it’s wise to begin with low- to moderate-intensity activities and work your way up from there. 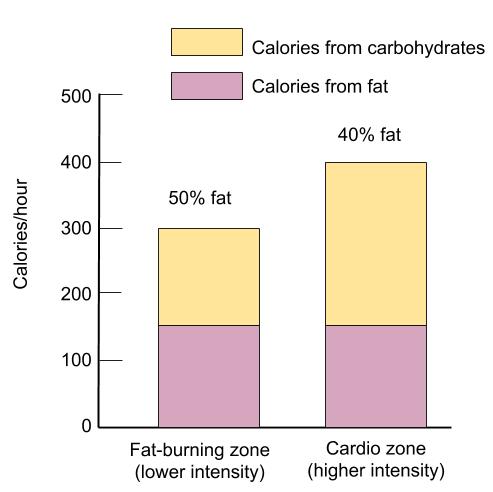 The metabolic pathways that require oxygen to generate ATP for cells.

The metabolic system that can generate ATP without oxygen.

A high-energy molecule that can be used to generate ATP for cells during the first 10 seconds of an activity.