Since the 1980s, the prevalence of obesity in the United States has increased dramatically. Data collected by the Centers for Disease Control and Prevention show rising obesity across the nation, state-by-state.1 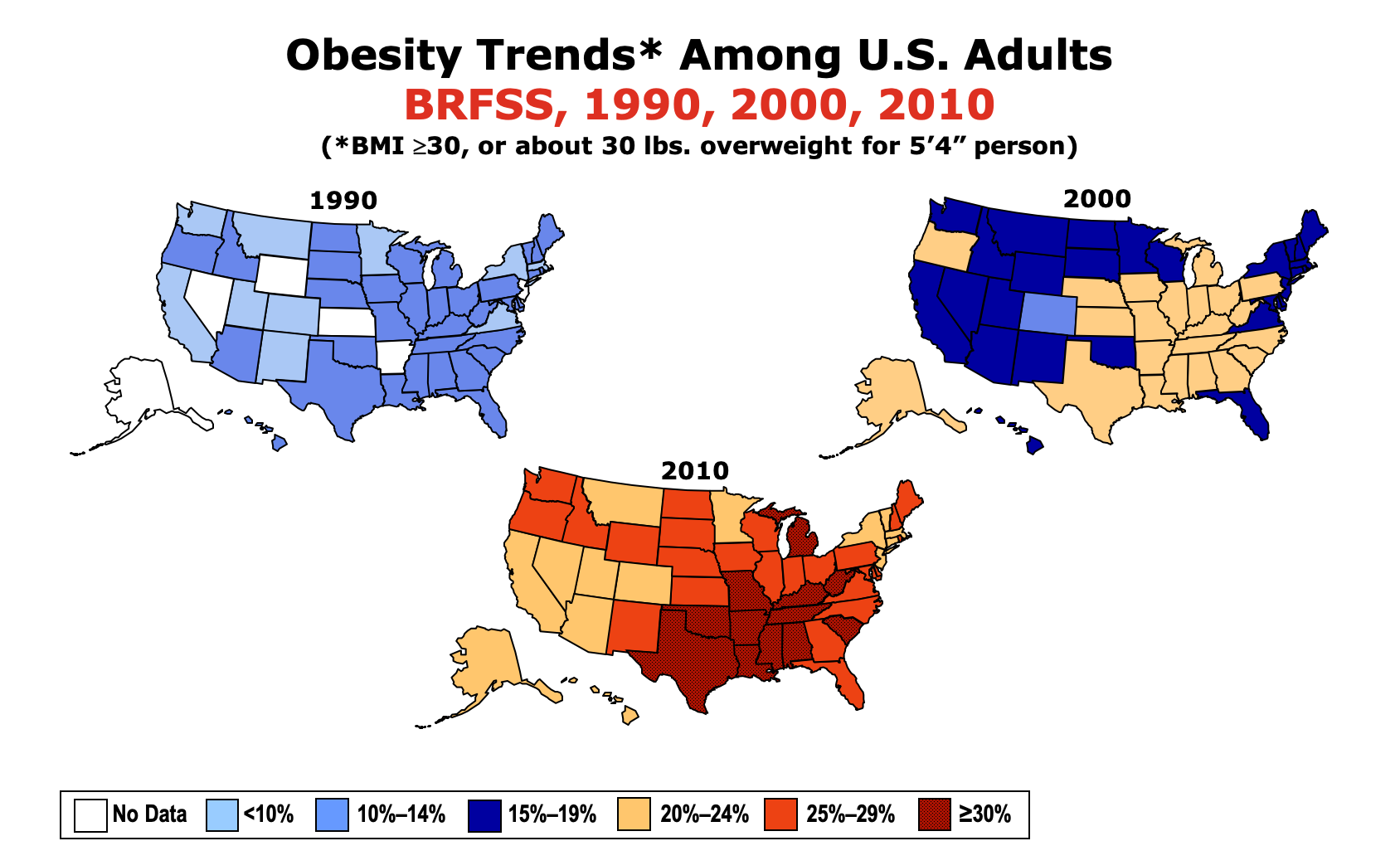 Figure 7.17. Each year since 1990, the CDC has published maps of the United States in which states are color-coded based on the percentage of their population estimated to be obese. The maps show a clear increase in the prevalence of obesity between 1990 and 2010.

The methods used by the CDC to collect the data changed in 2011, so we can’t make direct comparisons between the periods before and after that change, but the trend has continued. Every year, more and more people in the U.S. are obese. 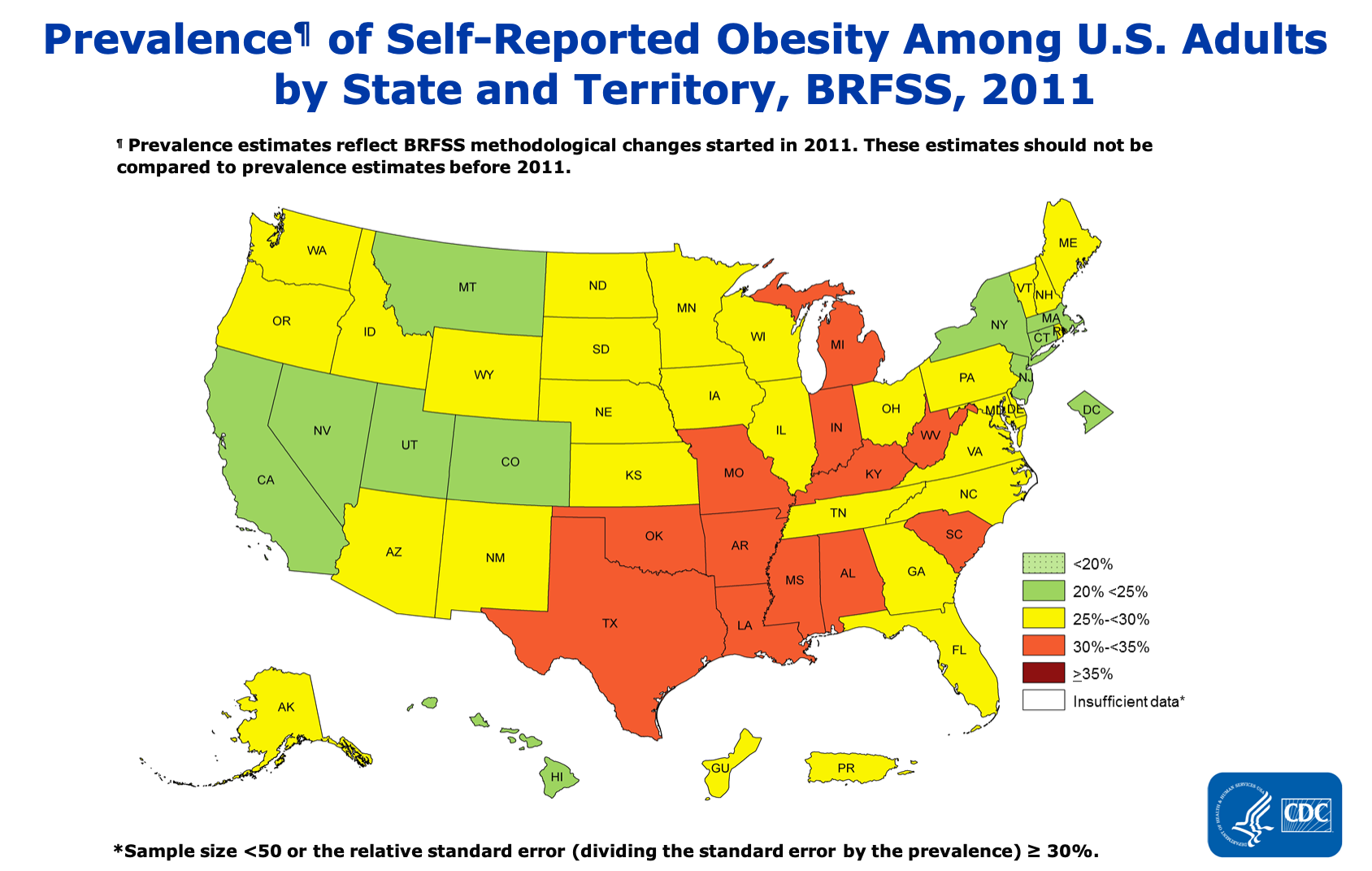 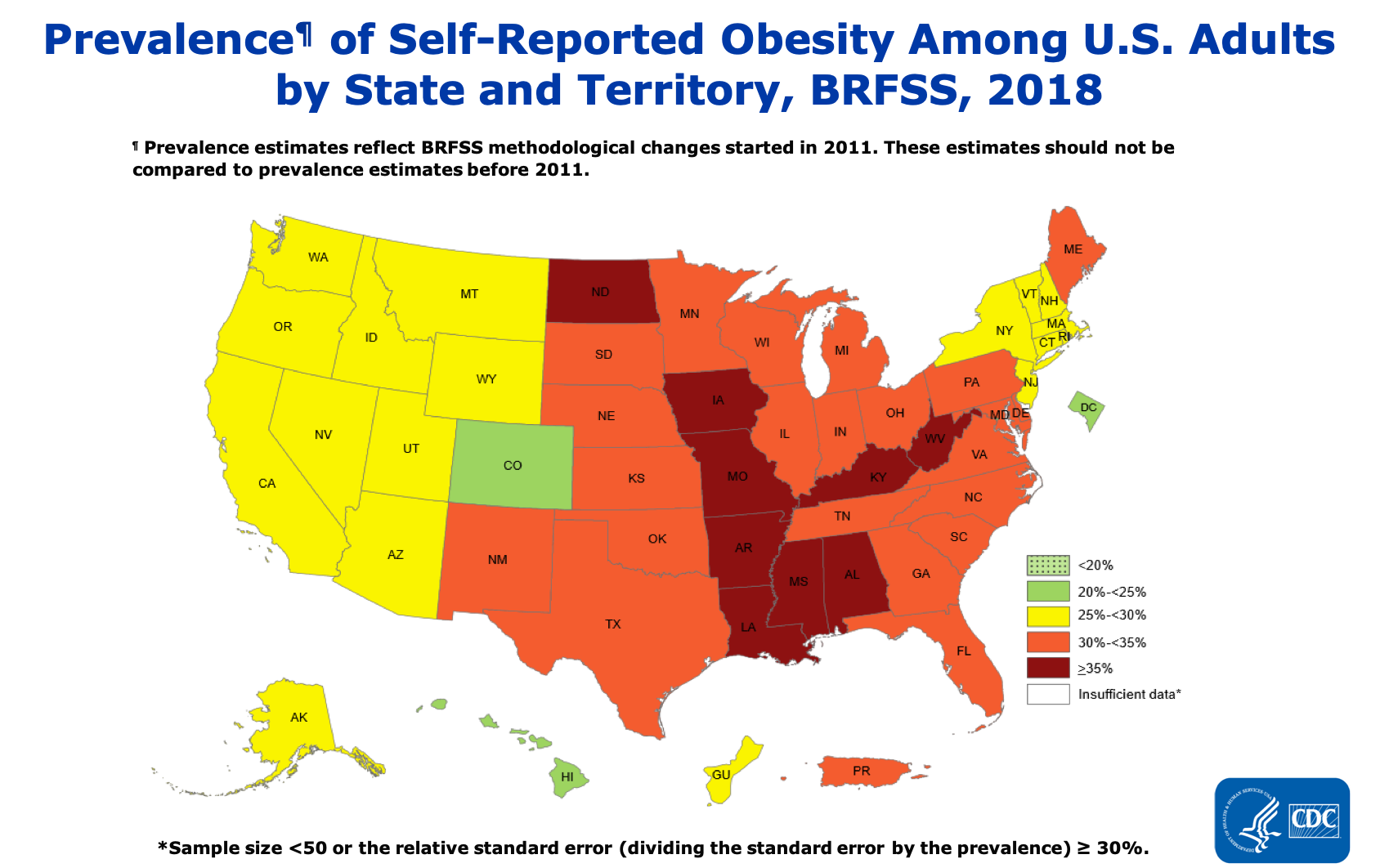 These trends are unmistakable, and they’re not just occurring in adults. Childhood obesity has seen similar increases over the last few decades—perhaps an even greater concern as the metabolic and health effects of carrying too much weight can be compounded over a person’s entire lifetime. 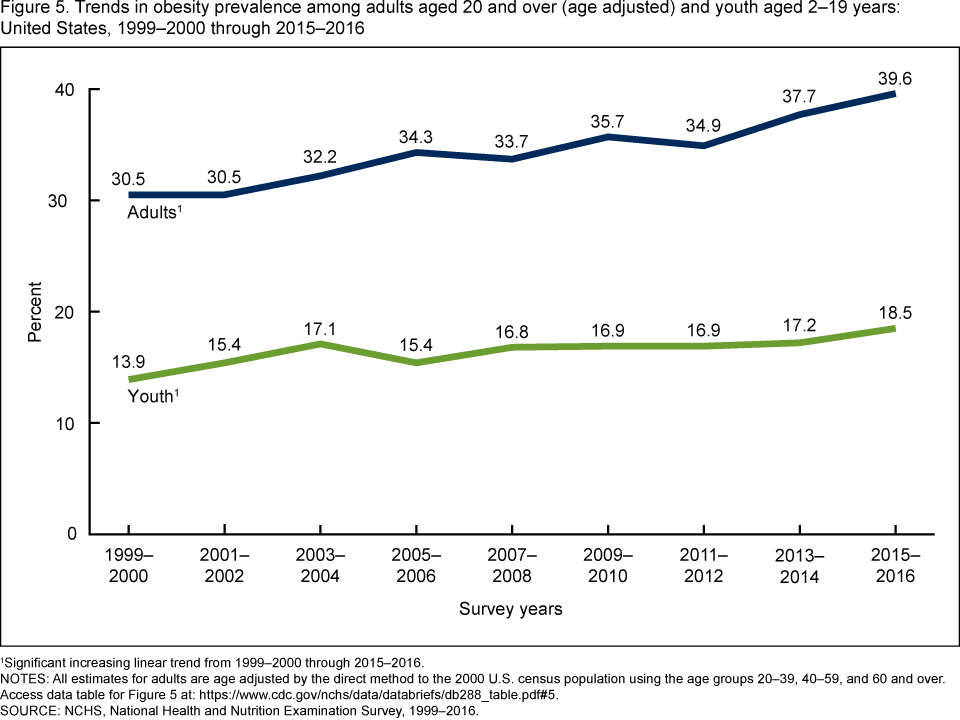 Figure 7.19. Between 1999 and 2016, the prevalence of obesity in both children and adults has risen steadily.

While obesity is a problem across the United States, it affects some groups of people more than others. Based on 2015-2016 data, obesity rates are higher among Hispanic (47 percent) and Black adults (47 percent) compared with white adults (38 percent). Non-Hispanic Asians have the lowest obesity rate (13 percent). And overall, people who are college-educated and have a higher income are less likely to be obese.2 These health disparities point to the importance of looking at social context when examining causes and solutions. Not everyone has the same opportunity for good health, or an equal ability to make changes to their circumstances, because of factors like poverty and longstanding inequities in how resources are invested in communities. These factors are called “.”3

The obesity epidemic is also not unique to the United States. Obesity is rising around the globe, and in 2015, it was estimated to affect 2 billion people worldwide, making it one of the largest factors affecting poor health in most countries .4 Globally, among children aged 5 to 19 years old, the rate of overweight increased from 10.3 percent in 2000 to 18.4 percent in 2018. Previously, overweight and obesity mainly affected high-income countries, but some of the most dramatic increases in childhood overweight over the last decade have been in low income countries, such as those in Africa and South Asia, corresponding to a greater availability of inexpensive, processed foods.5

Despite the gravity of the problem, no country has yet been able to implement policies that have reversed the trend and brought about a decrease in obesity. This represents “one of the biggest population health failures of our time,” wrote an international group of researchers in the journal The Lancet in 2019.6 The World Health Organization has set a target of stopping the rise of obesity by 2025. Doing so requires understanding what is causing the obesity epidemic; it is only when these causes are addressed that change can start to occur.

Causes of the Obesity Epidemic

If obesity was an infectious disease sweeping the globe, affecting billions of people’s health, longevity, and productivity, we surely would have addressed it by now. Researchers and pharmaceutical companies would have worked furiously to develop vaccines and medicines to prevent and cure this disease. But the causes of obesity are much more complex than a single bacteria or virus, and solving this problem means recognizing and addressing a multitude of factors that lead to weight gain in a population.

At its core, rising obesity is caused by a chronic shift towards positive energy balance—consuming more energy or calories than one expends each day, leading to an often gradual but persistent increase in body weight. People often assume that this is an individual problem, that those who weigh more simply need to change their behavior to eat less and exercise more, and if this doesn’t work, it must be because of a personal failing, such as a lack of self-control or motivation. While behavior patterns such as diet and exercise can certainly impact a person’s risk of developing obesity (as we’ll cover later in this chapter), the environments where we live also have a big impact on our behavior and can make it much harder to maintain energy balance.

Many of us live in what researchers and public health experts call That is, the ways in which our neighborhoods are built and our lives are structured influence our physical activity and food intake to encourage weight gain .7 Human physiology and metabolism evolved in a world where obtaining enough food for survival required significant energy investment in hunting or gathering—very different from today’s world where more people earn their living in sedentary occupations. From household chores, to workplace productivity, to daily transportation, getting things done requires fewer calories than it did in past generations.

Figure 7.20. Some elements of our environment that may make it easier to gain weight include sedentary jobs, easy access to inexpensive calories, and cities built more for car travel than for physical activity.

Our jobs have become more and more sedentary, with fewer opportunities for non-exercise thermogenesis (NEAT) throughout the day. There’s less time in the school day for recess and physical activity, and fears about neighborhood safety limit kids’ ability to get out and play after the school day is over. Our towns and cities are built more for cars than for walking or biking. We can’t turn back the clock on human progress, and finding a way to stay healthy in obesogenic environments is a significant challenge.

Our environments can also impact our food choices. We’re surrounded by vending machines, fast food restaurants, coffeeshops, and convenience stores that offer quick and inexpensive access to calories. These foods are also heavily advertised, and especially when people are stretched thin by working long hours or multiple jobs, they can be a welcome convenience. However, they tend to be calorie-dense (and less nutrient-dense) and more heavily processed, with amounts of sugar, fat, and salt optimized to make us want to eat more, compared with home-cooked food. In addition, portion sizes at restaurants, especially fast food chains, have increased over the decades, and people are eating at restaurants more and cooking at home less.

Living in poverty usually means living in a more obesogenic environment. Consider the fact that some of the poorest neighborhoods in the United States—with some of the highest rates of obesity—are often not safe or pleasant places to walk, play, or exercise. They may have busy traffic and polluted air, and they may lack sidewalks, green spaces, and playgrounds. A person living in this type of neighborhood will find it much more challenging to get adequate physical activity compared with someone living in a neighborhood where it’s safe to walk to school or work, play at a park, ride a bike, or go for a run.

In addition, poor neighborhoods often lack a grocery store where people can purchase fresh fruits and vegetables and basic ingredients necessary for cooking at home. Such areas are called “”—where healthy foods simply aren’t available or easily accessible.

Another concept useful in discussions of obesity risk is “food insecurity.”  means “access by all people at all times to enough food for an active, healthy life.”8  means an inability to consistently obtain adequate food. It may seem counter-intuitive, but in the United States, food insecurity is linked to obesity. That is, people who have difficulty obtaining enough food are more likely to become obese and to suffer from diabetes and hypertension. This is likely related to the fact that inexpensive foods tend to be high in calories but low in nutrients, and when these foods form the foundation of a person’s diet, they can cause both obesity and nutrient deficiencies. It’s estimated that 12 percent of U.S. households are food insecure, and food insecurity is higher among Black (22 percent) and Latino (18 percent) households.3

What about genetics? While it’s true that our genes can influence our susceptibility to becoming obese, researchers say they can’t be a cause of the obesity epidemic. Genes take many generations to evolve, and the obesity epidemic has occurred over just the last 40 to 50 years—only a few generations. When our grandparents were children, they were much less likely to become obese than our own children. That’s not because their genes were different, but rather because they grew up in a different environment. However, it is true that a person’s genes can influence their susceptibility to becoming obese in this obesogenic environment, and obesity is more prevalent in some families. A person’s genetic make-up can make it more difficult to maintain energy balance in an obesogenic environment, because certain genes may make you feel more hungry or slow your energy expenditure.2

Solutions to the Obesity Epidemic

Given the multiple causes of obesity, solving this problem will also require many solutions at different levels. Because obesity affects people over the lifespan and is difficult to reverse, the focus of many of these efforts is prevention, starting as early as the first years of life. We’ll discuss individual weight management strategies later in this chapter. Here, we’ll review some strategies happening in schools, communities, and at the state and federal levels.

Interventions that support healthy dietary patterns, especially among people more vulnerable because of food insecurity or poverty, may reduce obesity. In some cases, studies have shown that they have an impact, and in other cases, it’s too soon to know. Here are some examples:

Figure 7.22. As of 2018, restaurant chains and some other food vendors are required to list calorie counts on their menus. Would these make you pause before ordering?

Increasing physical activity increases the energy expended during the day. This can help maintain energy balance, thus preventing weight gain. It may also help to shift a person into negative energy balance and facilitate weight loss if needed. But simply adding an exercise session—a run or a trip to the gym, say—often doesn’t shift energy balance (though it’s certainly good for health). Why? Exercise can increase hunger, and there’s only so many calories a person can burn in 30 or 60 minutes. That’s why it’s also important to look for opportunities for non-exercise activity thermogenesis (NEAT); that is, find ways to increase movement throughout the day.

Figure 7.23. There are lots of ways to increase physical activity, including walking to work, playing with friends, and going for a bike ride.

VIDEO:  “James Levine: ‘I Came Alive as a Person’“ by NOVA’s Secret Life of Scientists and Engineers, YouTube (April 24, 2014), 3:04 minutes. This short video explains some of the research on NEAT and efforts to increase it in our lives.

Economic and social circumstances, such as poverty and racism, that impact health.

Having consistent access to enough food for an active, healthy life.

Having inconsistent access to enough food for an active, healthy life.