Vision is one of our five basic senses, and unless you’ve experienced vision loss, it’s hard to imagine life without sight. Vitamin A plays a key role in vision and eye health. On this page, we’ll cover the functions, food sources, and signs of deficiency and toxicity for vitamin A and carotenoids such as beta-carotene, which can be converted to vitamin A.

This differentiates it from and other compounds, which are brightly-colored yellow, orange, and red pigments synthesized by plants. These are called A carotenoids, because they can be converted to vitamin A in the body. Among the carotenoids, beta-carotene is most efficiently converted to vitamin A. If you look at the beta-carotene molecule, you can see that it looks like two retinol molecules connected together. Enzymes in the intestine and liver can cleave the beta-carotene molecule in half, creating two new molecules of vitamin A. 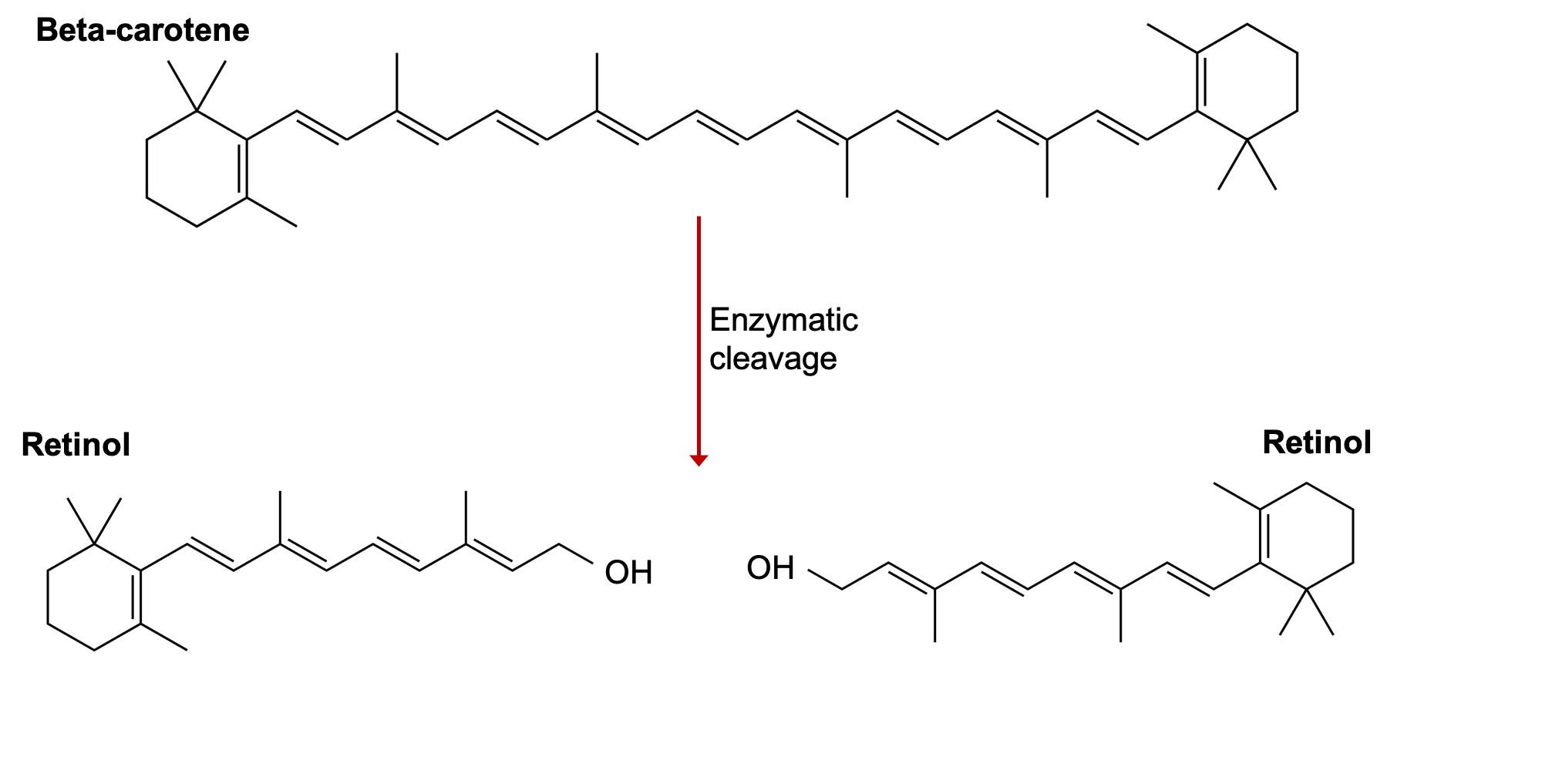 Figure 8.19. One molecule of beta-carotene can be enzymatically cleaved to 2 molecules of vitamin A.

As with other fat-soluble vitamins, vitamin A is packaged into chylomicrons in the enterocytes of the small intestine and then transported to the liver. The liver stores and exports vitamin A as needed; it is released into the blood bound to a retinol-binding protein, which transports it to cells. Beta-carotene can be converted into vitamin A in the intestine, or it can be absorbed intact, packaged in chylomicrons, and then transported around the body in lipoproteins. Beta-carotene and other carotenoids that aren’t converted to vitamin A can also act as powerful antioxidants and have other helpful functions in the body, which may in part explain the health benefits of a diet rich in fruits and vegetables.

The retinoids are aptly named, as their most notable function is in the retina of the eye. Retinol that is circulating in the blood is taken up by cells in the retina, where it is converted to retinal and is used as part of the pigment . Rhodopsin is especially important to our ability to see in low-light conditions. When light hits rhodopsin in the eye, a nerve signal is sent to the brain, allowing us to detect that light. A person that is deficient in vitamin A has less rhodopsin pigment in the eye and is therefore less able to detect low-level light. This makes it more difficult to see at night, a condition referred to as , and this is one of the first signs that a person is deficient in vitamin A. 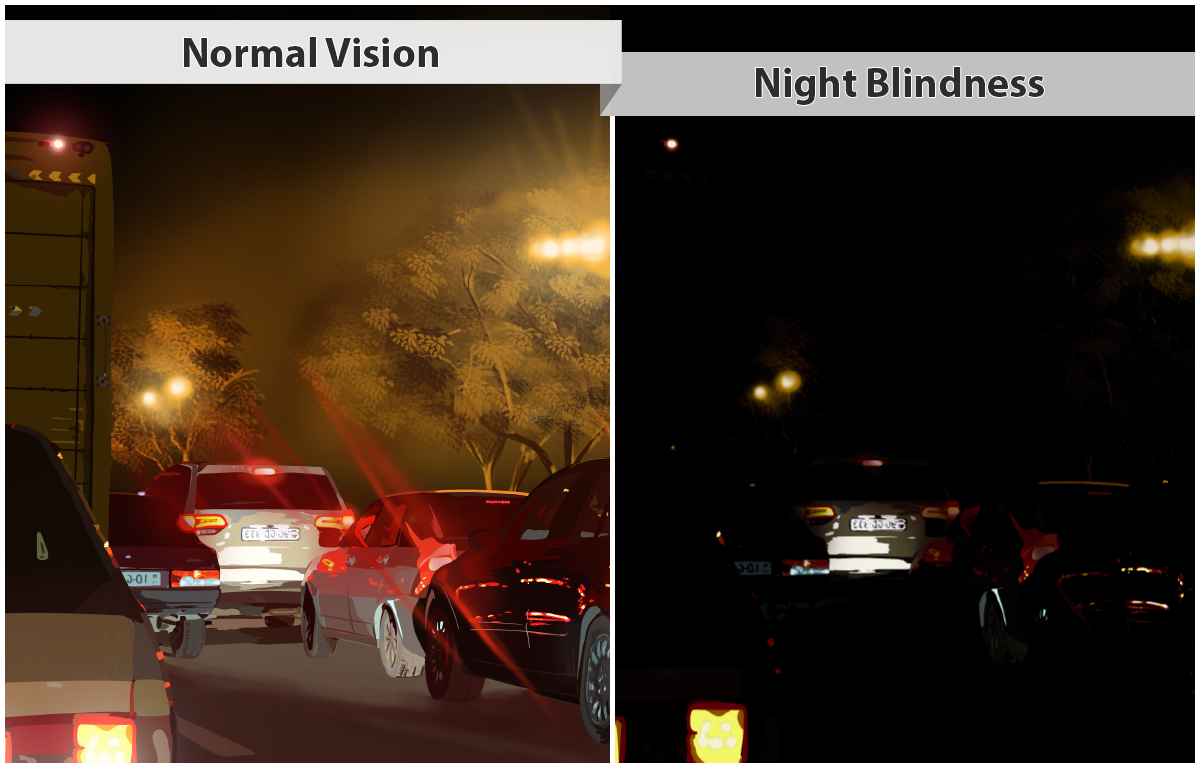 Figure 8.20. A depiction of the vision of a person suffering from night blindness, in which there is inadequate rhodopsin for detection of light.

Vitamin A is also required for normal , the process by which cells change from stem cells to more specialized cells with specific structure and function. Cellular differentiation is important in every tissue of the body, but if there is a shortage of vitamin A, the eye is one of the first areas to be impacted. Specialized cells in the lining of the eyes produce mucus and tears, which keep eyes moist and lubricated. When the mucus-secreting cells die, they need to be replaced with new cells. If the body is deficient in vitamin A, those new cells don’t differentiate normally, resulting in dry eyes, a condition called . Instead of producing mucus, these dysfunctional cells produce a protein called keratin. is a hard, structural protein that is found in nails, hair, and the outer layer of skin, and you can imagine the problems it causes when it accumulates in the eye. Instead of a moist, well-lubricated eye, keratin makes the eye hard and dry, resulting in clouded vision. 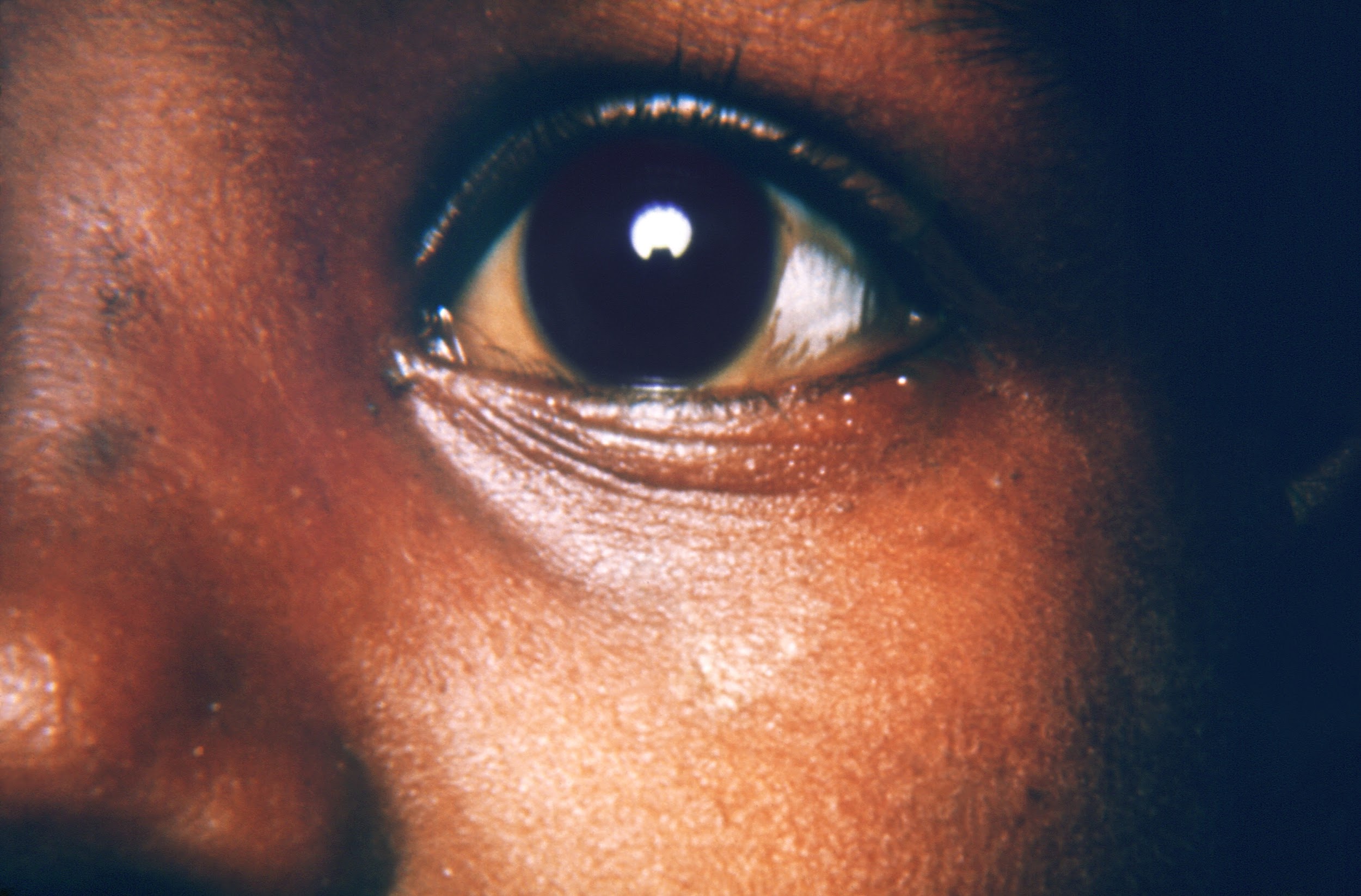 Figure 8.21. A child with xerophthalmia caused by vitamin A deficiency, demonstrating cloudiness on the surface of the eye.

A deficiency in vitamin A can thus impair vision in two ways:

1. Development of night blindness due to a lack of the pigment rhodopsin

Night blindness is usually the first sign of a vitamin A deficiency, followed by xerophthalmia and clouded vision. If the deficiency persists, the damage from keratin in the lining of the eye can cause permanent blindness.

Vitamin A’s role in cellular differentiation also makes it critical to cells around the body involved in normal growth, development, reproduction, and immune function. All of these processes require cells to develop in specific ways at specific times, and vitamin A helps to orchestrate these processes. For example, embryonic development requires stem cells to differentiate into specific types of cells to form new organs, and timing is critical.

Vitamin A also helps the immune system produce different types of immune cells, and without adequate vitamin A, a person is more susceptible to infections. The common occurrence of severe xerophthalmia in children who died from infectious diseases led scientists to hypothesize that supplementing vitamin A in the diets of children with xerophthalmia might reduce disease-related mortality. In Asia in the late 1980s, researchers administered vitamin A supplements to targeted populations of children, and their death rates from measles and diarrhea declined by up to 50%. Vitamin A supplementation in these deficient populations did not reduce the number of children who contracted these diseases, but it did decrease the severity of the diseases so that they were less likely to be fatal. Since this discovery, providing vitamin A supplementation to children in the developing world has been a major effort of the World Health Organization and UNICEF.1

Food Sources of Vitamin A and Carotenoids

is found only in animal-derived foods. The best food sources are liver and fish oils, as vitamin A is fat-soluble and stored in fatty tissues. Smaller amounts can be found in other animal products, such as meat, eggs, and dairy products.

A carotenoids such as beta-carotene are mostly found in fruits and vegetables. Carotenoids are brightly-colored pigments, so vibrant color is a good indicator of their presence. Top sources include orange and yellow vegetables such as carrots, sweet potatoes, and pumpkins (beta-carotene is a bright orange pigment), bell peppers, fruit, leafy green vegetables, and some vegetable oils. Some carotenoids can also be found in animal-derived foods. For example, the yellow color of egg yolk and butter comes from carotenoids absorbed from the diets of the hens and cows, respectively. 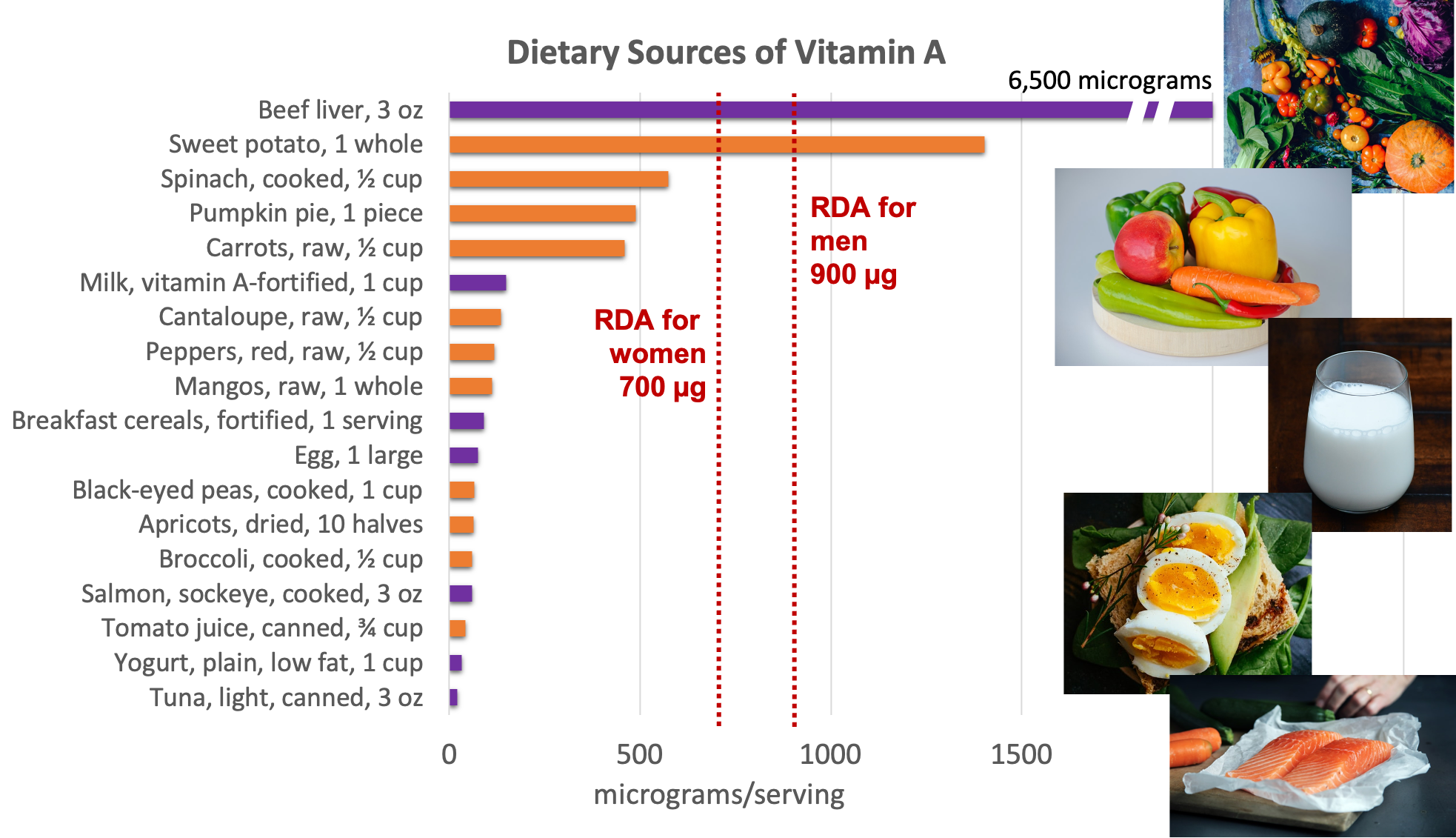 Deficiency and Toxicity of Vitamin A and Carotenoids

The main symptoms of vitamin A deficiency are xerophthalmia, night blindness, and increased susceptibility to infections. Another symptom is , which occurs when cells in the skin overproduce the protein keratin (similar to what happens in the eye with xerophthalmia) causing the skin to become rough and irritated.

Vitamin A deficiency is rare in developed countries, but globally, it is the leading cause of preventable blindness in children. It is caused by malnutrition related to consumption of inadequate diets predominantly based on staple grains and lacking in animal products, fruits, vegetables, and fat, which increases absorption of vitamin A. According to the World Health Organization, an estimated 250,000 to 500,000 children lose their sight each year due to vitamin A deficiency, and half of them die within a year of developing blindness, likely due to infection.2 According to UNICEF, 30% of children under 5 have vitamin A deficiency in the world, but rates are as high as 44% and 48% in south Asia and sub-Saharan Africa, respectively.4 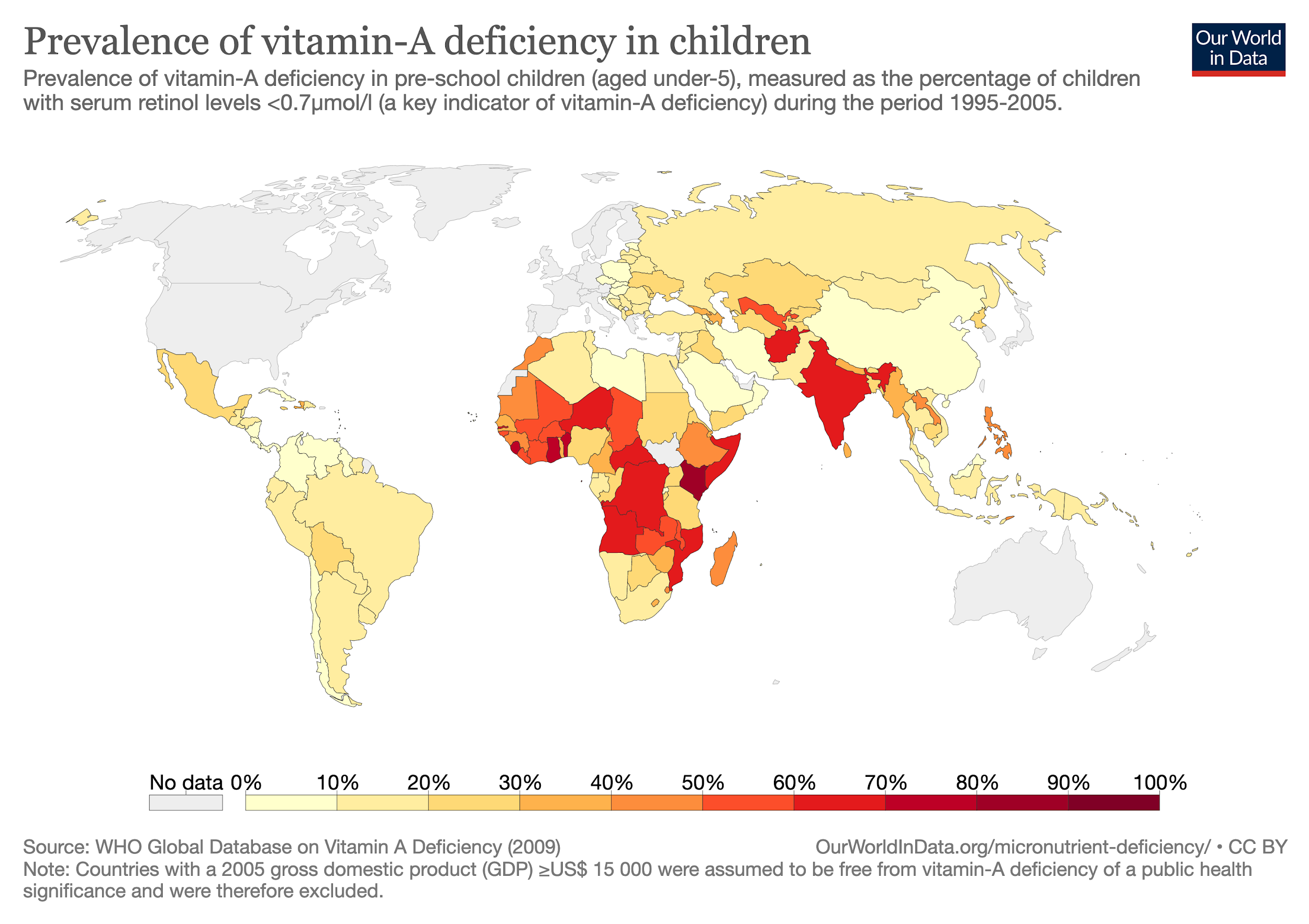 Figure 8.23. The worldwide prevalence of vitamin A deficiency in 1995-2005, based on World Health Organization data.

Vitamin A toxicity causes dry, itchy skin, loss of appetite, dizziness, nausea, swelling of the brain, and joint pain. In the most severe cases, it can cause liver damage, coma, and death. Vitamin A toxicity is almost always caused by taking supplements in doses above the UL of 3,000 micrograms per day for substantial periods. These high doses would not be found in a normal diet, although vitamin A toxicity has been observed in Arctic explorers who ate large amounts of bear and seal liver.4

Unlike preformed vitamin A, beta-carotene and other carotenoids do not seem to cause birth defects or other major toxicity effects in high doses. This is because the body doesn’t convert beta-carotene to vitamin A if it already has excessive amounts of vitamin A. Because it doesn’t cause toxicity, beta-carotene is usually used as the source of vitamin A in prenatal multivitamin supplements.

Beta-carotene that isn’t converted to vitamin A is absorbed intact in the intestine. When high levels of beta-carotene are consumed in the diet, it can have the unusual effect of making a person’s skin appear to be yellow or orange. The color change doesn’t seem to be harmful, and normal skin tone returns once the person stops consuming so much beta-carotene. However, studies have shown that long-term consumption of high-dose beta-carotene supplements have been linked to increased rates of cancer and death, so it’s best to get beta-carotene from food rather than supplements.

The form of vitamin A found in animal-derived foods.

Another term for retinol found in animal-derived foods.

Another term for retinol found in animal-derived foods.

A type of carotenoid; a precursor to active vitamin A.

A substance that can be converted into the active form of a vitamin (e.g., beta-carotene is a provitamin to active vitamin A).

A pigment in the eye that is especially important to vision in low-light conditions.

A condition that makes it difficult to see in low-light conditions.

The process by which cells change from stem cells to more specialized cells with specific structure and function.

A strong, fibrous protein; an important component of skin, hair, and nails.

Thickening of the outer layer of the skin due to overproduction of the protein keratin; can be a symptom of vitamin A deficiency.