The AMDR for protein for adults is between 10 and 35 percent of kilocalories.1 That’s a fairly wide range, and it encompasses typical protein intakes of many traditional human cultures.

Fig. 6.22. Diverse human cultures have survived on different levels of dietary protein. The photo on the left shows Inuit families sharing frozen, aged walrus meat. Their traditional diet is very dependent on meat and high in both protein and fat. On the right is a traditional vegetarian meal in India, high in carbohydrates but still providing adequate levels of protein.

Protein intake below the RDA is inadequate to support the body’s needs for synthesis of structural and functional proteins. On the other hand, there are some concerns that high protein intake is associated with chronic disease. However, as we’ll discuss, it’s not just the quantity of protein that matters, but also the nutritional package that it comes in.

Although severe protein deficiency is rare in the developed world, it is a leading cause of death in children in many poor, underdeveloped countries. There are two main syndromes associated with protein deficiencies: and .

Kwashiorkor affects millions of children worldwide. When it was first described in 1935, more than 90 percent of children with Kwashiorkor died. Although the associated mortality is slightly lower now, most children still die after the initiation of treatment.

The name Kwashiorkor comes from a language in Ghana and means, “rejected one.” The syndrome was named because it occurs most commonly in children recently weaned from breastfeeding, usually because the mother had a new baby, and the older child is switched to a diet of watery porridge made from low-protein grains. The child may be consuming enough calories, but not enough protein.

Kwashiorkor is characterized by swelling (edema) of the feet and abdomen, poor skin health, poor growth, low muscle mass, and liver malfunction. Recall that one of the roles of protein in the body is fluid balance. Diets extremely low in protein do not provide enough amino acids for the synthesis of the protein albumin. One of the functions of albumin is to hold water in the blood vessels, so having lower concentrations of blood albumin results in water moving out of the blood vessels and into tissues, causing swelling. The primary symptoms of Kwashiorkor include not only swelling, but also diarrhea, fatigue, peeling skin, and irritability. Severe protein deficiency in addition to other micronutrient deficiencies, such as folate, iodine, iron, and vitamin C all contribute to the many health manifestations of this syndrome.

Children and adults with marasmus are protein deficient, but at the same time, they’re also not taking in enough calories. Body weights of children with Marasmus may be up to 80 percent less than that of a healthy child of the same age. Marasmus is a Greek word meaning “starvation.” The syndrome affects more than fifty million children under age five worldwide. It is characterized by an extreme emaciated appearance, poor skin health, poor growth, and increased risk of infection. The symptoms are acute fatigue, hunger, and diarrhea. 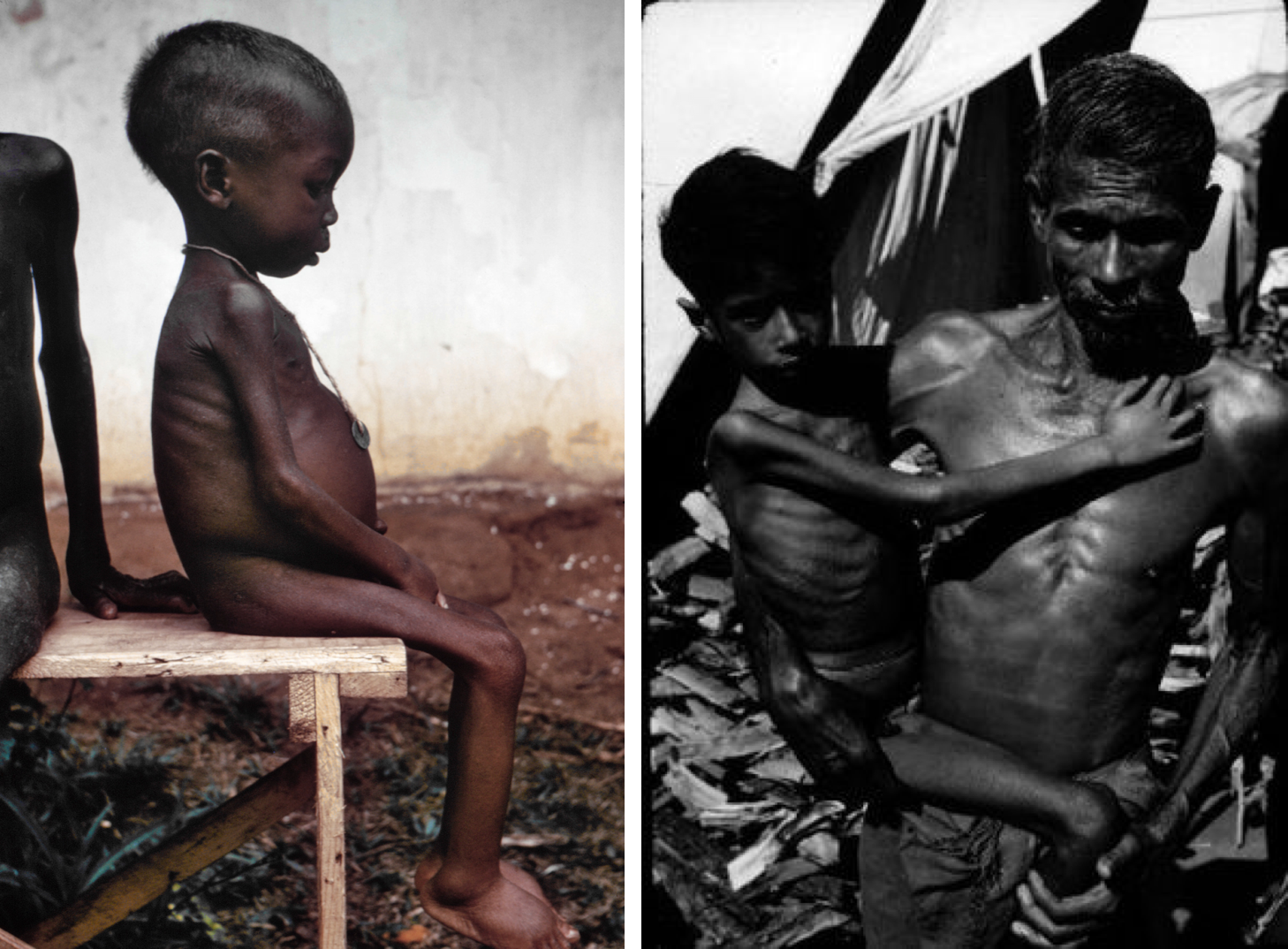 Kwashiorkor and marasmus often coexist as a combined syndrome termed marasmic kwashiorkor. Children with the combined syndrome have variable amounts of edema and the characterizations and symptoms of marasmus. Although organ system function is compromised by undernutrition, the ultimate cause of death is usually infection. Undernutrition is intricately linked with suppression of the immune system at multiple levels, so undernourished children commonly die from severe diarrhea and/or pneumonia resulting from bacterial or viral infection. According to the United Nations Children’s Fund (UNICEF), nearly half of all deaths of children under age five are related to malnutrition.3 That translates to about 3 million child deaths each year.

While severe protein deficiency is rare in the U.S., there are several groups at risk of low protein intake. A 2018 study found that 23 percent of U.S. adolescent girls (aged 14 to 18 years old) and 11 percent of adolescent boys were consuming below the RDA for protein, which may compromise their growth and development.2 This is thought to be related to the growing independence in food choices and the high prevalence of dieting in this group.

Low protein intake is also a concern for the elderly in the U.S. The same 2018 study found that among those 71 years and older, 19 percent of women and 13 percent of men consume less protein than the RDA.2 This is a particular concern in this age group, as loss of muscle is accelerated with aging, and that can lead to greater frailty, loss of balance, and greater risk of falls. Some researchers argue that older adults actually need more protein than recommended by the RDA in order to maintain muscle mass and function.4

Health Consequences of Too Much Protein in the Diet

When the Food and Nutrition Board of the Institute of Medicine wrote the DRI for macronutrients, published in 2005, they concluded that there wasn’t enough evidence to establish an Upper Limit for protein. The high end of the AMDR, 35 percent of kilocalories for protein, was set in order to allow the total diet to be well-balanced with carbohydrate and fat.1 Higher levels of protein intake haven’t been well-studied, but over the years, there have been many concerns with high protein diets. However, current evidence indicates it’s large amounts of animal protein (particularly from red meat or processed meats) that can be problematic, not high amounts of protein per se.5

For example, a diet containing lots of steak, bacon, and sausage would be high in protein, but it also might be high in saturated fat, cholesterol, salt, and nitrates. Eating more red meat and processed red meat is linked to an increased risk of heart disease, stroke, and cancer (especially colorectal, stomach, pancreatic, prostate, and breast cancers). This link doesn’t seem to be caused by the protein but rather the nutritional package that it comes in. In addition, the link to cancer may be related to the carcinogens that can form when meat is cooked at high temperatures, particularly when it’s charred by grilling.5

On the other hand, studies show that when protein comes from lean meat and plant sources, risk of chronic diseases may be reduced. For example, a 2015 study found that frequent consumption of red meat in adolescence was associated with a higher risk of breast cancer later in life, whereas consuming poultry, fish, legumes, and nuts instead lowered risk.6 Other studies have shown that higher protein diets can reduce the risk of heart disease, provided the protein comes from healthier sources.

Fig. 6.24. Compare several different “protein packages.” The steak and bacon provide protein but also large amounts of saturated fat and sodium. Salmon provides as much protein as the steak but with less saturated fat and more polyunsaturated fats. Lentils are a good source of protein, are low in fat, and are a great source of fiber.

Several other concerns about high protein diets haven’t turned out to be problematic after all:

From all of this research, there’s little evidence that a high protein diet is inherently harmful, so long as the protein doesn’t come packaged with a lot of saturated fat and red meat consumption is limited. Still, there’s little research directly testing the health effects of very high protein diets, including those achieved using protein supplements of purified protein, so it’s probably wise to keep protein balanced with the other macronutrients, focusing on whole foods from all the food groups.