Phosphorus is the second most abundant mineral in the human body, and 85% of the body’s phosphorus is housed in the skeleton. In addition, phosphorus (in the form of phosphate) is a component of the backbones of RNA and DNA, adenosine triphosphate (ATP), and phospholipids. Phosphate also plays important roles in regulating cell signaling, enzyme activity, and acid-base balance, as well as being part of creatine phosphate, which is an energy source for muscles during exercise.1

Because phosphorus is present with calcium in mineralized bone, it is somewhat regulated in parallel to calcium. PTH and activated vitamin D stimulate bone resorption, increasing not only blood levels of calcium, but also blood phosphate levels. However, in contrast to the effect of PTH on calcium reabsorption by the kidney, PTH stimulates the renal excretion of phosphate so that it does not accumulate to toxic levels.

In comparison to calcium, most people in the U.S. are not at risk for inadequate intake of phosphorus. Phosphorus is present in many foods, including meat, fish, dairy products, potatoes, nuts, beans, and whole grains. Phosphorus is also added to soft drinks and many processed foods, because it acts as an emulsifying agent, prevents clumping, improves texture and taste, and extends shelf life. 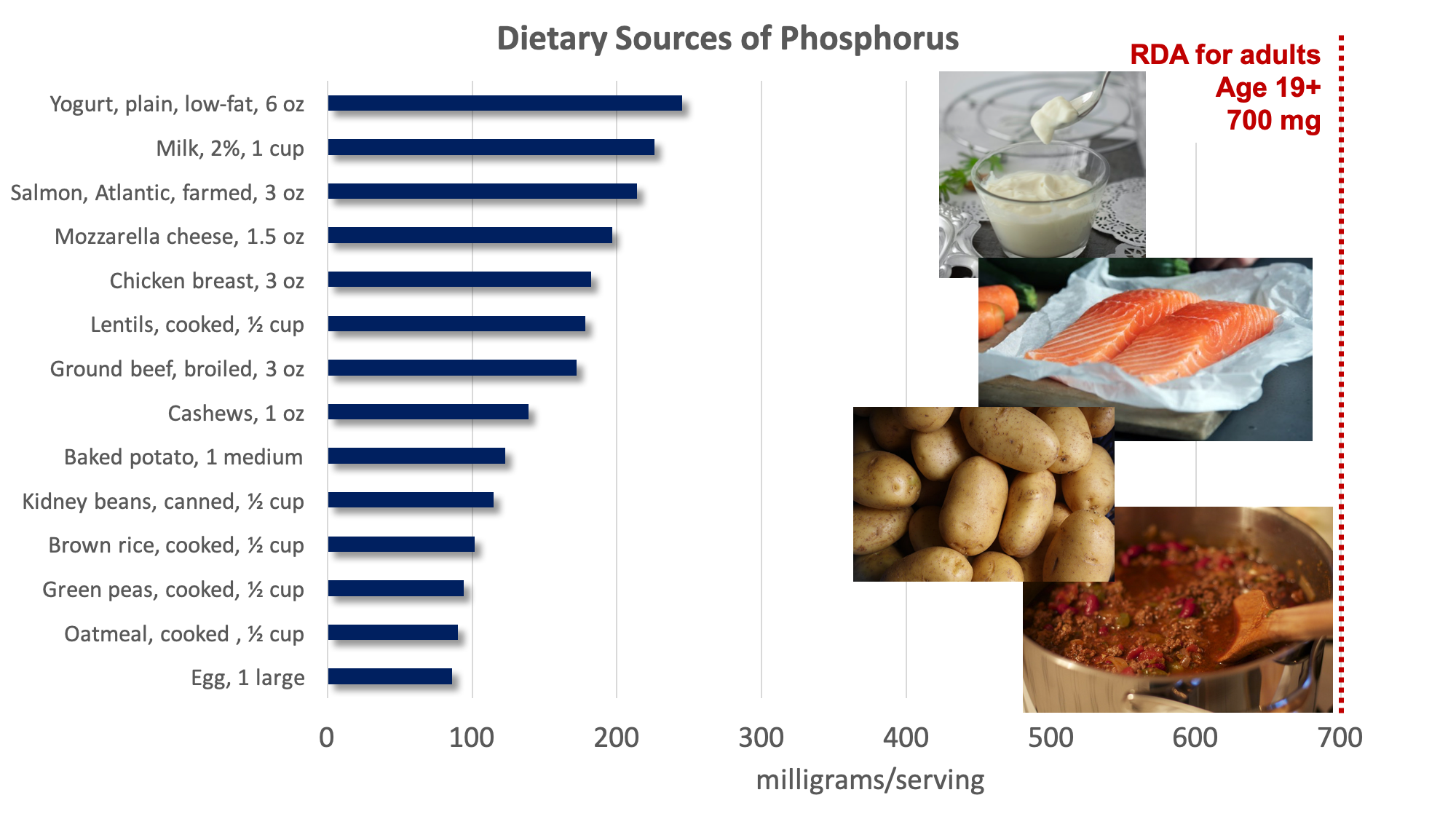 Approximately 60% of magnesium in the human body is stored in the skeleton, making up about 1% of mineralized bone tissue. In addition to contributing to bone maintenance, magnesium has several other functions in the body. It is required in every reaction involving ATP, amounting to more than three hundred enzymatic reactions. Magnesium plays a role in the synthesis of DNA and RNA, carbohydrates, and lipids, and it’s essential for nerve conduction, muscle contraction, and normal heart rhythm.

Magnesium is part of the green pigment, chlorophyll, which is vital for photosynthesis in plants; therefore green leafy vegetables are good dietary sources of magnesium. Magnesium is also found in high concentrations in nuts, whole grains, legumes, potatoes, dairy products, fish, and meats. Most foods that are high in fiber are good sources of magnesium, and it is added to some fortified foods, such as breakfast cereal. Additionally, chocolate, coffee, and hard water contain a good amount of magnesium. 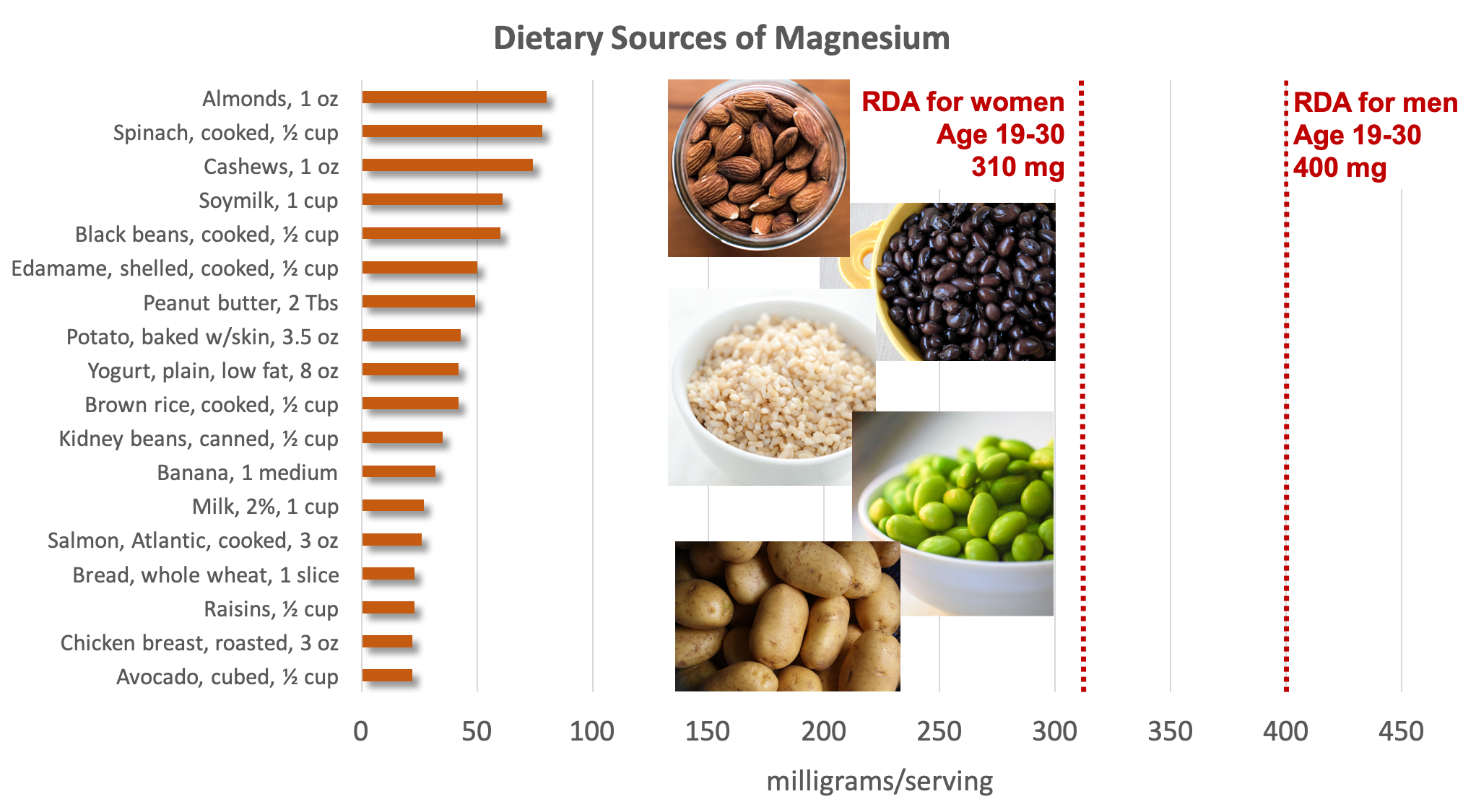 Most people in the U.S. do not meet the RDA for magnesium, and studies indicate that consuming adequate magnesium may improve health. For example, people with higher dietary intakes of magnesium tend to have lower rates of cardiovascular disease, type 2 diabetes, and osteoporosis, leading some researchers to hypothesize that low intake of magnesium may increase the risk of these chronic diseases. More studies are needed to determine whether magnesium supplements may help prevent these diseases. However, since magnesium is present in many healthful whole foods, improving magnesium intake through diet may bring multiple benefits.

Obvious magnesium deficiency due to low dietary intake is rare in healthy people, because the kidneys can decrease urinary excretion of this mineral when intake is inadequate. People at greater risk of magnesium deficiency include those with type 2 diabetes, gastrointestinal diseases like Crohn’s and celiac, chronic alcoholism, and older adults. A magnesium deficiency can cause decreased appetite, nausea, vomiting, fatigue, and weakness. If extreme, it can cause personality changes, muscle cramps, numbness, tingling, seizures, and an abnormal heart rhythm.3

Excessive intake of magnesium from foods is not a risk, as the kidneys can effectively excrete it if it’s in excess. However, people should take care not to consume more than the UL for magnesium from supplements and medications.3

Fluoride is a trace mineral needed in very small amounts in the body. It is known mostly as the mineral that combats tooth decay, but it also plays a role in assisting with tooth and bone development and maintenance. Because it isn’t necessary for growth or to sustain life, fluoride is generally not considered an essential mineral. However, fluoride’s role in preventing dental caries (i.e., tooth decay), the most prevalent chronic disease in children and adults, underscores the importance of this mineral in the human diet.4

As a natural mineral, fluoride is present in the soil and water in varying concentrations depending on geographical location. In the 1930s, researchers observed that children living in areas with naturally higher fluoride concentrations in their drinking water had a lower incidence of cavities, leading to the idea that adding fluoride to municipal water supplies could benefit public health. Fluoride was first added to drinking water in 1945 in Grand Rapids, Michigan; now over 60 percent of the U.S. population consumes drinking water that has been supplemented with fluoride to provide amounts that support dental health. The Centers for Disease Control and Prevention (CDC) has reported that fluoridation of water reduces cavities by 25 percent in children and adults and considers water fluoridation one of the ten great public health achievements in the twentieth century.5

Fluoride’s benefits to mineralized tissues of the teeth are well substantiated, but fluoride also plays an important role in the mineralization of bones, increasing their structural stability. Fluoride is currently being researched as a potential treatment for osteoporosis. The data are inconsistent on whether consuming fluoridated water reduces the incidence of osteoporosis and fracture risk. Fluoride does stimulate osteoblast bone building activity, and fluoride therapy in patients with osteoporosis has been shown to increase bone mineral density. In general, it appears that at low doses, fluoride treatment increases bone mineral density in people with osteoporosis and is more effective in increasing bone quality when the intakes of calcium and vitamin D are adequate. The Food and Drug Administration has not approved fluoride for the treatment of osteoporosis, mainly because its benefits are not sufficiently known. It also has several side effects, including frequent stomach upset and joint pain. The doses of fluoride used to treat osteoporosis are much greater than that in fluoridated water.

Fluoride is not widely found in the food supply. In communities with municipal water fluoridation, greater than 70 percent of fluoride intake comes from drinking water. In communities without fluoridated water, intake depends on how much fluoride occurs naturally in the water, but in most areas, natural levels fall below amounts recommended for cavity prevention. Other beverages with a high amount of fluoride include teas and grape juice. Solid foods do not generally contain a large amount of fluoride, although this depends on the fluoride level of the soil and water it was grown in and whether it was cooked with fluoridated water. Canned meats and fish that contain bones do contain some fluoride. Other good non-dietary sources are fluoridated toothpaste and dental rinses.

Figure 9.9. Dietary sources of fluoride include water, tea, shellfish, and fluoridated dental products such as toothpaste.

Since it is a nonessential mineral, there is no defined fluoride requirement, but lower levels are associated with higher rates of dental cavities in adults and children. This connection is why so many water supplies are fluoridated.

However, as with all minerals, fluoride can also be quite toxic if consumed in excessive amounts. Acute toxicity symptoms from large intakes of fluoride include nausea, vomiting, diarrhea, and convulsions. Chronic toxicity results in an irreversible condition known as , characterized by the mottling (i.e., white speckling) and pitting of the teeth (see Figure 9.10). Fluorosis is primarily a risk in children, because mineralization of permanent teeth has typically occurred by age 8.6

Because fluoridated oral care products often taste good, making them appealing to young children, it is important to make sure infants and children do not consume too much fluoride by swallowing toothpaste or other oral care products. Recommendations for managing fluoride intake in children include the following:7-9

A condition caused by excessive intake of fluoride; characterized by mottling (i.e., white speckling) and pitting of the teeth.