Vitamin D is unique among the vitamins because we can synthesize most of what we need in our skin. Sunlight is an essential ingredient in this process, so vitamin D is sometimes called the “sunshine vitamin.” However, the amount of vitamin D synthesized in the body is often not enough to meet our needs, so many people also need to consume dietary sources.

Metabolism and Functions of Vitamin D

In dietary sources, vitamin D may be present in the form of vitamin D3 from animal products or vitamin D2 (also called ), made by plants, mushrooms, and yeast. Dietary vitamin D2 and vitamin D3 are transported to the liver via chylomicrons and then taken up in chylomicron remnants.

Vitamins D2 and D3 are both inactive until they undergo two —chemical reactions that add a hydroxyl (-OH) group. The first hydroxylation occurs in the liver, creating . This is the circulating form of vitamin D and the form measured in blood to assess a person’s vitamin D status. The second hydroxylation occurs in the kidneys and forms , the biologically active form of vitamin D.

Recall from our discussion of regulation of blood calcium that one of the actions of parathyroid hormone (PTH) is to stimulate enzymes in the kidney that perform this last step in the activation of vitamin D. Active vitamin D increases the absorption of both calcium and phosphorus in the intestine, as well as working with PTH to reduce calcium loss in the urine and stimulate release of calcium and phosphorus from the bone. In these ways, vitamin D plays a critical role in both maintaining blood calcium homeostasis and enhancing the supply of calcium and phosphorus for bone mineralization. Vitamin D deficiency results in poor bone mineralization, with serious consequences in both children and adults, as we’ll discuss later on this page. 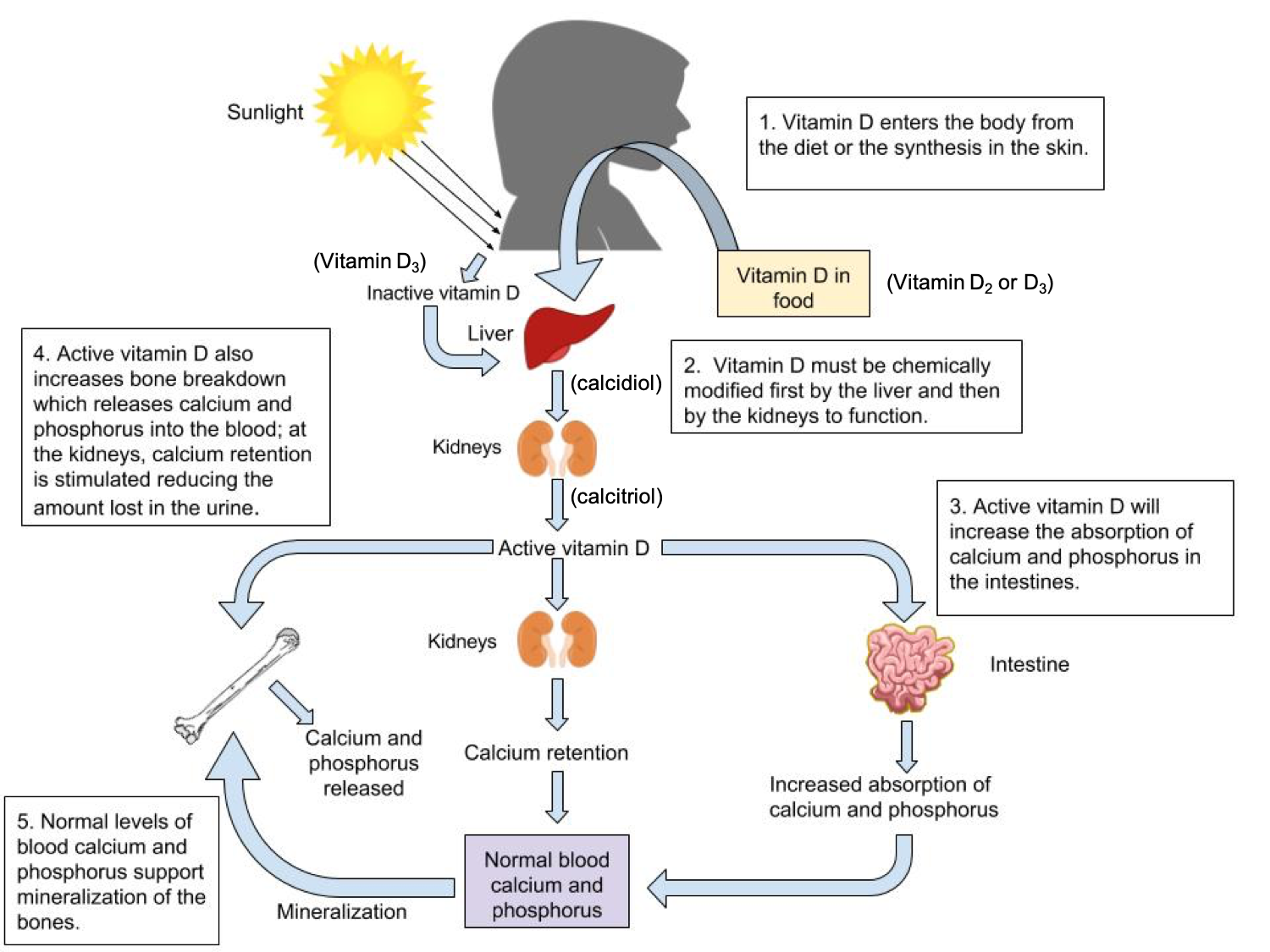 Figure 9.11. Vitamin D can be synthesized in the skin (vitamin D3) or provided in the diet (vitamin D2 or D3). It is converted by reactions occurring first in the liver (making calcidiol) and then kidney (making calcitriol, the active form). Once active, vitamin D works in several ways to ensure blood calcium homeostasis and enhance the availability of calcium for bone mineralization.

Beyond its role in bone health, vitamin D has many other functions in the body. Cells throughout the body have vitamin D receptors in their nuclei, and by binding to these receptors, vitamin D is thought to regulate the expression of hundreds of genes. Specifically, vitamin D is known to play important roles in regulating cellular differentiation and growth, immunity, insulin secretion, and blood pressure. Studies have found correlations between low circulating vitamin D levels and increased risks of chronic diseases, including cancer, diabetes, cardiovascular disease, and multiple sclerosis. However, it has been difficult to determine if a lack of vitamin D actually contributes to the cause of these diseases, and research in this area is ongoing.1

Sunlight as a Source of Vitamin D

In most people, vitamin D synthesis in the skin provides a significant portion of their body’s needs, and a little sun exposure can go a long way. Vitamin D researchers suggest that most people need between 5 and 30 minutes of sun exposure between 10 AM and 3 PM, at least twice per week, in order to synthesize adequate vitamin D. However, any factor that decreases exposure to UV rays can interfere with vitamin D synthesis, including the following:2

With so many factors affecting UV radiation exposure, many people are unable to synthesize enough vitamin D for at least part of the year. Because vitamin D is fat-soluble, liver and adipose storage can supply the body for a while. Beyond that, dietary sources and supplements may be needed to meet the vitamin D requirement.2

Only a few foods are naturally good sources of vitamin D. These include fatty fish such as salmon, tuna, and mackerel, as well as fish liver oil (e.g., cod liver oil). Smaller amounts are found in egg yolks, cheese, and beef liver. Additionally, some mushrooms grown in UV light can be a good source of vitamin D.

Most cow’s milk is fortified with vitamin D in the U.S. and Canada, but other dairy products such as ice cream and cheese are not. Fortified orange juice, soymilk and other plant-based beverages, and breakfast cereal can all contribute to dietary intake of vitamin D, although amounts added vary significantly between products.2 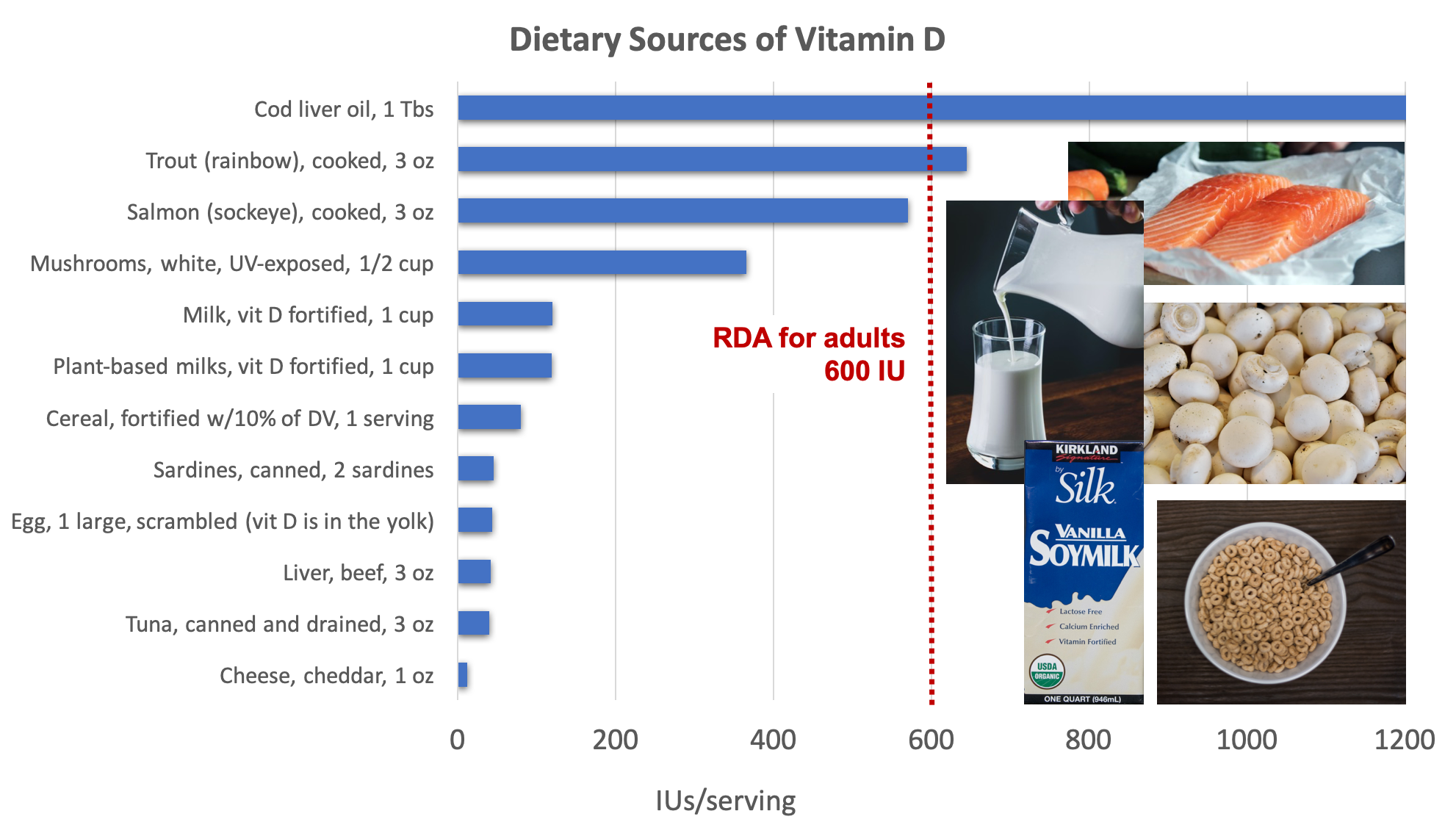 Both vitamin D2 and D3 supplements are also available. Some studies have found D3 to be more effective at raising circulating vitamin D levels, but others haven’t found a difference in efficacy of the two forms.1,2 Human breast milk doesn’t contain adequate vitamin D, so the American Academy of Pediatrics recommends that breastfed infants receive a supplement with 400 IU of vitamin D per day until they are weaned to vitamin D-fortified formula or cow’s milk. A vitamin D supplement may also be recommended for older children and adults, depending on dietary intake and sun exposure, but this should be discussed with a healthcare provider.

In children, vitamin D deficiency causes , a disease in which the bones are soft, weak, and deformed. Rickets was very common in the U.S. until the 1930s, when milk processors were asked to add vitamin D to cow’s milk. Milk fortification has virtually eliminated rickets from the U.S. and other developed countries. However, rickets does still occur in breastfed infants and children raised on vegan diets who aren’t provided with other sources of vitamin D, particularly if they have darker skin pigmentation.1,3 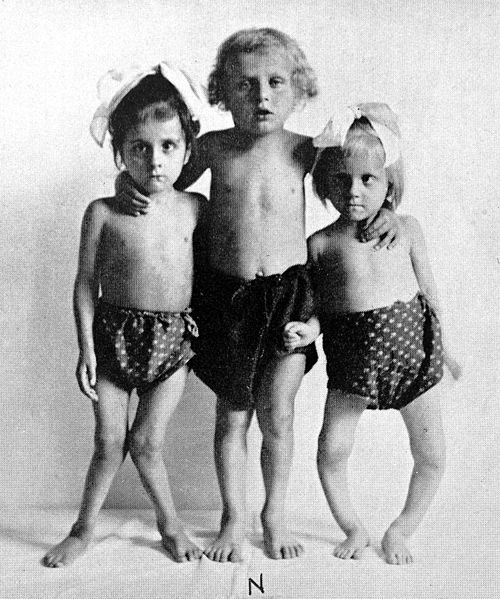 In adults, vitamin D deficiency causes , characterized by softening of bones, reduced bone mineral density, and increased risk of osteoporosis. Because bones are continuously remodelled throughout the lifespan, inadequate vitamin D limits the calcium available to continue to rebuild bone tissue. Vitamin D deficiency can also cause bone pain, as well as muscle weakness and pain, symptoms that can increase the risk of falling and fractures, particularly in older adults.2

Although vitamin D toxicity is rare, taking excessive amounts of vitamin D in supplement form can lead to , or high blood calcium. Hypercalcemia can cause kidney damage and calcium deposits to develop in soft tissues such as the kidneys, blood vessels, or other parts of the cardiovascular system. Synthesis of vitamin D from the sun does not cause vitamin D toxicity, because vitamin D synthesis is tightly regulated and decreases if the body has abundant vitamin D.

Also known as vitamin D3, this type of vitamin D is made by the skin when exposed to UV light and found in animal-derived foods.

Also known as vitamin D2, this type of vitamin D is made by plants, mushrooms, and yeast.

Chemical reactions that add a hydroxyl (-OH) group to a compound.

Activated vitamin D; increases the absorption of calcium in the intestine and works with PTH to release calcium from bone and reduce calcium loss in urine.

A disease caused by vitamin D deficiency in children and characterized by soft, weak, and deformed bones.

A disease caused by a vitamin D deficiency in adults and characterized by softening of bones, reduced bone mineral density, and increased risk of osteoporosis.