On the previous page, we learned that triglycerides—the main form of fat in the body and in food—are made up of a glycerol backbone with three fatty acids attached. As mentioned, fatty acids can differ from one another in both carbon chain length and degree of saturation. These characteristics influence the resulting fat in many ways.

Degrees of Saturation of Fatty Acids 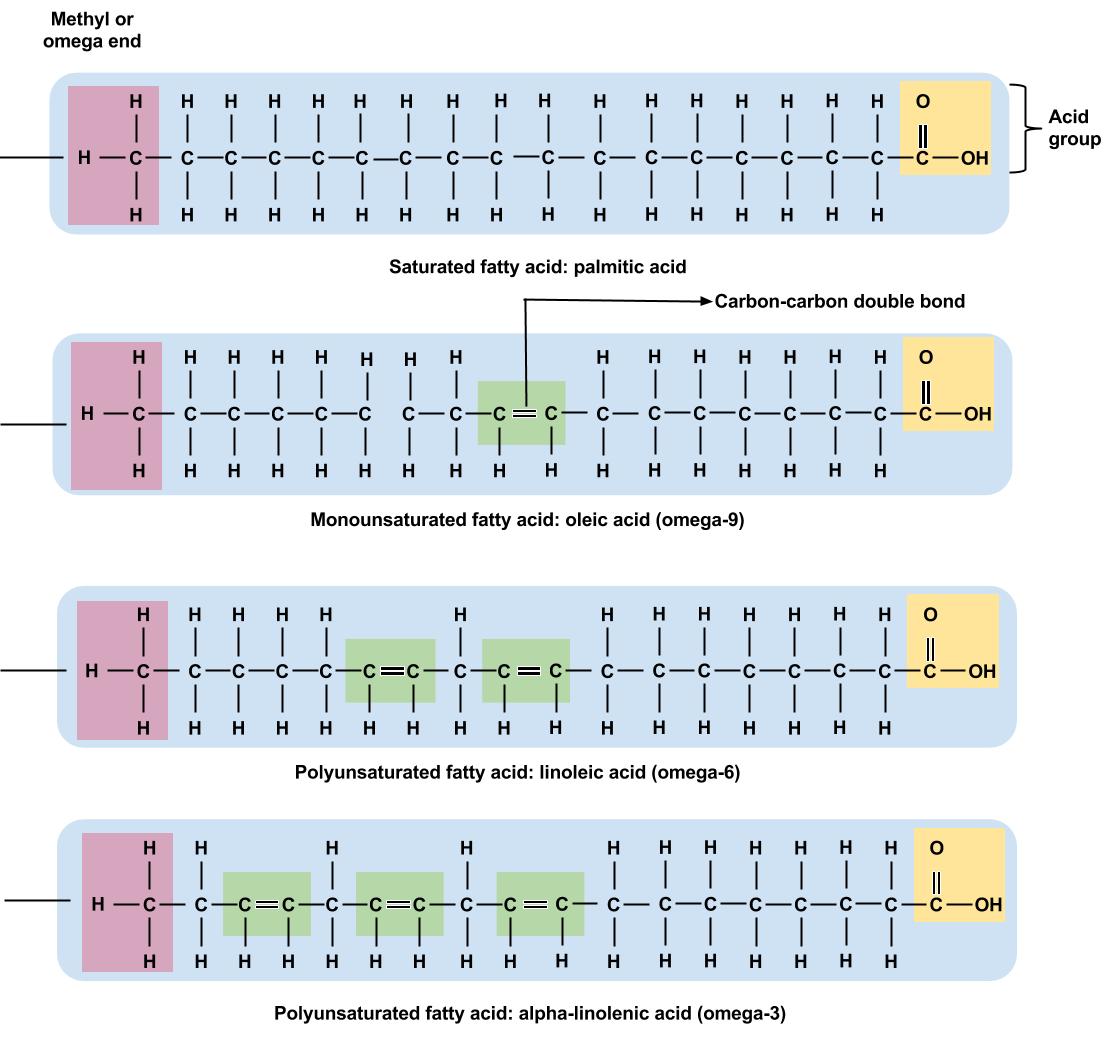 Figure 5.12. The structures of a saturated, monounsaturated, and polyunsaturated fat. Note the differences in points of unsaturation (C=C double bonds) on some of the fatty acids. 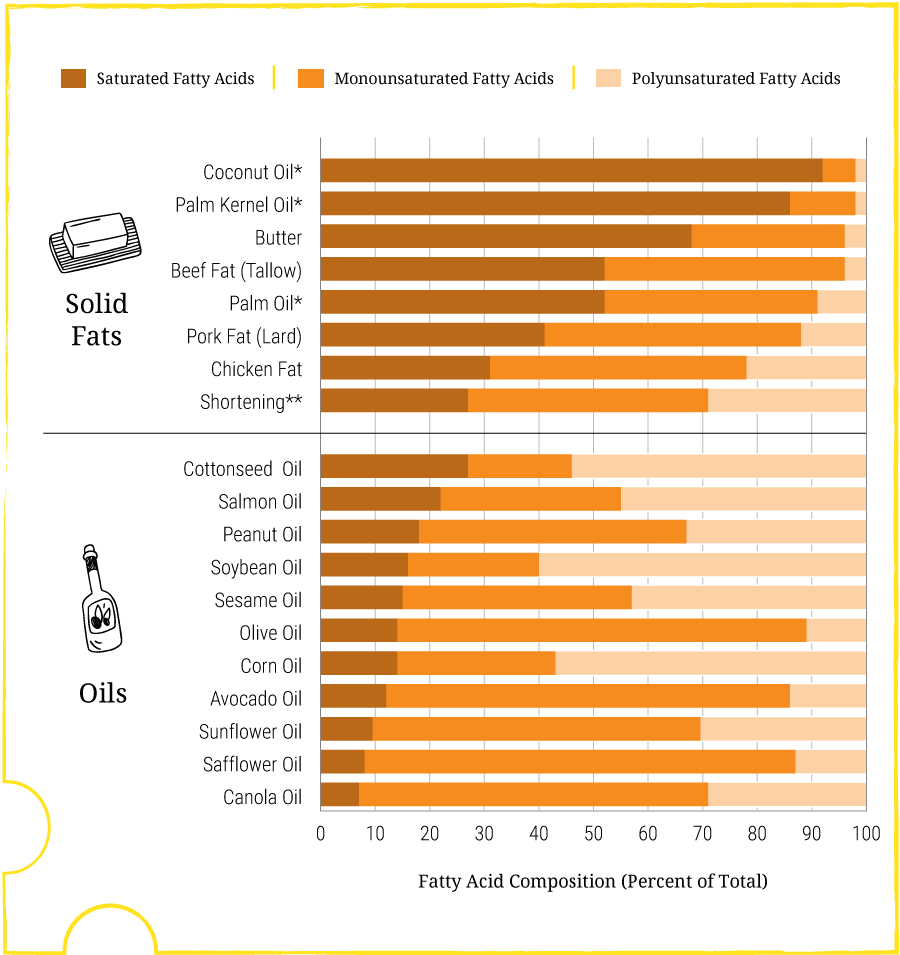 Figure 5.13. Dietary fats contain a mixture of saturated, monounsaturated, and polyunsaturated fatty acids. Foods are often categorized by the predominant type of fatty acids they contain, even though foods contain all three types.

Figure 5.14. Examples of foods high in saturated fat, such as meat and dairy products

Fat sources rich in unsaturated fatty acids tend to be liquid at room temperature, because the C=C double bonds create bends in the carbon chain, making it harder for fatty acids to pack together tightly. Consuming a diet rich in mono- and polyunsaturated fats is associated with a lower LDL cholesterol level and a lower risk of heart disease.

Food sources of predominately polyunsaturated fats include plant oils (soybean, corn); fish; flaxseed; and some nuts like walnuts and pecans.

Figure 5.16. Examples of foods high in polyunsaturated fats, like fish and nuts

Figure 5.17. The position of the first C=C double bond determines whether an unsaturated fatty acid is classified as omega-3 or omega-6. The two essential fatty acids, linoleic acid (an omega-6) and alpha-linolenic acid (an omega-3) are shown here.

Fatty acids are vital for the normal operation of all body systems, but the body is capable of synthesizing most of the fatty acids it needs. However, there are two fatty acids that the body cannot synthesize: (an omega-6) and (ALA, an omega-3). These are called because they must be consumed in the diet. Other fatty acids are called nonessential fatty acids, but that doesn’t mean they’re unimportant; the classification is based solely on the ability of the body to synthesize the fatty acid. Excellent food sources of linoleic fatty acid include plant oils such as corn oil and soybean oil, often found in salad dressings and margarine. Rich food sources of alpha-linolenic acid (ALA) include nuts, flaxseed, whole grains, legumes, and dark green leafy vegetables. 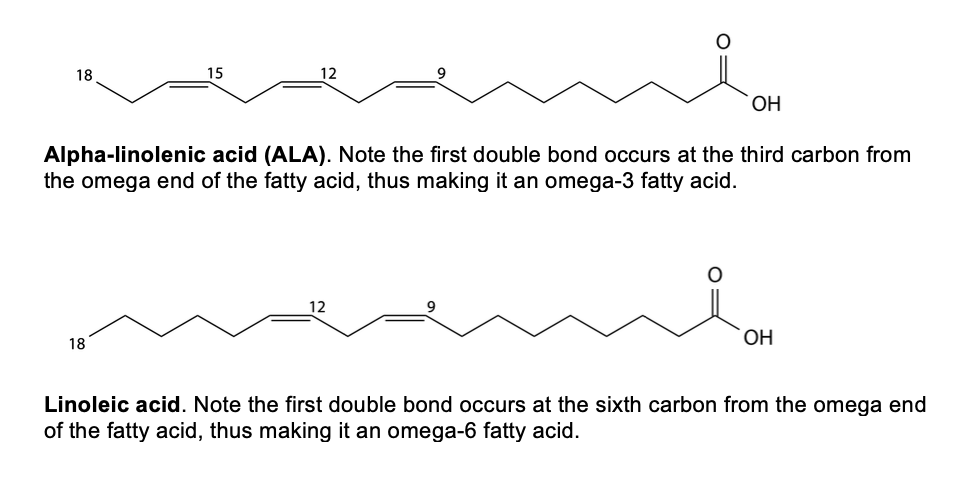 Figure 5.18. The chemical structure of the essential fatty acids shown in shorthand, without individual carbon and hydrogen atoms marked.

Most Americans easily consume enough linoleic acid and other omega-6 fatty acids, because corn and soybean oil are common ingredients in our food supply. However, sources of ALA and other omega-3 fatty acids are less common in the American diet, and many people could benefit from incorporating more sources of these into their diet. As an added benefit, whole foods rich in ALA come packaged with other healthful nutrients, like fiber, protein, vitamins, minerals, and phytochemicals.

A true essential fatty acid deficiency is rare in the developed world, but it can occur, usually in people who eat very low-fat diets or have impaired fat absorption. Symptoms include dry and scaly skin, poor wound healing, increased vulnerability to infections, and impaired growth in infants and children.1

Omega-3 and omega-6 fatty acids are precursors to a large family of important signaling molecules called (prostaglandins are one type of eicosanoid). Among the many functions of eicosanoids in the body, one of the most important is to regulate inflammation. Without these hormone-like molecules, the body would not be able to heal wounds or fight off infections each time a foreign germ presented itself. In addition to their role in the body’s immune and inflammatory processes, eicosanoids also help to regulate circulation, respiration, and muscle movement.

Two additional omega-3 fatty acids with important health benefits are and . These long-chain polyunsaturated fatty acids have been shown to help lower blood triglycerides and blood pressure, reduce inflammation, and prevent blood clot formation. They also promote normal growth and development in infants, especially in the development of the brain and eyes. Both of these important omega-3 fatty acids can be synthesized in the body from ALA, so they are not considered essential fatty acids. However, the rate of conversion of ALA to these omega-3s is limited, so it is beneficial to consume them regularly in the diet. Fish, shellfish, fish oils, seaweed, and algae are all good sources of EPA and DHA. DHA is also found in human breast milk in quantities dependent on the mother’s own intake of DHA sources. 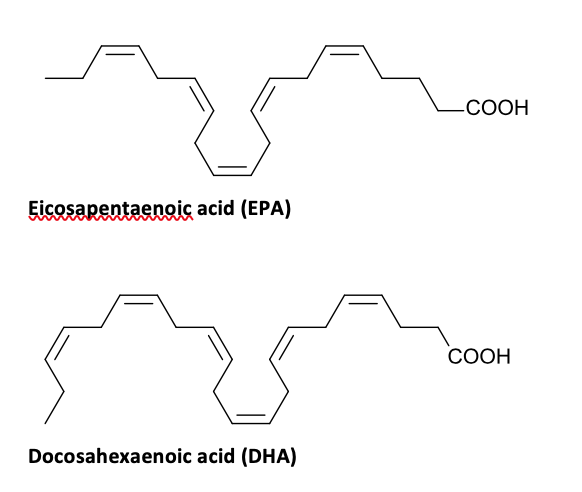 Figure 5.19. EPA and DHA are important but non-essential omega-3 fatty acids that can be made in the body from ALA.

Fish oil and omega-3 supplements are among the most commonly used dietary supplements in the United States. Researchers have hypothesized that these supplements might decrease risk of cardiovascular disease, be helpful for those with rheumatoid arthritis, and improve infant brain development when taken in pregnancy or in infancy. Some studies have found such benefits of the supplements, but others haven’t. One reason for these inconsistent results may be that studies often don’t measure participants’ baseline omega-3 levels and intake from foods, and those already consuming adequate omega-3s are less likely to benefit from a supplement. The Dietary Guidelines for Americans recommends consuming 8 ounces of a variety of seafood each week, and in general, people who meet this recommendation likely consume enough omega-3 fatty acids already (along with the other healthful nutrients found in fish) and are unlikely to see an added benefit of taking a fish oil supplement. Some doctors may recommend that people at risk of cardiovascular disease take a fish oil or omega-3 supplement, especially if they don’t eat fish regularly.2

A Word About Trans Fats

The carbon-carbon double bond in an unsaturated fatty acid chain can result in different shapes depending on whether the fatty acid is in a cis or trans configuration. When the hydrogen atoms are bonded to the same side of the carbon chain, it is called a cis fatty acid. Because the hydrogen atoms are on the same side (and repelling one another), the carbon chain has a bent structure. Naturally-occurring fatty acids usually have a cis configuration.

In a , the hydrogen atoms are bonded on opposite sides of the carbon chain, resulting in a more linear structure. Unlike cis fatty acids, most trans fatty acids are not found naturally in foods, but instead are a result of an industrial process called hydrogenation. is the process of adding hydrogen to the carbon-carbon double bonds, thus making the fatty acid saturated (or less unsaturated, in the case of partial hydrogenation). 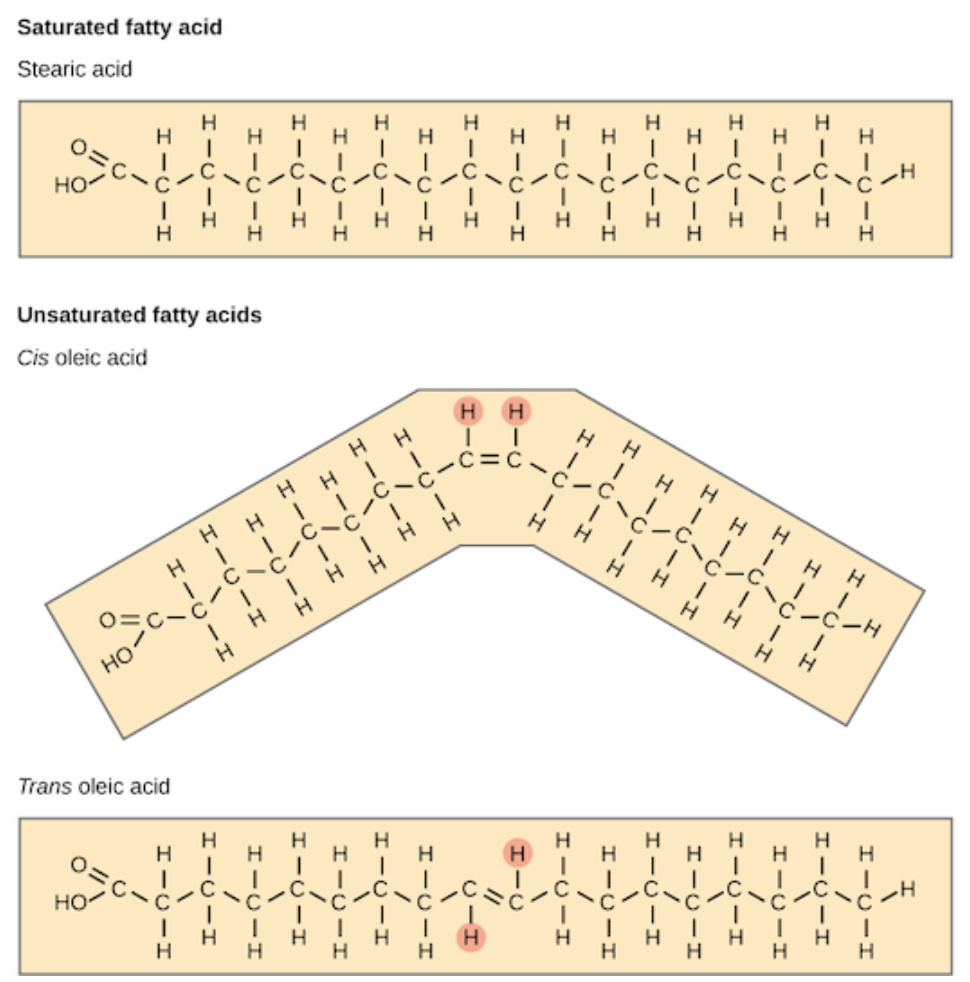 Hydrogenation was developed in order to make oils semi-solid at room temperature, enabling production of spreadable margarine and shortening from inexpensive ingredients like corn oil. Hydrogenation also makes oils more stable and less likely to go rancid, so partially hydrogenated oils were favored by fast food restaurants for frying, and manufacturers of processed baked goods like cookies and chips found they gave their products a longer shelf life. And because trans fats are unsaturated, nutrition scientists and the medical community believed that they were a healthier alternative to saturated fats.

But around the 1990s, evidence that trans fats were not healthy—far worse than saturated fats, in fact—began to accumulate. Like saturated fat, trans fats increase LDL (“bad”) cholesterol, but they also have the effect of decreasing HDL (“good”) cholesterol and of increasing inflammatory processes in the body. Researchers found that consuming trans fats, even at low levels (1 to 3 percent of total energy intake), was associated with an increased risk of coronary heart disease. They estimated that eliminating industrial trans fats from the food supply might prevent as many as 19 percent of heart attacks in the U.S. at the time, coming to 228,000 heart attacks averted.3

In 2006, the U.S. Food and Drug Administration (FDA) began requiring food companies to list trans fat information on the Nutrition Facts panel of food labels to keep consumers informed of their intake of these fats. That prompted the food industry to mostly eliminate partially hydrogenated oils from their products, often substituting palm oil and coconut oil in their place (both of which are high in saturated fat and may promote heart disease). In 2013, the FDA determined that trans fats were no longer considered safe in the food supply, and in 2015, the agency issued a ruling requiring that manufactured trans fats no longer be included in the U.S. food supply. A one-year extension was granted in 2018, and foods produced prior to that date were given time to work through the food supply. The final ruling requires all manufactured trans fats to be eliminated from the U.S. food supply by 2021.4

Fatty acids in which each carbon is bonded to two hydrogen atoms, with single bonds between the carbons.

Fatty acids that have one or more points of unsaturation, or double bonds, between the carbons.

A fatty acid with one double bond.

A fatty acid with two or more double bonds.

Fatty acids with the first double bond at the third carbon from the omega end.

Fatty acids with the first double bond at the sixth carbon from the omega end.

Fatty acids that can’t be synthesized in the body and must be consumed in the diet.

A large family of important signaling molecules, with roles such as regulating inflammation.

An important omega-3 fatty acid that can be synthesized in the body; it helps lower blood triglycerides and blood pressure, reduce inflammation, prevent blood clot formation, and promote normal growth and development in infants.

An important omega-3 fatty acid that can be synthesized in the body; helps lower blood triglycerides and blood pressure, reduce inflammation, prevent blood clot formation, and promote normal growth and development in infants.

A fatty acid where the hydrogen atoms are bonded on opposite sides of the carbon chain, resulting in a more linear structure.

The process of adding hydrogen to the carbon-carbon double bonds of a fatty acid, thus making it more saturated.