are macromolecules composed of amino acids. For this reason, are commonly called the building blocks of protein. There are 20 different amino acids, and we require all of them to make the many different proteins found throughout the body. Proteins are crucial for the nourishment, renewal, and continuance of life.

Just like carbohydrates and fats, proteins contain the elements carbon, hydrogen, and oxygen, but proteins are the only macronutrient that also contain nitrogen as part of their core structure. In each amino acid, the elements are arranged into a specific conformation, consisting of a central carbon bound to the following four components:

The first three of those components are the same for all amino acids. The side chain—represented by an “R” in the diagram below—is what makes each amino acid unique.

Amino acid side chains vary tremendously in their size and can be as simple as one hydrogen (as in glycine, shown in Figure 6.1) or as complex as multiple carbon rings (as in tryptophan). They also differ in their chemical properties, thus impacting the way amino acids act in their environment and with other molecules. Because of their side chains, some amino acids are polar, making them hydrophilic and water-soluble, whereas others are nonpolar, making them hydrophobic or water-repelling. Some amino acids carry a negative charge and are acidic, while others carry a positive charge and are basic. Some carry no charge. Some examples are given below. For this class, you don’t need to memorize amino acid structures or names, but you should appreciate the diversity of amino acids and understand that it is the side chain that makes each different. 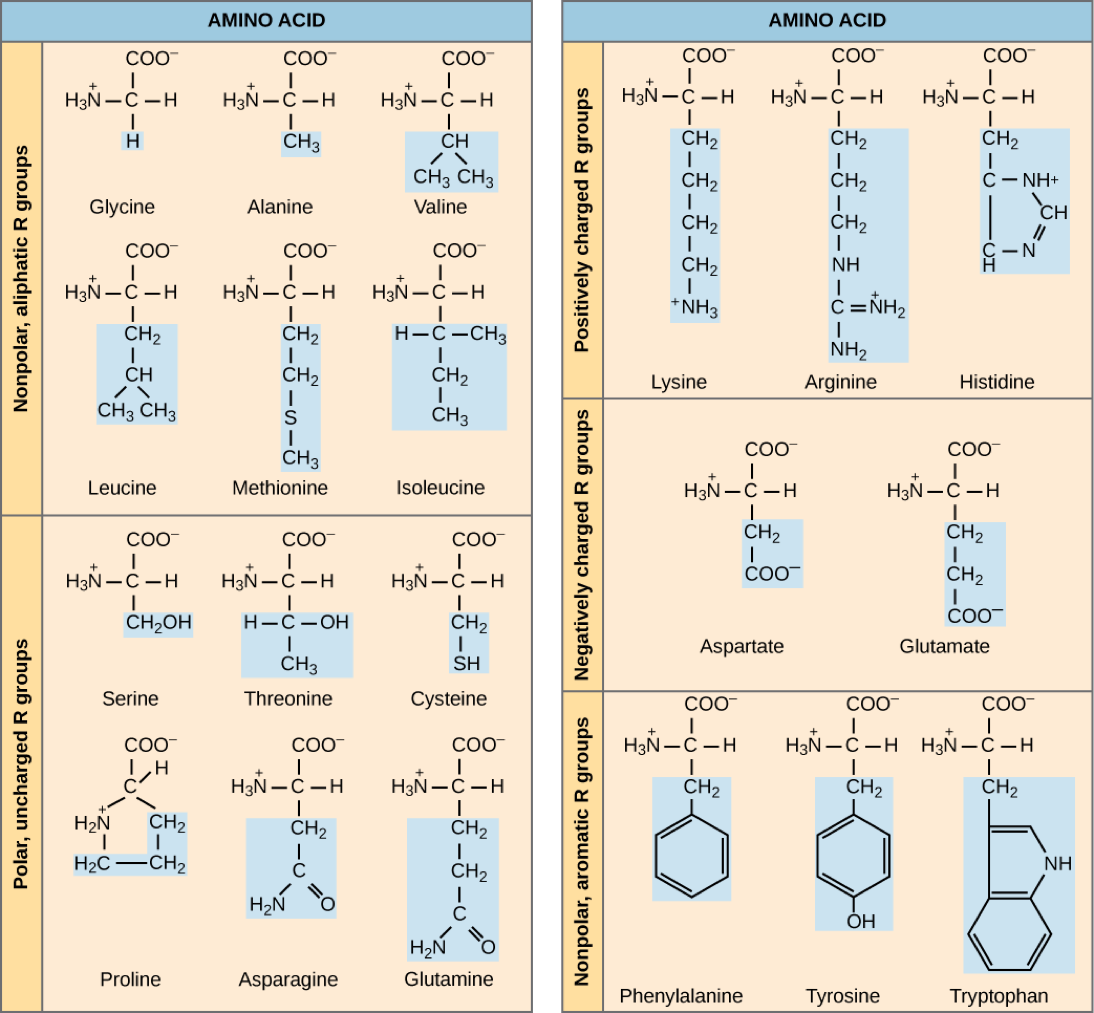 Figure 6.2. Amino acids have different structures and chemical properties, determined by their side chains.

We also classify amino acids based on their nutritional aspects (Table 6.1 “Essential and Nonessential Amino Acids”):

Sometimes during infancy, growth, and in diseased states, the body cannot synthesize enough of some of the nonessential amino acids and more of them are required in the diet. These types of amino acids are called .

The nutritional value of a protein is dependent on what amino acids it contains and in what quantities. As we’ll discuss later, a food that contains all of the essential amino acids in adequate amounts is called a , whereas one that does not is called an .

The Many Different Types of Proteins

The huge diversity of proteins is also due to the unending number of amino acid sequences that can be formed. To understand how so many different proteins can be made from only 20 amino acids, think about music. All of the music that exists in the world has been derived from a basic set of seven notes C, D, E, F, G, A, B (with the addition of sharps and flats), and there is a vast array of music all composed of specific sequences from these basic musical notes. Similarly, the 20 amino acids can be linked together in an extraordinary number of sequences. For example, if an amino acid sequence for a protein is 104 amino acids long, the possible combinations of amino acid sequences is equal to 20104, which is 2 followed by 135 zeros!

The decoding of genetic information to synthesize a protein is the central foundation of modern biology. The building of a protein consists of a complex series of chemical reactions that can be summarized into three basic steps: transcription, translation, and protein folding. 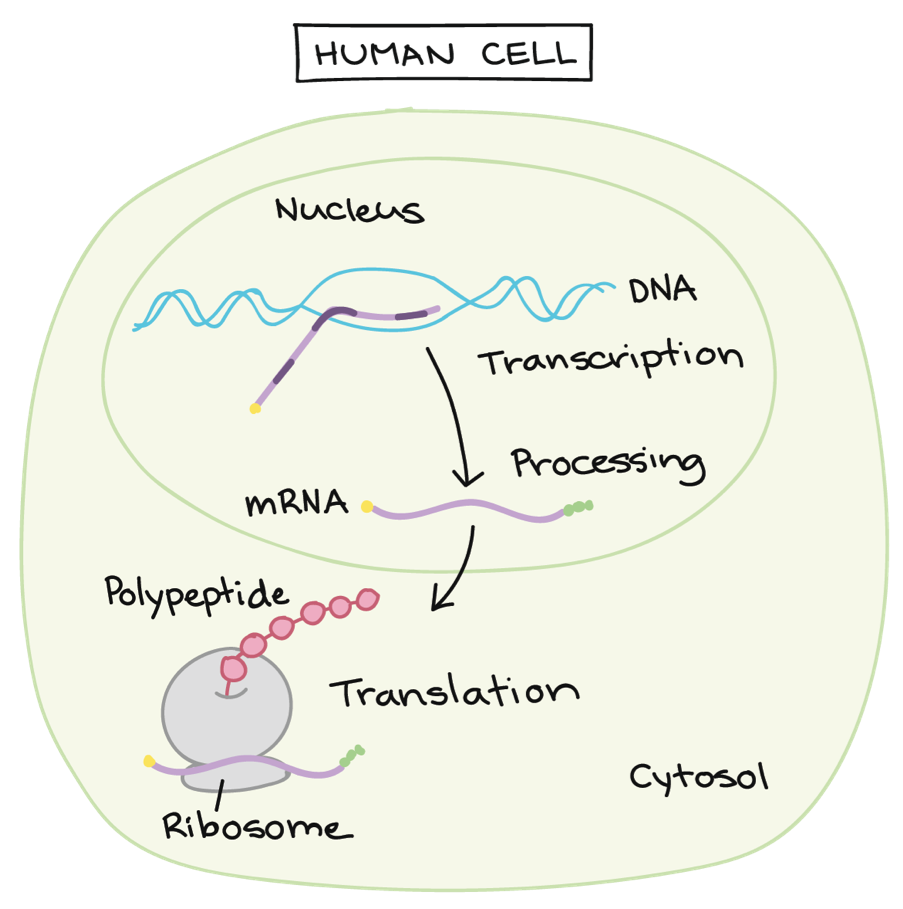 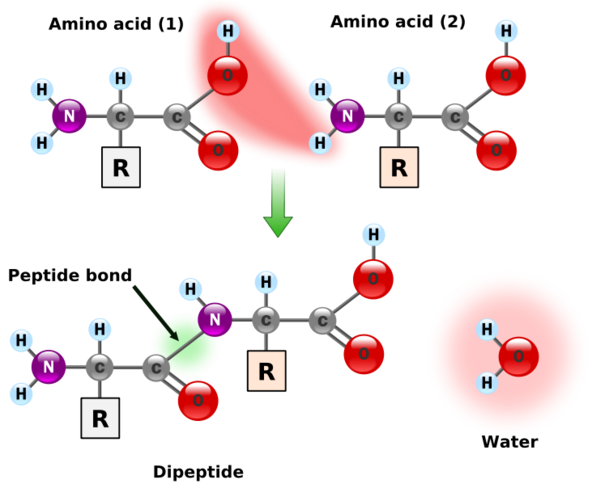 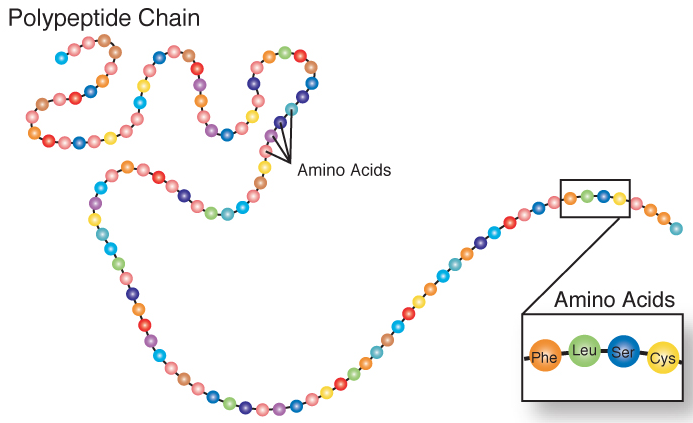 3. – The polypeptide chain folds into specific three-dimensional shapes, as described in the next section.

Protein’s structure enables it to perform a variety of functions. There are four different structural levels of proteins (Figure 6.6.):

VIDEO: “What is a Protein,” by RCSBProteinDataBank, YouTube (September 4, 2016), 2:38 minutes. This video gives an overview of the structure of amino acids, the four different structural levels of protein, and examples of different types of proteins in the body.

A protein’s structure also influences its nutritional quality. Large fibrous protein structures are more difficult to digest than smaller proteins and some, such as keratin, are indigestible. Because digestion of some fibrous proteins is incomplete, not all of the amino acids are absorbed and available for the body to utilize, thereby decreasing their nutritional value.

The specific three-dimensional structure of proteins can be disrupted by changes in their physical environment, causing them to unfold. This is called , and it results in loss of both structure and function of proteins. Changes in pH (acidic or basic conditions) and exposure to heavy metals, alcohol, and heat can all cause protein denaturation. The proteins in cooked foods are at least partially denatured from the heat of cooking, and denaturation in the stomach is an important part of protein digestion, as we’ll discuss later in this unit. We can see everyday examples of denaturation in cooking techniques, like how egg whites become solid and opaque with cooking, and cream becomes fluffy when it’s whipped. Both of these are examples of denaturation leading to physical changes in protein structure, and because protein structure determines function, denaturation also causes proteins to lose their function.

VIDEO: “Heat Changes Protein Structure,” by Sumanas (2006), 1:22 minutes. You can learn more about denaturation in this video animation.

An important concept with proteins is that SHAPE determines FUNCTION. A change in the amino acid sequence will cause a change in protein shape. Each protein in the human body differs in its amino acid sequence and consequently, its shape. The synthesized protein is structured to perform a particular function in a cell. A protein made with an incorrectly placed amino acid may not function properly, and this can sometimes cause disease. An example of this is sickle cell anemia, a genetic disorder. Below is a picture of hemoglobin, a protein with a globular three-dimensional structure. When packed in red blood cells to deliver oxygen, this structure gives red blood cells a donut shape. 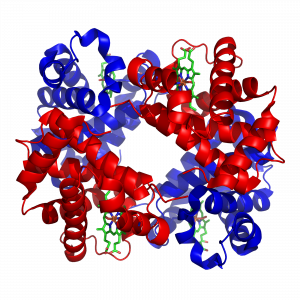 In people with sickle cell anemia, DNA gives cells the incorrect message when bonding amino acids together to make hemoglobin. The result is crescent-shaped red blood cells that are sticky and do not transport oxygen like normal red blood cells, as illustrated in the figure below. 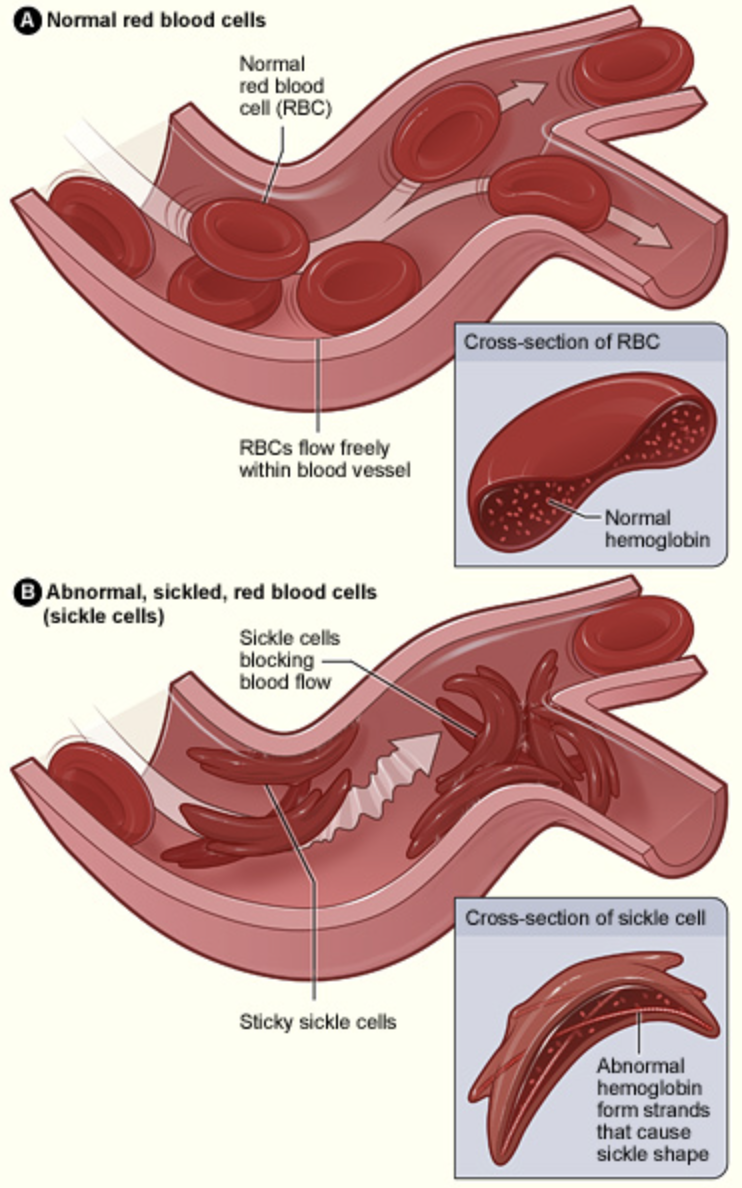 Macromolecules composed of chains of amino acids, which are simple subunits made of carbon, oxygen, hydrogen, and nitrogen.

The building blocks of protein.

Amino acids that are not required in the diet because the body can synthesize them.

Amino acids that must be obtained in the diet because they can’t be synthesized by the body in sufficient amounts.

Amino acids that must be obtained in the diet in certain situations when more are needed than the body can synthesize.

A food that contains all of the essential amino acids in adequate amounts needed by the body.

A food that does not contain all of the essential amino acids in adequate amounts needed by the body.

The first major step of protein synthesis; a process in which the genetic code of DNA is copied into messenger RNA.

The second major step of protein synthesis; information on messenger RNA is translated into building a protein.

Polypeptide chain that has folded into a three-dimensional organized shape based on the interactions of the amino acids.

When the three-dimensional structure of a protein is unfolded due to a change in the environment (e.g., acid, heat); results in loss of protein function.