Have you ever heard that taking vitamins will give you more energy? Or have you bought a product that claimed it could boost your energy level because it has added vitamins? Based on the knowledge that you’ve learned in this course, you know that vitamins are not broken down in the body to provide energy. So where does the idea that vitamins give you energy come from? On this page we will provide an overview of the B vitamins and several minerals that are important to the process of energy metabolism in the body, and take a closer look at two of those vitamins (folate and vitamin B12) that have some important implications in our health.

The Role of B Vitamins and Minerals in Energy Metabolism

All of the B vitamins and several minerals play a role in energy metabolism; they are required as functional parts of enzymes involved in energy release and storage. Many enzymes don’t work optimally, or even at all, unless bound to other specific helper molecules, called or . Binding to these molecules promotes optimal conformation and function for their respective enzymes. 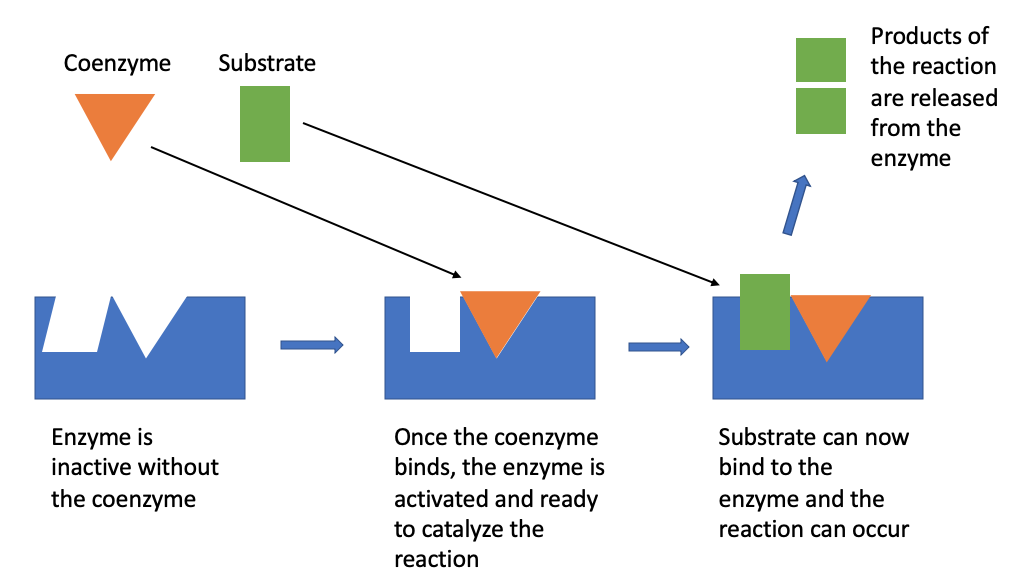 Figure 9.14. Role of a coenzyme assisting in an enzymatic reaction to break down a substrate.

Vitamins that bind to enzymes are referred to as —organic molecules which are required by enzymes to catalyze a specific reaction. They assist in converting a substrate to an end product. are the inorganic minerals that assist in these enzymatic reactions. Coenzymes and cofactors are essential in (i.e. breaking down substances) and play a role in many (i.e. building substances). Table 9.1 lists the vitamins and minerals that participate in energy metabolism and their key functions in that process.

*Normally used instead of common names

Table 9.1. Vitamins and minerals involved in energy metabolism and the role they each play.

Do B Vitamins Give You Energy?

Because B vitamins play so many important roles in energy metabolism, it is common to see marketing claims that B vitamins boost energy and performance. This is a myth that is not backed by science. The “feeling” of more energy from energy-boosting supplements stems more from the high amount of added sugars, caffeine, and other herbal stimulants that accompany the high doses of B vitamins in these products. As discussed, B vitamins are needed to support energy metabolism and growth, but taking in more than required does not supply you with more energy. A great analogy of this phenomenon is the gas in your car. Does it drive faster with a half-tank of gas or a full one? It does not matter; the car drives just as fast as long as it has gas. Similarly, depletion of B vitamins will cause problems in energy metabolism, but having more than is required to run metabolism does not speed it up. And because B vitamins are water-soluble, they are not stored in the body and any excess will be excreted from the body, essentially flushing out the added expense of the supplements.

The B vitamins important for energy metabolism are naturally present in numerous foods, and many other foods are enriched with them; therefore, B vitamin deficiencies are rare. Similarly, most of the minerals involved in energy metabolism and listed above are trace minerals that are not frequently deficient in the diet. However, when a deficiency of one of these vitamins or minerals does occur, symptoms can be seen throughout the body because of their relationship to energy metabolism, which happens in all cells of the body. A lack of these vitamins and minerals typically impairs blood health and the conversion of macronutrients into usable energy (i.e., ATP). Deficiency can also lead to an increase in susceptibility to infections, tiredness, lack of energy, and a decrease in concentration.1 Groups most at risk for a deficiency in any of these micronutrients are people on calorie-limited diets, people with imbalanced or insufficient nutrition, people with eating disorders, and people experiencing extensive levels of physical or emotional stress.1

Because of their water-solubility, toxicities of most of these nutrients are also uncommon, as excess intake is often excreted from the body. That doesn’t mean taking high doses comes without risks. Large quantities, particularly through supplements, can lead to adverse side effects or cause interactions with medications. For example, too much niacin can cause flushing of the skin or dangerous drops in blood pressure, and a high intake of B6 can lead to neuropathy. When taking vitamin or mineral supplements, always pay attention to the recommended dietary allowance and avoid exceeding the tolerable upper intake level (UL). 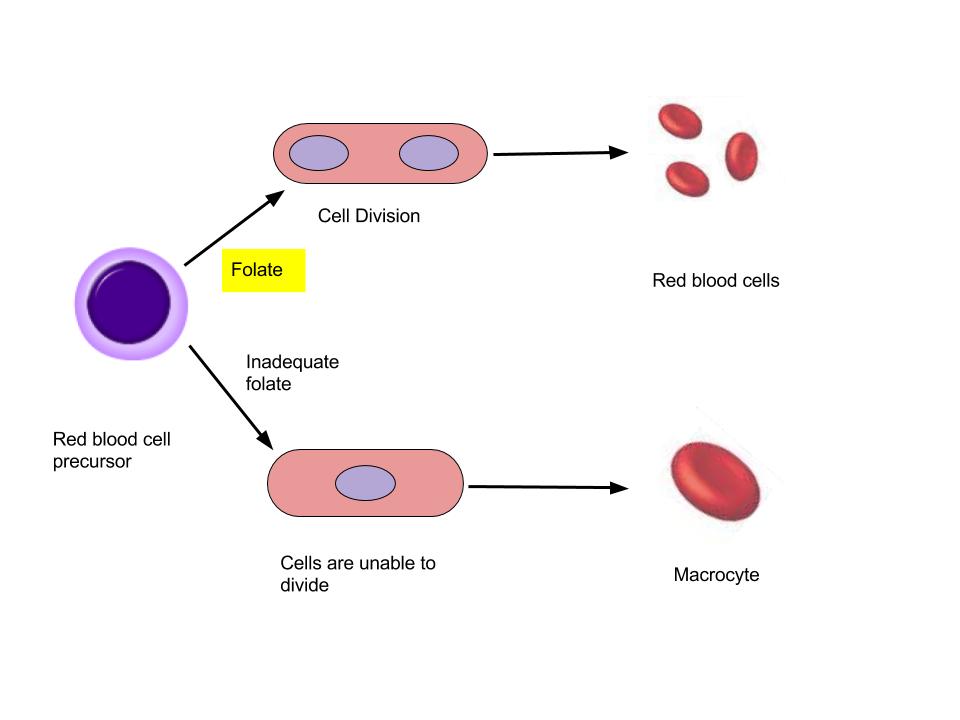 Figure 9.15. Folate and the formation of macrocytic anemia.

Folate is especially essential for the growth and specialization of cells of the central nervous system. Children whose mothers were folate-deficient during pregnancy have a higher risk of neural tube birth defects. Folate deficiency is causally linked to the development of , a neural tube defect that occurs in a developing fetus when the spine does not completely enclose the spinal cord. Spina bifida can lead to many physical and mental disabilities (Figure 9.16). In 1998, the U.S. Food and Drug Administration (FDA) began requiring manufacturers to fortify enriched breads, cereals, flours, and cornmeal with (a synthetic form of folate) to increase the consumption of folate in the American diet and reduce the risk of neural tube defects. Observational studies show that the prevalence of neural tube defects was decreased after the fortification of enriched cereal and grain products with folate compared to before these products were fortified.

Figure 9.16. Spina bifida (left) is a neural tube defect that can have serious health consequences. The prevalence of cases of spina bifida has decreased significantly with the fortification of cereal and grain products in the United States beginning in 1998.

Additionally, results of clinical trials have demonstrated that neural tube defects are significantly decreased in the offspring of mothers who began taking folic acid supplements one month prior to becoming pregnant and throughout pregnancy. In response to the scientific evidence, the Food and Nutrition Board of the Institute of Medicine (IOM) raised the RDA for folate to 600 micrograms per day for pregnant women. 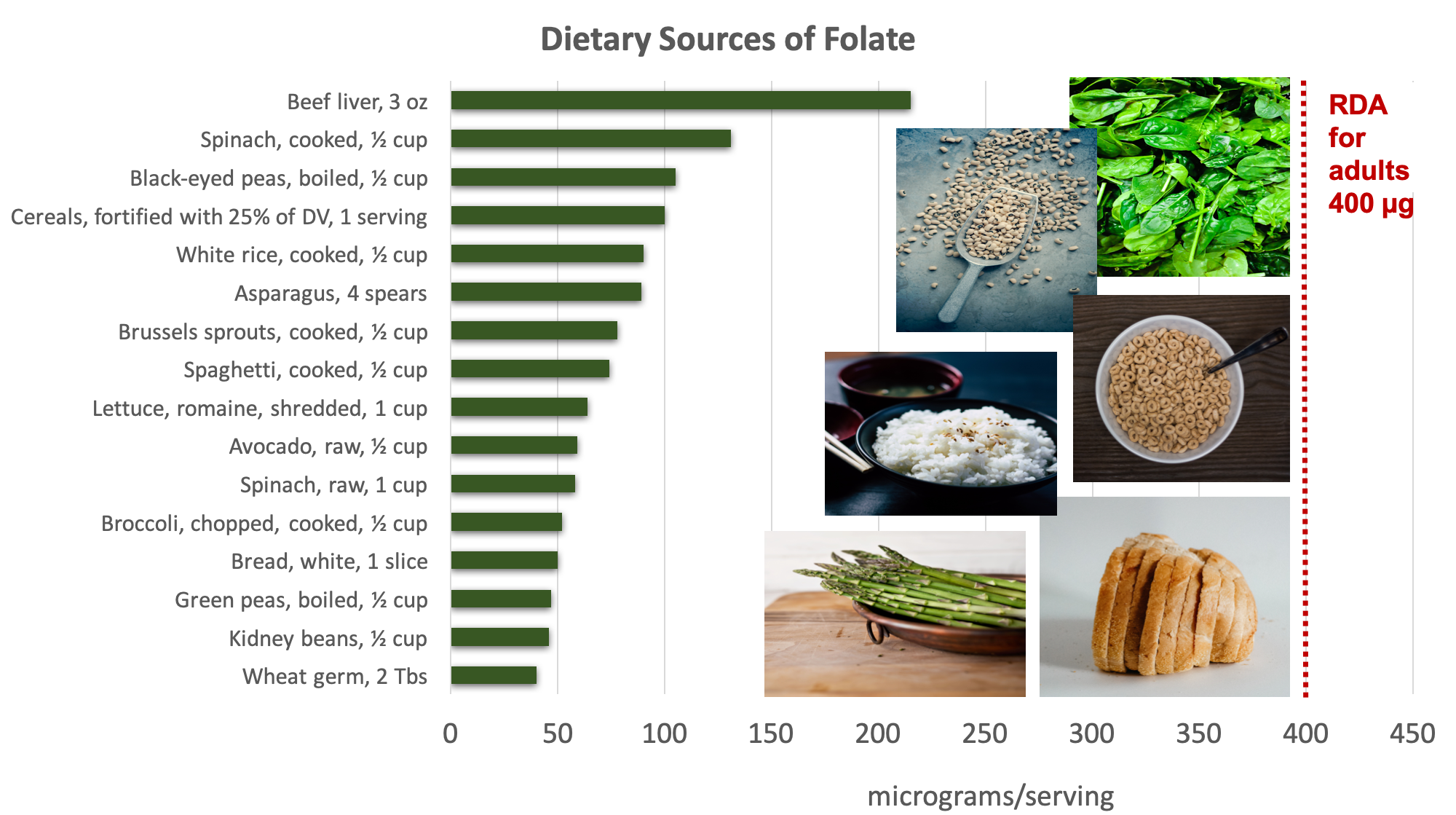 Folate deficiency is typically due to an inadequate dietary intake; however, smoking and heavy, chronic alcohol intake can also decrease absorption, leading to a folate deficiency.2 The primary sign of a folate deficiency is macrocytic anemia, characterized by large, abnormal red blood cells, which can lead to symptoms of fatigue, weakness, poor concentration, headache, irritability, and shortness of breath. Other symptoms of folate deficiency can include mouth sores, gastrointestinal distress, and changes in the skin, hair and nails. Women with insufficient folate intakes are at increased risk of giving birth to infants with neural tube defects and low intake during pregnancy has been associated with preterm delivery, low birth weight, and fetal growth retardation.3

Vitamin B12 helps to prevent the breakdown of the , a cover that surrounds and protects nerve cells. It is also an essential part of coenzymes. It is necessary for fat and protein catabolism, folate coenzyme function, and hemoglobin synthesis. An enzyme requiring vitamin B12 is needed by a folate-dependent enzyme to synthesize DNA. Thus, a deficiency in vitamin B12 has similar consequences to health as a folate deficiency. In children and adults, vitamin B12 deficiency causes macrocytic anemia, and in babies born to cobalamin-deficient mothers there is an increased risk for neural tube defects.

In order for the human body to absorb vitamin B12, the stomach, pancreas, and small intestine must be functioning properly. Cells in the stomach secrete a protein called that is necessary for vitamin B12 absorption, which occurs in the small intestine. Impairment of secretion of this protein either caused by an autoimmune disease or by chronic inflammation of the stomach (such as that occurring in some people with H.pylori infection), can lead to the disease , a type of macrocytic anemia. Vitamin B12 malabsorption is most common in older adults, who may have impaired functioning of digestive organs, a normal consequence of aging.

Dietary Sources of Vitamin B12

Vitamin B12 Deficiency and Toxicity

When there is a deficiency in vitamin B12, inactive folate (from food) is unable to be converted to active folate and used in the body for the synthesis of DNA. However, folic acid from supplements or fortified foods is available to be used as active folate in the body without vitamin B12. Therefore, if there is a deficiency in vitamin B12, macrocytic anemia may occur. Vitamin B12 deficiency also results in nerve degeneration and abnormalities that can often precede the development of anemia. These include a decline in mental function and burning, tingling, and numbness of legs. These symptoms can continue to worsen, and deficiency can be fatal.4

The most common cause of vitamin B12 deficiency is the condition of inadequate intrinsic factor production that leads to poor vitamin B12 absorption, resulting in pernicious anemia. This condition is common in people over the age of 50, because production of intrinsic factor decreases with age. Pernicious anemia is treated by large oral doses of vitamin B12 or by putting the vitamin under the tongue (sublingual), where it is absorbed into the bloodstream without passing through the intestine. In patients that do not respond to oral or sublingual treatment, vitamin B12 is given by injection.

No toxicity of vitamin B12 has been reported. Because of the low risk for toxicity, a tolerable upper intake level (UL) has not been established for vitamin B12.4

Organic molecules required by enzymes to catalyze a specific reaction.

The breakdown of complex molecules into simpler molecules to generate energy.

The synthesis of larger molecules, which requires energy.

A type of anemia characterized by larger and fewer red blood cells; caused by folate deficiency.

A neural tube defect that occurs in a developing fetus when the spine does not completely enclose the spinal cord; caused by folate deficiency.

A synthetic form of folate.

A cover that surrounds and protects nerve cells and allows electrical impulses to transmit quickly and efficiently.

A protein secreted in the stomach that is necessary for vitamin B12 absorption.

A type of macrocytic anemia caused by vitamin B12 malabsorption due to lack of intrinsic factor.

An amino acid found in blood.

A strict vegetarian who consumes no animal products.