In this section, we’ll discuss how to determine how much protein you need and your many choices in designing an optimal diet with high-quality protein sources.

How Much Dietary Protein Does a Person Need?

Because our bodies are so efficient at recycling amino acids, protein needs are not as high as carbohydrate and fat needs. The Recommended Dietary Allowance (RDA) for a sedentary adult is 0.8 g per kg body weight per day. This would mean that a 165-pound man and a 143-pound woman would need 60 g and 52 g of protein per day, respectively. The Acceptable Macronutrient Distribution Range (AMDR) for protein for adults is 10% to 35% of total energy intake. A Tolerable Upper Intake Limit for protein has not been set, but it is recommended that you not exceed the upper end of the AMDR.

Protein needs are higher for the following populations:

The Academy of Nutrition and Dietetics, Dietitians of Canada, and the American College of Sports Medicine recommend 1.2 to 2.0 grams of protein per kilogram of body weight per day for athletes, depending on the type of training.1 Higher intakes may be needed for short periods during intensified training or with reduced energy intake.

The appropriate amount of protein in a person’s diet is that which maintains a balance between what is taken in and what is used. The RDAs for protein were determined by assessing . Nitrogen is one of the four basic elements contained in all amino acids. When amino acids are broken down, nitrogen is released. Most nitrogen is excreted as urea in urine, but some urea is also contained in feces. Nitrogen is also lost in sweat and as hair and nails grow. The RDA, therefore, is the amount of protein a person should consume in their diet to balance the amount of protein used by the body, measured as the amount of nitrogen lost from the body. The Institute Of Medicine used data from multiple studies that determined nitrogen balance in people of different age groups to calculate the RDA for protein.

Figure 6.14. People are in nitrogen balance when they excrete as much nitrogen as they consume.

Figure 6.15. People are in negative nitrogen balance when they excrete more nitrogen than they consume, usually because they are not eating enough protein to meet their needs.

Figure 6.16. People are in positive nitrogen balance when they excrete less nitrogen than they consume, because they are using protein to actively build new tissue.

Although meat is the typical food that comes to mind when thinking of protein, many other foods are rich in protein as well, including dairy products, eggs, beans, whole grains, and nuts. Table 6.3 lists the grams of protein in a standard serving for a variety of animal and plant foods.

Notice in the table above that whole foods contain more protein than refined foods. When foods are refined—for example, going from a whole almond to almond milk or whole grain to refined grain—protein is lost in that processing. Very refined foods like oil and sugar contain no protein.

The USDA provides some tips for choosing your dietary protein sources. The overall suggestion is to eat a variety of protein-rich foods to benefit health. Examples include: 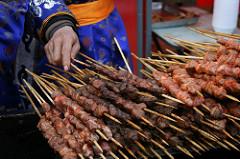 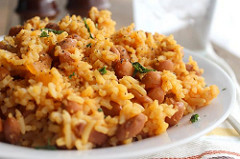 in a diet. When consumed in tandem, they contain all nine essential amino acids at adequate levels, so they are called . Some examples of complementary protein foods are given in Table 6.4. is another term used when combining two or more incomplete protein sources to make a complete protein. Complementary protein sources do not have to be consumed at the same time—as long as they are consumed within the same day, you will meet your protein needs. Most people eat complementary proteins without thinking about it, because they go well together. Think of a peanut butter sandwich and beans and rice; these are examples of complementary proteins. So long as you eat a variety of foods, you don’t need to worry much about incomplete protein foods. They may be called “lower quality” in terms of protein, but they’re still great choices, as long as they’re not the only foods you eat!

The second component of protein quality is digestibility, as not all protein sources are equally digested. In general, animal-based proteins are more fully digested than plant-based proteins, because some proteins are contained in the plant’s fibrous cell walls and these pass through the digestive tract unabsorbed by the body. Animal proteins tend to be 95 percent or more digestible; soy is estimated at 91 percent; and many grains are around 85 to 88 percent digestible.3

When the amount of excreted nitrogen is greater than that consumed, meaning that the body is breaking down protein to meet its demands.

When the amount of excreted nitrogen is less than what is consumed, such as during pregnancy or growth in childhood, times the body requires more protein to build new tissues.

A high-quality protein that contains all 9 essential amino acids; found in animal foods and soy and quinoa.

A lower quality protein that does not contain all 9 essential amino acids in proportions needed to support growth and health; found in plant foods.

The process of combining complementary proteins.