Blood is essential to life. It transports absorbed nutrients and oxygen to cells, removes metabolic waste products for excretion, and carries molecules, such as hormones, to allow for communication between organs.

Blood is a connective tissue of the circulatory system, made up of four components forming a matrix:

Maintaining healthy blood, including its continuous renewal, is essential to support its vital functions. Blood health is acutely sensitive to deficiencies in some vitamins and minerals, especially iron and vitamin K.

Iron is a trace mineral. It is a necessary component of many proteins in the body responsible for functions such as the transport of oxygen, energy metabolism, immune function, and antioxidant defense. Iron is also important in brain development and function.

Iron is essential for oxygen transport because of its role in , a protein in red blood cells that transports oxygen to cells and gives red blood cells their color. Hemoglobin is composed of four globular peptides, each with an iron-containing heme complex in the center (Figure 9.19). 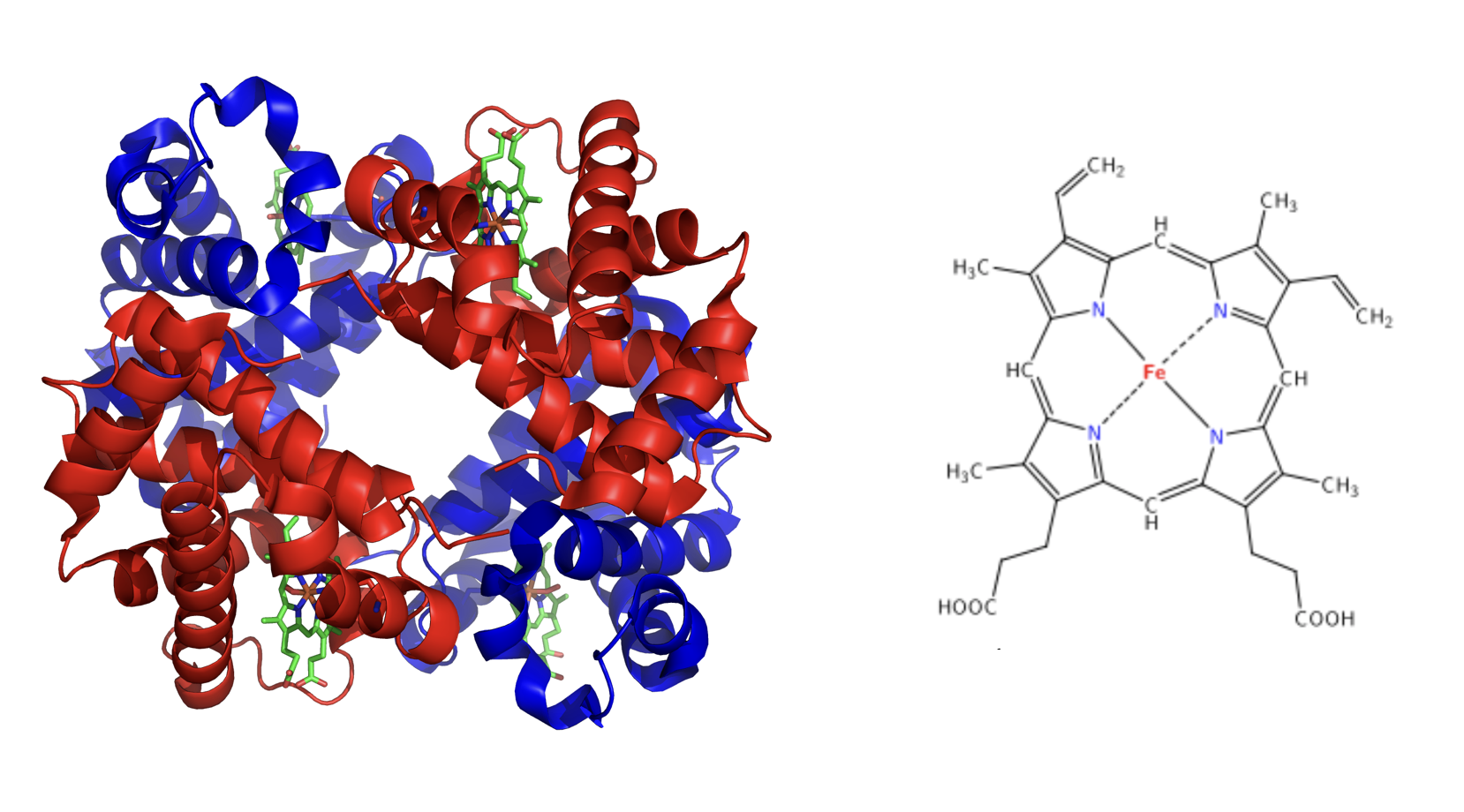 The iron in hemoglobin is what binds to oxygen, allowing for transportation to cells. If iron levels are low, hemoglobin is not synthesized in sufficient amounts, and the oxygen-carrying capacity of red blood cells is reduced, resulting in . Iron is also an important part of , a protein similar to hemoglobin but found in muscles.

There are two types of iron found in foods: and . 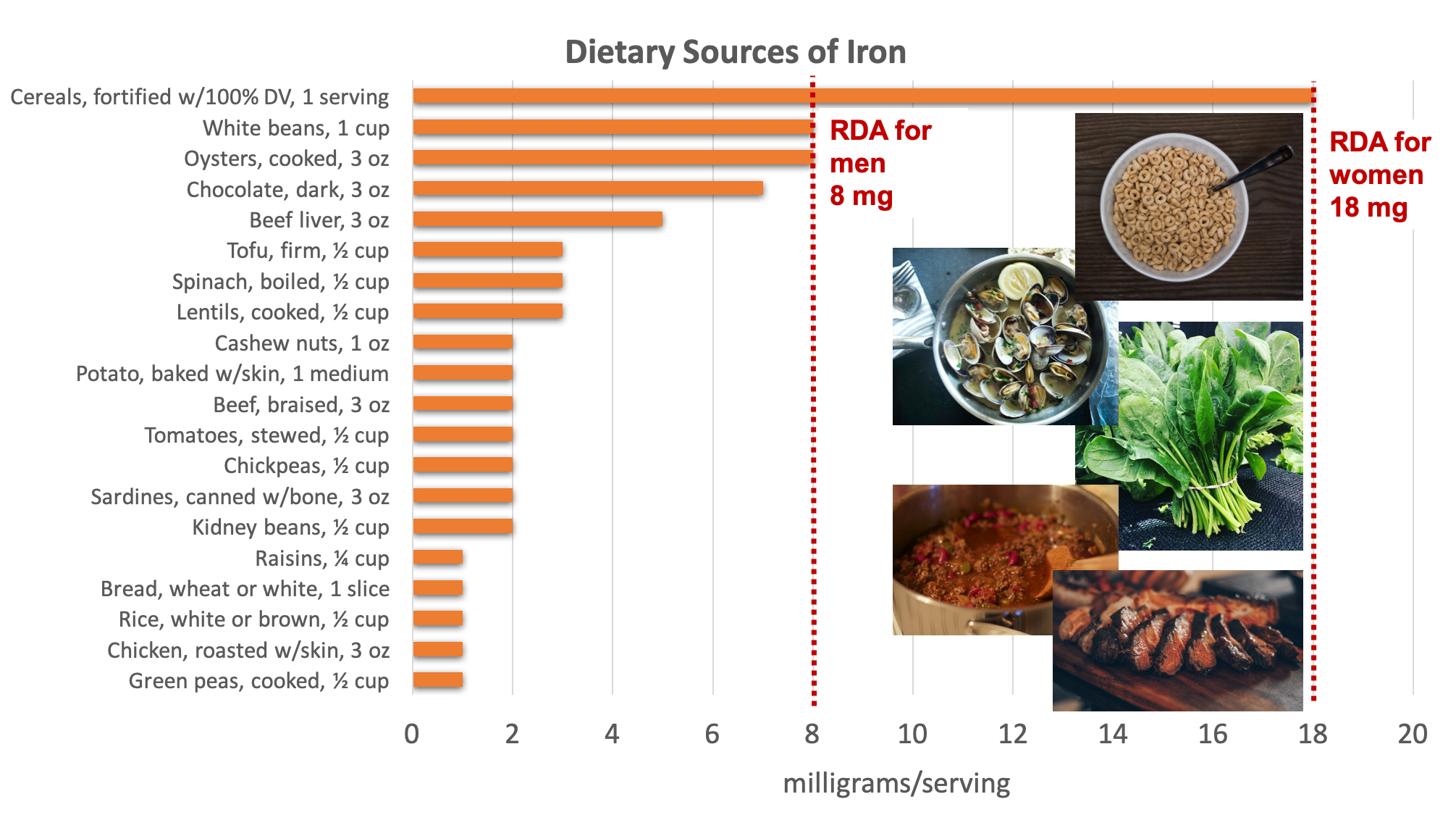 The bioavailability of iron is approximately 14% to 18% from mixed diets and 5% to 12% from vegetarian diets.2 Bioavailability is influenced by the dietary factors previously mentioned, as well as iron status. The body has no physiological mechanism to excrete iron; therefore, iron balance is tightly regulated by absorption.2 When iron stores are low, more dietary iron will be absorbed.

Iron deficiency is one of the most common nutrient deficiencies, affecting more than a third of the world’s population.3 is a condition that develops from having insufficient iron levels in the body, resulting in fewer and smaller red blood cells that contain less hemoglobin. As a result, blood carries less oxygen from the lungs to cells. Iron-deficiency anemia has the following signs and symptoms, which are linked to the essential functions of iron in energy metabolism and blood health:

Infants, children, adolescents, and women are the populations most at risk worldwide for iron-deficiency anemia.4 Infants who are premature, low birthweight, or have a mother with iron deficiency are at risk for iron deficiency, because they are born with low iron stores relative to the amount needed for growth and development. Young children and adolescent girls are at risk for iron deficiency due to rapid growth, low dietary intake of iron, as well as heavy menstruation for adolescent girls. In these populations, iron-deficiency anemia can also cause the following signs and symptoms: (an intense craving for and ingestion of non-food items such as paper, dirt, or clay), poor growth, failure to thrive, and poor performance in school, as well as mental, motor, and behavioral disorders. Women who experience heavy menstrual bleeding, or who are pregnant, are also at risk for iron inadequacy due to their increased requirements for iron.

To give you a better understanding of these risks, it is helpful to look at how much higher the RDA is for women of reproductive age and pregnant women compared to men (Table 9.2).1 To put this in perspective, 3 ounces of beef contains about 3 milligrams of iron, making it challenging for some women to meet their daily iron requirement.

Table 9.2. A comparison of the RDAs for adult women of reproductive age, pregnancy, and adult men.

Additionally, those who frequently donate blood, as well as people with cancer, heart failure, or gastrointestinal diseases such as Crohn’s, are at greater risk for iron inadequacy.1

Healthy adults are at little risk of iron overload from foods, but too much iron from supplements can result in gastric upset, constipation, nausea, vomiting, and abdominal pain.1 The body excretes little iron; therefore, the potential for toxicity from supplements is a concern. In children, death has occurred from ingesting as little as 200 mg of iron, so it is critical to keep iron supplements out of children’s reach. The tolerable upper intake for iron is 45 mg per day for adults, based on the amount that causes gastrointestinal distress.1

Vitamin K refers to a group of fat-soluble vitamins that are similar in chemical structure. They act as coenzymes and have long been known to play an essential role in blood or clotting. Vitamin K is also required for maintaining bone health, as it modifies a protein which is involved in the bone remodeling process.

Vitamin K is found in the highest concentrations in green vegetables such as collard and turnip greens, kale, broccoli, and spinach. Soybean and canola oil are also common sources of vitamin K in the U.S. diet.5 Additionally, vitamin K can be synthesized by bacteria in the large intestine, but the bioavailability of bacterial vitamin K is unclear. 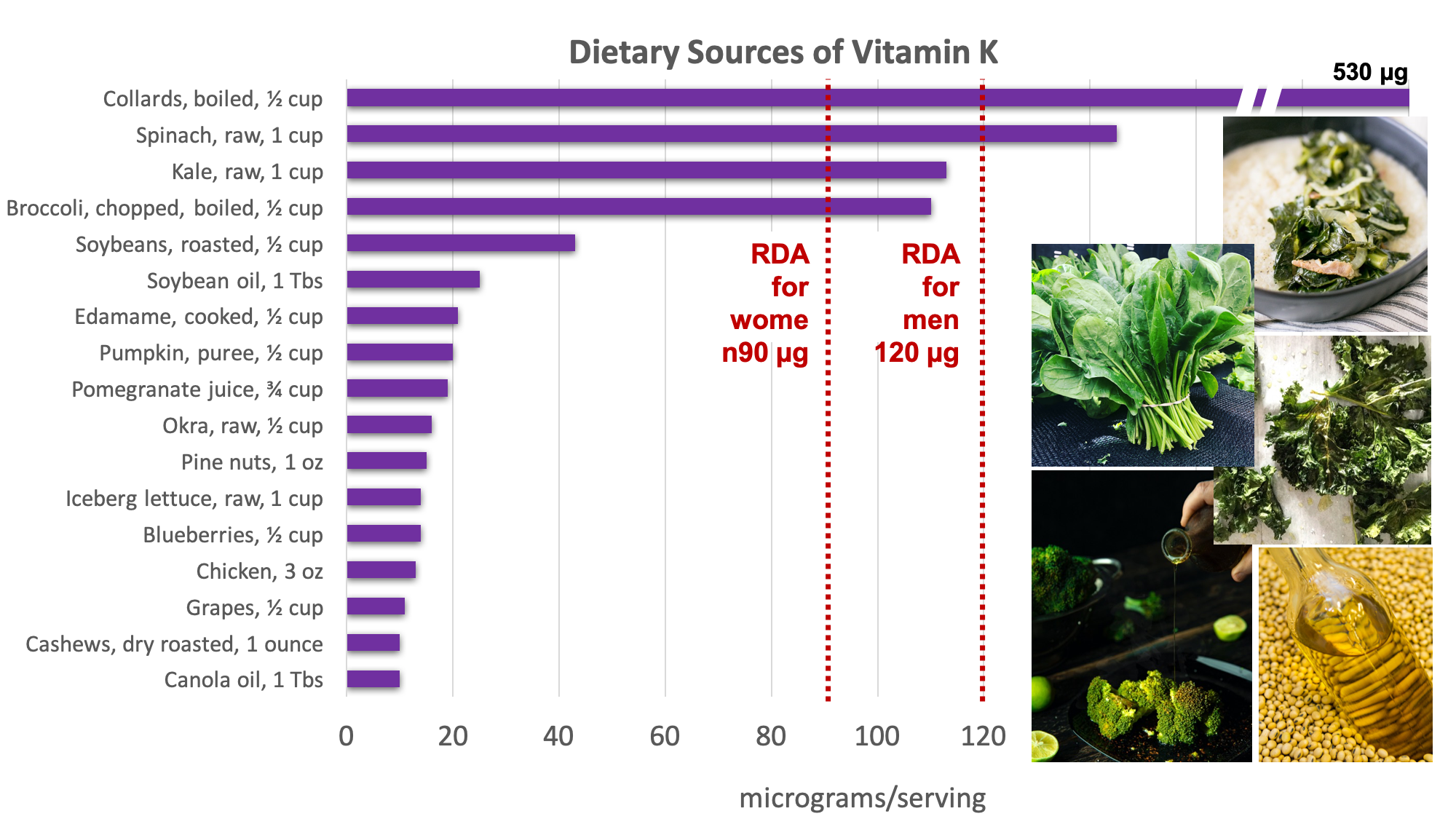 Vitamin K deficiency is rare, as most U.S. diets are adequate in vitamin K.5 A deficiency in vitamin K causes excessive bleeding (or ). When there is damage to a blood vessel that results in bleeding, like a small tear, the body can stop this bleeding through a cascade of reactions. Without adequate vitamin K, blood does not clot properly, and this small bleed can turn into a larger problem, causing excessive bleeding or hemorrhage. People at risk are those who have malabsorption and other gastrointestinal disorders such as celiac disease. Newborns are also at risk for vitamin K deficiency during the first few months of life, as there is poor transfer of vitamin K across the placenta, and breastmilk is also low in vitamin K. Therefore, it has become a routine practice to inject newborns with a single intramuscular dose of vitamin K to prevent hemorrhaging, as bleeding within the skull is especially life-threatening.

The Food and Nutrition Board (FNB) has not established a UL for vitamin K because it has a low potential for toxicity.

Fragments of cells that circulate and assist in blood clotting.

The fluid component of the blood.

A condition in which oxygen-carrying capacity of red blood cells is reduced, often from a reduction in hemoglobin.

A protein similar to hemoglobin but found in muscles; provides oxygen to muscles.

Iron that is part of the proteins hemoglobin and myoglobin; most bioavailable form of iron, found only in animal foods.

The mineral form of iron by itself, not a part of hemoglobin or myoglobin; found in foods from both plants and animals and is less bioavailable than heme iron.

A condition that develops from having insufficient iron levels in the body, resulting in fewer and smaller red blood cells that contain less hemoglobin.

An intense craving for and ingestion of non-food items such as paper, dirt, or clay.

A storage form of iron.

The transport protein for iron.

A type of anemia characterized by small red blood cells.

Also known as clotting; the process by which blood changes from a liquid to a semi-liquid or gel to form a clot.