When you eat food, the body’s digestive system breaks down dietary protein into individual amino acids, which are absorbed and used by cells to build other proteins and a few other macromolecules, such as DNA. Let’s follow the path that proteins take down the gastrointestinal tract and into the circulatory system.

Eggs are a good dietary source of protein and will be used as our example as we discuss the processes of digestion and absorption of protein. One egg, whether raw, hard-boiled, scrambled, or fried, supplies about six grams of protein.

In the image below, follow the numbers to see what happens to the protein in our egg at each site of digestion. 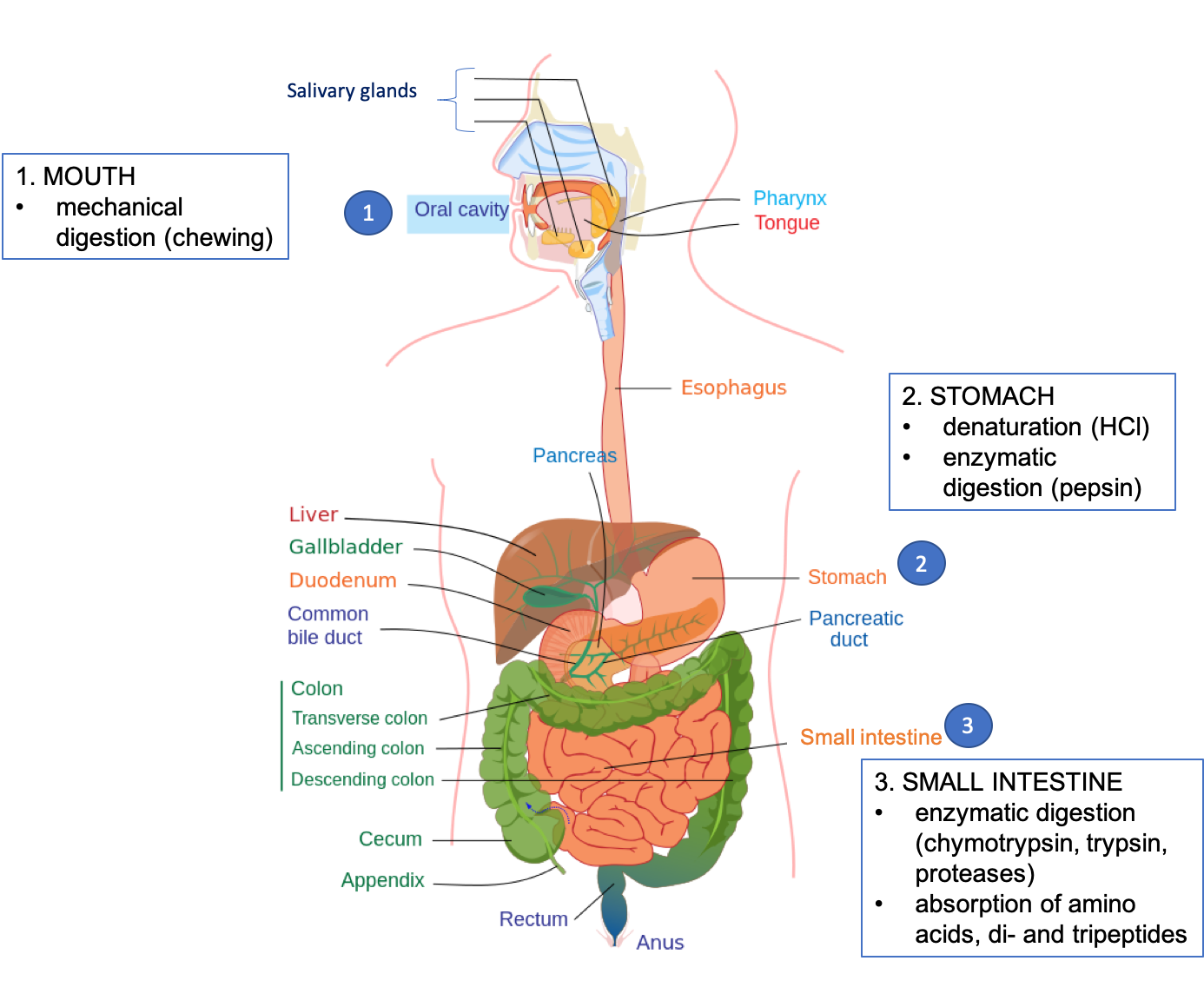 1 – Protein digestion in the mouth

Unless you are eating it raw, the first step in digesting an egg (or any other solid food) is chewing. The teeth begin the mechanical breakdown of large egg pieces into smaller pieces that can be swallowed. The salivary glands secrete saliva to aid swallowing and the passage of the partially mashed egg through the esophagus.

2 – Protein digestion in the stomach

The mashed egg pieces enter the stomach from the esophagus. As illustrated in the image below, both mechanical and chemical digestion take place in the stomach. The stomach releases gastric juices containing and the enzyme, , which initiate the chemical digestion of protein. Muscular contractions, called peristalsis, also aid in digestion. The powerful stomach contractions churn the partially digested protein into a more uniform mixture, which is called chyme.

Fig. 6.18. Protein digestion in the stomach

Because of the hydrochloric acid in the stomach, it has a very low pH of 1.5-3.5. The acidity of the stomach causes food proteins to denature, unfolding their three-dimensional structure to reveal just the polypeptide chain. This is the first step of chemical digestion of proteins. Recall that the three-dimensional structure of a protein is essential to its function, so in the stomach also destroys protein function. (This is why a protein such as insulin can’t be taken as an oral medication. Its function is destroyed in the digestive tract, first by denaturation and then further by enzymatic digestion. Instead, it has to be injected so that it is absorbed intact into the bloodstream.)

Fig. 6.19. In the stomach, proteins are denatured because of the acidity of hydrochloric acid.

Once proteins are denatured in the stomach, the peptide bonds linking amino acids together are more accessible for enzymatic digestion. That process is started by , an enzyme that is secreted by the cells that line the stomach and is activated by hydrochloric acid. Pepsin begins breaking peptide bonds, creating shorter polypeptides.

Fig. 6.20. Enzymatic digestion of proteins begins in the stomach with the action of the enzyme pepsin.

Proteins are large globular molecules, and their chemical breakdown requires time and mixing. Protein digestion in the stomach takes a longer time than carbohydrate digestion, but a shorter time than fat digestion. Eating a high-protein meal increases the amount of time required to sufficiently break down the meal in the stomach. Food remains in the stomach longer, making you feel full longer.

3 – Protein digestion and absorption in the small intestine

The two major pancreatic enzymes that digest proteins in the small intestine are and . Trypsin activates other protein-digesting enzymes called , and together, these enzymes break proteins down to tripeptides, dipeptides, and individual amino acids. The cells that line the small intestine release additional enzymes that also contribute to the enzymatic digestion of polypeptides.

Tripeptides, dipeptides, and single amino acids enter the enterocytes of the small intestine using active transport systems, which require ATP. Once inside, the tripeptides and dipeptides are all broken down to single amino acids, which are absorbed into the bloodstream. There are several different types of transport systems to accommodate different types of amino acids. Amino acids with structural similarities end up competing to use these transporters. That’s not a problem if your protein is coming from food, because it naturally contains a mix of amino acids. However, if you take high doses of amino acid supplements, those could theoretically interfere with absorption of other amino acids.

Fig. 6.21. Summary of protein digestion. Note that the lines representing polypeptide chains in the stomach consist of strings of amino acids connected by peptide bonds, even though the individual amino acids aren’t shown in this simplified representation.

Proteins that aren’t fully digested in the small intestine pass into the large intestine and are eventually excreted in the feces. Recall from the last page that plant-based proteins are a bit less digestible than animal proteins, because some proteins are bound in plant cell walls.

What happens to absorbed amino acids?

Once the amino acids are in the blood, they are transported to the liver. As with other macronutrients, the liver is the checkpoint for amino acid distribution and any further breakdown of amino acids, which is very minimal. Dietary amino acids then become part of the body’s amino acid pool.

Assuming the body has enough glucose and other sources of energy, those amino acids will be used in one of the following ways:

If there is not enough glucose or energy available, amino acids can also be used in one of these ways:

In order to use amino acids to make ATP, glucose, or fat, the nitrogen first has to be removed in a process called , which occurs in the liver and kidneys. The nitrogen is initially released as ammonia, and because ammonia is toxic, the liver transforms it into urea. Urea is then transported to the kidneys and excreted in the urine. Urea is a molecule that contains two nitrogens and is highly soluble in water. This makes it ideal for transporting excess nitrogen out of the body.

Because amino acids are building blocks that the body reserves in order to synthesize other proteins, more than 90 percent of the protein ingested does not get broken down further than the amino acid monomers.

An acid that is a component of gastric juices; creates an acidic environment in the stomach, killing bacteria and aiding in protein digestion.

An enzyme found in gastric juices; aids in the chemical breakdown of proteins.

When the three-dimensional structure of a protein is unfolded due to a change in the environment (e.g., acid, heat); results in loss of protein function.

An enzyme made by the pancreas; facilitates the chemical breakdown of proteins in the small intestine.

An enzyme that facilitates the chemical breakdown of protein in the small intestine; activates other protein-digesting enzymes.

Enzymes that aid in the chemical breakdown of proteins in the small intestine.

A process that removes nitrogen from amino acids before they are used to synthesize ATP, glucose, or fat.