We just learned that our body is composed of billions of cells. To function, these cells need essential nutrients—carbohydrates, proteins, fats, vitamins, and minerals—which we obtain from foods. However, before our cells can access these nutrients, foods need to be broken down or digested into their simplest units, so that the nutrients can be absorbed and enter the bloodstream. Digestion is a complex process that involves many organs and chemicals, as we’ll explore on this page.

An Overview of the Organs Involved in Digestion

The easiest way to understand the digestive system is to divide its organs into two main categories: the gastrointestinal tract (GI tract) and the accessory organs. 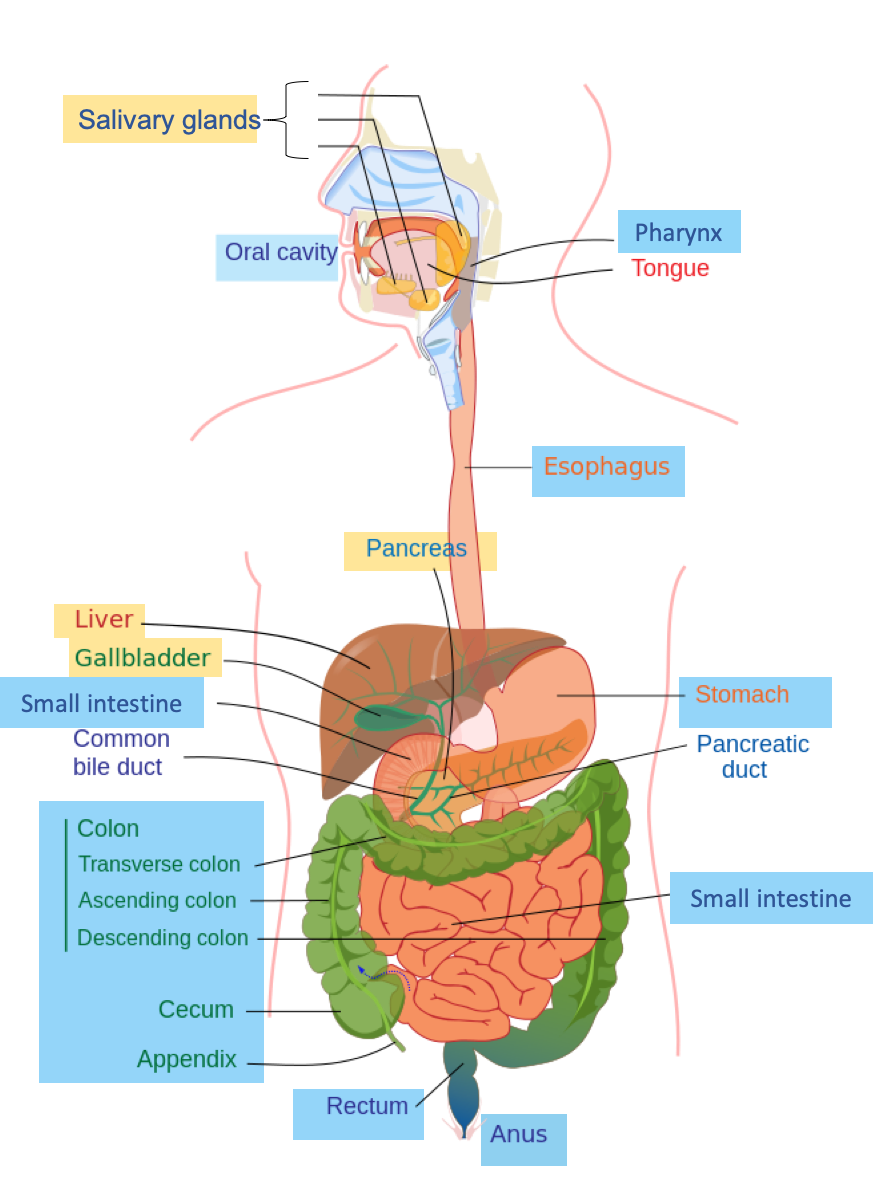 An Overview of the Digestive Process

The first of these processes, ingestion, refers to the entry of food into the GI tract through the mouth. There, the food is chewed and mixed with saliva, which contains enzymes that begin breaking down the carbohydrates and lipids in food. Mastication (chewing) increases the surface area of the food and allows for food to be broken into small enough pieces to be swallowed safely.

Food (now called a bolus since it has been chewed and moistened) leaves the mouth when the tongue and pharyngeal muscles propel the bolus into the esophagus. The bolus will travel down the esophagus through an involuntary process called peristalsis. Peristalsis consists of sequential, alternating waves of contraction and relaxation of the smooth muscles in the GI tract, which act to propel food along (Figure 3.10). These waves also play a role in mixing food with digestive juices. Peristalsis is so powerful that foods and liquids you swallow enter your stomach even if you are standing on your head. 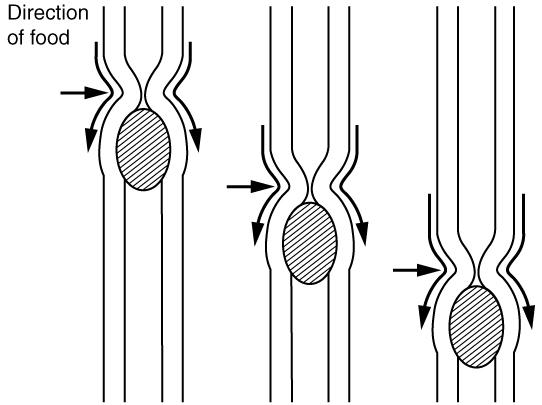 Figure 3.10. Peristalsis moves food through the digestive tract with alternating waves of muscle contraction and relaxation.

Digestion includes both mechanical and chemical processes. Mechanical digestion is a purely physical process of making food particles smaller to increase both surface area and mobility. Mechanical digestion does not change the chemical nature of the food. It includes mastication, tongue movements that help break food into smaller bits and mix it with saliva, mixing and churning of the stomach to further break food apart and expose more of its surface area to digestive juices, and peristalsis to help move food along the intestinal tract. Segmentation is also an example of mechanical digestion. Segmentation, which occurs mainly in the small intestine, consists of localized contractions of circular muscle of the GI tract. These contractions isolate small sections of the intestine, moving their contents back and forth while continuously subdividing, breaking up, and mixing the contents. By moving food back and forth in the intestinal tract, segmentation mixes food with digestive juices and facilitates absorption. 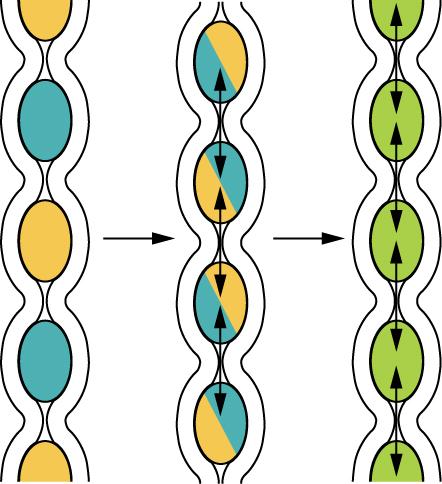 Figure 3.11. Segmentation separates chyme and then pushes it back together, mixing it and providing time for digestion and absorption.

In chemical digestion, digestive secretions that contain enzymes start to break down the macronutrients into their chemical building blocks (for example, starch into glucose). Enzymes are chemicals that help speed up or facilitate chemical reactions in the body. They bring together two compounds to react, without undergoing any changes themselves. For example, the main chemical reaction in digestion is hydrolysis. Hydrolysis is the splitting of one molecule into two with the addition of water. For example, the sugar sucrose (a double sugar) needs to be broken down to its building blocks, glucose and fructose (both single sugars), before it can be absorbed. This breakdown happens through hydrolysis, and the enzyme, sucrase, brings together the sucrose molecule and the water molecule to react. This process is illustrated in the following animation.

In excretion, the final step of digestion, undigested materials are removed from the body as feces. The feces is stored in the rectum until it leaves the body through the anus.

Functions of the Digestive Organs

Now that you have an overview of the digestive organs and the digestive process, let’s discuss in more detail what types of mechanical and chemical digestion take place in each of the organs of the GI tract. Let’s imagine eating a peanut butter and jelly sandwich that contains carbohydrates, proteins, fats, vitamins, and minerals. How does each organ participate in breaking this sandwich down into units that can be absorbed and utilized by cells throughout the body?

Ingestion of the peanut butter and jelly sandwich happens in the mouth or oral cavity. This is where mechanical and chemical digestion also begin. Teeth physically crush and grind the sandwich into smaller particles and mix the food particles with saliva. Salivary amylase (a digestive enzyme) is secreted by salivary glands (salivary glands produce saliva which is a mixture of water, enzymes, and other chemicals) and begins the chemical breakdown of carbohydrates in the bread, while lingual lipase (another digestive enzyme) starts the chemical breakdown of triglycerides (the main form of fat in food) in the peanut butter.

The esophagus is a muscular tube that transports food from the mouth to the stomach. No chemical digestion occurs while the bolus is mechanically propelled through this tube by peristalsis.

When the peanut butter and jelly sandwich enters the stomach, a highly muscular organ, powerful peristaltic contractions help mash, pulverize, and churn it into chyme. Chyme is a semiliquid mass of partially digested food along with gastric juices secreted by cells in the stomach. These gastric juices contain hydrochloric acid, which lowers the pH of the chyme in the stomach. This acidic environment kills many bacteria or other germs that may have been present in the food, and it causes the three-dimensional structure of dietary proteins to unfold. Gastric juices also contain the enzyme pepsin, which begins the chemical breakdown of proteins in the peanut butter and bread. Gastric lipase continues the breakdown of fat from the peanut butter.

Chyme released from the stomach enters the small intestine, where most digestion and absorption occurs. The small intestine is divided into three parts, all part of one continuous tube: the duodenum, the jejunum, and the ileum.

Once the chyme enters the duodenum (the first segment of the small intestine), the pancreas and gallbladder are stimulated to release juices that aid in digestion. The pancreas (located behind the stomach) produces and secretes pancreatic juices which consist mostly of water, but also contain bicarbonate that neutralizes the acidity of the stomach-derived chyme and enzymes that further break down proteins, carbohydrates, and lipids. The small intestine’s absorptive cells also synthesize digestive enzymes that aid in the breakdown of sugars and proteins.

The gallbladder (a small sac located behind the liver) stores, concentrates, and secretes a fluid called bile that helps to digest fats. Bile is made in the liver and stored in the gallbladder. Bile is an emulsifier; it acts similar to a detergent (that would remove grease from a frying pan) by breaking large fat droplets into smaller fat droplets so they can mix with the watery digestive juices.

Peristalsis and segmentation control the movement and mixing of chyme through the small intestine. As in the esophagus and stomach, peristalsis consists of circular waves of smooth muscle contractions that propel food forward. Segmentation helps to mix food with digestive juices and facilitates absorption.

Nutrient absorption takes place mainly in the latter part of the small intestine, the ileum.

The small intestine is perfectly structured for maximizing nutrient absorption. Its surface area is greater than 200 square meters—about the size of a tennis court! The large surface area is due to the multiple levels of folding, villi, and microvilli that cover the internal tissue of the small intestine. Villi are tiny finger-like projections that are covered with enterocytes or absorptive cells. The absorptive cell membrane is made of even smaller projections, called microvilli (Figure 3.12). These microvilli are referred to collectively as the brush border since their appearance resembles the bristles on a brush. 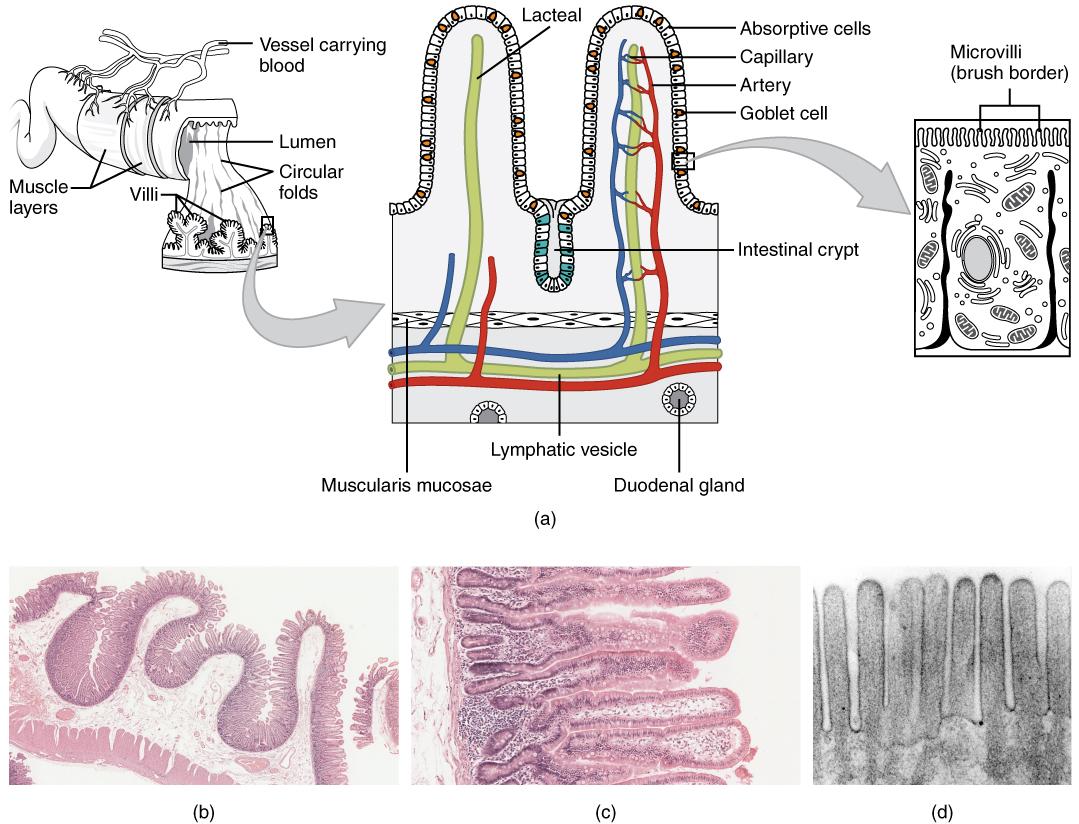 Digested nutrients are absorbed into either capillaries or lymphatic vessels contained within each villus. Amino acids (from protein digestion), small fatty acids (from triglyceride digestion), sugars (from carbohydrate digestion), water-soluble vitamins, and minerals are transported from the intestinal cells into the bloodstream through capillaries. The larger fatty acids, fat-soluble vitamins, and other lipids (that are packaged in lipid transport particles) are transported first through lymphatic vessels and then eventually meet up with the blood. Water-soluble nutrients that enter the bloodstream are transported directly to the liver where the liver processes, stores, or releases these nutrients to other body cells. 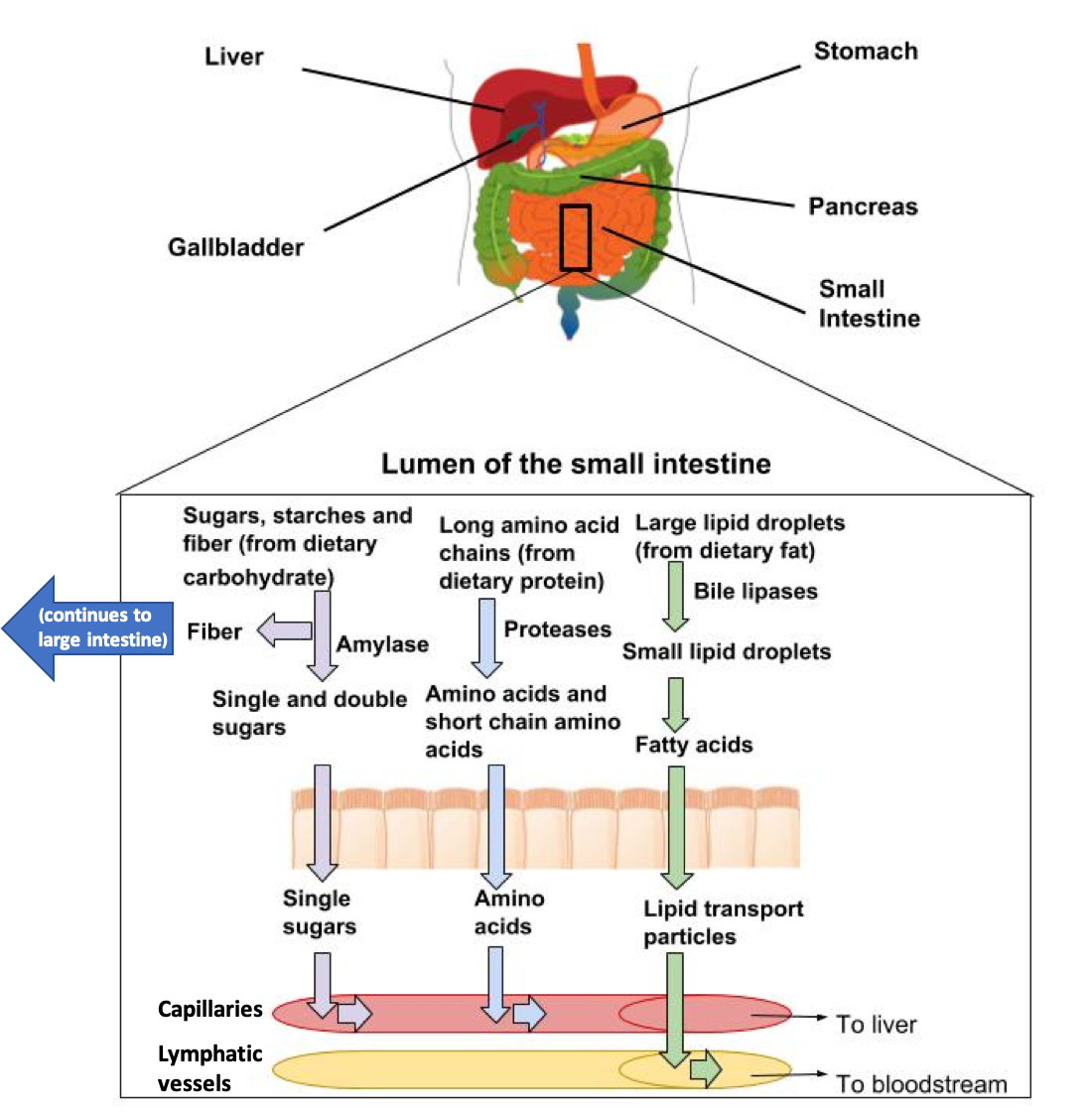 Figure 3.13. The digestion and absorption of nutrients in the small intestine.

Most of the nutrients from the peanut butter and jelly sandwich have now been digested and absorbed. Any components that still remain (usually less than ten percent of food consumed) and the indigestible fiber move from the small intestine to the large intestine (colon). A main task of the large intestine is to absorb much of the remaining water. Water is present not only from the solid foods and beverages consumed, but also the digestive juices released by the stomach and pancreas. As water is reabsorbed, liquid chyme becomes a semisolid, referred to as feces. Feces is composed of undigested food residues, unabsorbed digested substances, millions of bacteria, old cells from the lining of the GI tract, inorganic salts, and enough water to let it pass smoothly out of the body.

Feces is stored in the rectum (a temporary holding area) until it is expelled through the anus via defecation. No further chemical breakdown of food takes place in the large intestine except that accomplished by the bacteria that inhabit this portion of the GI tract. There are trillions of bacteria residing in the large intestine (referred to as the bacterial flora), exceeding the total number of cells in the human body. This may seem rather unpleasant, but the great majority of bacteria in the large intestine are harmless and many are even beneficial—facilitating chemical digestion and absorption, improving immune function, and synthesizing vitamins such as biotin, pantothenic acid, and vitamin K.

The figure below summarizes the functions of the digestive organs. 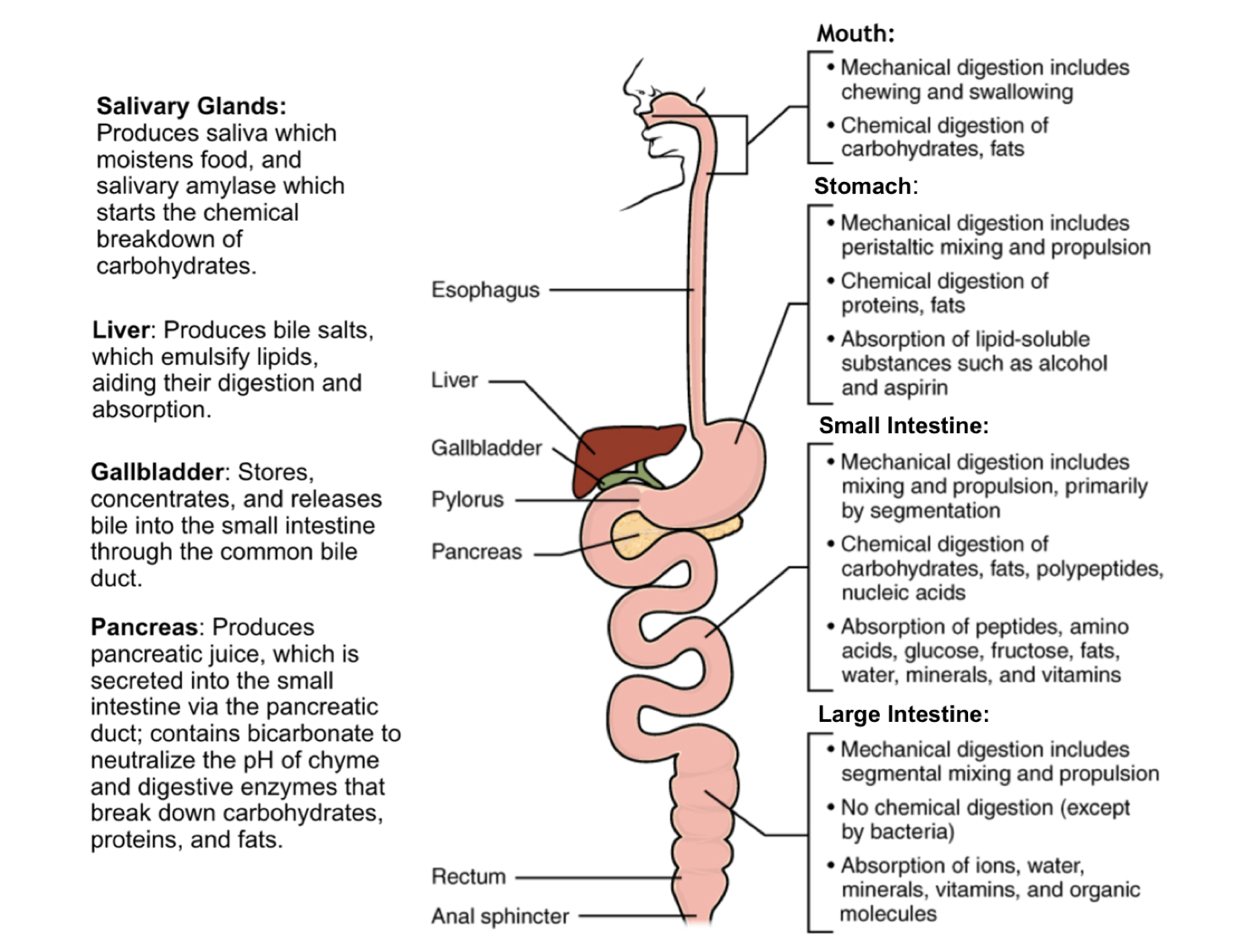