Water is the foundation of all life. The surface of the earth is 70% water, and human beings are mostly water, ranging from about 75% of body mass in infants, 50–60% in adults, and as low as 45% in old age. (The percent of body water changes with development, because the proportions of muscle, fat, bone, and other tissues change from infancy to adulthood.) Of all the nutrients, water is the most critical, as its absence proves lethal within a few days. The importance of water in the human body can be loosely categorized into four basic functions: transportation vehicle, medium for chemical reactions, lubricant/shock absorber, and temperature regulator.

Maintaining the right level of water in your body is crucial to survival, as either too little or too much will result in less-than-optimal functioning. Several minerals are key to regulating water balance in different compartments of the body; the most important of these are sodium, potassium, and chloride. 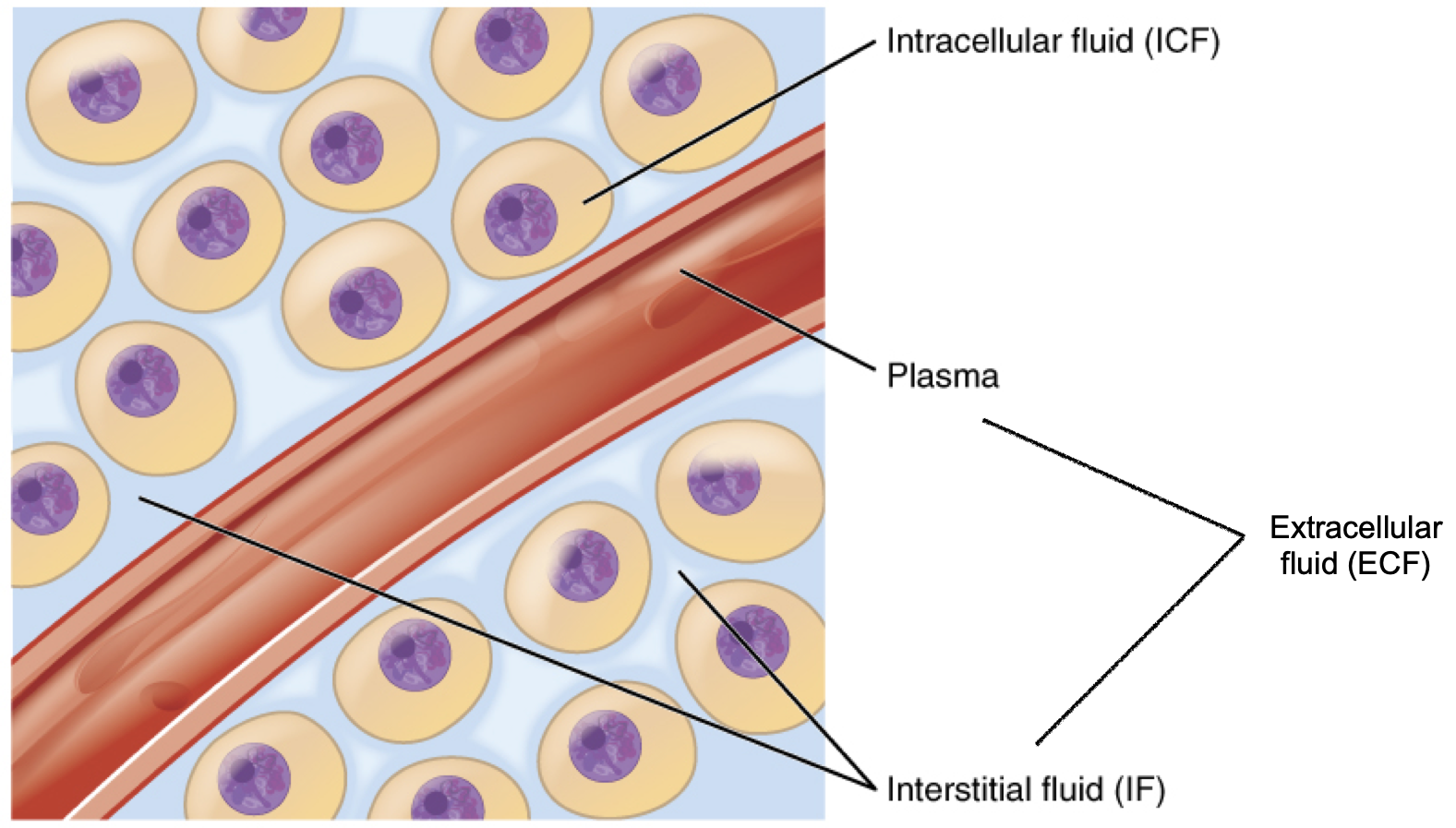 Figure 8.6. Fluid compartments in the human body. The intracellular fluid (ICF) is the fluid within cells. The extracellular fluid (ECF) includes both the blood plasma and the interstitial fluid (IF) between the cells.

Although water makes up the largest percentage of body volume, it is not actually pure water, but rather a mixture of dissolved substances (solutes) that are critical to life. These solutes include electrolytes, substances that dissociate into charged ions when dissolved in water. For example, sodium chloride (the chemical name for table salt) dissociates into sodium (Na+) and chloride (Cl−) in water. In extracellular fluid, sodium is the major positively-charged electrolyte (or cation), and chloride (Cl−) is the major negatively-charged electrolyte (or anion). Potassium (K+) is the major cation inside cells. Together, these electrolytes are involved in many body functions, including water balance, acid-base balance, and assisting in the transmission of electrical impulses along cell membranes in nerves and muscles.

One of the essential homeostatic functions of the body is to maintain fluid and electrolyte balance within cells and their surrounding environment. Cell membranes are selectively permeable: Water can move freely through the cell membrane, while other substances, such as electrolytes, require special transport proteins, channels, and often energy. The movement of water between the intracellular and extracellular fluid happens by osmosis, which is simply the movement of water through a selectively permeable membrane from an area where solutes are less concentrated to an area where solutes are more concentrated (Figure 8.7). 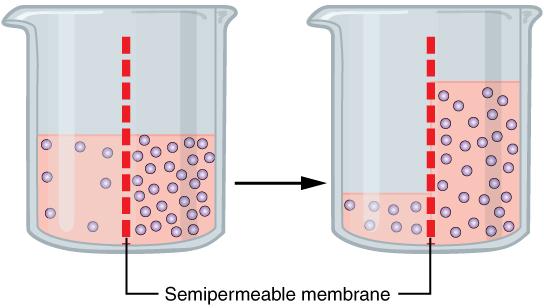 To maintain water and electrolyte balance, cells control the movement of electrolytes across their membranes, and water follows the electrolytes by osmosis. The health of the cell depends on proper fluid and electrolyte balance. If the body’s fluid and electrolyte levels change too rapidly, cells can struggle to correct the imbalance quickly enough. For example, consider a person exercising strenuously, losing water and electrolytes in the form of sweat, and drinking excessive amounts of water. The excess water dilutes the sodium in the blood, leading to hyponatremia, or low blood sodium concentrations. Sodium levels within the cells are now more concentrated, leading water to enter the cells by osmosis. As a result, the cells swell with water and can burst if the imbalance is severe and prolonged.

In contrast, the opposite situation can occur in a person exercising strenuously for a long duration with inadequate fluid intake. This can lead to dehydration and hypernatremia, or elevated blood sodium levels. The high concentration of sodium in the extracellular fluid causes water to leave cells by osmosis, making them shrink (Figure 8.8). This scenario can also occur anytime a person is dehydrated because of significant fluid loss, such as from diarrhea and/or vomiting caused by illness.

When a person becomes dehydrated, and solutes like sodium become too concentrated in the blood, the thirst response is triggered. Sensory receptors in the thirst center in the hypothalamus monitor the concentration of solutes of the blood. If blood solutes (like sodium) increase above ideal levels, the hypothalamus transmits signals that result in a conscious awareness of thirst. The hypothalamus also communicates to the kidneys to decrease water output through the urine. 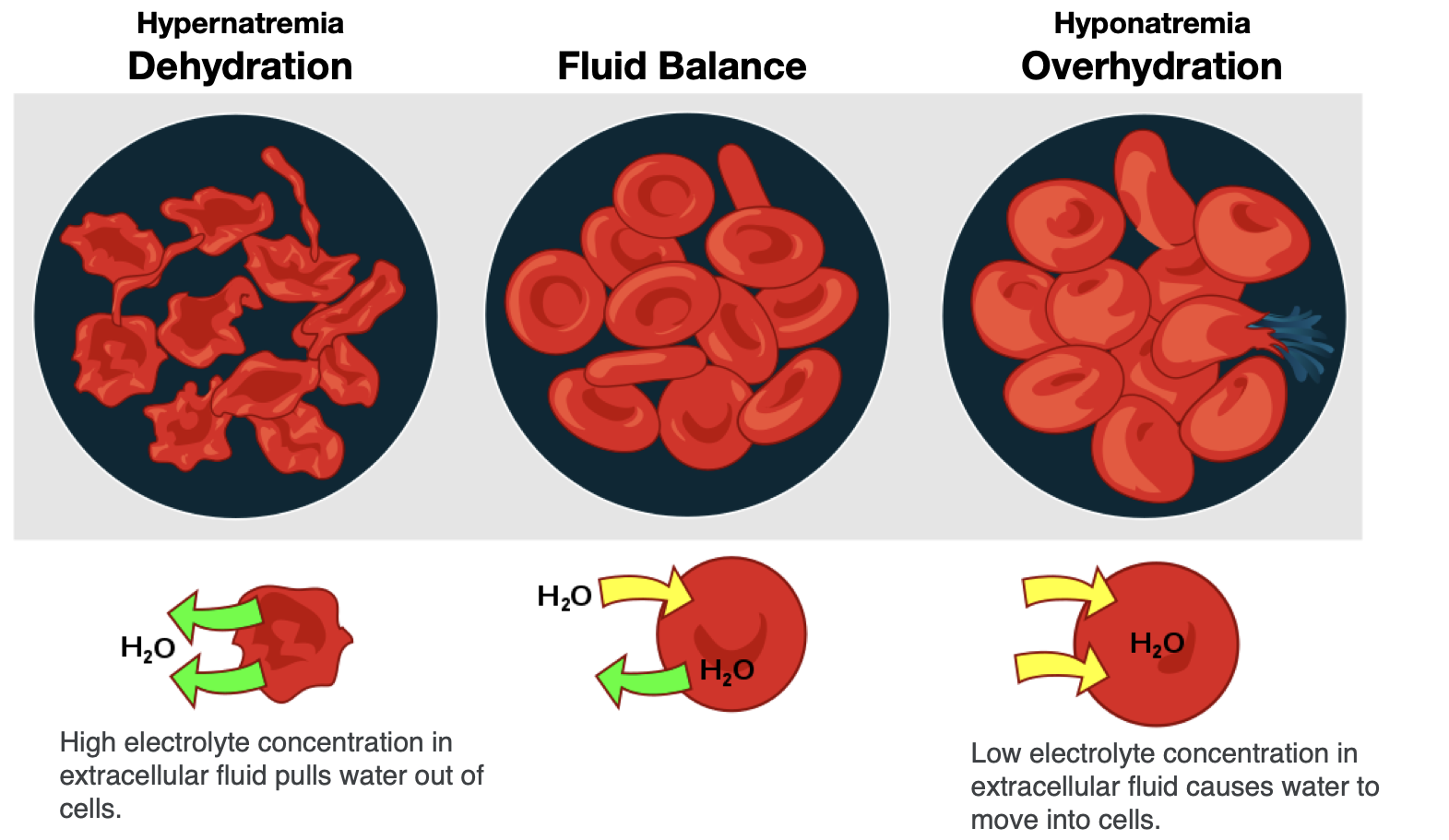 The cell is able to control the movement of the two major cations, sodium and potassium, with a sodium-potassium pump (Na+/K+ pump). This pump transports sodium out of cells while moving potassium into cells.

Figure 8.9. The sodium-potassium pump is found in many cell (plasma) membranes. Powered by ATP, the pump moves sodium and potassium ions in opposite directions, each against its concentration gradient. In a single cycle of the pump, three sodium ions are extruded from and two potassium ions are imported into the cell.

Stimulating a muscle contraction also involves the movement of sodium ions. For a muscle to contract, a nerve impulse travels to a muscle. The movement of the sodium current in the nerve signals the muscle cell membrane to open and sodium rushes in, creating another current that travels along the muscle and eventually leading to muscle contraction. In both nerve and muscle cells, the sodium that went in during a stimulus now has to be moved out by the sodium-potassium pump in order for the nerve and muscle cell to be stimulated again.

Although sodium often gets vilianized because of its link to hypertension, it is an essential nutrient that is vital for survival. As previously discussed, it is not only important for fluid balance, but also nerve impulse transmission and muscle contraction.

Sodium can be found naturally in a variety of whole foods, but most sodium in the typical American diet comes from processed and prepared foods. Manufacturers add salt to foods to improve texture and flavor, and also to act as a preservative. Even foods that you wouldn’t consider to be salty, like breakfasts cereals, can have greater than 10% of the DV for sodium. Most Americans exceed the adequate intake recommendation of 1500 mg per day, averaging 3,440 mg per day.1 The sources of sodium in the American diet are shown below. 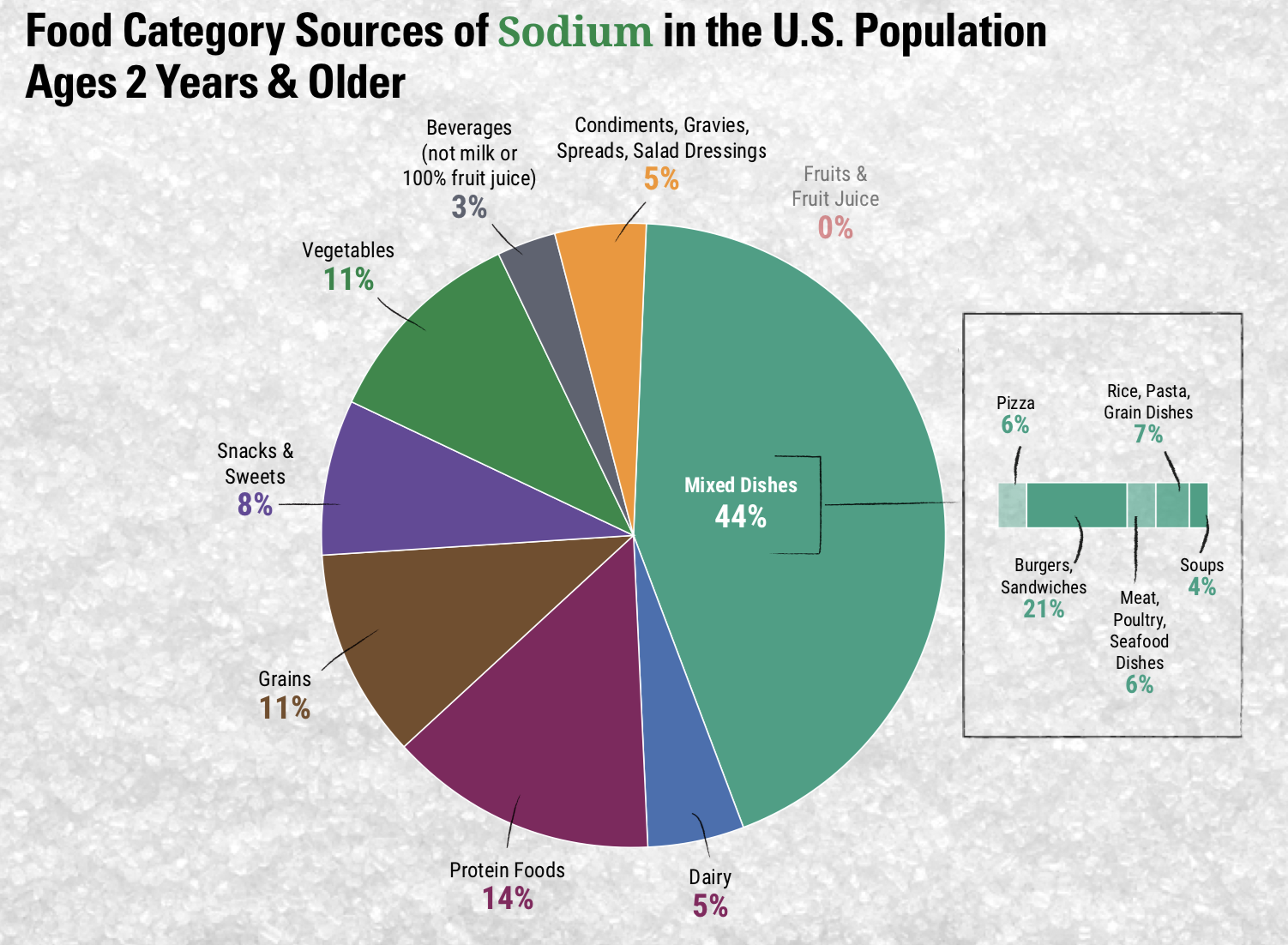 Figure 8.10. Food category sources of sodium in the U.S. population, ages 2 years and older.1 The largest source of sodium (44%) is mixed dishes such as burgers, sandwiches, pasta dishes and pizza.

This slideshow from WebMD, “Sources of Salt and How to Cut Back,” offers some tools for reducing dietary sodium.

Deficiencies of sodium are extremely rare since sodium is so prevalent in the American diet. It is too much sodium that is the main concern. High dietary intake of sodium is one risk factor for hypertension, or high blood pressure. In many people with hypertension, cutting salt intake can help reduce their blood pressure. However, studies have shown that this isn’t always the case. According to Harvard Medical School, “About 60% of people with high blood pressure are thought to be salt-sensitive — [a trait that means your blood pressure increases with a high-sodium diet]. So are about a quarter of people with normal blood pressure, although they may develop high blood pressure later, since salt sensitivity increases with age and weight gain.”2 Genetics, race, sex, weight, and physical activity level are determinants of salt sensitivity. African Americans, women, and overweight individuals are more salt-sensitive than others.

The Dietary Approaches to Stop Hypertension (DASH) is an eating pattern that has been tested in randomized controlled trials and shown to reduce blood pressure and LDL cholesterol levels, resulting in decreased cardiovascular disease risk.1 According to the Dietary Guidelines for Americans, “The DASH Eating Plan is high in vegetables, fruits, low-fat dairy products, whole grains, poultry, fish, beans, and nuts and is low in sweets, sugar-sweetened beverages, and red meats. It is low in saturated fats and rich in potassium, calcium, and magnesium, as well as dietary fiber and protein. It also is lower in sodium than the typical American diet, and includes menus with two levels of sodium, 2,300 and 1,500 mg per day.” Additional details on DASH are available on the website of the National Heart, Lung, and Blood Institute website.

Although the updated dietary reference intake (DRI) for sodium does not include an upper intake level (UL), the updated adequate intake (AI) considers chronic disease risk.3 There is a high strength of evidence that reducing sodium intake reduces blood pressure and therefore reduces cardiovascular disease risk.4

Potassium is present in all body tissues and is the most abundant positively charged electrolyte in the intracellular fluid. As discussed previously, it is required for proper fluid balance, nerve transmission, and muscle contraction.5

Potassium is found in a wide variety of fresh plant and animal foods. Fresh fruits and vegetables are excellent sources of potassium, as well as dairy products (e.g., milk and yogurt), beans (e.g., lentils and soybeans), and meat (e.g., salmon and beef).5 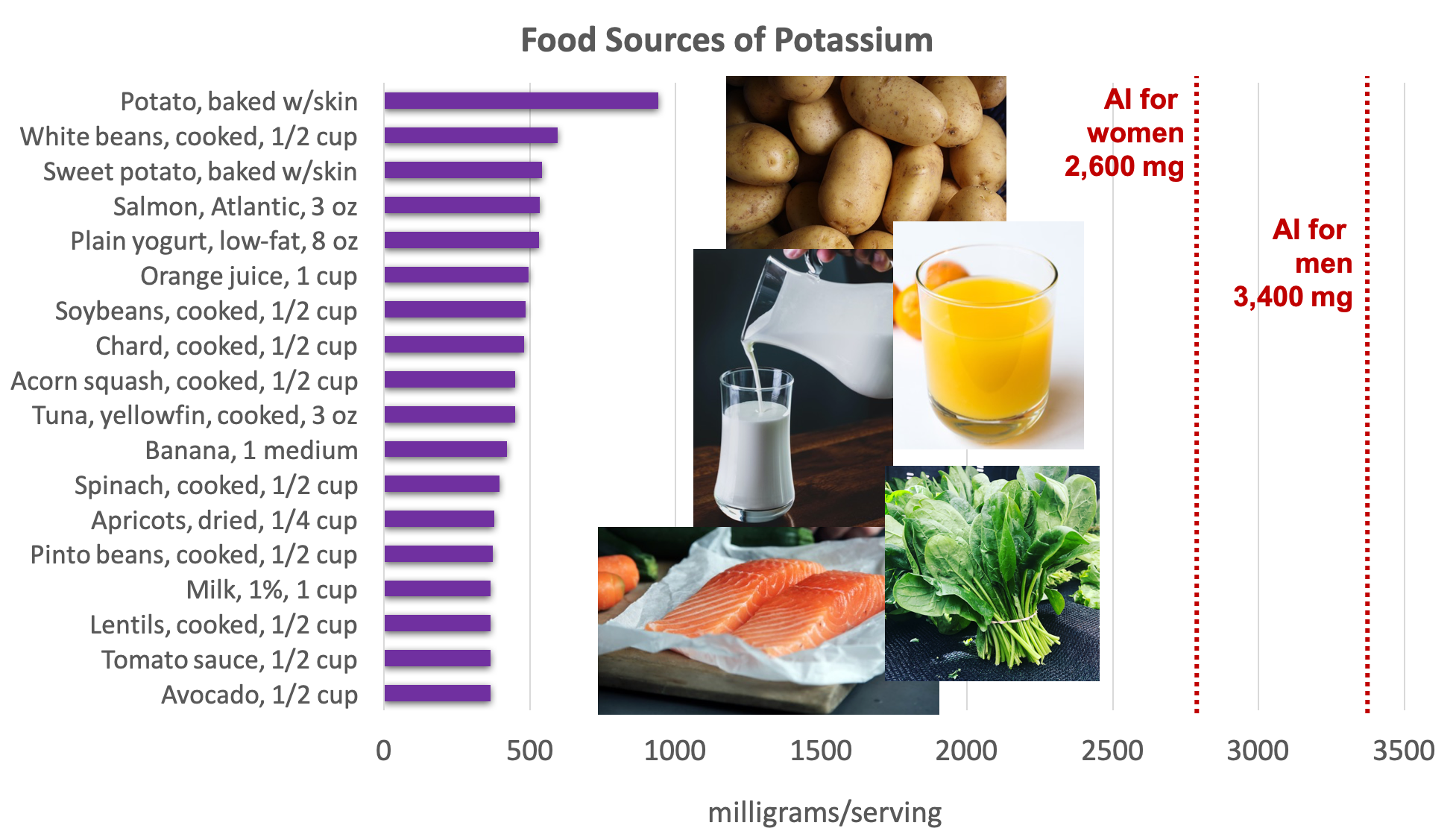 The 2015–2020 Dietary Guidelines for Americans identifies potassium as a “nutrient of public health concern,” because dietary surveys consistently show that people in the United States consume less potassium than is recommended.1 This is a nutritional gap that must be corrected through food since most dietary supplements do not contain significant amounts of potassium.

Chloride helps with fluid balance, acid-base balance, and nerve cell transmission. It is also a component of hydrochloric acid, which aids digestion in the stomach.8

Chloride deficiency is rare since most foods containing sodium also provide chloride, and sodium intake in the American diet is high.8