Food is one of life’s greatest pleasures. It offers amazing flavors, aromas, and textures. Food also provides our body with essential nutrients and non-nutrients like phytochemicals, both of which are vital to health. This section will discuss the six classes of nutrients and how these nutrients can be classified.

are chemical substances found in food that are required by the body to provide energy, give the body structure, and help regulate chemical processes. There are six classes of nutrients:

Nutrients can be further classified as either or and either or , as well as whether or not they provide energy to the body (). We’ll discuss these different ways of classifying nutrients in the following sections. 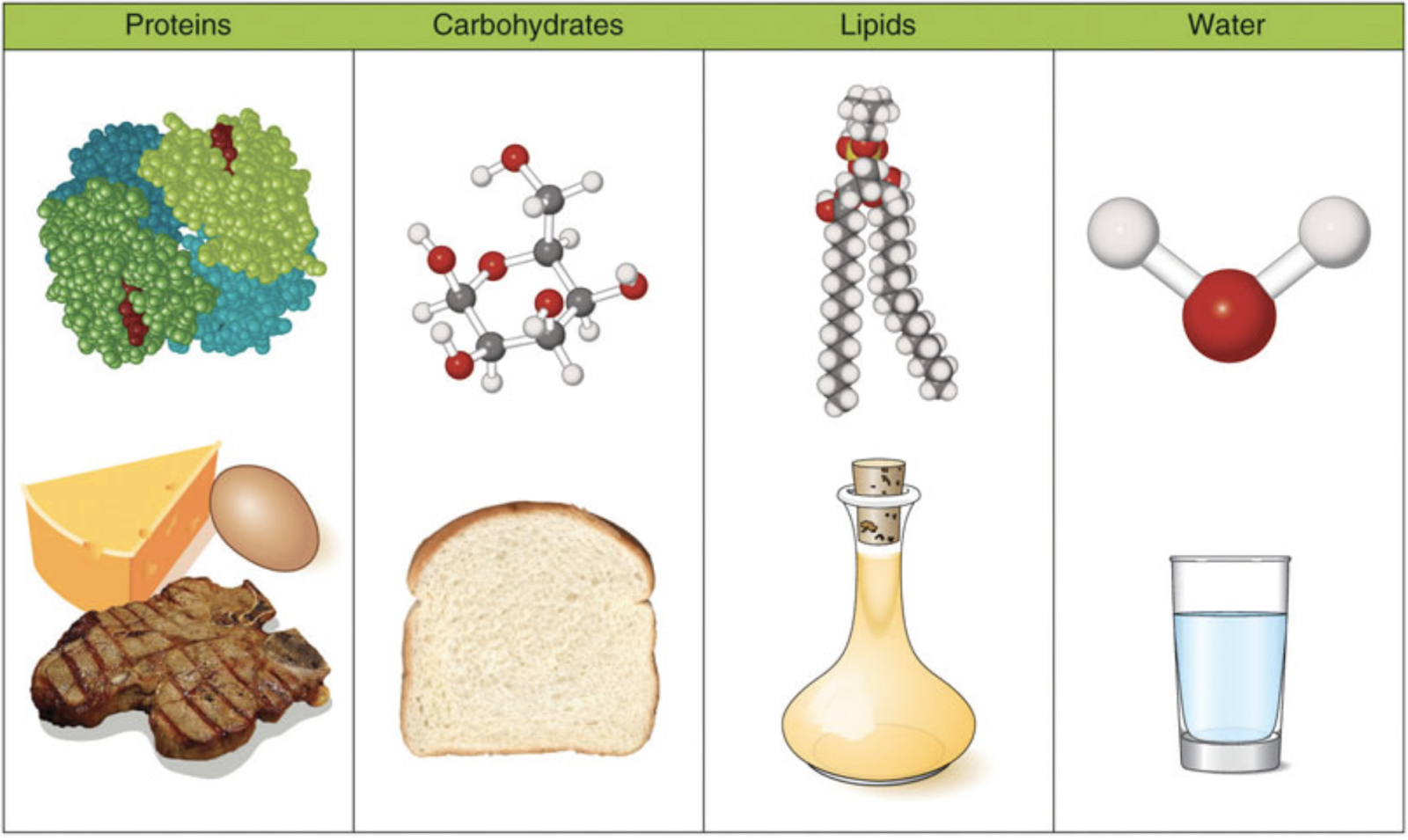 Figure 1.5. Macronutrients include proteins, carbohydrates, lipids, and water. This figure illustrates each nutrient’s chemical structure and examples of food sources.

are also a family of molecules composed of carbon, hydrogen, and oxygen, but unlike carbohydrates, they are insoluble in water. Lipids are found predominantly in butter, oils, meats, dairy products, nuts and seeds, and in many processed foods. The three main types of lipids are triglycerides, phospholipids, and sterols. The main job of lipids is to provide or store energy. In addition to energy storage, lipids serve as major components of cell membranes, surround and protect organs, provide insulation to aid in temperature regulation, and regulate many other functions in the body.

are large molecules composed of chains of amino acids, which are simple subunits made of carbon, oxygen, hydrogen, and nitrogen. Food sources of proteins include meats, dairy products, seafood, and a variety of plant-based foods, like beans, nuts, and seeds. The word protein comes from a Greek word meaning “of primary importance,” which is an apt description of these macronutrients as they are also known as the “workhorses” of life. Proteins provide structure to bones, muscles, and skin, and they play a role in conducting most of the chemical reactions occurring in the body. Scientists estimate that more than 100,000 different proteins exist within the human body. Proteins can also provide energy, though this is a relatively minor function, as carbohydrates and fat are preferred energy sources.

There is one other nutrient that we must have in large quantities: . Water does not contain carbon but is composed of two hydrogens and one oxygen per molecule of water. More than 60 percent of your total body weight is water. Without it, nothing could be transported in or out of the body, chemical reactions would not occur, organs would not be cushioned, and body temperature would fluctuate widely. On average, an adult consumes just over two liters of water per day from food and drink combined. Since water is so critical for life’s basic processes, we can only survive a few days without it, making it one of the most vital nutrients.

are nutrients required by the body in smaller amounts, but they’re still essential for carrying out bodily functions. Micronutrients include all of the essential minerals and vitamins. There are 16 essential minerals and 13 essential vitamins (Table 1.1 and Table 1.2). In contrast to carbohydrates, lipids, and proteins, micronutrients are not a source of energy, but they assist in the process of energy metabolism as cofactors or components of enzymes (known as coenzymes). are proteins that catalyze (or accelerate) chemical reactions in the body; they’re involved in all aspects of body functions, including producing energy, digesting nutrients, and building macromolecules.

are inorganic substances that are classified depending on how much the body requires. , such as molybdenum, selenium, zinc, iron, and iodine, are only required in amounts of a few milligrams or less per day. , such as calcium, magnesium, potassium, sodium, and phosphorus, are required in amounts of hundreds of milligrams or more per day. Many minerals are critical for enzyme function, and others are used to maintain fluid balance, build bone tissue, synthesize hormones, transmit nerve impulses, contract and relax muscles, and protect against harmful free radicals in the body. To give you an appreciation of the many functions of minerals, the table below has a complete list of all the minerals and their major functions. (Note: There is no need to memorize these minerals and functions at this point in the course.)

Table 1.1. Minerals and their major functions

are organic nutrients that are categorized based on their solubility in water. The are vitamin C and all of the B vitamins. The are vitamins A, D, E, and K. Vitamins are required to perform many functions in the body, such as making red blood cells, synthesizing bone tissue, and playing a role in normal vision, nervous system function, and immune function. To give you an appreciation of the many functions of vitamins, the table below lists the 13 essential vitamins and their major functions. (Note: There is no need to memorize these vitamins and functions at this point in the course.)

Table 1.2. Vitamins and their major functions

As you might suspect based on the major functions of vitamins listed above, vitamin deficiencies can cause severe health problems and even death. For example, a deficiency in niacin causes a disease called pellagra, which was common in the early twentieth century in some parts of the United States. The common signs and symptoms of pellagra are known as the “4D’s—diarrhea, dermatitis, dementia, and death.” Until scientists discovered that better diets relieved the signs and symptoms of pellagra, many people with the disease ended up hospitalized and in asylums awaiting death. The following video gives an overview of pellagra and how its cure was discovered through a change in diet.

The macronutrients—carbohydrate, protein, and fat—are the only nutrients that provide energy to the body. The energy from macronutrients comes from their chemical bonds. This chemical energy is converted into cellular energy that can be utilized to perform work, allowing cells to conduct their basic functions. Although vitamins also have energy in their chemical bonds, our bodies do not make the enzymes to break these bonds and release this energy. (This is fortunate, as we need vitamins for their specific functions, and breaking them down to use for energy would be a waste.)

Food energy is measured in kilocalories (kcals). A kilocalorie is the amount of energy needed to raise 1 kilogram of water by 1 degree Celsius. The kilocalories stored in food can be determined by putting the food into a bomb calorimeter and measuring the energy output (energy = heat produced). 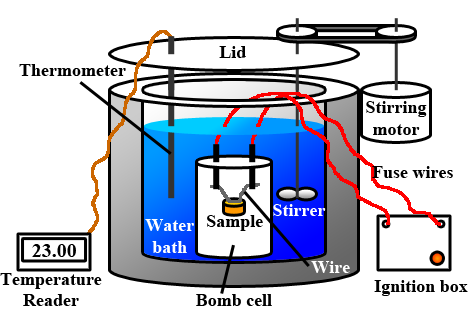 In the US, the kilocalorie (kcal) is the most commonly used unit of energy and is often just referred to as a calorie. Strictly speaking, a kcal is 1000 calories. In nutrition, the term calories almost always refers to kcals. Sometimes the kcal is indicated by capitalizing calories as “Calories.” For the sake of simplicity, we’ll use the terms “calories” and “kilocalories” interchangeably in this book.

Below is a list of energy sources in the diet from lowest to highest calories per gram (a gram is about the weight of a paperclip). Notice the addition of alcohol. Although alcohol does provide energy, it isn’t a nutrient, because it isn’t required as a source of nourishment to the body.

When you look at the Nutrition Facts panel on a food label, you’ll see that it lists calories, as well as grams of total fat, total carbohydrates, and protein per serving. From these values, you can estimate the amount of calories coming from the different macronutrients.

Looking at the values in the Nutrition Facts label, you can convert grams into calories by doing the following calculations:

So far, we’ve categorized nutrients as macronutrients or micronutrients and based on whether or not they’re energy-yielding. There is one more way to categorize nutrients: organic or inorganic. When you think of the word “organic,” you might think of how foods are produced (with or without synthetic fertilizers and pesticides), but in this case we are referring to the chemical structure of a nutrient.

The organic nutrients include the macronutrients (carbohydrate, protein, and fat) and vitamins. An nutrient contains both carbon and hydrogen. Organic nutrients can be made by living organisms and are complex, made up of many elements (carbon, hydrogen, oxygen, and sometimes nitrogen) bonded together. In a sense, they are “alive,” and therefore can be destroyed or broken down.

Vitamin E (shown below) is an organic molecule, because it contains both carbon and hydrogen atoms. Vitamin E is synthesized by plants and can be destroyed by heat during cooking.

Inorganic nutrients include both water and minerals. nutrients do not contain both carbon and hydrogen, and they are not created or destroyed. Minerals can’t be destroyed, so they are the ash left when a food is burned to completion. Minerals are also not digested or broken down, as they are already in their simplest form. They are absorbed as-is, then shuttled around the body for their different functions, and then excreted.

The different categories of nutrients are summarized in the following table.

Chemical molecules that are found in foods; required by our bodies to maintain life and support growth and health.

Nutrients that are needed in large amounts and include carbohydrates, lipids, and proteins.

Nutrients required by the body in smaller amounts; include all of the essential minerals and vitamins.

Complex nutrients that can be made by living organisms from many elements (especially carbon, hydrogen, oxygen, and sometimes nitrogen).

Nutrients that do not contain both carbon and hydrogen; can not be created or destroyed.

Nutrients that provide energy to the body; include carbohydrates, proteins, and fats.

Macromolecules composed of carbon, hydrogen, and oxygen; major fuel source for all cells of the body.

A family of organic compounds that are mostly insoluble in water; the three main types are triglycerides, sterols, and phospholipids.

Macromolecules composed of chains of amino acids, which are simple subunits made of carbon, oxygen, hydrogen, and nitrogen.

One of the most vital nutrients; composed of two hydrogens and one oxygen per molecule of water.

Proteins that help speed up or facilitate chemical reactions in the body; they bring together two compounds to react, without undergoing any changes themselves.

Inorganic elements classified according to how much the body requires.

Minerals required by the body in amounts of 100 milligrams or less per day.

Minerals required by the body in amounts greater than 100 milligrams per day.

Essential, non-caloric, organic micronutrients that are required for many bodily functions.

Vitamins that dissolve in water; include vitamin C and all of the B vitamins.

Vitamins that dissolve in fat; include vitamins A, D, E, and K.