As we just learned in the previous section, cells are the most basic building blocks of life. Cells make up your tissues, organs, and ultimately, you as a human being. And every one of those cells needs energy to perform their specific functions. Where does that energy come from? It comes from the macronutrients that we eat—carbohydrates, protein, and fat. In order to understand how the cells of the body put that energy to use, you must have a basic understanding of photosynthesis, cellular respiration, and the relationship between these two processes.

is essential to all life on earth; both plants and animals depend on it. It is the only biological process that can capture energy that originates from sunlight and convert it into a chemical compound (glucose) that every organism uses to power its daily functions. Photosynthesis is also a source of oxygen necessary for many living organisms. 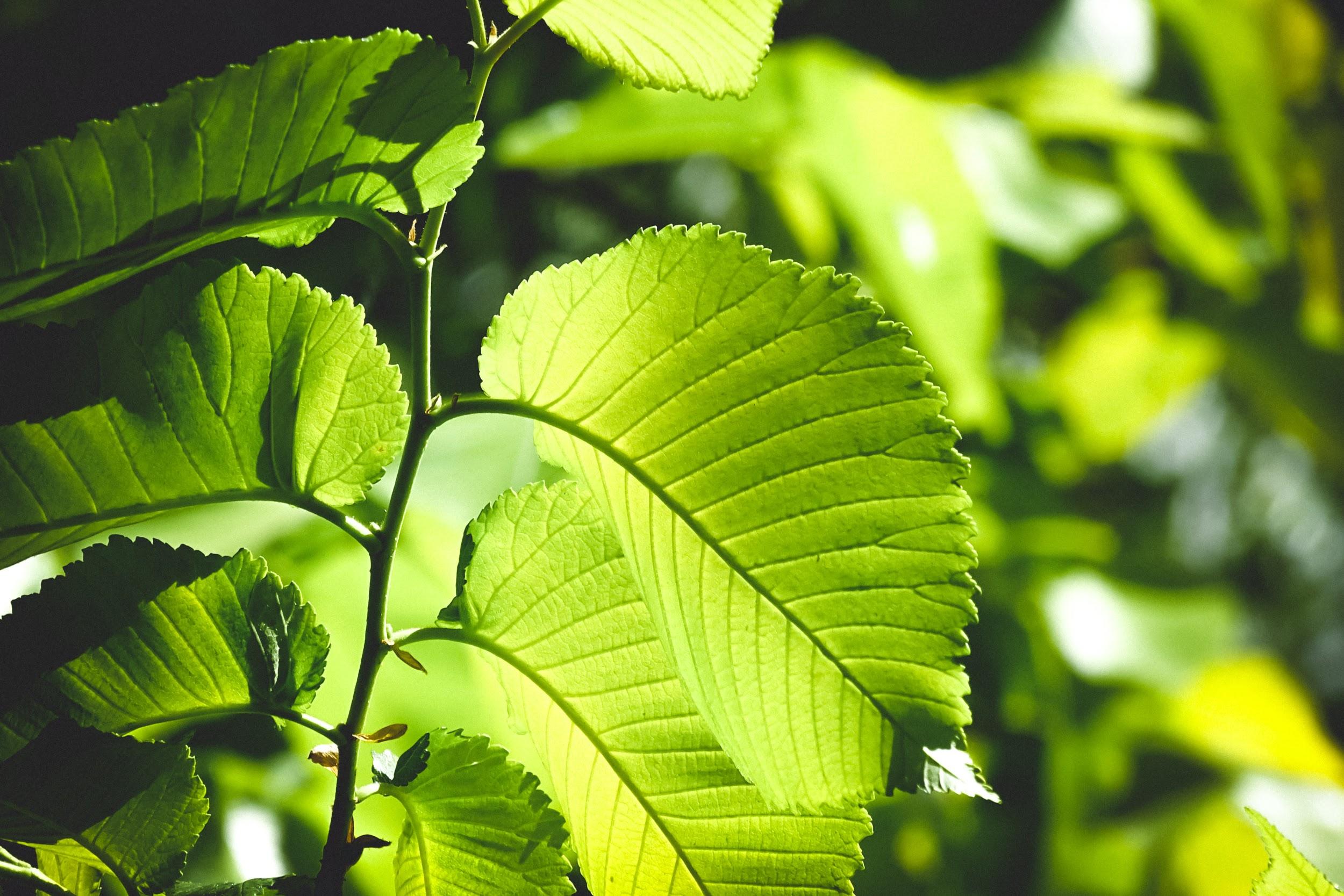 The importance of photosynthesis is not just that it can capture sunlight’s energy. Photosynthesis is vital because it provides a way to capture the energy from solar radiation (the “photo-” part) and store that energy in the carbon-carbon bonds of glucose (the “-synthesis” part). Glucose is the main energy source that animals and humans use to power the synthesis of . ATP is the energy-containing molecule found in the cells of all animals and humans. Energy from the foods we eat is captured in ATP and used to fuel the workload of cells.1

The energy stored in carbohydrate molecules from photosynthesis passes through the food chain. Consider a predator, such as a wolf, preying on a deer. The wolf is at the end of an energy path that went from atoms colliding on the surface of the sun, to visible light, to photosynthesis, to vegetation, to the deer, and finally to the wolf. The wolf, by feeding on the deer, receives a portion of the energy that originated in the photosynthetic vegetation that the deer consumed.

Our food supply is also directly linked to photosynthesis. Major grocery stores in the United States are organized into departments, such as dairy, meats, produce, bread, cereals, and so forth. Each aisle contains hundreds, if not thousands, of different products for customers to buy and consume. Although there is a large variety, each item ultimately can be linked back to photosynthesis. Meat and dairy link because the animals were fed plant-based foods. The breads, cereals, and pastas come largely from starchy grains, which are the seeds of photosynthesis-dependent plants. What about desserts and drinks? All of these products contain sugar—sucrose is a plant product, a carbohydrate molecule, which is also derived from photosynthesis. Many items are less obviously derived from plants: virtually every spice and flavoring in the spice aisle was produced by a plant as a leaf, root, bark, flower, fruit, or stem. (Salt is a notable exception.) Ultimately, photosynthesis connects to every meal and every food a person consumes.

Main Structures and Summary of Photosynthesis

Photosynthesis generally takes place in the leaves of plants. It is a multi-step process that requires sunlight, carbon dioxide (CO2, found in the air), and water (H2O, from the soil). After the process is complete, the plant releases oxygen into the air (O2, essential for many living organisms) and produces the simple carbohydrate molecule of glucose, which can be used as an energy source by the plant, converted to starch and stored for a later energy source, or converted into other organic molecules such as fats, proteins and vitamins. This glucose contains the energy that all living organisms need to survive. 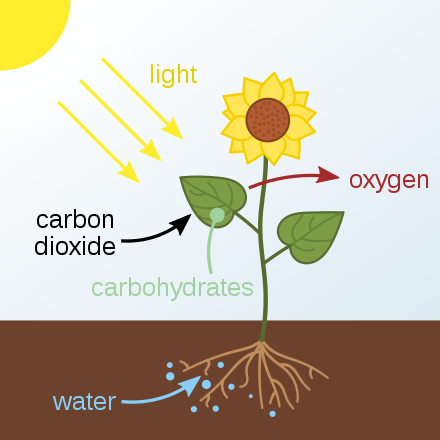 Figure 3.5. Depiction of photosynthesis in plants. The carbohydrates produced are stored in or used by the plant.

The basic formula for photosynthesis is as follows:

Starch is the storage form of glucose in plants, stored in seeds, roots, and tubers for later use as an energy source for the plant to reproduce. When a seed is buried deep in the soil, this starch can be broken down into glucose to be used for energy for the seed to sprout. As the seed sprouts, and shoots go above the ground and leaves start to form, the new plant can then photosynthesize glucose for an energy source. When we eat foods that contain starch, we must digest that starch down into single sugars (glucose) in order for the glucose to be absorbed into the intestinal cells, where it will enter the bloodstream to be carried to all cells of the body to use as an energy source. The basic process of digestion of these foods will be covered in the next section.

All living things require energy to survive. For humans, and many other organisms, that energy is generated by the complex interaction of photosynthesis and . Cellular respiration is a key pathway in  (the process of converting food into energy) of all aerobic organisms. refers to breathing: taking in oxygen and removing carbon dioxide. But ultimately, the reason we need to breathe is to provide the oxygen needed to carry out cellular respiration in our cells and to remove the carbon dioxide that is produced as a byproduct. 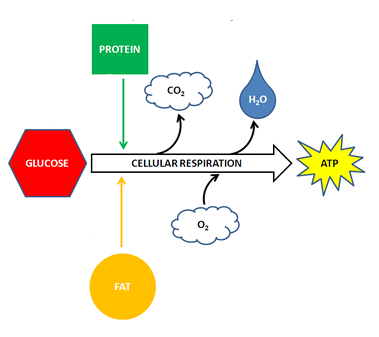 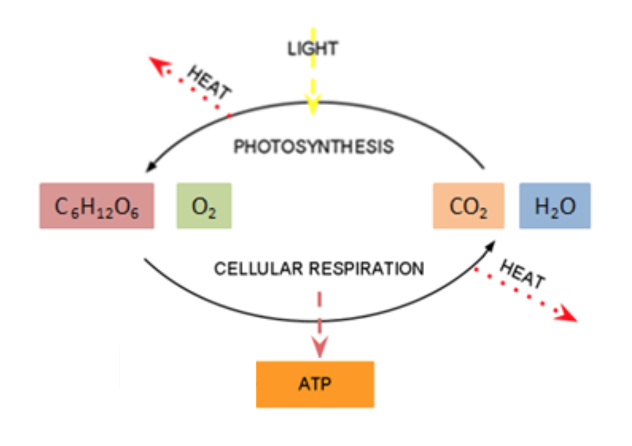 Figure 3.7. The relationship between the reactions of photosynthesis and cellular respiration. 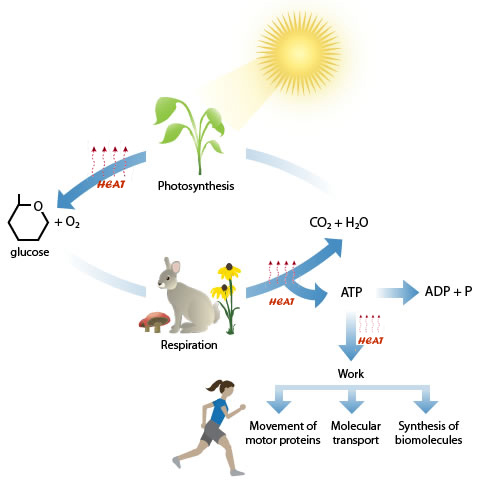 A biological process that captures energy originating from sunlight and converts it to glucose that all organisms use to power daily functions.

The energy-containing molecule found in the cells of all animals and humans; powers cellular work.

A key pathway of energy metabolism occurring in cells of aerobic organisms; results in the production of ATP.

The process of converting food into energy.