Dogs don’t have either the TYRP1 gene or the MC1R gene – they have both. In fact, every dog will have two copies of the TYRP1 gene and two copies of the MC1R gene. Since both genes control aspects of coat color, it makes sense that they interact. In fact, TYRP1 and MC1R have what is called an epistatic relationship: the action of one gene controls the expression of a second gene. Another way to phrase this relationship is that the effect of one gene is dependent on another gene.

Remember that TYRP1 is required for the production of eumelanin. The dominant allele of TYRP1 (B) produces black eumelanin, while the recessive allele (b) produces brown eumelanin.  However, if a dog is homozygous recessive for MC1R (ee), they lack the ability to produce eumelanin at all. If no eumelanin is being produced, it doesn’t matter whether it would have been black or brown: there is none. This means that any dog that is homozygous recessive for MC1R will appear yellow regardless of its genotype at TYRP1. These two genes are epistatic: the action of MC1R controls the expression of TYRP1. The effect of TYRP1 is dependent on MC1R.

A pedigree can be used to show the inheritance of two different genes such as TYRP1 and MC1R.

Individuals who have albinism lack the ability to produce any pigment. If no pigment is being produced, the color that the pigment would have been is unimportant. The effect of the pigment genes is controlled by the gene that allows pigment to be produced. This is an example of epistasis.

Albinism can occur in humans (see the section on TYRP1) as well as other animals, such as the squirrel seen below. 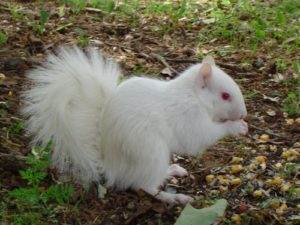