Skip to content
Micropigs are tiny, genetically-edited pigs that have recently been developed by a Chinese genomics institute (Li, 2014). The Chinese scientists used a technique called TALENs to edit the genome of pig cells (Figure 1). Each cell inside a pig contains two copies of the growth hormone receptor gene: one from each of its parents. The TALENs technique was used to delete one of the two copies of this gene. 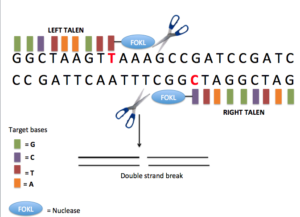 Figure 1 General overview of the TALEN process. The left and right TALEN bind to a specific sequence of genomic DNA inside the nucleus of a cell. When they are correctly bound, nuclease enzymes (represented by scissors) cut the genomic DNA. The TALEN sequences can be edited by scientists to target different DNA sequences in the genome. (Photo credit: Ogletreerd, Wikimedia.

Growth hormone (GH) stimulates the growth of essentially all tissues within the body. GH is a 191 amino acid peptide (protein) hormone which is produced from the GH gene. Cells sense the presence of GH protein hormone with the growth hormone receptor (GHR) protein on the outside of the cell. GHR protein is produced from the GHR gene and is found on the cell membrane on the outside of cells.
The GHR protein has three major parts:

The extracellular region binds (attaches) to GH, fitting together like a lock and its key. The binding of growth hormone transmits signals through the cell membrane to the intracellular region of the receptor (Figure 2). These signals “turn on” genes involved in growth and metabolism so that those genes are made into proteins. These proteins stimulate the growth and division of other cells in the organism.