Mendel’s results in crossing peas, black vs brown fur color, and eumelanin production vs pheomelanin production all demonstrate traits are inherited as dominant and recessive. This contradicts the historical view that offspring always exhibited a blend of their parents’ traits. However, sometimes heterozygote phenotype is intermediate between the two parents. For example, in the snapdragon, Antirrhinum majus (Figure 1), a cross between a homozygous parent with white flowers (CWCW) and a homozygous parent with red flowers (CRCR) will produce offspring with pink flowers (CRCW) (Figure 2).

Note that different genotypic abbreviations are used to distinguish these patterns from simple dominance and recessiveness. The abbreviation CW  can be read as “at the flower color gene (C), the white allele is present.”

This pattern of inheritance is described as incomplete dominance, meaning that neither of the alleles is completely dominant over the other: both alleles can be seen at the same time. The allele for red flowers is incompletely dominant over the allele for white flowers. Red + white = pink. The results of a cross where the alleles are incompletely dominant can still be predicted, just as with complete dominant and recessive crosses. Figure 3 shows the results from a cross between two heterozygous individuals: CRCW x CRCW . The expected offspring would have the genotypic ratio 1 CRCR:2 CRCW:1 CWCW, and the phenotypic ratio would be 1:2:1 for red:pink:white. The basis for the intermediate color in the heterozygote is simply that the pigment produced by the red allele (anthocyanin) is diluted in the heterozygote and therefore appears pink because of the white background of the flower petals.

Another example of incomplete dominance is the inheritance of straight, wavy, and curly hair in dogs. The KRT71 gene is used to synthesize the keratin 71 protein. Genes in the KRT family provide instructions for making proteins called keratins. Keratins are a group of tough, fibrous proteins that form the structural framework of epithelial cells, which are cells that line the surfaces and cavities of the body. Epithelial cells make up tissues such as the hair, skin, and nails. These cells also line the internal organs and are an important part of many glands.

Keratins are best known for providing strength and resilience to cells that form the hair, skin, and nails. These proteins allow tissues to resist damage from friction and minor trauma, such as rubbing and scratching. Keratins are also involved in several other critical cell functions, including cell movement (migration), regulation of cell size, cell growth and division (proliferation), wound healing, and transport of materials within cells. Different combinations of keratin proteins are found in different tissues.

The mutation which causes curly hair in dogs, such as the labradoodle seen in Figure 23, is in exon 2 of the gene and is predicted to substantially disrupt the structure of the keratin 71 protein (Cadieu, 2009). This change in protein shape prevents the keratin proteins from interacting together correctly within the hair, altering the structure of the hair and resulting in a curly coat (Runkel, 2006).

When a dog has two curly alleles (KCKC), it has a very curly coat, such as on the poodle in Figure 5. A dog with two straight alleles (K+K+) has a straight coat. Dogs that are heterozygous (K+KC) have an intermediate or wavy coat like the labradoodle in Figure 4.

Blood is classified into different groups according to the presence or absence of molecules called antigens on the surface of every red blood cell in a person’s body. Antigens determine blood type and can either be proteins or complexes of sugar molecules (polysaccharides). The genes in the blood group antigen family provide instructions for making antigen proteins. Blood group antigen proteins serve a variety of functions within the cell membrane of red blood cells. These protein functions include transporting other proteins and molecules into and out of the cell, maintaining cell structure, attaching to other cells and molecules, and participating in chemical reactions.

There are 29 recognized blood groups, most involving only one gene. Variations (polymorphisms) within the genes that determine blood group give rise to the different antigens for a particular blood group protein. For example, changes in a few DNA building blocks (nucleotides) in the ABO gene give rise to the A, B, and O blood types of the ABO blood group. The changes that occur in the genes that determine blood group typically affect only blood type and are not associated with adverse health conditions, although exceptions do occur. 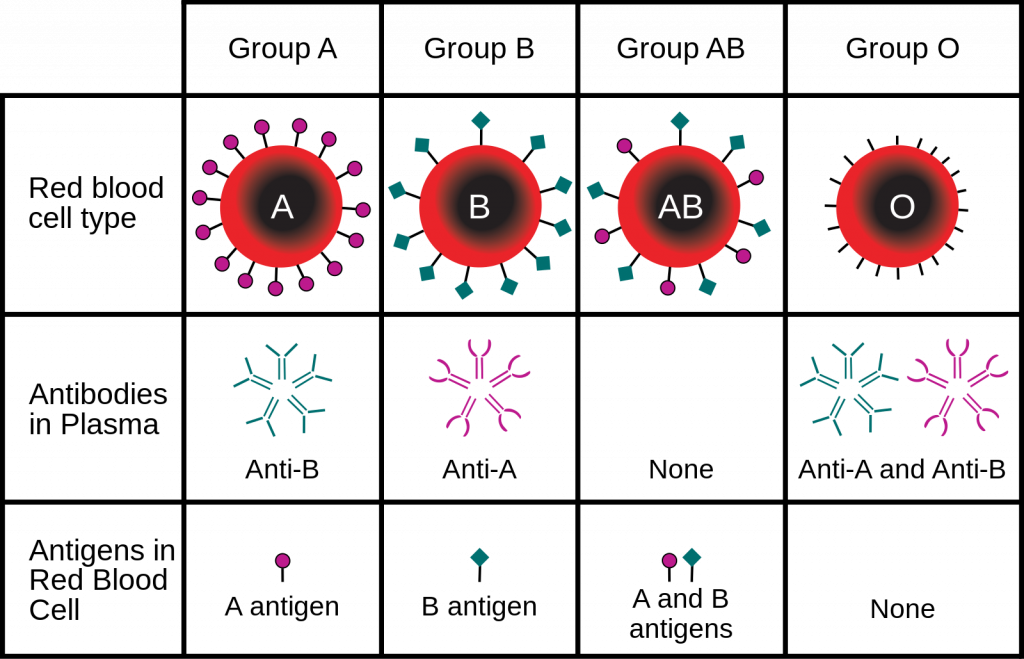 “Keratins” by Genetics Home Reference: Your Guide to Understanding Genetic Conditions, National Institutes of Health: U.S> National Library of Medicine is in the Public Domain