Mendel’s studies in pea plants implied that the sum of an individual’s phenotype was controlled by genes (or as he called them, unit factors), such that every characteristic was distinctly and completely controlled by a single gene. In fact, single observable characteristics are almost always under the influence of multiple genes (each with two or more alleles) acting in unison. For example, at least eight genes contribute to eye color in humans.

In some cases, several genes can contribute to aspects of a common phenotype without their gene products ever directly interacting. In the case of organ development, for instance, genes may be expressed sequentially, with each gene adding to the complexity and specificity of the organ. Genes may function in complementary or synergistic fashions, such that two or more genes expressed simultaneously affect a phenotype. An apparent example of this occurs with human skin color, which appears to involve the action of at least three (and probably more) genes. Cases in which inheritance for a characteristic like skin color or human height depend on the combined effects of numerous genes are called polygenic inheritance.

Genes may also oppose each other, with one gene suppressing the expression of another. In epistasis, the interaction between genes is antagonistic, such that one gene masks or interferes with the expression of another. “Epistasis” is a word composed of Greek roots meaning “standing upon.” The alleles that are being masked or silenced are said to be hypostatic to the epistatic alleles that are doing the masking. Often the biochemical basis of epistasis is a gene pathway in which expression of one gene is dependent on the function of a gene that precedes or follows it in the pathway.

An example of epistasis is pigmentation in mice. The wild-type coat color, agouti (AA) is dominant to solid-colored fur (aa). However, a separate gene C, when present as the recessive homozygote (cc), negates any expression of pigment from the A gene and results in an albino mouse (Figure 18). Therefore, the genotypes AAcc, Aacc, and aacc all produce the same albino phenotype. A cross between heterozygotes for both genes (AaCc x AaCc) would generate offspring with a phenotypic ratio of 9 agouti:3 black:4 albino (Figure 18). In this case, the C gene is epistatic to the A gene. 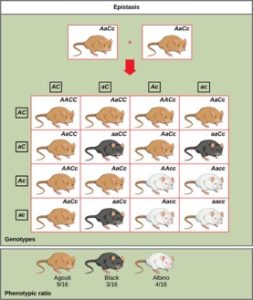