When you do to lift an object and then release it, the energy converts back to as the object falls. This process appears similar to the storage and release of elastic that we learned about in the previous unit and suggests that we define a (

). It’s not obvious where gravitational  potential energy is stored, but for our purposes can treat it as being stored within the system comprised of the Earth and an object that has been raised. The ,  and are forms of .  Forces and corresponding that convert mechanical energy from one form to another are known as and . We introduce these new terms because there are many cases when only conservative forces are acting and so energy just transfers between the various forms of within the system. For such cases, any increase in potential energy is offset by a decease in kinetic energy and vice versa, so we know

. do that converts between , , or (we will learn more about chemical potential energy soon). , , ,  forces caused by muscular contractions, and any forces applied by materials as they are permanently deformed are examples of non-conservative forces.

Check out this simulation, which shows how energy is transferred among different types. 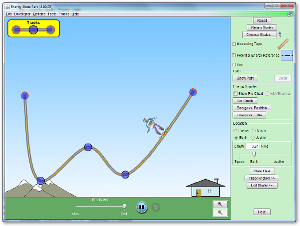 Considering the ,  we expect that any change to the total energy of a system must be provided by  work on the system from the outside (

).  Our observations have confirmed this expectation and are summarized by the :

According to the , if we do to lift an object farther from the Earth without increasing its or we must have increased the gravitational potential energy by the same amount as the work. The we need to apply is the object’s , or (

. Therefore the we did was:

and this must be the same the amount that we have changed the gravitational potential energy.

Note that the previous equation automatically gives a decrease in gravitational potential energy when an object gets lower because the change in height will be negative. The work done to lift an object is an example of , or work done by the body on the external environment.[1]

A rock climber is 3.5 m above their last anchor point and fall. They will fall back 3.5 m back to the anchor point and then another 3.5 m below it before the rope comes tight for a total fall distance of 7.0 m (there was 3.5 m of  rope out when they fell, so they will have to end up hanging by 3.5 m of rope). Neglecting , how fast will they be moving when the rope begins to come tight?

We will apply the during the fall.

Neglecting there  are no forces other than on the person during the fall, so only are acting and we know is ):

Next we write out the changes in each type of energy:

We recognize the initial was zero at the start of the fall and that we can divide every term in our equation by mass to cancel it out:

Then we isolate the speed:

Finally we take the square root:

The climber fell 7.0 m, so the change in height was actually -7.0 m. We are ready to calculate the final speed:

energy stored in the deformation of a material

the sum of potential and kinetic energy

forces that do non-conservative work, which is work that does not transfer energy only among kinetic and potential forms (mechanical energy)

the net work on a system must be equal to the sum of the changes in kinetic, potential, and thermal energies