The Energetic Functions of the Body[1]

All bodily functions, from thinking to lifting weights, require energy. The many small muscle actions accompanying all quiet activity, from sleeping to head scratching, ultimately become thermal energy, as do less visible muscle actions by the heart, lungs, and digestive tract. The rate at which the body uses food energy to sustain life and to do different activities is called the metabolic rate. The total energy conversion rate of a person at rest is called the basal metabolic rate (BMR) and is divided among various systems in the body, as shown the following table:

The largest fraction of energy goes to the liver and spleen, with the brain coming next.  About 75% of the calories burned in a day go into these basic functions. A full 25% of all basal metabolic energy consumed by the body is used to maintain electrical potentials in all living cells. (Nerve cells use this electrical potential in nerve impulses.) This bioelectrical energy ultimately becomes mostly thermal energy, but some is utilized to power chemical processes such as in the kidneys and liver, and in fat production. The BMR is a function of age, gender, total body weight, and amount of muscle mass (which burns more calories than body fat). Athletes have a greater BMR due to this last factor.  Of course, during vigorous exercise, the energy consumption of the skeletal muscles and heart increase markedly. The following diagram summarizes the basic energetic functioning in the human body.

The First Law of Thermodynamics

). When heat is transferred out of the body to the environment, we say call this , as indicated in the previous figure.  We will learn more about how temperature and heat transfer are related in the next unit.

The states that energy cannot be created or destroyed. Therefore, if the body does useful work to transfer to its surroundings (

), or transfer to the environment as , then that energy must have come out of the body’s . We observe this throughout nature as the :

The of the human body in converting into is known as the of the body.  We often calculate the body’s mechanical efficiency, as a percentage:

The mechanical efficiency of the body is limited because energy used for metabolic processes cannot be used to do useful work. Additional  generated during the chemical reactions that power muscle contractions along with in joints and other tissues reduces the efficiency of humans even further.[2].

“Alas, our bodies are not 100 % efficient at converting food energy into mechanical output. But at about 25 % efficiency, we’re surprisingly good considering that most cars are around 20 %, and that an Iowa cornfield is only about 1.5 % efficient at converting incoming sunlight into chemical [potential energy] storage.”  [3]For an excellent discussion of human and comparisons with other machines and fuel sources, see MPG of a Human by Tom Murphy, the source of the previous quote.

Assuming a 20% in climbing stairs, how much does your decrease when a 65 kg person climbs a 15 m high flight of stairs? How much does the person transfer to the environment as ?

First, lets calculate the change in :

The used came out of the person’s so:

We can use the to find the thermal energy exhausted by the person:

We find that the heat is negative, which makes sense because the person exhausts thermal energy out of the body and into to the environment while climbing the stairs.

Alternatively, we could have known right off that the must be 4/5 of the total loss of , because only 1/5 went into doing useful . So the exhaust heat should be:

For historical reasons we often measure and in units of (cal) instead of .  There are 4.184 Joules per calorie. We measure stored in food with units of 1000 calories, or kilocalories (kcal) and we sometimes write kilocalories as Calories (Cal) with with capital C instead of a lowercase c. For example, a bagel with 350 Cal has 350 kcal, or 350,000 cal. Converting to Joules, that would be

What fraction of a bagel would you need to eat in order to make up for the 47,775 J  loss of internal energy (as ) that we calculated in the previous everyday example about climbing stairs?

Therefore we need to eat:

Conservation of Mass and of Energy

In the previous examples we assumed stated that our mechanical efficiency when climbing stairs was 20%. Let’s use the data in the above table to verify that assumption. The data in the table is for a 76 kg person climbing 116 stairs per minute. Let’s calculate the rate at which that person did mechanical work while climbing stairs and compare that rate at which they used up internal energy (originally from food).

The minimum standard step height in the US is 6.0 inches[4] (0.15 m) then the gravitational potential energy of a 76 kg person will increase by 130 J with each step, as calculated below:

When climbing 116 stairs per minute the rate of energy use, or power, will then be:

According to our data table the body uses 685 W to climb stairs at this rate. Let’s calculate the efficiency:

As a percentage, this person is 32% mechanically efficient when climbing stairs. We may have underestimated in the previous examples when we assumed a 20% efficiency for stair climbing.

We often talk about “burning” calories in order to lose weight,  but what does that really mean scientifically?. First, we really we mean lose because that is the measure of how much stuff is in our bodies and weight depends on where you are (it’s different on the moon). Second, our bodies can’t just interchange and — they aren’t the same physical quantity and don’t even have the same units. So how do we actually lose mass by exercising? We don’t actually shed the atoms and molecules that make up body tissues like fat by “burning” them. Instead, we break down the fat molecules into smaller molecules and then break bonds within those molecules to release , which we eventually convert to and .  The atoms and smaller molecules that resulting from breaking the bonds combine to form carbon dioxide and water vapor (CO2 and H2O) and we breath them out. We also excrete a bit as H2O in sweat and urine. The process is similar to burning wood in campfire — in the end you have much less  of ash than you did original wood. Where did the rest of the mass go? Into the air as CO2 and H2O. The same is true for the fuel burned by your car. For more on this concept see the first video below. The really amazing fact is that your body completes this chemical process without the excessive temperatures associated with burning wood or fuel, which would damage your tissues. The body’s trick is to use enzymes, which are highly specialized molecules that act as catalysts to improve the speed and of chemical reactions, as described and animated in the beginning of the second video below.

Similar to the body , the efficiency of any energetic process can be described as the amount of energy converted from the input form to the desired form divided by the original input amount. The following chart outlines the efficiencies of various systems at converting energy various forms. The chart does not account for the cost, hazard risk, or environmental impact associated with the required fuel, construction, maintenance, and by-products of each system. 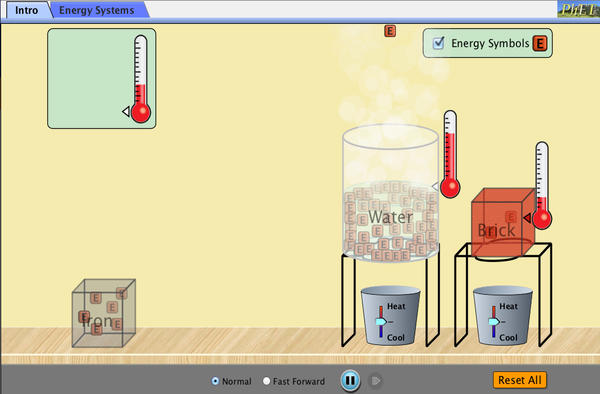 the total of a systems thermal energy and chemical potential energy, the total energy stored microscopically within the system

the sum of potential and kinetic energy

the process of burning, the rapid chemical combination of a substance with oxygen, involving the production of heat and light

unit of energy equivalent to 4.184 Joules

A quantity representing the capacity of an object or system to do work.