Crumple zones built into modern cars also serve the purpose of reducing force by increasing the collision time and minimizing bounce. Crumple zones cause cars to be totaled more often, but cars can be replaced and people can’t be. Notice that the presenter in the previous video isn’t talking about or , but he does keep mentioning absorbing . This energy that he is claiming will be absorbed by the crumple zone is the energy stored in the motion of the car. Any moving object has this type of energy, known as (KE). The amount of kinetic energy an object has depends on its and its :

Notice that the depends on , but not because KE doesn’t have a direction (an object can’t have negative KE). Even if we input a negative velocity into the KE equation, it gets squared so KE would come out positive anyway. The unit of kinetic energy is a Nm, which has it own name, the  (J).

If the car had bounced back at the same that it had entering the collision, then the final would be the same as the initial, and we would say that kinetic energy had been . Collisions that conserve kinetic energy are known as . Collisions that don’t are known as . In the previous chapter we learned that bounce was bad when it comes to minimizing the force on the body during a collision. The purpose of crumple zones is to ensure that very little of the kinetic energy remains after the collision by making them very inelastic.  The key to accomplishing that is to ensure that kinetic energy is transferred into thermal energy instead of elastic potential energy by designing the materials to break instead of bounce.

If you watch the video carefully, you see that the car was moving forward, then for a moment it was stopped and thus had zero , and then it was moving backward (though not as fast), so once again it had kinetic energy.  Some of the original kinetic energy was stored as elastic potential energy and then released as kinetic energy again, but most of it was not. If you are wondering where that energy went, then you are was very perceptive, because in fact the tells us that energy cannot be created or destroyed, only transferred from one form to another and/or one object to another, via .

Now that we have introduced as a new type of , we will reverse course and say that thermal energy is not actually a new type of energy, but rather just on a microscopic scale. Thermal energy is the energy stored in the motion of atoms and molecules that make up a material. Transferring thermal energy to a system really just means that you caused it’s atoms and molecules to move faster. The work done in compressing objects past their and the work done by will always transfer some energy into thermal energy.  You can visualize this microscopic process for kinetic friction using the simulation below. 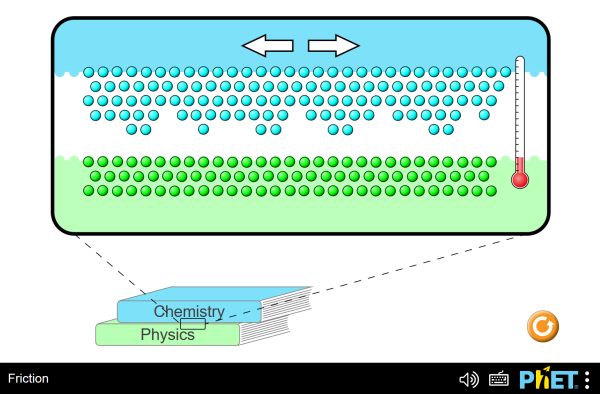 The relative elasticity of collisions is defined by the (COR) which relates the final kinetic energy and the initial kinetic energy. For a moving object striking a stationary object that doesn’t move, as in the crumple zone video, the COR is calculated as final divided by initial speed.

Check out this simulation that allows you to visualize different types of collisions.

the combined effect of mass and velocity, defined as mass multiplied by velocity

A quantity representing the capacity of an object or system to do work.

a system of physical units ( SI units ) based on the meter, kilogram, second, ampere, kelvin, candela, and mole

reduction in size caused by application of compressive forces (opposing forces applied inward to the object).

a collision for which kinetic energy is not conserved

the maximum stress a material can withstand

a force that resists the sliding motion between two surfaces

the fraction of relative velocity remaining after a collision, for collision with a stationary object equal to the ratio of final speed to initial speed